Kelly Joan Whitmer’s research explores the intersection of history of science with the history of youth culture, education, religion and emotion in the early modern world.  She is particularly interested in the history of collecting and observational practices, visual and material culture and forms of social experimentation c. 1500 to 1800.  Dr. Whitmer offers a wide range of courses at Sewanee, including an introduction to the history of children and childhood, survey courses on the Renaissance, Reformation(s) and Enlightenment, also seminars on “Monsters, Marvels and Museums” and “Nature, Magic and Machines” in early modern Europe. 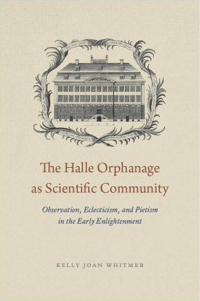 ‌In her book, The Halle Orphanage as Scientific Community:  Observation, Eclecticism and Pietism in the Early Enlightenment, (Chicago: University of Chicago Press, c2015), Whitmer makes a powerful case for the importance of Halle’s Orphanage (founded c. 1700) as a key institutional venue for the pursuit of collaborative scientific research.  She shows how the Orphanage’s ability to serve as a kind of academy hinged on its promotion of philosophical eclecticism as a tool for assimilating perspectives and becoming an able observer. Dr. Whitmer received support from Sewanee’s Faculty Development Fund and a Faculty Fellowship from the Appalachian College Association to finish this project. The Orphanage, its collections and Whitmer's research were recently featured in an H-Ideas Blog focused on premodern Universities.

Before arriving at Sewanee, Dr. Whitmer was a postdoctoral fellow at the Max Planck Institute for the History of Science in Berlin and won a Fulbright fellowship to carry out her research in Germany. More recently she held a Herzog-Ernst Fellowship (funded by the Fritz Thyssen Stiftung) at the Forschungszentrum Gotha (FZG) Universität Erfurt and was a visiting fellow at the Herzog August Bibliothek Wolfenbüttel, thanks to the support of the Marbach Weimar Wolfenbüttel Forschungsverbund (MWW). She is currently working on a book about ideas of usefulness, educational reform and innovation in the early modern world.

Early Modern Europe, Germany
History of Science and Technology; Scientific Observation, Collecting and the History of the Museum
History of Children and Youth
History of Education
The University of the South