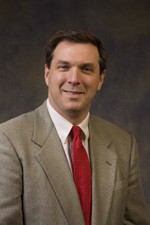 Alexander M. Bruce, class of 1989, returned to Sewanee in 2008 as Associate Dean of Students; he now serves as the Associate Dean of the College for Undergraduate Academic Affairs. Having earned both an MA and Ph.D. in English (focusing on Old and Middle English languages and literatures) from The University of Georgia, he teaches Anglo-Saxon Language and Literature, Arthurian Legend, and is an occasional lecturer in the Humanities program. Bruce has taught as an English professor at Florida Southern College (Lakeland, Fla.), where he also served as Assistant Dean of Academic Affairs, and at The University of Montevallo (Montevallo, Ala.), where he served as Chair of the Department of English and Foreign Languages. A dedicated and eclectic scholar, he has published two books (Scyld and Scef: Expanding the Analogues [Routledge, 2002]) and The Folklore of Florida Southern College [Aventine, 2003]) and more than fifteen essays (and has presented more than fifty conference papers) on a wide range of topics including medieval studies, student development, linguistics, folklore, pedagogy, the works of J.R.R. Tolkien, and Tennessee history.