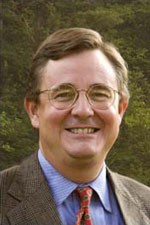 Professor of English and Director of the School of LettersB.A., Vanderbilt University; M.A., Ph.D., University of Virginia

John Grammer has taught classes in British and American Literature, American Studies, and Sewanee’s interdisciplinary Humanities Program. His academic research principally concerns the literature and intellectual history of the U.S. South, from the age of Thomas Jefferson to the present.

Born and raised in Texas, Professor Grammer received his B.A. at Vanderbilt University and his Ph.D. at the University of Virginia. He has taught classes in British and American Literature, American Studies, and Sewanee’s interdisciplinary Humanities Program.

Grammer's 1996 book Pastoral and Politics in the Old South won the C. Hugh Holman Award as the best book of the year in Southern literary study. His essays and reviews have appeared in American Literary History, The Southern Literary Journal, The Sewanee Review and other journals, and in such books as The Dictionary of Literary Biography, The Encyclopedia of Southern Culture, and Blackwell's Guide to the Literature and Culture of the American South. Formerly chair of the English Department and Director of the Sewanee School of Letters, Grammer now directs Sewanee’s Mellon-funded program in Southern Studies.