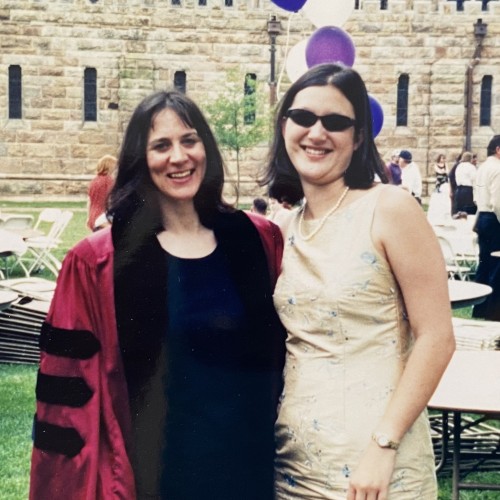 Julie Berebitsky and Jessica Osaki at Osaki's graduation in 2002

Jessica Osaki and her husband, Houston Howell, both class of 2002, have just made a lead gift to create an endowment for the Julie Berebitsky Prize, which will be established to honor the graduating senior who writes the best senior thesis in the Women’s and Gender Studies Program. When endowed, the prize will be a fitting legacy for the recently retired Berebitsky, who was instrumental in creating the Women’s and Gender Studies Program. “I was in the first class with the women’s studies concentration, as it was first known,” says Osaki. “Julie's classes were filled with these incredible voices that challenged us to consider the construct that is gender. Those voices she elevated have become amplified through all of us who took her classes. It was devastating to me that future students would not get the benefit of her voice and those she brought to the classroom, but I hope through this gift there is an opportunity to celebrate and amplify a rising voice in this vital ongoing discourse.”

Thanks to Osaki, Howell, and several other donors, over half of the required funding to establish an endowment has been raised, and the University is hoping others will step forward to provide the rest of the funding in honor of Berebitsky.

“Houston and I always make our decisions for gifts together,” says Osaki, “and this was just something we both thought was important, not just at Sewanee but in our world. Women’s studies helps people look at gender issues and expand them, frame them, and understand them better.”

One way a women’s studies perspective manifested in Osaki’s life was in a discussion she and Howell had when they were contemplating marriage. “We were actually at the Fiji house, and we were talking about whether or not I would take his name after we married. I said, ‘Well, if I have to change my name, you do, too.’ So for a while we had hyphenated names. That framing and that negotiation would not have happened that way had I not had Julie as a part of my educational experience at Sewanee.”

Osaki arrived at Sewanee in the late 1990s as one of the few students from California and one of an even smaller handful of Asian American students. Eric Benjamin ran a mentor program for multicultural students and matched Osaki with Berebitsky, who became an important mentor during Osaki’s time at Sewanee. Early on, she also took a women’s studies class.

“I came from a girls’ high school in Los Angeles,” she says, “so coming to Sewanee was an unusual path for someone from my school. But I saw this women’s studies class and saw the professor was also from California, and I thought, ‘OK, I can make this work.’” While generous scholarships brought Osaki to the heterogeneous culture of late 20th-century Sewanee, good mentoring—as well as meeting her future husband as a sophomore and connecting with a group of friends—kept her on the Mountain.

After graduation in 2002, Osaki leveraged her experience as a student worker in Sewanee’s Annual Fund office to get a job with Blackbaud, headquartered in Charleston, South Carolina. Blackbaud is an industry leader in providing customer relations products for a variety of organizations to conduct fundraising, and Osaki found that she was very well prepared to talk with customers in need. Since then, Osaki has worked for several nonprofits, both directly and as a consultant for Blackbaud, and she earned an M.Ed. and an MBA from Vanderbilt. “I have a passion for social impact from the perspective of managing nonprofit organizations. After all, they are businesses, too, and need good management.”

Eventually, life led Osaki, Howell, and their three “southern-born” children back to California, with Osaki taking a job at Google and Howell working remotely for his law firm in Nashville, where he practices real estate law with a focus on affordable housing. “It’s an interesting path from art history major to Google manager,” says Osaki, “but it makes more sense than you would think. As an art historian, you look at a piece of art in front of you, and you think about all the different information and motivations and techniques that led to its creation. You have to think about both the details of the problem and the effect of the whole. That kind of thinking lends itself to success in a corporate environment, as well.”

To find out more how to contribute to the Julie Berebitsky Prize Endowment, please contact Terri Williams at this link.