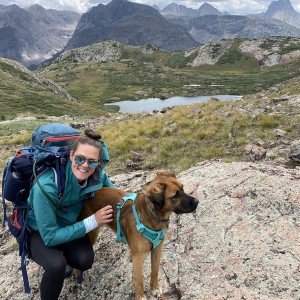 With 120 new Cornerstone Scholarships, 33 New Cornerstone internships, and increased giving to the School of Theology, the 2021 Sewanee Fund campaign came to a successful conclusion on June 30. “We are all in this together,” said Eloise Repeczky, C’11, whose class won the award for highest class participation among recent alumni. One key to the success of the Sewanee Fund was in the many people who volunteered on class gift committees. “The secret to our success as a class is that people have been trying to check in on one another,” said Eloise Repeczky, whose Class of 2011 won the award for highest participation for the second straight year.  “Whatever has happened, we are all in this together,” added Repeczky, who spent many hours over the past year communicating with classmates, following them on social media, and writing personal notes of encouragement. “As class chair, I wanted my classmates to know that Sewanee cares about them, and I did what I could to represent that caring.”

To learn more about a solid year for the Sewanee Fund and the people who joined together to support today's students, click here.

"We don't have lucky beavers in our class," says Jock Tonissen, C'70. Instead, the class has continued to build a cohesive community that supports Sewanee year after year.

A lead gift from Charles and Katherine Christy Israel, both C'95, started an avalanche of giving to honor a Sewanee legend, Dixon Myers, on his retirement from Sewanee.

Earl Shores, C'76, has been a longstanding contributor to Sewanee—almost every year since his graduation. His story is distinctive: one of Sewanee's first Black students, a spouse of an employee, a resident of the Village, and a transfer student. Shores has crafted a life and always kept Sewanee in his thoughts.

As a professor of biology, Henrietta Croom enjoyed working with students on expanding the frontiers of knowledge. Through a charitable remainder Unitrust, she plans to provide support for undergraduate research as part of her estate.

Tim McLarty, C'89, recently achieved a dream of establishing an endowment at Sewanee through a gift of appreciated stocks. He was motivated by his family's tradition of giving, which he wishes to extend.

In 2017, the print version of IMPACT included a story about longtime friend and former Regent Maria Campbell who had disclosed an unrestricted bequest to the School of Theology. to recognize her passing, we want to remember her story in this e-version of IMPACT.

For nearly a decade, the School of Theology has brought seminarians into a living and learning community that provides them significant scholarships and the opportunity to enrich their seminary experience through community. Foundation and church grants have made possible this critical program.

With the retirement of Julie Berebitsky, Jessica Osaki, C'02, and her husband, Houston Howell, C'02, made a first gift to establish a Berebitsky Prize.

Warren, C'86, and Leslie Douthit Coleman, C'88, are convinced that a diversifying Sewanee will ensure its health in the 21st century. Read more about how this couple's professional lives inspired them to support their alma mater at an important turning point in its history.

Hellen Wainaina, C'18, was inspired by the story of Ruth Saloman Engel, for whom a scholarship has been established that benefits students from within 100 miles of Sewanee.

When St. Alban's Church in Tucson, Arizona, realized new revenue from lease fees for a cell tower on its campus, the church decided to ramp up its already ambitious outreach program, with the School of Theology as one of its beneficiaries.

The Gavin Moore, C’93, Pavilion is a testament to the power of friendships and to the effect a particular friend had on those who knew him at Sewanee and beyond. More than 140 such friends have contributed to a uniquely Sewanee project, a pavilion in Lost Cove that bears his name and alludes to a Sewanee nickname, “The Flash.”

In the late 1970s, Paul Erwin, C’79, and Terri Taylor, C’79, were part of a closeknit group who performed folk songs at the Outside Inn and launched a lifetime of friendship—the Cumberland Nine. In 2005, that friendship was cut tragically short when Taylor died suddenly. Now Erwin has established the Terri Taylor Cornerstone Scholarship to remember his friend, who was “always thinking to do for others.”

An administrative mentor for EfM (Education for Ministry) at St. Andrew’s Episcopal Church in Birmingham, Gerald Wildes has recently made an estate commitment to Edward O. DeBary Program Development, an endowment established in honor of an early director of  EfM. “As a single man with no children, I wanted to leave a legacy for a program that made an important impact on my life,” says Wildes.

Bob Gaines, C’60, has a great way of remembering his annual gift to Sewanee: he makes that gift on his birthday. Over the years, he has supported the Sewanee Fund, several class projects launched by his class of 1960, for which he is class president, and the German Department and Das Deutsches Haus. A German minor, he has Gaines is a tireless advocate for Sewanee and has led a life full of travel, good friendships, and fellowships.

While neither Anne nor Claude Stuart attended Sewanee, their connection with the town and such important alumni as Duncan Gray Jr. and William Alexander Percy is intergenerational. Strong believers in education, the Stuarts have established a new endowment for students from their native Greenville, Mississippi.

Roma Lenehan, C’85, is a naturalist and nonprofit leader in her native Madison, Wisconsin. And, she is a passionate birder, an avocation that she developed while a Sewanee leader. Hers is not just a “big year” but a big life. This civic leader is a generous Sewanee Fund donor. “I give to Sewanee to give back, to help other students, and to help Sewanee to be the wonderful place I experienced,” she says.

In January, Sam Kern, C’19, was on campus to talk with students at the annual Beyond the Gates event. A Bonner Leader and a Carey Fellow at Sewanee, Sam donated his travel expenses to Sewanee. His work as a consultant is an example of the kind of public interest technology this issue of Impact has featured. People like Sam give hope for the future.

Chris McDonough is the inaugural Alderson-Tillinghast Chair of the Humanities. He is a great choice, having been chair of the interdisciplinary humanities program and also having created excellent interdisciplinary project-based opportunities for students such as the Mine 21 film and the great Sewanee Tapestry Project.

The endowment, which will  support the professional development for many faculty, was established by Edwin Alderson, C'62, and named for Alderson and his classmate and friend, Richard Tillinghast.