A multi-year grant to archaeologist Sarah Sherwood is helping the National Park Service preserve one of the most significant archaeological sites in the Southeast. In the process, she is extending the opportunity for collaborative research to students over the course of the grant. Read more about the project and how it has helped Sewanee students. 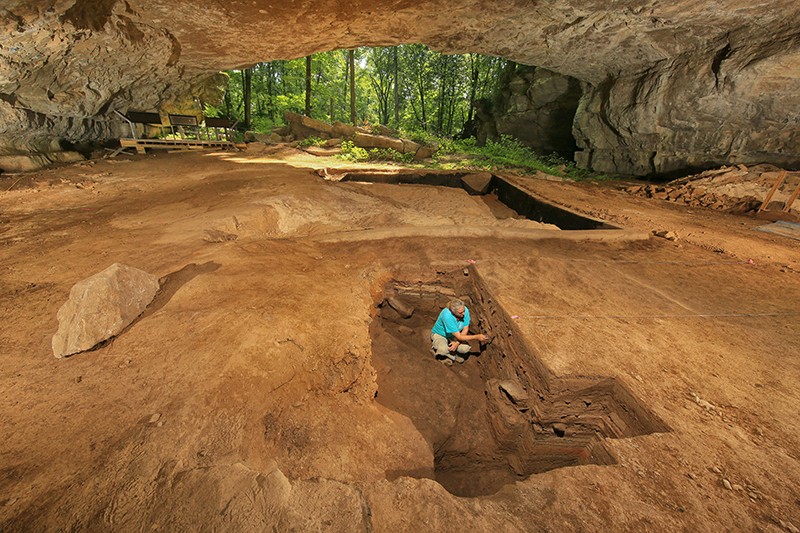 Grant to Archaeologist Yields new Understanding of the Pre-Colonial Southeast

Sarah Sherwood is finishing up a multi-year project with the National Park Service Cooperative Ecosystems Studies Unit award, in which she worked collaboratively with students and archaeologists from other universities to conduct research at Russell Cave National Monument. The project was launched by the National Park Service as a response to subsidence at the site, which threatens what the park service bills as “the oldest house in America.” Russell Cave, at the base of the plateau near Orme, Tennessee, is the site of significant human occupation over the last 8,500 years. It is one of the oldest, most complete records of human habitation in the Southeast.

According to Sherwood, the subsidence at the site is the result of a combination of factors—increased water flow due to climate change and upstream disturbances (such as timber and rock harvests), as well as mistakes made by previous archaeologists when the site was opened in the 1950s and 1960s.

One of the project’s objectives was to try to track down everything that had previously been found and documented from excavations in the past. “The material is curated in a variety of places,” says Sherwood, “and the documentation in a lot of instances is not where the material is, which makes study difficult.” With contributions from Jane Millar, C’15, the project developed a searchable database.

In addition, Sherwood led students to complete a small test excavation within the cave and another excavation outside the cave near Dry Creek, which runs through the site.

“We made some pretty significant discoveries that help indicate how much more the cave can teach us,” says 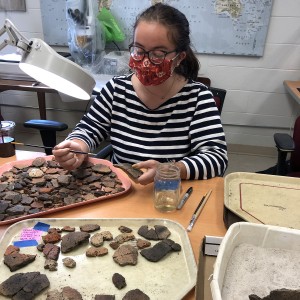 Sherwood. “The soil chemistry in the cave helps preserve animal bone, and we found a number of bone tools.” The project also found a new style of pottery, and two students, Alexis McKnight, C’22, and Rebecca Dorward, C’23, are working this year on analyzing it. McKnight is trying to refit sherds so researchers can look at larger sections and understand the vessel forms, and Dorward is examining the decorative patterns and reproducing them on paper.

Other researchers are doing specialized chemistry analysis and plant analysis in order to learn much more about the lives of the people who lived at the cave.

While the project is finishing up, in many ways it may be only a first step. For half a century or more, the Russell Cave site has been a rich source of information about some of the first inhabitants on the North American continent. Sherwood’s study has contributed to our understanding of the cave’s inhabitants, and has helped the Park Service learn more about how it will address the threats to this critical site.

Rachel Alvarez, C’22, Alexis McKnight, C’22, and Rebecca Dorward, C’23, have been helping Dr. Sarah Sherwood work on aspects of the project concerning ancient pottery, and debris from making stone tools, both found in abundance at the Russell Cave National Monument, one of the early living spaces in the American Southeast, on the Tennessee border with Alabama. A unique variant of the Pickwick pottery type was found on this site, and these three Sewanee students have been helping Dr. Sherwood with specific parts of the project. “We all found out about this project because it is part of our minor in Archaeology,” Rachel says. “This particular project was part of my research study grade, so I reached out to Dr. Sherwood, and I began to help her in the lab.”

Rachel had the opportunity to work on this project in the summer by actually being on-site at Russell Cave. “The site itself is really cool; they used to have this big walkway through which I was able to go inside the cave and look at everything. It is really interesting because they have reopened part of the old excavation area inside the cave where you can see the different layers of habitation.” 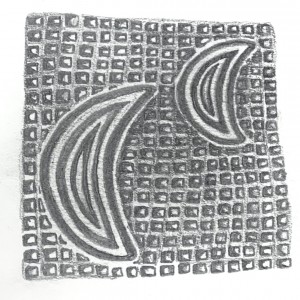 Rebecca has aided Dr. Sherwood with recreating the pattern of a sample of pottery found. “It was difficult and tedious work, as I kept trying to find a pattern, but it turned out to be a simple stamp that would have been carved into a wooden paddle and then repeated over and over again,” she says. Alexis, on the other hand, was in charge of putting the pieces of the pottery together. “It was like building a puzzle and it did take a bit, but it was enjoyable,” she comments.

“This is an ongoing project, as the pattern of this Pickwick Type Variant has never been seen before, so currently we are looking to get the pottery examined by other archaeologists to confirm its uniqueness. Dr. Sherwood has asked us to write a paper about it, so we will,” says Rebecca regarding the future of this project. Currently, all three students have plans to continue helping Dr. Sherwood with this project.