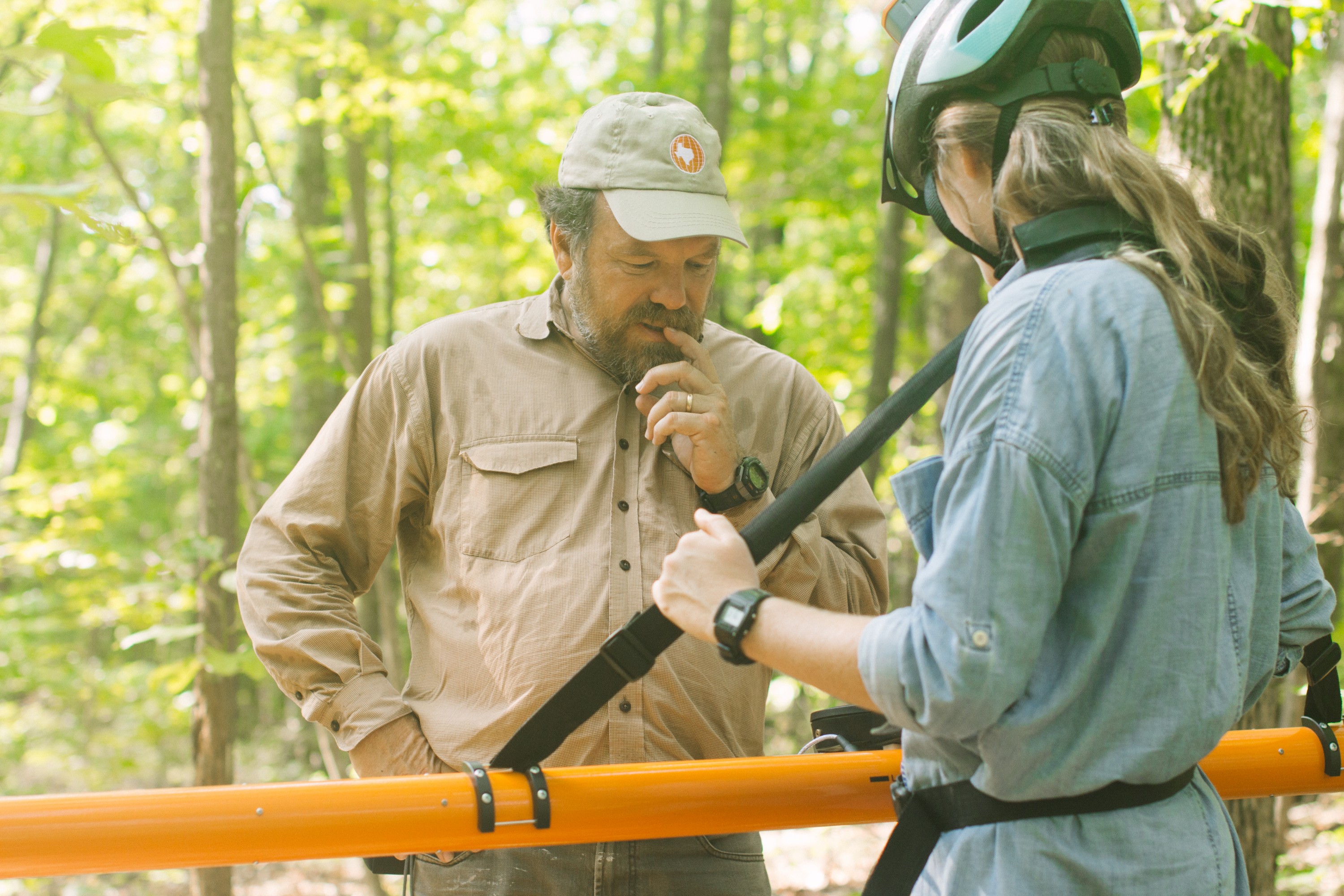 When people think about Sewanee and its impressive Domain, they often envision expansive forests, remote caves, sprawling bluff views, and eye-catching water features. It’s true that Sewanee boasts all of these things—but the Domain 3D project is interested in something that’s been, until now, inaccessible: what’s under our feet. Deep under our feet.

Dr. Jeff Paine, senior research scientist with the Bureau of Economic Geology (BEG) at the University of Texas at Austin, and Lucie Costard, a research scientist associate at the BEG, traveled to Sewanee in early September as a part of the collaborative efforts of both Sewanee and the University of Texas to work toward assembling a profile of what lies hundreds of feet beneath Sewanee’s vast Domain.

Paine, Costard, and Sewanee faculty, staff, and students began by meeting at the University Farm to set up and test instruments, and to teach students how to acquire data. With a Ground Conductivity Meter (GCM) that spans more than 10 feet in length, the farm, free of trees, seemed like the perfect testing area. Exploring the potential for the equipment was one of the central goals of this initial trip, explained Sarah Sherwood, associate professor and co-chair for the Department of Earth and Environmental Systems at Sewanee.

Paine’s visit was long-awaited. Paine explained that, three or four years ago, the Bureau of Economic Geology was contacted by individuals at Sewanee who hoped to initiate a collaboration, though how this would work and what instruments they would use was unclear. Out of much discussion and many different suggestions (from a seismic survey of the campus to drilling a core hundreds of feet deep), it was ultimately decided that UT Austin and Sewanee would begin by compiling a comprehensive overview of the shallow geophysics within the Domain. (The Environmental and Engineering Geophysical Society defines geophysics as “the non-invasive investigation of subsurface conditions in the Earth through measuring, analyzing, and interpreting physical fields at the surface.”)

Paine explained the benefits of this shallower focus as opposed to some of the other options: “It’s a bit more hands-on; you can get students involved, and you don’t have to hire a contractor to just go and collect data.” Martin Knoll, professor of geology at Sewanee, explained that the scope of this project would span much more than just an investigation into the shallower geophysics of the Domain, however. Eventually, the Domain 3D project hopes to assemble a seismic profile that, Knoll states, would “look several thousands of feet below the surface.”

Paine and Costard began by looking at specific areas of interest on the Domain. Among them: the natural wetlands that Professor Kristen Cecala in the Biology Department is researching, a contaminant plume that Knoll has been studying since 1996 (where a gas station once leaked gas decades ago), and an intriguing site with abnormally thick soil—the Borrow Pit.

Sewanee’s central campus is covered in thin soils, and punctuated by instances of exposed bedrock, so the Borrow Pit (with soil 17 feet deep or more) is of particular interest. And Paine’s team is essential towards gaining a better understanding of this unusual soil. Using traditional drilling methods is comparatively tedious and inefficient. With the imaging that is created by pulling the Ground Penetrating Radar (GPR) over sites, though, members of the 3D Domain project can non-invasively explore the subsurface and discover the extent of the soil.

Sherwood and Professor of Forestry Scott Torreano hope to use the data yielded by these geophysical instruments to gain a better idea about the recent geologic history of the local landscape.

Discussing the Borrow Pit, Sherwood said that “deep soil like that, thick soil like that, is just unheard of around here. So no one understands the environment in which it formed.”

Sherwood explained that it is likely that one layer of soil at the Borrow Pit was wind-derived, though aeolian (wind-derived) deposits are usually found much closer to major rivers, like along the banks of the Mississippi.

“But to have it this far from a major river? We’re not sure exactly what the source is,” remarked Sherwood. “It’s pretty thick, so we have no idea, really, what the source is. The shallow geophysics allow us to distinguish between the two parent soils: residual soils formed in bedrock and the upper unit formed in wind-transported sediments.”

When Torreano invited the state soil scientist to see the Borrow Pit soil, he hadn’t a clue what to make of it. Finally understanding how the soil in the Borrow Pit formed with the help of Paine, then, will be a key step towards shaping a better understanding of the Domain’s depositional history.

“It could tell a complex story of the last couple million years of the surface of an area that we haven’t been able to decipher otherwise.” Sherwood explained that, while the forests that carpet the Domain may seem pristine—they aren’t. Decades ago, these same tracts of land were farmed and logged repeatedly. And this led to the erosion of soils on the Domain. “So to get an idea of what the original history of this landscape was is a little more challenging, and this tool [the GPR] helps us do that,” said Sherwood.

Knoll and Sherwood both expressed their excitement for possible future projects. “One thing that we would like to be able to do,” started Knoll, “is to work down in Lost Cove. It would be nice to be able to see caves in the subsurface.” And Sherwood imagines that an archaeological collaboration might be a possibility later on, too: Costard's expertise is in applying geophysics in archaeological investigations.

Until future projects begin to take shape, though, many students are enjoying a very unique and rare opportunity in working with Paine. The fact that intro geology students had the opportunity to collect data with the equipment Paine brought to Sewanee, as Knoll says, is “pretty sweet. Those kids can say, ‘my first two weeks at Sewanee, I used geophysical equipment to look at the subsurface.’”

And the highly specialized equipment isn’t cheap. This is one of the reasons that Paine is so interested in collaborating with other institutions; he wants to share the expertise and tools available at UT Austin with other schools that might not be able to independently support a program as specialized as Paine’s.

For Paine and Costard, who have done research on diverse geoscience topics in North America, Europe, and Asia, Sewanee's Domain represents a new and intriguing challenge thanks to its topographic and geographic variety, its sheer size, and its situation on the Cumberland Plateau.

With the work that Paine, Sherwood, Knoll, and others are conducting, perhaps when people think about Sewanee we will envision not just the expanses of lush forest, but also consider the complexities of what lies, unsuspected, beneath our feet.