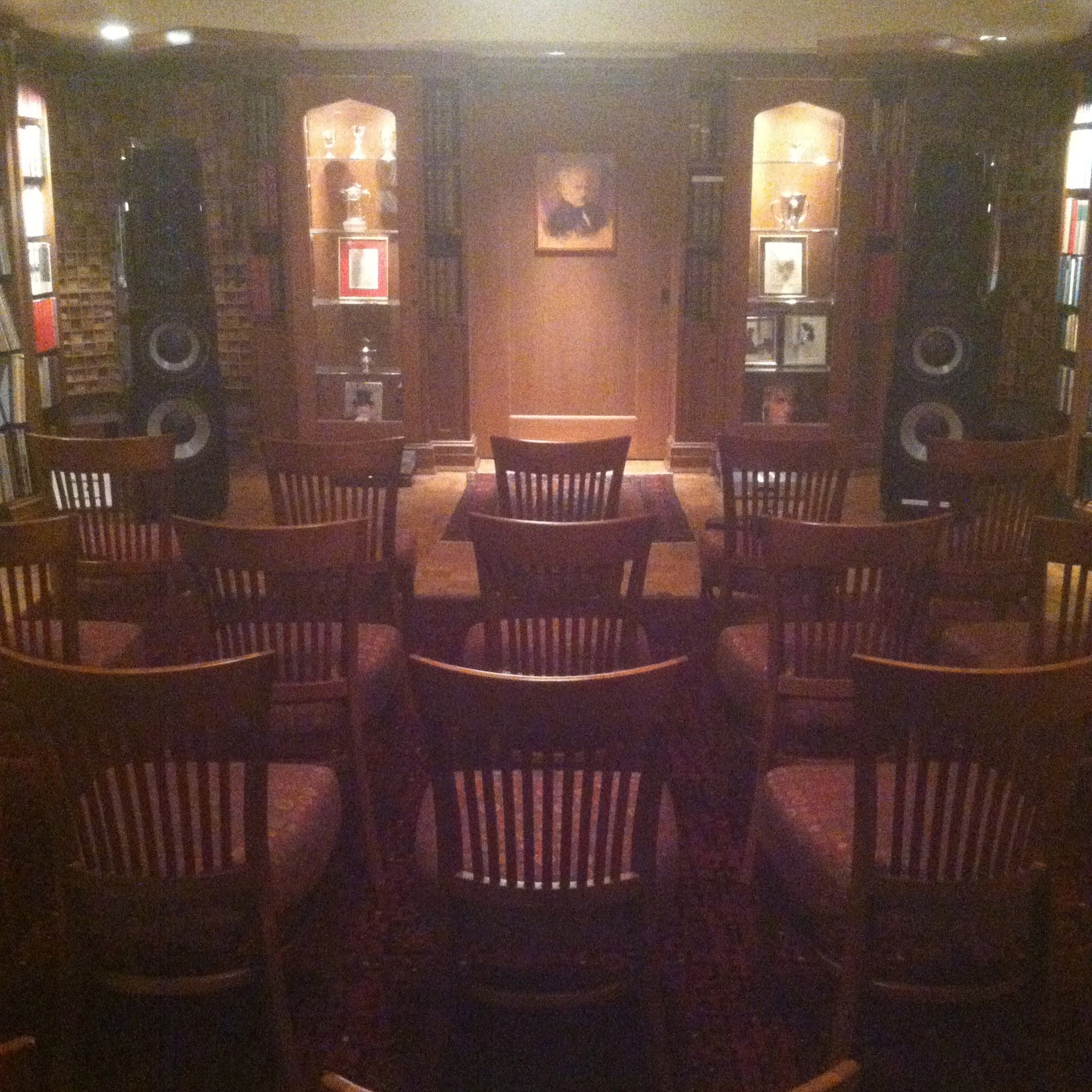 What if I told you there was a place that was designed for the sole purpose of listening to vinyl records and hi-def digital recordings? Not just some hobbyist’s mancave, but a place where every single aspect of the room is designed with acoustics in mind. When I say every aspect I mean that even the way the concrete was poured during construction of the room was done so in a way to make the room more acoustically pleasing. This is a place where not only the chairs themselves, but the position of each chair within the room is meticulously designed and decided upon so as to accommodate the most pristine listening experience. What is this place you ask? Heaven? Nay it is but The William Ralston Listening Library at The University of the South in Sewanee, Tennessee.

As part of my Cross Country Songbook journey I had the distinct pleasure of visiting the Ralston Library and basking in all of its audio glory earlier this week. I set up an appointment with one of the library’s curators and experts, a former Sewanee student named Ryan Currie who was incredibly knowledgeable about the room, the equipment, and the collection of music housed there. Ryan explained how the collection of over 16,000 vinyl records was donated primarily by two former University English professors– Father William Ralston and Charles Harrison, with the former contributing nearly 80% of the aforementioned 16,000 records and the latter about 15% of the total collection. He also detailed how a current University English professor, Tam Carlson, spearheaded the private fundraising efforts to actually build the room and hire audio and design consultants to create the unrivaled listening experience that Ralston and Harrison dreamed of when they left their respective collections to the school.

After learning about the history of the room it was time to take the equipment for a spin. I was a bit overwhelmed by the selection of music at my disposal, so I asked Ryan if he could make any recommendations for a good starting point. Since the majority of the vinyl collection is classical music, Ryan chose a recording of Mozart’s Requiem to start things off. What I heard as soon as the needle dropped was simply astounding. Even though there were only two stacks of speakers positioned at the front of the room, I could hear the music coming at me from all directions. It was startling at first and a bit of a mind game since I expected the sound to come only from the direction where I saw the actual speakers, but that’s far from the case in a room like the Ralston Library. This sensation was what Ryan described as a “shimmer and dispersion effect” created by the paneling within the room which results in aural waterfall flowing around you from all angles.

Once I adjusted to the auditory experience I discussed the library’s contemporary collection with Ryan and made a few selections of my own to listen to. Here are the songs that we explored:

The Beatles – “I Want You (She’s So Heavy)”
I started off my selections with one of my favorite Beatles tunes and the speakers in the Ralston Library breathed a whole new life into the song for me, mostly due to the intensity of Lennon’s lead guitar line and how sinister, and frankly frightening, these speakers made it sound.

James Blake – “The Wilhelm Scream”
The intricacy of this recording, and specifically the panning of its different sounds, was highly intensified through the room’s speakers. It felt almost as if the sounds were bouncing and darting across every crevice of the room and not just existing in the two speakers that were in front of me.

Radiohead – “Bodysnatchers” + “Videotape”
Everyone knows how much care and effort that Radiohead puts into their recording process and when you listen to their music in a million dollar listening room you appreciate the band’s thoughtful approach to the recording process that much more.

Duke Ellington – “It Don’t Mean A Thing (If It Ain’t Got That Swing)”
Even though this selection was recorded live at Carnegie Hall in the ’40s it still sounded incredible to hear that big band sound on this system even if the original recording wasn’t the greatest quality.

London Symphony Orchestra – “Star Wars Main Theme”
When I saw this vinyl hanging out in the soundtrack section of the collection I just had to do it, and oh am I glad I did. I don’t think that I have ever heard a recorded brass section sound so crisp and so present in my life.

Jimi Hendrix – “Are You Experienced”
Yes Jimi, after sitting in that room for two hours I certainly am.

If you ever find yourself even remotely near Sewanee, Tennessee I cannot stress enough how highly I recommend setting up an appointment to visit the Ralston Listening Library. It’s unlike anything I’ve ever experienced and may well lead to me maxing out a ridiculous amount of credit cards to finance a similar setup for my Brooklyn apartment. A kid can dream right?