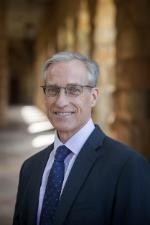 After twenty years as a faculty member in the Politics Department and Asian Studies Program, Scott Wilson entered the university's administration where he currently serves as vice provost. As vice provost he is responsible for strategic planning, academic relations with other institutions, and assists with the budget. In 1985, he studied abroad in China, just as it was opening up its economy and society, and was so taken by the experience that he made Chinese politics and economy the focus of his research. He has lived in China for more than six years, mainly to conduct research including living in two Chinese villages for ten months. He has published two books titled Remade in China: Foreign Investors and Institutional Change in China (Oxford, 2009) and Tigers Without Teeth: The Pursuit of Justice in China (Rowman and Littlefield, 2015) and ten articles and book chapters, all on China. In 2014-15, he received a Fulbright research award to conduct research at the Research Institute on Environmental Law at Wuhan University’s Law School. During that time, he continued his study of citizen participation in Chinese environmental governance. His research and teaching have focused on China’s engagement with the global economy and citizens’ pursuit of their legal rights in China. In recent summers, Professor Deborah McGrath (Biology) and he led groups of students to conduct research on China’s environmental protection efforts. His current research focuses on environmental lawsuits and governance in China. When not working, Scott enjoys spending time with his family, running Sewanee’s trails, and cooking.