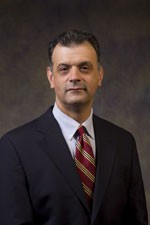 Christopher M. McDonough holds the Alderson-Tillinghast Chair in the Humanities. He teaches a wide range of courses at Sewanee, including Latin language and literature, mythology, literature in translation, and Classics in Cinema. He has been chair of both the Department of Classical Languages and Interdisciplinary Humanities Program.

Before coming to Sewanee in 2002, McDonough taught at Boston College, Princeton University, Harvard Divinity School, and the University of North Carolina at Greensboro.