The University of the South holds three ceremonies to mark commencement weekend on the Mountain.

See photos from the weekend. Watch video from Baccalaureate and Commencement.

A Convocation for the Conferring of Degrees was held in All Saints’ Chapel on Friday, May 10, to graduate 31 seminarians from the School of Theology with a variety of degrees and honors. Honorary degrees were presented to the Rev. Canon Gideon Byamugisha, an Anglican priest in Uganda active in HIV/Aids related issues; the Rt. Rev. Maria Griselda Delgado, first woman bishop to serve the Diocese of Cuba; the Rev. Canon George Frederick Dettwiller II, canon for special projects for the Diocese of Tennessee; and the Rt. Rev. Carl Walter Wright, bishop suffragan for Armed Forces and Federal Ministries of the Episcopal Church. In addition to receiving his honorary degree, Wright preached during the commencement service.

"You have started down the path less traveled by”: the Class of '19 attends Baccalaureate

The second of the weekend ceremonies began under overcast skies and the sound of the Bentley bells Saturday morning, May 11, as the members of the class of 2019 followed the University faculty—and valedictorian Thomas Shaifer Jones and salutatorian Sean Rowan Halloran—into the Baccalaureate Service in All Saints’ Chapel. Overflow seating and large screens in the Quad accommodated family and community members after the Chapel was filled. 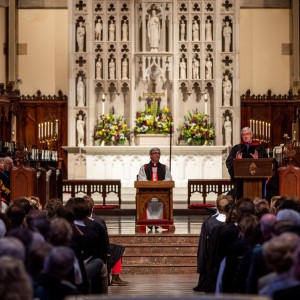 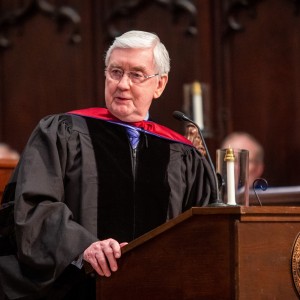 Seffrin delivered the Baccalaureate address, telling the graduates that by choosing to complete their studies and join the small percentage of the world’s adults to have a degree, they will have choices and opportunities for their lives. This gift brings responsibilities as well. He told the class that they have the opportunity to become extraordinary, to turn “what is” into “what should be.” Seffrin asked them to consider three things: choose to be an agent of change; commit to something bigger than self; and choose to play, as work as well as at leisure. He closed with lines from Robert Frost’s “Two Tramps in Mud Time,” which he said expressed his personal philosophy:

But yield who will to their separation,
My object in living is to unite
My avocation and my vocation
As my two eyes make one in sight.
Only where love and need are one,
And the work is play for mortal stakes,
Is the deed ever really done
For Heaven and the future's sakes.

Following Baccalaureate was the initiation into Phi Beta Kappa of 15 members of the Class of 2019. Twenty-four members of the class were elected earlier in the academic year.

The Convocation for Conferring of Degrees for the College of Arts and Sciences and the School of Letters took place Sunday, May 12, in front of Sewanee’s largest-ever commencement gathering. The Convocation was held in All Saints’ Chapel and diplomas were presented on the Quadrangle. The entire Convocation was shown on closed-circuit TV on the Quad and despite the threat of drizzle, proud families filled the space. An overflow crowd watched the ceremony in Guerry Auditorium.

Sean Rowan Halloran, a biochemistry major from Jacksonville, Florida, gave the traditional salutatory in Latin, addressing the vice-chancellor, faculty, and the audience before concluding with the University motto “Ecce Quam Bonum.” 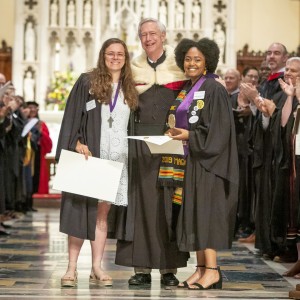 The provost then asked Eunice Nyambura Muchemi and Mary Margaret Murdock to come forward to receive the 2019 Algernon Sydney Sullivan Medallion for character, leadership, and service to the University and the Sewanee community. Muchemi, from Maryland, and Murdock, from Alabama, received loud applause, cheers, and a standing ovation from the faculty, their classmates, and the audience in the Quad as Vice-Chancellor John McCardell presented the awards. 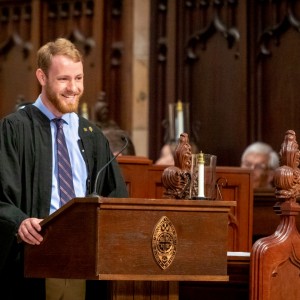 In his valedictory address, Thomas Shaifer Jones, a biology and Spanish double major from Decatur, Georgia, recalled seeing a shooting star during a recent evening spent at Lake Cheston with friends. His Sewanee experience was full of “shooting star moments,” he said—moments that pass almost too quickly to recognize but linger in memory like the fading silver streak of a meteor. He urged his classmates to cherish their own shooting star moments as they move through life; they will continue to learn from the small experiences that streak by.

And this our life, exempt from public haunt,
Finds tongues in trees, books in the running brooks,
Sermons in stones, and good in everything.
I would not change it.

He concluded by asking the graduates to weave together lives filled with purpose, lives that they may look back on and proclaim, “I would not change it.” Read Jones's address.

Before reading the University's charge to the "chosen and now honored youths," Vice-Chancellor John McCardell spoke to the graduates. He spoke of being surrounded by memories in All Saints’ Chapel, in the memorials on the walls, and in our hearts. But he warned against memory lapsing into nostalgia, and the temptation to measure the present against an idealized past.

Drawing from Wordsworth, McCardell asked the class to use the power of memory to nourish, renovate, and enable them through a lifetime of highs and lows:

There are in our existence spots of time,
That with distinct pre-eminence retain
A renovating virtue, whence …
… our minds / Are nourished and invisibly repaired 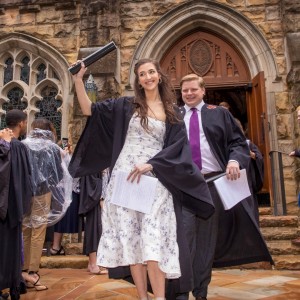 The final event in a full graduation weekend came to a close with the singing of Alma Mater and the bells of the Leonidas Polk Memorial Carillon ringing down on the traditional recessional, which took the new graduates of the Class of 2019 through the faculty lining the sidewalk outside the Chapel and into an outpouring of applause and cheers. The graduates, families, and guests mingled and the joyful chaos of celebration continued into the afternoon on the Mountain.