The University Baccalaureate service—the second of three Commencement weekend ceremonies—will be held Saturday morning, May 11, in All Saints’ Chapel.

Five honorary degrees will be presented during the service, to Roger W. Ferguson Jr., president and chief executive officer of TIAA and former vice chairman of the U.S. Federal Reserve Board of Governors; R.F. “Roy” Foster, emeritus professor of Irish history at Oxford and professor of Irish history and literature at Queen Mary University of London; 25-year veteran of America’s space missions Matthew Golombek, a senior research scientist at the Jet Propulsion Laboratory; Sherry Magill, former president and executive director of the Jessie Ball duPont Fund; and Dr. John R. Seffrin, former chief executive of the American Cancer Society. More information about each recipient is below. 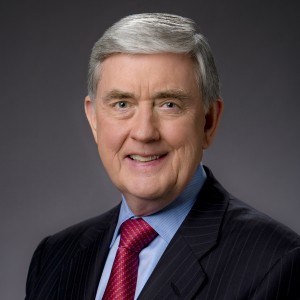 Seffrin will deliver the Baccalaureate address. Seffrin served as chief executive of the American Cancer Society from 1992 to 2015; he also led the Society’s nonpartisan advocacy affiliate, the American Cancer Society Cancer Action Network. Seffrin has served as professor of practice at the Indiana University School of Public Health-Bloomington. Among his many appointments, he served on the White House Advisory Group on Prevention, Health Promotion, and Integrative and Public Health; was appointed to the National Cancer Policy Board; and led the creation of the Campaign for Tobacco-Free Kids.

The initiation into Phi Beta Kappa of new members from the Class of 2019 will follow Baccalaureate. They will join the 24 members of the class elected earlier in the academic year.

Roger W. Ferguson Jr., is president and chief executive officer of TIAA, a leading provider of retirement services. He is the former vice chairman of the Board of Governors of the U.S. Federal Reserve System. As the only governor in Washington, D.C., on Sept. 11, 2001, he led the Fed’s initial response to the terrorist attacks, taking actions that kept the U.S. financial system functioning while reassuring the global financial community. He served on President Obama’s Council on Jobs and Competitiveness as well as its predecessor, the Economic Recovery Advisory Board.

Matthew Golombek is a senior research scientist at the Jet Propulsion Laboratory—NASA’s center for planetary exploration—and a 25-year veteran of America’s space missions to Mars. He is the project scientist of the Mars Exploration Rover mission, concluded in February 2019, and he led the landing site selection efforts for the InSight lander that touched down last November. His research focuses on Mars geology and the prediction of surface characteristics. He was the chief scientist for the Mars Pathfinder Mission, which successfully landed a spacecraft and rover on Mars in 1997.

Sherry Magill served from 1993 to 2018 as president and executive director of the Jessie Ball duPont Fund, a grant-making foundation in Jacksonville, Florida. While there, she spearheaded development of the Jessie Ball duPont Center, a nonprofit and philanthropic center. Prior to joining the Fund in 1991, Magill served as vice president at Washington College, a private liberal arts college in Maryland, where she also taught courses in American Studies. She has served as a senior moderator for the Aspen Institute and as chair of the Council on Foundations board, and is the founding executive director of the Wye Faculty Seminar, an enrichment program for professors at small colleges.