Bishop Roaf addresses Convocation: “I believe love is a verb, not a noun”

Winter Convocation was held Friday, Jan. 17, in All Saints' Chapel. New members of the Order of the Gown and many of their friends and families filled the Chapel at the start of a holiday weekend.

In addition, the Rt. Rev. Phoebe Roaf, bishop of the Diocese of Western Tennessee, received an honorary doctor of divinity degree and gave the Convocation address. Roaf is the first woman and first African American bishop in the 36-year history of the diocese.

Read more about all the honorary degree recipients. 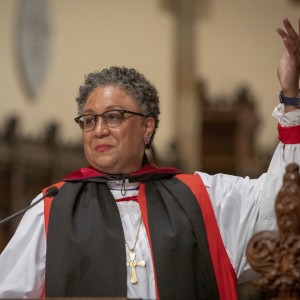 In her address, Bishop Roaf looked back at the history of African American education—and the struggle for education—in the U.S. During the era of slavery, Southern states passed laws prohibiting the education of African Americans. Roaf described the strategies black communities devised to transmit education, including house servants listening to the lessons of their masters’ children and then sharing that knowledge with others. Storytelling and the singing of spirituals were also means of teaching others, as black families emphasized the importance of learning.

Roaf asked what it means to uphold the traditions of the University of the South (as the new gownees pledge to do) in our days and time. The University was originally founded to support the slave economy, she said, and for approximately the first 100 years of its history neither women nor African Americans were admitted as students. Women and people of color have always been a part of Sewanee’s story and contributed to its success, though they were not always recognized here.

These challenging aspects of history are hard to acknowledge, Roaf admitted. She complimented the University and thanked the vice-chancellor for engaging in the difficult work of creating a community that both looks and feels different now. And she commended the Roberson Project for its efforts to be honest about Sewanee’s history. “I want to personally thank the vice-chancellor for all of his efforts to make Sewanee a place where everyone is truly welcomed and respected,” she said.

Roaf said that today’s students give her hope. She encouraged the students to continue to build bridges, so that in the future people will be able to talk about the actions this generation took to usher in a new era for the South. She concluded: “May God empower us to be compassionate and humble and persistent as we strive to be reconciled to all our brothers and sisters in this world.” Read the text of her address.

Following the address, President of the Order of the Gown Nellie Fagan presented 89 students to Vice-Chancellor McCardell to be awarded academic gowns. As the students were admitted into the Order by the vice-chancellor, professors, other students, and family members gowned the new members amid a burst of applause.

The Order of the Gown is an academic honor society and a unique student government body among U.S. colleges and universities. Since 1875 the Order of the Gown has remained the body responsible for maintaining the spirit, traditions, and ideals of the University of the South. The wearing of the gown is both a sign of academic achievement and a promise to continue the ideals and traditions of the University.

See photos from the day here. The video of the Convocation is here (use the menu to choose Winter Convocation 2020).