The first women entered Sewanee as full-time students in fall 1969, beginning sweeping changes in the College and the community.

In the late 1960s, the University of the South faced a perfect storm of circumstances that prompted a once-and-for-all decision that had been decades in the making. The College’s application pools had been growing smaller, so the idea of admitting women was taken up during a 1968 Board of Trustees meeting. Dodging some attempts to delay the discussion, the board successfully passed a resolution to allow women. 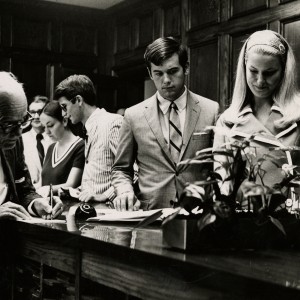 When the University of the South first admitted women as full-time first-year undergraduate students, Judith Ward Lineback (left) was the first to matriculate. She was one of the first women to enter Sewanee in fall 1969, beginning sweeping changes in the College and the community.

The arrival of the first wave of female undergraduates was met with a fair share of pettiness—in the form of editorials in the Purple—but for the most part, women in that first class of 82 female freshmen and 23 female transfer students report that matriculation was relatively trouble-free. Among the more trivial grumblings of returning male students were that women were ruining the tradition of Sewanee’s all-male choir and were wearing pants in the dining hall. But women students found ways to make lemonade out of the lemons—and while the infrastructure might have needed some work to catch up with the times, the women hit the ground running. 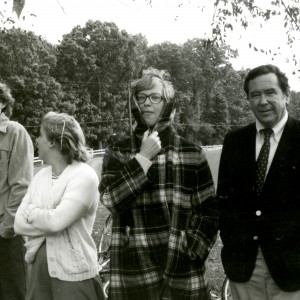 In 1973, Sewanee had its first female valedictorian (in the first year of their eligibility), followed quickly by a female editor of the Sewanee Purple (Class of 1974), and chair of the Honor Council (Class of 1975). Each of these “firsts” carried the University another step forward, and by 1984, women outnumbered men on campus. Sewanee women haven’t looked back since. They have claimed six Rhodes Scholarships (six out of Sewanee’s last seven, in fact!) and countless other academic achievements and campus leadership positions. Academics, athletics, and residential life have all been positively affected by women’s arrival on the Mountain. (Dean of Women Mary Sue Cushman, above) 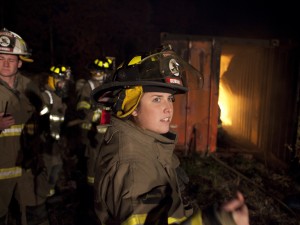 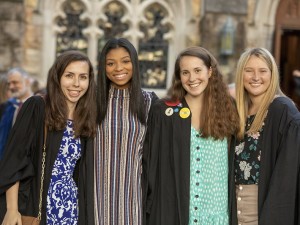 The School of Theology admitted its first woman into the M.Div. program in September 1971 and she graduated in May 1974. In 1973–74, two women were admitted and in 1974–75, five were admitted. This year the Episcopal Church celebrates 45 years of women being ordained.

The University is observing the anniversary all year with concerts, plays, and lectures. Already this semester, students from the Department of Theatre and Dance have given a staged reading of Gee's Bend, by Elyzabeth Wilder, and performances of Our Country’s Good, by Timberlake Wertenbaker. Emilie Townes presented the School of Theology’s DuBose Lectures.

The Department of Theatre and Dance will continue to spotlight the work of women artists and playwrights during the 2019-20 season, with DanceWise coming in November. In the spring, Theatre and Dance will present Stiff, a one-woman show by guest artist Sherry Jo Ward, and Ugly Lies the Bone by Lindsay Ferrentino.

November will bring the annual Anita Goodstein Lecture, this year by historian Margaret Marsh, as well as a solo organ recital by Shin-Young Lee as part of the Performing Arts Series. Additional lectures and performances featuring accomplished women will occur in the spring.

Homecoming 2019 (Oct. 31-Nov. 3) gives the University an opportunity to celebrate “50 Years of Women at Sewanee” with returning alumnae. Activities have been added to the weekend schedule to recognize the occasion. The community is welcome to attend the presentations, panel discussions, and other events. See the schedule here. A few highlights include: