50 years of women on the mountain

When the University of the South first admitted women as full-time first-year undergraduate students in 1969, Judith Ward Lineback was the first to matriculate. She was one of 103 women to enter Sewanee that fall, beginning sweeping changes in the College and the community. By 1971 women made up 16 percent of College students; 10 years later, they were 43 percent of the student body. Women made an immediate mark on the academic life of the University, with members of that first class being initiated into Phi Beta Kappa and other honors organizations. And although the road to athletic inclusion was somewhat bumpier (no locker rooms existed), before long women’s teams were competing and winning championships for Sewanee. 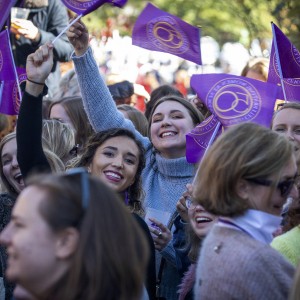 Close to 1,000 alumnae returned to Sewanee Oct. 31-Nov. 3 to celebrate the 50th anniversary of the arrival of women as students in the College. Their numbers and enthusiasm showed in a constant flow of hellos and hugs, in standing-room-only panel discussions and receptions, and in a sold-out (and then some) gala celebration. 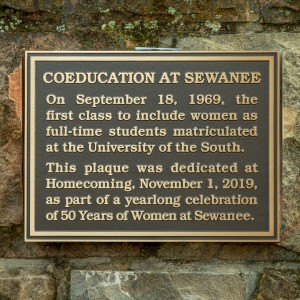 A plaque celebrating the milestone was unveiled during a brief ceremony in the Quad. Vice-Chancellor John McCardell noted that, “The entrance of women as students in the College marked a seismic shift in the course of the University’s history—though the importance of the change is maybe better recognized from a distance.” He noted the numerous ways in which alumnae have brought credit to their alma mater before the plaque was revealed by trustees Malicat Chouyouti, C’20, and Carol Shepherd Titus, C’81.

All Saints’ Chapel joined the celebration of Sewanee women on All Saints’ Day, Friday, with a service featuring Sewanee women. The Rev. Dr. Melissa Hartley, C’93, served as celebrant, and the Rt. Rev. Kathryn “Kai” Ryan, C’86, bishop suffragan of the Diocese of Texas, delivered the sermon. Serving as readers were Judy Ward Lineback, C’73, and current Order of the Gown President Nellie Fagan, C’20. 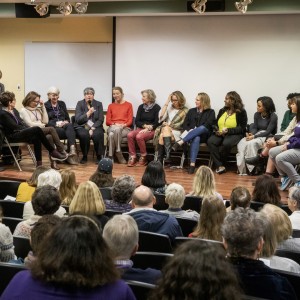 Countless conversations—both planned and informal—by and about Sewanee women took place during the weekend. An alumnae arts showcase displayed the impressive talents of Sewanee women via their books, paintings, quilts, photographs, and more. The planned events also included a Rhodes Scholarship discussion that featured four of Sewanee’s six female Rhodes Scholars, and a panel that included graduates and students from each of the five decades since Sewanee first admitted women as full-time students. Thanks to everyone who participated for addressing tough topics, telling your stories, and sharing so many laughs! See photos from the weekend here. 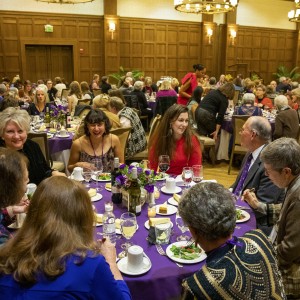 The 50 Years of Women celebration culminated with a gala at the Sewanee Inn. Klarke Stricklen, C'22, gave a tribute to Sewanee's African American alumnae. Theresa Weston Saunders, who came to Sewanee in 1971 as one of the first two African American women, sent greetings via video. Linda Mayes, C’73, and Meredith Walker, C’91, gave the weekend’s keynote addresses. Read Mayes’s remarks and Walker's remarks. (Scroll down for the link to video of the speakers.)

The video below was inspired by the ways Sewanee alumni connect across generations. We always find an experience in common, no matter how far apart are our class years. Allison Kendrick, C’10, brought together three pairs of alumnae, from classes years apart, and recorded their conversations. Here are excerpts.

Watch the video
Photos
It was a special weekend!

See photos from many of the weekend's events. Even if you were on the Mountain, you couldn't be everywhere at once!

In addition to the Homecoming events, dozens of special events celebrated the history and accomplishments of Sewanee's alumnae and current students.

To commemorate 50 years of coeducation at Sewanee, we have created a portal for you to share your Sewanee story. Open to alumni, faculty, staff, and other Sewanee community members, all of these stories will be preserved in the University Archives. We can't wait to hear about your experiences on the Mountain.

Please help us spread the word about the 50 Years of Women Celebration. Get in touch with your Sewanee friends and let them know about this website and our Facebook group. Make sure we have your latest contact information, too–especially email.