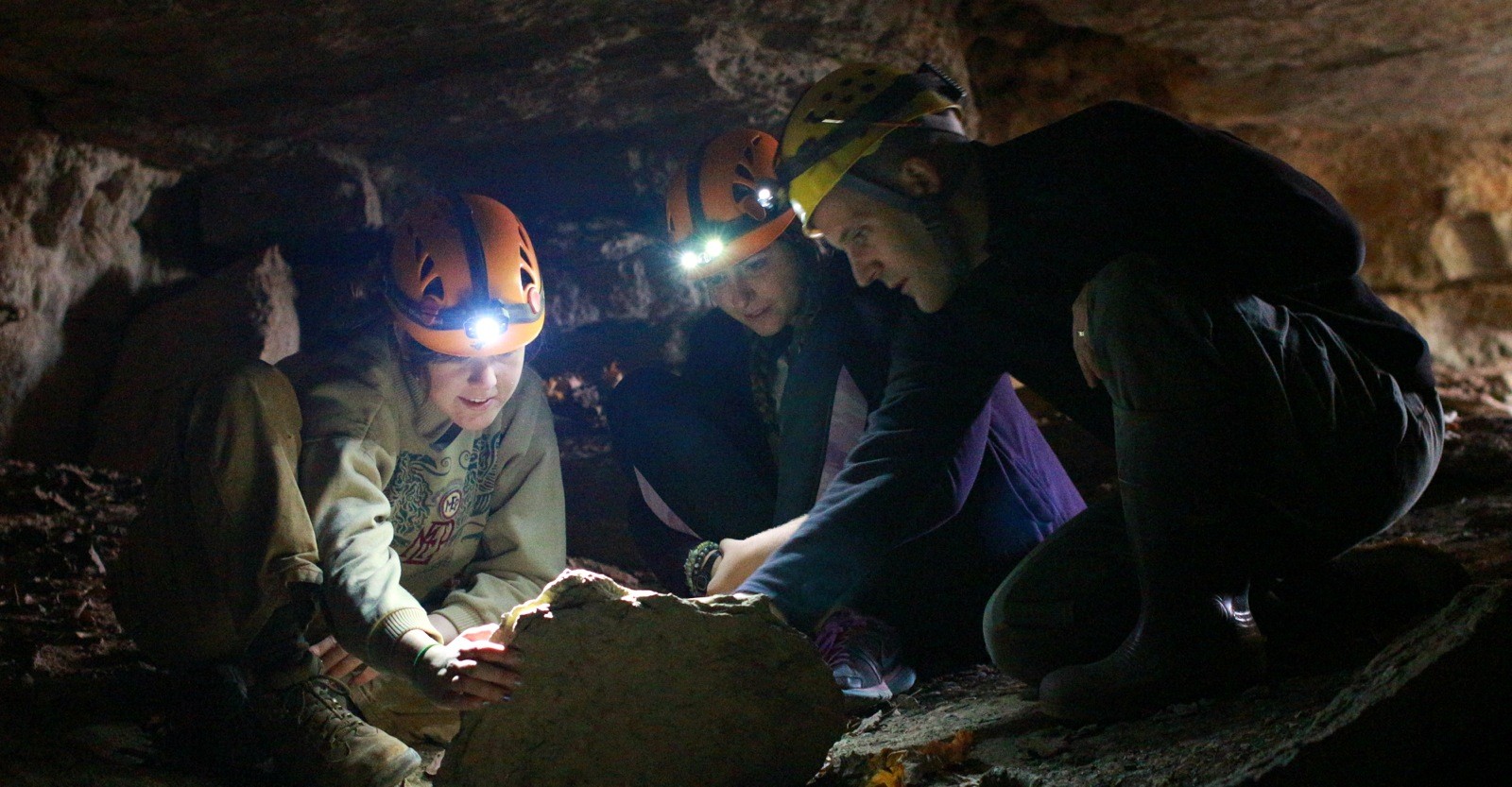 MaryBeth Yancey, C’17, (left) and Bre Ayala, C’17, (center) are two of more than a dozen students who have worked on biological surveys in area caves with Biology Professor Kirk Zigler. Photo by Stephen Priest, C’20

Biology Professor Kirk Zigler and his students make remarkable finds in the caves of Sewanee and beyond.

I t’s Aug. 10, 2015. Standing in a foot of water deep in a cave in North Georgia, Kirk Zigler, professor of biology, sees a fish swimming beside his boot, across a pool, and then under a ledge. He’s pretty sure it has no eyes, and that means he is also pretty sure he has spotted Typhlichthys subterraneus, the Southern cavefish. It is common around Sewanee and in the karst regions to the west of the Plateau. The interesting thing is not that the fish has no eyes but that this cave, Crane Cave, is more than an hour east of Sewanee and right in the middle of another physiographic province, the Appalachian Valley and Ridge, where no cavefish has ever been seen. In fact, for complex and not quite understood reasons having to do with the underlying geology, fewer than 10 percent of the species found in caves on the plateau and to the west are found in the Valley and Ridge province, though the two regions are adjacent to each other and both are significant karst regions where caves form.

A call to colleagues from other institutions yielded skepticism, but Zigler is an experienced field investigator, so he and his student assistant, Bre Ayala, C’17, arranged three return trips to the cave. They finally collected one of the fish, from which they clipped a tiny amount of tail tissue for DNA analysis, which confirmed his sighting. That gave Zigler and Ayala the opportunity to contribute to a paper in Subterranean Biology on the first definitive sighting of the Southern cavefish in the Valley and Ridge.

Zigler’s (and his students’) growing list of publications on cave creatures may seem strange for a scholar who came to Sewanee having worked as a marine biologist. Before Sewanee, Zigler could be found snorkeling in the Caribbean or dipping sea urchins out of the icy waters around Puget Sound’s San Juan Islands. Now he crawls through cool, damp caves wearing a helmet with an LED light.

“Well, caves develop in limestone, which formed on the bottom of the ocean,” Zigler says, joking about the connection between his areas of interest. Joking aside, Zigler embraced cave biology even as he was applying for the job at Sewanee. “I was doing my research on Sewanee to prepare for the interview and realized there are many caves and lots of cave biodiversity in the area. I thought that was pretty interesting and might shape a research program.”

It has. Over the past decade, he has been in more than 200 caves, doing biological surveys to see what is in them. He’s taken students like Ayala with him every step of the way. “The cave projects have involved more than a dozen students, led to six honors theses in biology and produced 10 papers with student coauthors, plus a couple of others currently in draft form,” he says.

When Zigler and Ayala discovered the cavefish, they were participating researchers on a large survey of the caves of the Valley and Ridge province and were assigned the caves of North Georgia. Over the past year, he has been doing biological surveys in Middle Tennessee with MaryBeth Yancey, C’17, and he has a new grant from the National Park Service to study the caves at Cumberland Gap National Park starting this winter.

The work has been remarkably productive. This summer, he and Yancey discovered what they believe is a new species of spider that has only four eyes. Yancey, a double major in ecology/biodiversity and art has a great eye for detail, according to Zigler. “We’ll be walking in a cave and everyone else will pass something by and MaryBeth will say, ‘Hey, look at this.’”

In 2013, Zigler and Will Coleman, C’14, rediscovered an isopod (a kind of crustacean) that hadn’t been seen in nearly 50 years. It was thought to be extinct after the only cave it was known to inhabit was flooded by the impoundment of Nickajack Lake.

Because caves are isolated habitats, populations of cave animals are isolated from one another, and species tend to have small ranges. It is perfectly possible that the spider discovered by Zigler and Yancey in the summer of 2016 may live in only one cave in the world. A paper Zigler co-authored with Groves Dixon, C’10, noted that the Sewanee Domain is marked by remarkable genetic diversity among its caves, even those that are very close to one another. If you’re a cave creature, your genes don’t get out much.

Understanding and characterizing previously unknown biodiversity is the payoff here. As extremophiles, living at the margins, cave creatures exhibit distinctive adaptations to unusual conditions. Isopods, cavefish, spiders, beetles, flatworms, and the animals like bats and wood rats that move in and out of caves are among the creatures Zigler and his students have documented as part of a collaboration with Matthew Niemiller of the Illinois Natural History Survey. The group has published a field guide to the cave life of Tennessee, Alabama, and Georgia through the National Speleological Society.

Caving has been a favorite activity of Sewanee students for decades, and Zigler relied on the Sewanee Outing Program to show him just what it was like to be in and move around in a cave without losing orientation. Before coming to Sewanee, he had been in only commercially operated caves.

Now the recreational activity of caving is turning into a rich source of academic work in addition to the biology research Zigler is doing. Just one example: A few years ago, Saunders Drukker, C’17, discovered a cave near Armfield Bluff. Nancy Lilly, C’15, later mapped the half-mile long cave in fine detail. Lilly was a mainstay in the Sewanee Outing Program while a student, so that academic opportunity was directly connected to the co-curricular recreational activity, yielding just another example of the educational potential available from the Sewanee Domain.

“You could call this article ‘What Lives Beneath,’” Zigler says. And that sums up the fascination for a biologist who has been looking at what lives beneath—from beneath the ocean surface to beneath the limestone and sandstone of the Appalachians—for his whole career.