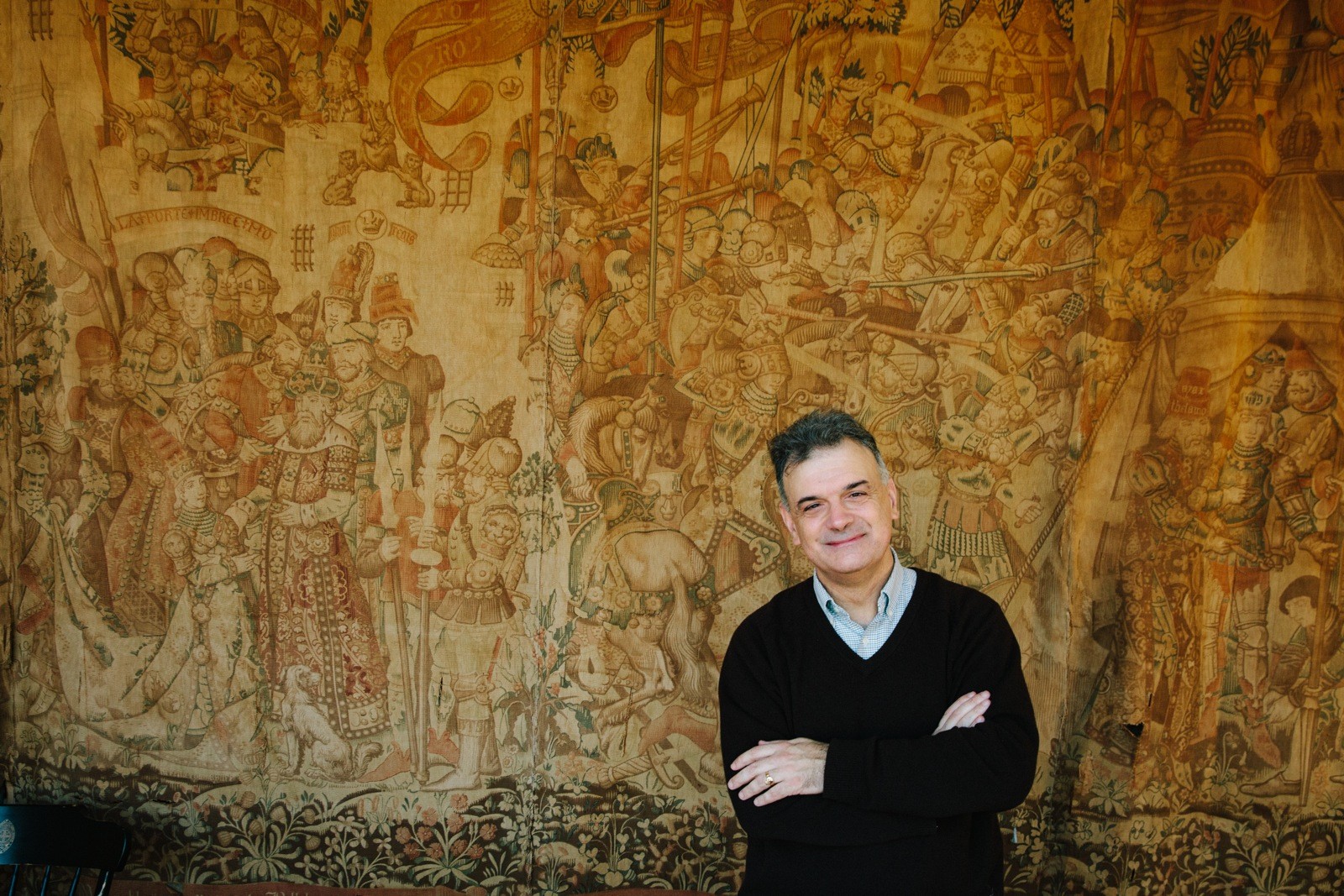 Classics Professor Chris McDonough surrounded by scenes from the Trojan War, depicted in what may be a 19th-century reproduction of a 15th-century Belgian tapestry that hangs in the McGriff Alumni House.

You can hardly swing a felis mortuus in Sewanee without hitting a classical allusion. Classics Professor Chris McDonough explicates a few of the more interesting examples—from the sacred to the profane—for your edification and entertainment.

S ewanee’s love affair with classical languages goes all the way back to its founding, when the University motto, “Ecce Quam Bonum” (the start of the Latin version of Psalm 133), was printed on the cover of the proceedings of the first trustees meeting in 1857. Since then, anyone who’s ventured onto or near Sewanee’s Quad (from the Latin quadrangulum) has been surrounded by ancient texts—from chapel plaques, cemetery headstones, and salutatory addresses to some, let’s just say “less obvious” examples.

A few months ago, Jerry Smith asked me about working with him to write a volume for the Sewanee History Project on the Greek and Latin found around Sewanee. In fact, I told him, one already exists—Greek and Latin As Used at Sewanee was a nice little pamphlet put together by an undergraduate named Forrest Dillon in 1972. Still, I thought it might be fun to update and expand what Dillon had done, if only to include the one classical text I get the most queries from alumni about—the diploma.

In the next year or so, a few undergraduates and I will be bringing out a new volume of Greek and Latin As Used at Sewanee, for which Forrest Dillon has agreed to write the introduction. What follows are some of the more intriguing examples we have found around campus, and they really do go from the sacred to the profane.

Some Inscriptions in a Sacred Space

It seems only right to start off with a few classically related items found in All Saints’ Chapel. Along both ambulatories are lancet windows depicting the University’s various academic departments. Most of these windows were produced in the 1950s by Arthur Erridge of J. Wippell & Co. in Exeter, England. Along the southern wall of the chapel is the window dedicated to Greek. In it, we see depicted one of the fathers of the Church, St. Clement of Alexandria, whose Christian interpretation of classical learning was a marvel of erudition. Probably no Church figure better bridges the gap between Greco-Roman and Judeo-Christian civilization. Above Clement’s head, in the diamond-shaped window at the very top, is a hard-to-see line from his great theological work, Stromata, which reads, πάντων μεν γαρ αἴτιος τῶν καλῶν ὁ θεός, “God is the cause of all worthy things.” To Clement, Greek philosophy was a positive good that could be attributed to God, though not as directly as could be the Scriptures.

A striking thing to my mind about this window, beyond Clement’s colorful robes, is the archaeological nature of its composition. A reconstruction of the Acropolis in all its architectural glory can be seen by his foot. What better way to symbolize the saint’s grounding in the classical past? Even more striking is the careful reproduction in the clear glass below the Acropolis of a tablet from Mycenaean times written in the archaic script called “Linear B.” What’s really remarkable is that scholars had only just deciphered Linear B a few years before this window was made. With the depiction of St. Clement, the Acropolis, and the tablet, the artist subtly portrays not just a continuous tradition of literacy in the classical world, but also one of scholarly engagement.

Below the window is the memorial plaque dedicated to one of Sewanee’s great classicists, Bayly Turlington, a beloved professor who died too young at the age of 58. At the bottom the inscription reads, οὐ τὸ ζῆν περὶ πλείστου ποιητέον ἀλλὰ τὸ εὖ ζῆν, “We ought not to consider living the most important thing, but rather living well.” It is one of Socrates’ most famous lines, delivered as he waited to be put to death, and one Turlington would have known well as the author of an excellent introduction to Socrates’ life and works.

Not far from the St. Clement window is another memorial plaque, this one dedicated to William Alexander Guerry, a significant figure in Sewanee’s history who would later be tragically shot at St. Philip’s Church in Charleston, S.C., in 1928. Remembered fondly as “Father Gerry” in Ely Green’s memoir, his son Alexander became the University’s ninth vice-chancellor. The original conception for All Saints’, as well as its principal fund-raising, was the work almost entirely of Guerry. As he wrote in a memoir, “It was at the close of my stay at Sewanee, about the year 1903, that I first conceived the idea of raising a fund with which to build the new All Saints’ Chapel. Reinforced by a resolution of the Board of Trustees, and sent out by the Vice-Chancellor, I traveled from North Carolina to Texas during most of my winter vacation for several winters. By addresses and appeals delivered in a number of Churches, and by personal canvass and solicitation, I succeeded in three years in raising over fifty thousand dollars for the new Chapel. Accordingly, in 1905, the Cornerstone was laid and the walls begun.” Fittingly, the inscription on his plaque reads, Si monumentum requiris, circumspice, “If you seek his monument, look around.” The same words make up the epitaph of Sir Christopher Wren in St. Paul’s Cathedral.

The Trojan War in Sewanee

Even on a Tuesday morning, the entryway to the ATO house smells like beer, but once you’re inside the main room, you see the truly striking wooden carving over the fireplace. Partially damaged, the words can be hard to make out, and the Gothic script has got some of the brothers convinced that the inscription is German. But in fact what graces the fraternity house’s mantel is a line taken from of Virgil’s Aeneid, Book Two: Haec olim meminisse iuvabit, “One day it will be pleasing to remember these things.” The passage this verse is taken from describes the fall of Troy and all its attendant atrocities—its application to fraternity life is good-humored. Beneath the carving is a bronze plaque that reads, “The original of this mantel woodcarving, a labor of love by Miss Dora Colmore, placed over the fireplace added to this room in 1905, was destroyed by fire in 1959. This faithful reproduction was placed here in 1960 by her boys in recognition of her lifetime devotion to this chapter.” Theodora “Dora” Colmore, born in 1880 in Sewanee, “represented one of the last links with the early days of the University of the South,” her obituary in the Nashville Banner read in 1963. Another example of her handiwork can be seen in the ornamentation of the Otey Memorial Church altar.

The Trojan War also makes up the subject matter of a large tapestry (17.5 x 9.5 feet) now hanging on the second floor of the McGriff Alumni House, formerly the Phi House. Given to the University by Commander Charles E. Thomas, C’27, of Greenville, S.C., the tapestry hung for some years in the ambulatory behind the high altar in All Saints’ and then later in the EQB building. Modeled after a Belgian original (possibly by the noted 15th-century French artist, Jean Fouquet), the tapestry appears to be a 19th-century reproduction. Although in bad shape, the lettering on some of the figures is still legible, as are the descriptions below each of the four panels. The first reads, Conveniunt Auspice Priamo/Danaaum Ductores Heroesque Troiani, “Under the auspices of Priam (King of Troy) the leaders of the Danaans and Trojan heroes assemble.” While versions of the other three panels of this tapestry can be found in London’s Victoria and Albert Museum, this first one appears to be unparalleled in other collections of Belgian tapestries.

At Last, the Profane Examples

One can find many instances of Latin and Greek in the University Cemetery, but the phrase that adorns the grave of Edmund and Maria Kirby-Smith may be the most unconventional. Non Carborundum Illigetimi, it reads, usually translated as “Don’t let the bastards get you down.” It’s not actual Latin but a sort of elaborate joke, the sort that gets less funny the more you explain it, but here we go: In Latin, necessity is explained by using the gerundive form, easily picked out by its unusual “—nd-” construction. Karthago delenda est, “Carthage must be destroyed,” is a famous example, and it can also be seen in a word like memorandum (“that which must be remembered”) or the name Amanda (“She who must be loved”). Although it sounds like one, “carborundum”is not a gerundive but the name of the extremely durable compound made up of silicon and carbide. This mock-Latin phrase was popularized among army staff in World War II, particularly by General Joseph “Vinegar Joe” Stilwell, and later adapted as an unofficial motto by Sen. Barry Goldwater during his unsuccessful campaign for president in 1964. It’s a most appropriate phrase for Colonel and Mrs. Kirby-Smith, both former Goldwater supporters.

In the foyer of the Fowler Center, one can see the bronze tiger made in memory of Col. Kirby-Smith by his daughter, Maria, the eminent sculptor well known for her sense of humor. On the statue of Strom Thurmond made for the town square in Edgefield, S.C., she had hidden a little cockroach on his rump as a sort of editorial comment—it was later sandblasted off. Here in Sewanee, she has inscribed onto the tiger’s testicles the phrase Non Carborundum Illigetimi. Next time you’re in Fowler, have a look (bring a flashlight, go to the tiger’s back end, peer under the tail)—if anybody looks at you funny, tell them of your interest in classical allusions.

I am hard at work with my students on this little book of Sewanee inscriptions, and we are still collecting instances of them all over the Domain. We hope to have the book out in a year or so—while I know it may not interest a great many people, I imagine it will fill a small, but passionate, niche. Feel free to add a comment or drop me a note at cmcdonou@sewanee.edu.