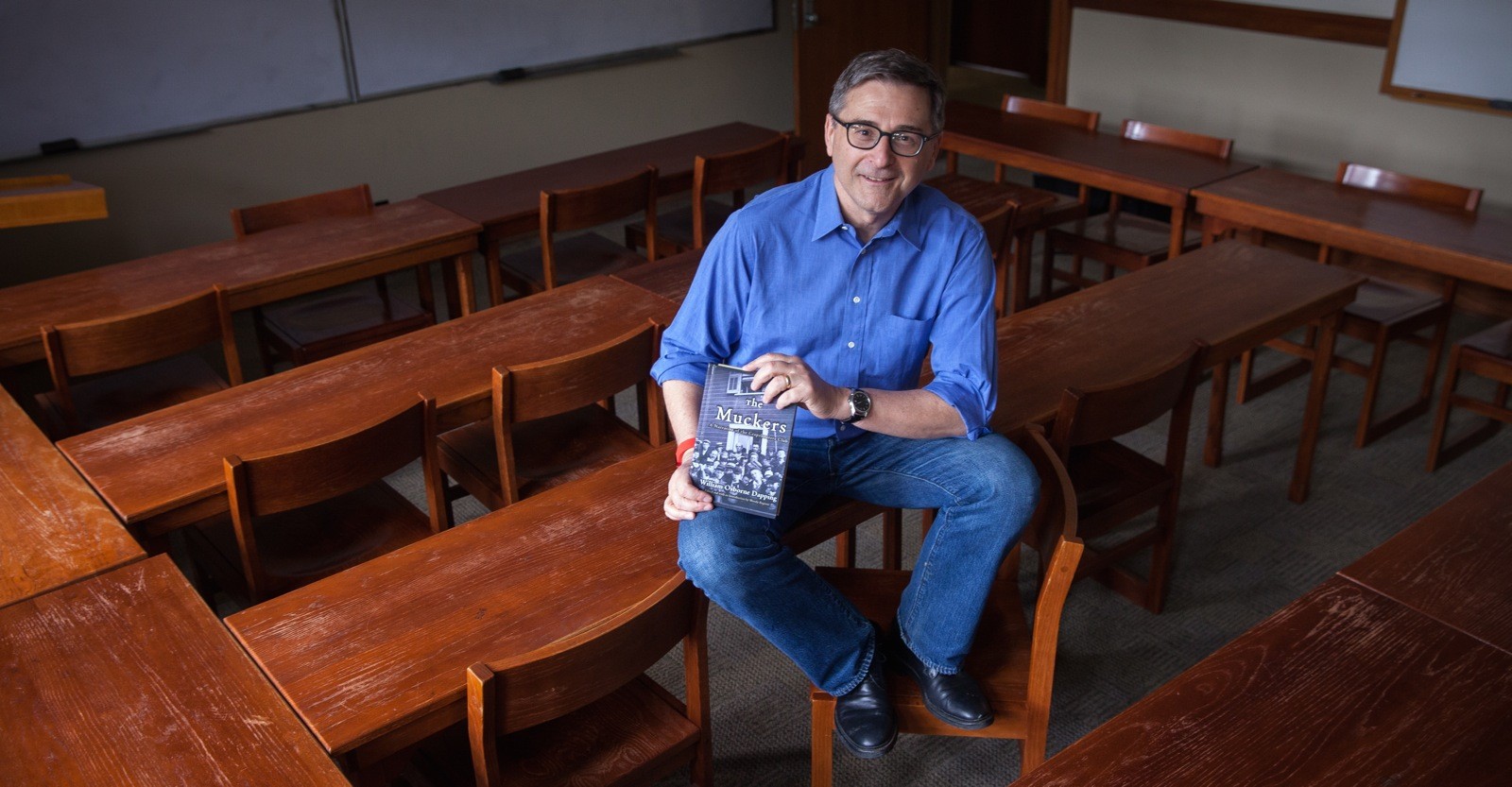 W hen Professor of History Woody Register, C’80, began investigating Progressive-era reformer Thomas Osborne about five years ago, he stumbled across another compelling character in a young friend of Osborne’s, William Dapping, whose first-person account of life on the New York City streets in the 1890s has now been published in The Muckers, a book edited by Register. The book offers readers, for perhaps the first time, the chance to hear directly and powerfully from a member of a fascinating group of overlooked children of the 19th century.

In the late 19th and early 20th centuries, Osborne was a noted, perhaps even famous, prison reformer and social progressive. He would often disguise himself, going undercover, to learn about something he was studying. For example, disguised as Tom Brown, he did research that led to the publication of Within Prison Walls in 1914 and was later named warden of Sing Sing Prison.

Register began plowing through the Osborne archive at Syracuse University, which Register knew contained voluminous correspondence between Osborne and men who had once been residents, or “citizens,” of a home for at-risk youth called the George Junior Republic. Osborne was deeply involved with the Republic as a philanthropist and board member, and befriended many of the boys. He wrote letters daily, keeping carbon copies, and the letters numbered in the hundreds every week. His letters, and the replies from the boys, comprised a record Register wanted to study. “The George Junior Republic was part of a progressive reform movement,” he says. “And I wanted to hear more about one of these reform institutions from the actual children, to let them have a say about how they were defined and maybe exploited.”

In the 1890s, William George, founder of the George Junior Republic, invited the “worst boys” in Manhattan to be “citizens” of the Republic, which operated under two guiding principles: 1) nothing without labor, and 2) self-governance by the citizens themselves. Upon arrival at the upstate New York facility, the boys had to work to receive even the most basic shelter, even if they came with money. “What’s interesting is that historians who have written about Thomas Osborne have missed the voices of these children—which is a shame,” says Register. “Hearing the voices of poor children is nearly impossible, but because of the way Osborne carried on letter writing with these children, we can hear them in a remarkably clear way.”

In the process of learning more about these children, Register took special interest in William Dapping. An alumnus of the Republic who went on to graduate from Harvard University, Dapping enjoyed a distinguished career as a journalist in Auburn, New York, winning a Pulitzer Prize for coverage of a prison riot in 1929. Ultimately, Dapping’s papers also came to the Syracuse archives, and in those papers, Register made a remarkable discovery that changed the direction of his work: a book-length, first-person account of life on the 19th-century New York streets. “When I saw this, I knew I had to spend time with it,” Register says. “I had been intending to work on a book that uncovered a variety of voices, but this manuscript was so remarkable that I took time out of the main project to make this available as a book.”

But he did not do that right away. With the help of research assistant Lacy Broemel, C’13, Register busied himself with the Osborne papers, while the Dapping papers were being fetched from a warehouse and delivered, uncataloged, in cardboard boxes. “I had an idea that the manuscript might be in there. I had read references to it in some of the correspondence with Osborne, so I knew about the work, but I put off looking because I didn’t want to be distracted, and, frankly, didn’t want to be disappointed.” Register looked sidelong at the Dapping boxes from July to October before opening them and discovering the extraordinary manuscript.

“This is such an interesting and rich narrative,” Register says. “It’s worth reading and understanding the reality of these children’s experiences.” The Muckers provides a vibrant first-person account of life in the Yorkville neighborhood of Manhattan in the 19th century. The Muckers of the title, also known as the Crap-Shooters Club, were children of the street who relied on their wits, pranks, and petty crime to get by, to help their families put bread on the table, and to have some control over their lives. If William George was looking for the worst boys, he found one in Dapping, who was the leader of a street gang that engaged in many kinds of mischief before joining the Republic.

Register’s introduction to the book teases out the story behind this lost work, how it fits into the literature of the day, and the relationship between Dapping, Osborne, and George. While The Muckers is a work of fiction, Dapping worked hard to keep the voice of the first-person narrator as authentic as possible. At the time he wrote it, The Muckers was transgressive in a number of ways: in its use of ethnic epithets, in its coarse language, in its lack of an intermediary polished narrator to give it respectability, and even in the very title, a reference to the manure of the pre-automobile city streets. Register’s study reveals that Osborne pressured Dapping to alter his text in various ways to make it more palatable to contemporary readers and publishers, but Dapping refused and when publishers refused to consider the anonymous work, Dapping hid it away.

In its profanity and blasphemy, The Muckers profoundly challenged the sensibility of the day. The book is not written from the point of view of reformers but from the point of view of the poor, and is singular in that perspective. His aim is truth-telling, but it was his own truth, one that remained uncompromised and thus unpublishable at the time.

For Register, because Dapping defended the integrity of the narrative instead of allowing himself to be exploited by it, the manuscript survives in a way that allows 21st-century readers to gain insight into the lives of New Yorkers in ways other accounts cannot. Register writes: “We can hear Dapping and the lost voices of the Crapshooters of Yorkville now only because he—not Thomas Osborne or any outsider or child-saver—decided to preserve this insiders’ version of the truth about the so-called slums.”

Through publication of the book, Dapping has now won the long game, writing his own history just as surely as his coverage of a prison riot earned him a special Pulitzer Prize.

The 2016 publication of The Muckers by Syracuse University Press is the first phase of a remarkable exploration of the George Junior Republic and the children who lived there. The next phase is a book that follows the lives of four of the boys through their correspondence with Osborne. Focusing on the lives of the children fits with Register’s professional work as a historian following a lesson he learned as a senior at Sewanee in a class taught by Visiting Professor William Leach. “He helped me come to understand that the past is more than abstractions. It was lived by human beings.”

After graduating from Sewanee, Register worked in newspapers for a few years and also learned important lessons from his mentor, John Seigenthaler, at the Tennessean. “‘Be the first to tell the story and tell it well,’ was a lesson he imparted,” says Register, “And as a historian, that is still what drives me. My allegiance is to the story. As a historian, I am trying to understand the lives of real human beings who were living during a time that interests me. I like revisiting questions that maybe we thought were long settled and not being satisfied with the old answers. I like to see what else we can learn from those areas of inquiry.”

While the next chapter in the George Junior Republic saga is yet to be written, Register is already starting on his next project, the Sewanee Slavery Project, which seeks to revisit persistent questions at Sewanee to see what else we can learn. While the subject is different, the methodology is the same: Move past abstractions into the lives of real people. Discover the voices of the past that may not have been heard. Let those voices speak, and listen to what they say.