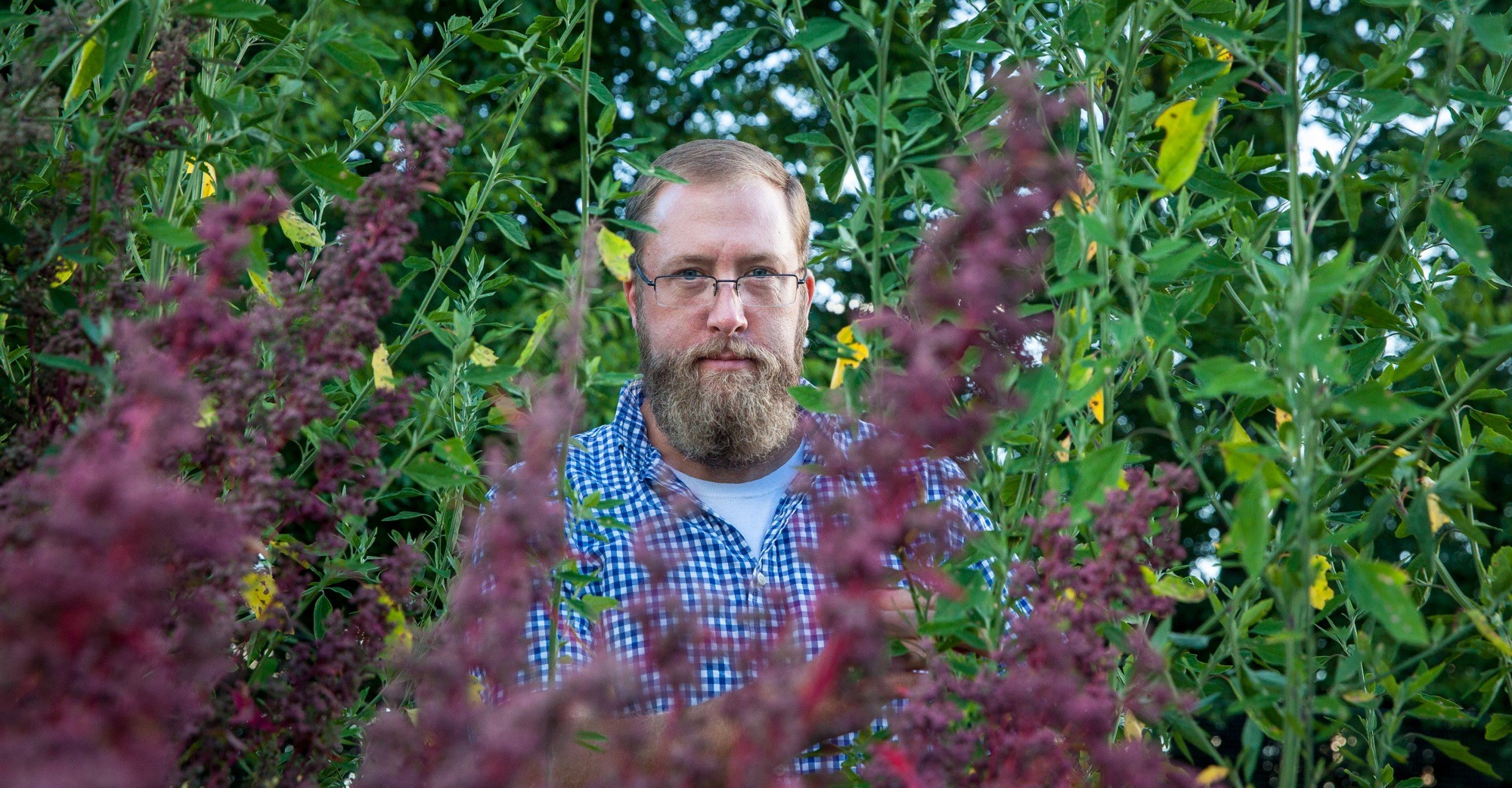 Stephen Carmody among the lamb’s-quarter at the University Farm.

S tephen Carmody, a visiting assistant professor of archaeology at Sewanee, has an idea: Maybe we should all be eating weeds.

If all goes according to plan, diners at Sewanee’s McClurg Dining Hall will put his idea to the taste test sometime next spring, when two new options go on the menu: pigweed and lamb’s-quarter.

These days, gardeners and farmers spend plenty of time and money trying to kill these plants—they call them weeds—but the prehistoric residents of the South Cumberland Plateau apparently relied on them as a food source, valued for highly nutritious greens and protein-rich seeds.

If you think spinach is healthy, try lamb’s-quarter. In addition to the nutritious leaves, the seeds are a close relative of ultrafashionable quinoa. Or what about a cup of pigweed, more politely known as amaranth? You could pick up more than half your daily requirement of protein and fiber, not to mention plenty of iron, calcium, and potassium.

Carmody is a paleoethnobotanist, which means that he digs up prehistoric sites looking for evidence of what plants prehistoric people ate.

In 2010, while he was still completing his studies at the University of Tennessee, Carmody signed on with a research team put together by University Archeologist Sarah Sherwood to continue excavation of two prehistoric rock shelters at Sewanee, one near the golf course and another not far from the University Farm and equestrian center.

Sewanee and the Cumberland Plateau are part of one of only eight regions in the entire world where humans took the huge step from relying on hunting and gathering to purposefully growing their food, the “Eastern Woodlands.”

The Sewanee researchers found seeds at the site near the farm, indicating that local Native Americans were eating lamb’s-quarter 8,000 years ago and had domesticated the plant by around 1,000 B.C. By the time Europeans came to the region, lamb’s-quarter and many other early crops had been displaced by corn. For modern North American agriculture, pigweed is something to eradicate, not cultivate.

For a paleoethnobotanist, finding evidence of domestication taking place somewhere like Sewanee is important professionally because it enriches the understanding of the creation and evolution of Native American agriculture. The Sewanee excavations support evidence found in other upland shelters that shows that plant domestication developed not only on fertile floodplains, as traditionally believed, but also in more marginal areas.

The evidence that Native Americans successfully cultivated plants like pigweed and lamb’s-quarter (often dismissed as last-resort “starvation foods”) as a regular part of their diet raises a much bigger question: Could our prehistoric forebears teach us something profound about recreating a form of agriculture that doesn’t require fertilizer, irrigation, or pesticides in order to be successful?

As Carmody points out in his academic writing, the people who domesticated plants and created agriculture did not set out to become farmers: They were trying to figure out how to ensure they had enough food to survive and prosper. Creation of food plots and plant domestication “were part of optimal behavior practices” to obtain the most food for the smallest expenditure of human time and energy.

Growing pigweed and lamb’s-quarter on the upper slope of the South Cumberland Plateau was, thus, “very deliberate and intentional,” an intelligent local solution to a local problem using little more than human ingenuity.

What if, by looking to the prehistoric past, we could find more examples of this sort of local problem­-solving, returning to cultivation the plants that our long­-ago ancestors relied on for sustenance—­­even if we’ve been conditioned to think of them as weeds?

“We’re at ground zero,” says Carmody. “I think there’s a lot of potential.” If his hunch turns out to be correct, a paleoethnobotanist could be the new Indiana Jones and the Holy Grail could be a bag of sustainable seeds.

Carmody may be the only current member of the University faculty to hold a captain’s license for commercial ocean vessels, and he can also put the ability to catch and release sea turtles on his résumé—he did that for a year during a pre-Sewanee career that embodies Yogi Berra’s suggestion, “When you come to a fork in the road, take it.”

He started his studies at Louisiana State University, but after five years and a transfer to the College of Charleston, he dropped out, took a job offer from a friend, moved to the Bahamas for four years, banded turtles, and made his way to Alaska, where he eventually rose to captain an ecotourism boat. And then he decided to go back to college.

The College of Charleston allowed him to re-enroll, but part of the deal was that he would take a series of assigned courses. One of them was anthropology, a discipline about which he knew nothing. Anthropology led him to archaeology, and by 2007 he was admitted to a master’s program in archaeology at the University of Tennessee. He completed the master’s degree in 2009 and went on to finish a Ph.D. in 2014.

I first met Carmody at the site of Rebel’s Rest, where he had been a member of the team that documented the remains of the venerable University guesthouse that burned in July 2014. He’s a big man, well over six feet tall, with the build of someone used to manual labor and a beard that would not be out of place on a Victorian ship captain. It was a sweltering July afternoon, and we agreed to continue our conversation later in the week at his office in Snowden Hall. I wanted to ask him about his new research effort, the Native Cultigen Project, an effort to find out if pigweed, lamb’s-quarter, and other local “weeds” can pass muster as modern-day food.

It’s probably worth noting that Carmody is far from alone among academic researchers looking at all sorts of alternative food sources: The stark fact is that modern agriculture faces its own Malthusian future, brought on by reliance on increasingly scarce inputs like water, petrochemical fertilizers, and expensive machinery. Climate change threatens, and the world’s population is still growing.

Since its informal inception with a few seeds in the ground and a few plants in the University Farm greenhouse, Carmody has relied on the farm staff for some of the practical aspects of testing his hypothesis. The current farm manager, Carolyn Hoagland, and her staff planted plots of pigweed beside the greenhouse this spring.

“We’ve eaten the greens,” he says. “But the seed harvest this fall will be the tell-tale.”

The focus of this research project is to find out if places like the top of the Cumberland Plateau, with its marginal soil and uncertain moisture, can sustain these indigenous plants in sufficient quantities to make them economically viable alternative food sources.

This would be a major reversal of fortune for some unloved local flora. Pigweed, for instance, is native to Southeast North America, but it is mainly seen as a noxious weed rather than a cash crop. Its hardiness, drought resistance, and ability to defeat pesticides mean it is loathed by cotton and soybean farmers.

Carmody says what’s driving his research is not proving a point about the development of agriculture 8,000 years ago, but contemporary realities. “The idea is that maybe this is a way to produce food for people that’s more sustainable.”

Because they fell out of favor as North American food crops millennia ago, plants like lamb’s-quarter have not been cultivated or improved by agricultural breeding techniques. If they could be returned to the human diet, it would be a classic case of reputational rehabilitation.

“Do I think this is going to rescue humanity?” he asks, smiling. He says he doubts it, pauses a beat, then adds, “but these plants have worked in the past.”