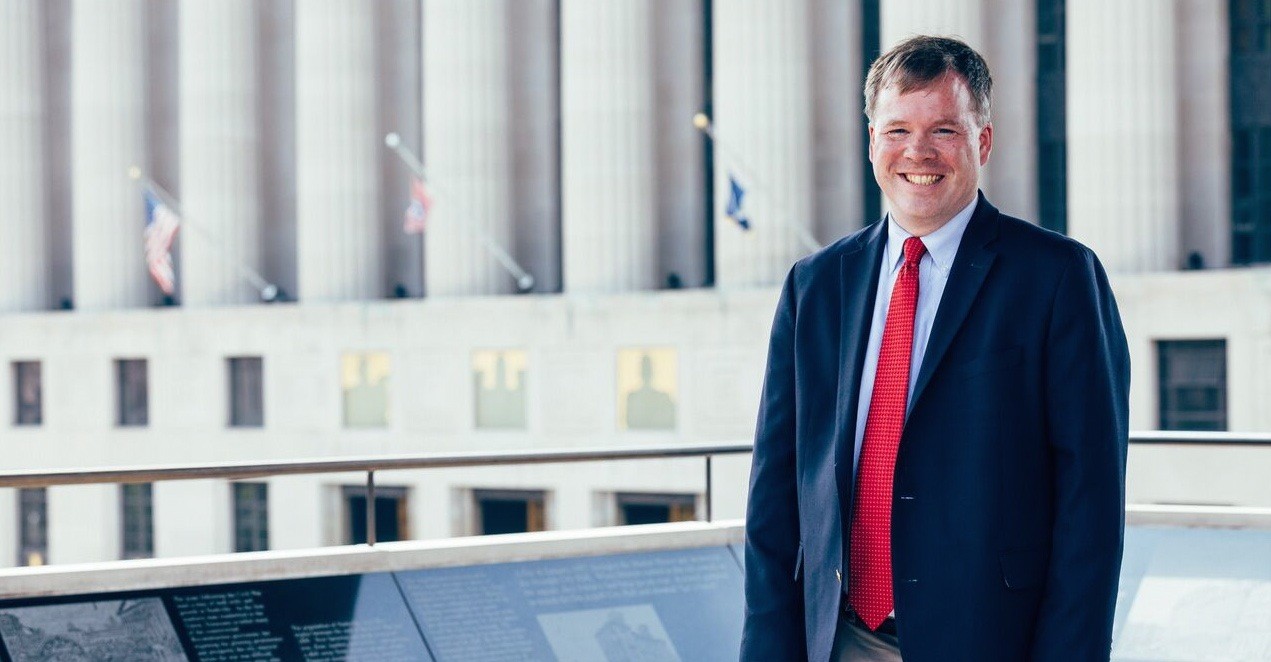 The Voice of New Nashville

As speechwriter and communications adviser to two mayors and co-author of a new book, Michael Cass, C’93, tells the story of the country’s hottest city.

E very media outlet from the Washington Post to Vogue seems to have included it on a must-see or best-of list. An Emmy-nominated major network television drama was inspired by it. Reports that as many as 100 people per day move to this city float through local conversation with equal parts horror and glee depending on who’s doing the talking.

When journalist Kim Severson crowned Nashville the next “it” city and then-mayor Karl Dean its “head cheerleader” in a 2013 New York Times article, the reactions were mixed. For many locals, the response was: “Thanks, but it’s always been ‘it’ to us.” But Severson was right. The city was changing, attracting new and different people and businesses. So what had accounted for Nashville’s seemingly overnight transformation? How had the city that once hung its (cowboy) hat on country music become an international destination for music, sports, art, and food?

Michael Cass, C’93, has an idea. In his first book, Nashville: the South’s New Metropolis, out this month and co-written with former Nashville Mayor Karl Dean, Cass explores the city’s 25-year history of electing progressive, visionary mayors and how that has led to its meteoric rise to media darling.

Like each of Nashville’s last four mayors, Cass is no stranger to taking risks. A longtime journalist turned political speechwriter, he need look no further than his own life for evidence of how important risk is for sparking change. Although politics had always been something Cass felt drawn to, becoming a speechwriter was never a career path he’d considered. After graduating from Sewanee, Cass headed back to his home state of Georgia, where he earned a master’s degree in mass communication from the University of Georgia. After cutting his teeth as a reporter at the Augusta Chronicle and the Macon Telegraph in his hometown of Macon, Cass moved to Nashville in September 1999, just weeks before Mayor Phil Bredesen completed his second and final term.

Covering Metro Nashville government and higher education for the Tennessean, Cass quickly became intimately aware of the inner workings of local government, following closely the efforts of Bredesen’s successor, Mayor Bill Purcell. After serving two terms, Purcell was succeeded by Mayor Karl Dean, the former thrice-elected Davidson County public defender. It was Dean who would offer Cass the chance to make a major life change, to take a risk that would set him on a new path.

“I was not expecting it,” says Cass about the day he received a call from Dean’s deputy mayor asking him to join their team as speechwriter and communications adviser. It was 2014, and Dean had only one year left in his term. There was no guarantee the next mayor would retain Cass’s services following Dean’s exit from office, and no one knew yet who that next mayor would be.

For Dean, Cass was the obvious choice to be his speechwriter. “Over the years, working with Michael the reporter ... I developed a great respect for his writing ability, ethics, and insights,” Dean wrote in an email interview. “For good or ill he has heard me speak many times and certainly knows how I express myself.” So after 15 years of political reporting for the Tennessean, Cass decided it was time for a change. He accepted the position and got to work writing for the mayor of a city whose name was capturing headline after headline.

When Mayor Phil Bredesen took office in 1991, Nashville was a city in trouble. Its downtown was home to adult businesses and plagued with crime. The last mayor had famously aired his dirty laundry to the national media. The only forward thinking the local government could seem to muster was into the next year. Bredesen, not a Tennessean, not even from the South, had his work cut out for him.

During his eight years in office, however, he was able to change the face of Nashville, both literally and figuratively. In 1996, with no tenant secured, Bredesen built an arena in that same tired, prostitution-riddled downtown where no locals wanted to be seen. Two years later, in 1998, Bredesen would find his tenant in the Nashville Predators, the city’s NHL team. Following construction of the arena, Bredesen got to work building a $292-million stadium that became the home of the state’s NFL team, the Tennessee Titans. Before leaving office in 1999, Bredesen also set in motion plans for a new downtown library and art museum. “When people say Nashville is on fire,” writes current mayor Megan Barry in the introduction to Nashville, “they should know that the investments Mayor Bredesen made and the opportunities he seized were the sparks that ignited the blaze.”

With Bredesen’s blueprints to work from, the city’s next mayor, Bill Purcell, set out to make Nashville a city where people would want to live. He built sidewalks, greenways, and public spaces. He renovated government buildings and increased the salaries of police officers and librarians. In 2001, the city brought three new cultural attractions downtown: the main library, the Frist Center for Visual Arts, and the Country Music Hall of Fame. Five years later, in 2006, just around the corner from Bredesen’s arena, the Schermerhorn Symphony Center opened. Nashville was on a roll and Dean was about to pick up the pace.

When Dean, Nashville’s sixth mayor, took office in 2007, he could never have anticipated the challenges the city would soon face. As the Great Recession of 2008 paralyzed much of the nation, Dean saw it as an opportunity for the city to push itself to the next level—to become not just a place that people would want to live but also a place that people would come from all over the world to visit. “Mayor Dean always says, ‘a city has to be willing to invest in itself, to bet on its own success,’” Cass says.

And invest he did. Like Bredesen and Purcell before him, Dean looked far into Nashville’s future and started building toward it. “Mayor Dean and the Metro Council decided to invest in the Music City Center in the depths of the recession,” says Cass. “That put a lot of people to work and it showed [Nashville was] confident.” Today, the Music City Center, a premier convention center in the heart of downtown, generates more than $840,000 a day in economic impact.

Just months after the Metro Council voted to approve the Music City Center in 2010, a devastating flood—following more than 13.5 inches of rain in 36 hours—submerged much of downtown Nashville and affected almost every area of the city. With damages estimated at over $2 billion, Dean was responsible for leading the city as homes, businesses, and lives were rebuilt.

Following a fiercely competitive mayoral race in 2015, Nashville elected its first female mayor, and the risk Cass took in 2014 by joining Dean’s team continued to pay off. Today, Cass remains the speechwriter and communications adviser for Mayor Megan Barry, a mayor now tasked with overcoming the challenges that befall a thriving city. Transit, affordable housing, and improving education remain at the top of her list.

Cass, who says being a political speechwriter is a lot like being a reporter—gathering information, talking to experts, distilling ideas into a larger takeaway—found the transition from Dean to Barry an easy one. As with Dean, Cass knew Barry before he worked for her, meeting her during her tenure as a Metro councilmember. Now as Barry’s speechwriter, Cass works to capture her tone and conversational nuances. “It takes a lot of listening, trying to absorb the way someone talks and thinks,” says Cass. “It’s a lot of osmosis and trying to study someone.” With as many as three or four events a day, Cass stays busy drafting speeches for most of Barry’s various commitments, working closely with the mayor’s press secretary and social media manager.

While Cass counts Mayor Dean’s final State of Metro as the most challenging speech he’s written to date, it is their new book together that has proven to be his toughest writing assignment yet. What started as a look back at the last 25 years of Nashville’s history through the lens of its mayors’ contributions quickly grew into a story that needed space for many more of the city’s most interesting characters. “We wanted to cover the people, institutions, and bedrock beliefs that make the city hum,” says Cass.

Filled with in-depth historical research, interviews with current and former politicos, and features on other prominent Nashville risk-takers like author-turned-bookstore owner Ann Patchett and rock superstar Jack White, Cass says he and Dean worked together to capture “the story of the city we love, the city he’s done so much to lead and shape.” Dean, now a distinguished visiting professor of history and politics at Belmont University, had no doubts about Cass when bringing him on as his speechwriter and had no doubts about making him his co-writer for the book. Dean writes, “It is no exaggeration to say no Michael, no book.”

In the New York Times article that seemed to launch a thousand lists, now-deceased Nashville writer John Egerton said, “I think Nashville is a big unfinished song.” If the city’s last 25 years are any evidence, Egerton might be right. Now just a little over one year into her term as mayor, Barry’s impact on Nashville is only beginning to unfold. With Cass now firmly planted as one of the keepers of the city’s history—chapter and verse—it’s clear the story is still being written.

Nashville: the South’s New Metropolis is available at Parnassus Books and Barnes & Noble in Nashville, and online here.