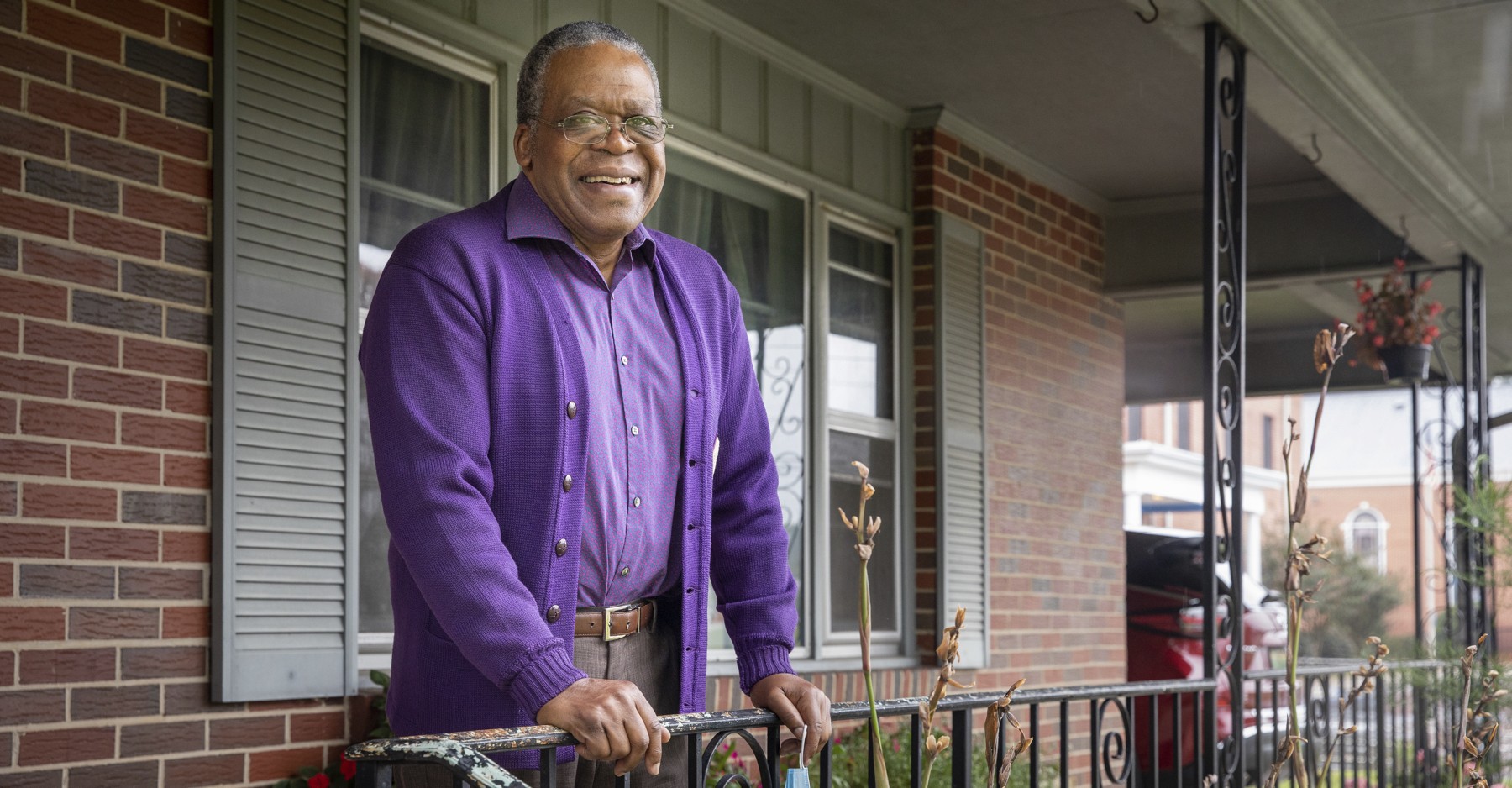 Fifty years after he became the first Black graduate of the College of Arts & Sciences, Judge Nathaniel “Bubba” Owens, C’70, reflects on a lifetime of firsts.

When Judge Nathaniel “Bubba” Owens, C’70, arrived at Sewanee in the fall of 1966, he didn’t see any other students who looked like him. Recruited to play football, not only was Owens the only Black student on the team, he was the only Black student on campus. While there had been a small number of Black students before him—John M. Moncrief in 1953, Merrick Collier in 1954, Joseph Green and William O’Neal in 1959—each was connected to the School of Theology, entering after a contentious and fractious period of desegregation. In 1963, three years before Owens arrived in Sewanee, Calvin Kendall Williams became the first Black student to enter the College. He transferred after one year. Rickey Rowe, from nearby Cowan, enrolled in the College in 1964, and like Williams, also eventually transferred. So it was Owens, a driven and faithful young man from the small town of Hartsville, Tennessee, who became the first Black student to graduate. Now 50 years after his historic milestone, Owens doesn’t view himself as an activist, pioneer, or leader. Instead, he believes now what he believed five decades ago: God’s got a plan. Trust in it, and anything is possible.

Born in 1948, Owens grew up in a two-bedroom house on farmland owned by his aunt and uncle. His father, a teacher, football coach, and engineer, put him to work at eight years old. The project was to convert their two-bedroom house into a five-bedroom house (Owens has three siblings) and create a hair salon for his mother, a hairstylist. Owens’ father wanted her to have her own space so she could work when and how she wanted. Over the next several years, nights and weekends were devoted to helping his father remodel their home. That meant digging out a basement by hand and hauling rocks to build supporting walls.

“It was the greatest physical training I could ever go through in my life. It was not a bad thing. I enjoyed it. I didn’t know any better,” says Owens. “It was fascinating to just think of what we accomplished, just the two of us.”

Owens lived on the “Black side” of Hartsville. The town was segregated, a fact he was mostly unaware of until his teenage years.

“I was able to get stronger than I realized because I wasn’t aware of what it meant to be segregated.”

It was an innocence that allowed for an unshakeable self-assurance to take root. Settling for less wasn’t an option, and quitting was off the table. It was an attitude that continued to place Owens in the right place at the right time, able to confidently advocate for himself even when the odds were against him.

In high school, Owens started working in the meat department at Reece’s, the local grocery store. The job set him in the epicenter of small-town life, where he would come to know the who’s who of Hartsville—something that would come in handy sooner rather than later.

When Owens’ older sister unexpectedly failed freshman chemistry at Tennessee State University after graduating as valedictorian of their local all-Black high school, he knew he needed to do something. He didn’t want the same thing to happen to him.

Growing up, Owens wanted to be a neurosurgeon. And he knew every neurosurgeon needed chemistry. When he learned that part of why his sister failed her chemistry course was because she’d never had the opportunity to see a test tube before college, it concerned and upset him.

“That got my attention. It got to me down deep inside,” says Owens.

The next time the superintendent of education came into Reece’s, Owens jumped at the chance to speak up.

“‘Is there any way we could have chemistry at Ward High School next year?’ Those words came out of my mouth,” recalls Owens. “And [the superintendent] said, ‘We just don’t have enough money. We can’t do that.’ That started a movement in me. But God was already ahead of me.”

Not too long after his dead-end conversation with the local superintendent, Jim Satterfield, the football coach at the all-white high school, pitched an idea to Owens. Hartsville was full of tobacco fields, and Satterfield needed another person to help him survey land. Would he be interested in the gig? Not even a junior in high school yet, Owens became the first Black Hartsville resident to perform tobacco surveys. But that wasn’t all. Though Owens didn’t know it then, his relationship with Coach Satterfield was going to provide what the superintendent couldn’t. He was going to get chemistry, and an opportunity no Black student before him had ever been given.

After Owens played football for his father at Ward, Satterfield recruited him to his team. By transferring schools, Owens would finally get access to chemistry class. He would also become the first Black student to play football at the school. Only things didn’t quite go according to plan.

On the first day of 11th grade, Owens was called to the principal’s office. Because he had transferred schools but hadn’t moved addresses, he would be ineligible to play for an entire season. It also meant he couldn’t practice with the team. Despite his shock and panic, Owens, just as he’d done with the superintendent in the grocery store earlier, found himself asking a question he didn’t know he had inside him.

“I heard a voice say, ‘Is there a class I can take sixth period?’” recalls Owens.

And so for his first year at a new high school where he wasn’t allowed to play football, Owens enrolled in a French class instead. He was able to play his senior year, but it was the French class that made him eligible for a scholarship to Sewanee.

The summer before fall classes started in 1966, Owens visited Sewanee and met with Football Coach Shirley Majors. He was offered a spot on the team and started practice the next day.

“I knew in my spirit that there was going to be a way for [attending Sewanee] to happen,” says Owens. “I can’t explain it. I just knew it was on.”

Owens’ arrival at Sewanee came on the heels of a pivotal year in American history. The year before, in 1965, Malcolm X had been assassinated, Bloody Sunday transpired in Selma, Alabama, the Voting Rights Act of 1965 was passed outlawing discriminatory voting practices like literacy tests, and U.S. troops landed in Vietnam. The country was divided. But for Owens, the only Black student on campus, life had to go on.

“I wasn’t dumb to it. I knew what was going on. But it’s much like the pandemic of today. I was in a pandemic then,” he says. “I had to keep going. I had to do what I could do. I couldn’t stop breathing. As I got older, I started to understand more things, but it didn’t change the whole picture.”

He credits athletic trainer John Kennerly for taking him under his wing. Other than Kennerly, the only Black employees Owens recalls seeing on campus worked in food services.

“Every meal I ate was cooked and served by African Americans,” he says. “They weren’t appreciated in the way they should have been.”

Owens worked hard to build his own community on campus. Popular and well-liked, he dove into football, his studies, and fraternity life.

And football was also a protective identity. “Bubba,” the nickname given to Owens as a child, was a personality independent of Nathaniel. It was an energy he could take to the field as a fullback to plow through anyone in his way.

“I was more of an animal than I was a guy. I don’t say that as a negative. But God had chosen that as the way to get me past things that I didn’t have time to get answers to,” he adds.

One of those things was an away game at Millsaps College in Jackson, Mississippi, where the crowd chanted a racial epithet at him while he played.

“I knew I was the only Black player on the field so I kind of got the idea they were talking about me,” he says. “And,” he adds, “it was one of my better days scoring touchdowns.”

For Owens, there was no experience at Sewanee, or elsewhere, that he would allow to drive him off course.

“I never had any things that got to me so bad that I couldn’t get over it, but I had some experiences. I had to go on. Every day was a new day,” he says. “I was not going to lay down and have them come get me out of the hole. I was going to go forward.”

During his time at Sewanee, Owens left behind the pursuit of neurosurgery when he realized he could graduate with honors if he stuck with English. He was inducted into the Order of the Gownsmen (now the Order of the Gown) and graduated with a degree in English in 1970. But he wasn’t done trailblazing yet.

In the summer of 1970, Emory University’s School of Law offered a summer program to 12 Black students. If they could complete the rigorous coursework, they would receive their first year of law school free. Only Owens and one other student finished.

As Owens worked his way through law school, he learned that no Black student had ever passed the Georgia Bar. As the chair of a law school committee representing minorities, Owens led the effort to file a suit against the Georgia Bar.

“We didn’t win. In fact, they told me I would never practice law in Georgia,” he says. “[God] managed for me to be the horn blower, to have a position where I could get the horn to sound, and then arranged for me to get the heck out of there.”

In Owens’ final year of law school, he was drafted to serve in Vietnam. He was able to defer one year in order to finish his degree before being sent to Fort McClellan in Anniston, Alabama. There he served as a second lieutenant in the U.S. Army.

Owens didn’t leave Anniston after his Army service, though. With no Black lawyers in the area, it was time to put his law degree to work. After meeting then-District Attorney Bob Fields, he was offered a position as assistant district attorney, the first Black ADA to serve in Calhoun County. Just a few years later, in 1979, after Gov. George Wallace refused to appoint Owens to the District Court, incoming Gov. Fob James appointed him. Owens was the first Black District Court judge to serve in the area.

Looking back on his 38-year career as a District Court judge, Owens sees himself as “tough but fair.”

“I wasn’t trying to impose something on you that you didn’t get on yourself, but I also gave you an opportunity to get yourself up,” says Owens. “The hardest challenge was dealing with the mamas, and that I was not going to release their sons just because they wanted them out of jail.”

Not only has Anniston been the place where Owens built a long and fulfilling career, but it’s also where he built a family. He and his wife, Lynetta, have been married for 28 years and have five children and five grandchildren. He’s right where he wants to be, surrounded by family and full of gratitude.

All the firsts Owens has achieved—from teenage land surveyor to District Court judge—have two things in common for him. They weren’t by his design and they’ve all served to make room for the next person on the path—to give someone else an easier way forward. It’s a mindset that’s served him well his entire life and he’s got no plans to change it now.