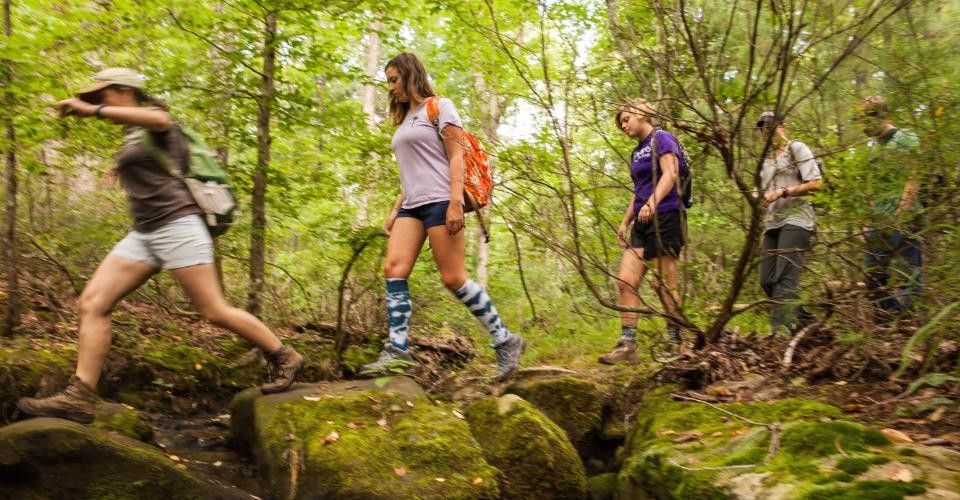 The Perimeter Trail at 25

How our favorite long hike went from century-old pipe dream to top-line item on every Sewanee bucket list.

T he Perimeter Trail— an approximately 20-mile hike that encompasses most of the western bluff line of the Domain and throws in a bit of the former railbed of the Mountain Goat line for good measure—turns 25 years old this year.

And June in particular is a special month for the trail. In June 1979, two students headed into the woods at Shakerag Hollow, equipped with loppers and rakes, to start clearing a path from the gates of the Domain to the Shakerag Trail, thus commencing the final 13-year push that makes it possible to walk all day and end up where you started.

Today, if there’s such a thing as a Sewanee “bucket list,” walking the Perimeter Trail is a strong candidate for a top-line item, a hike in the woods that draws everyone from about-to-graduate seniors taking a breather from finals week to alumni like Susie Duke, C’83, who has returned to the Mountain for 12 years in a row to walk the trail with friends during the Associated Alumni’s spring Perimeter Trail Weekend.

One might assume that the completion of the Perimeter Trail must have been the culmination of a well-considered, carefully researched strategy. And, indeed, the idea for the trail is an old one, predating the laying of the first cornerstone of the University.

The idea for a route circumnavigating the Domain appears to have originated sometime around 1859, with Charles Barney, who had been hired by the nascent University’s trustees as their local agent. He envisioned a route around the bluffs called the Corso. This was never finished, but parts of the route are included in today’s trail.

In the 1930s, teams from the Depression-era Civilian Conservation Corps constructed some of the most heavily used portions of the trail. But the work to finish the links languished.

The 1979 summer work-study students headed out to the woods for a simple reason: Doug Cameron, then the director of the Sewanee Outing Club, had leftover budget money to spend before the end of the fiscal year.

The account was in surplus because some of the work-study students who were supposed to cover the information desk at the Bishop’s Common (which Cameron also supervised) hadn’t shown up for work. So Cameron decided to take on one of the recommendations of a just-completed 1979 land use study that included a sentence proposing that the trail “should be completed.”

Never mind that the report had only been presented to the trustees in April and was still to go before the Board of Regents. There was something in writing. By the time the regents met later in the summer, the work had begun.

“There was a lot of freedom in my job back then,” Cameron says. He started flagging the path for his summer workers.

Cameron recounted a question he soon got from Charles Baird, then chair of the Forestry Department: “What is this flagging in the woods?"

“I replied, ‘That is the Perimeter Trail.’ He asked, ‘Who authorized that?’ I replied, ‘The trustees when they approved the Land Use Study.’ He said, ‘They didn't mean to build it!’”

“I now consider the trail one of my greatest legacies at Sewanee,” Cameron added.

From 1979 until 1990, volunteer student workers and the occasional work-study student labored on completing the trail, until in 1990, Mr. and Mrs. Albert Roberts III, C’50, donated funds that enabled the completion and ongoing maintenance of the Perimeter Trail in memory of their son, Tate. Two years after the gift, in 1992, work on the trail was substantially complete.

John Benson, director of the Sewanee Outing Program, credits that single gift with making the trail a reality and ensuring its continued existence.

Steverson Moffatt, C’88, worked on the trail completion project while a student and president of the Forestry Club. At times, he says, student workers got “fairly aggressive” about clearing the right-of-way, only to have Biology Professor George Ramseur curb their enthusiasm with visits to the work site.

Even today, much of the trail is wide enough only to accommodate one hiker at a time, a deliberate choice to preserve the natural environment.

In recent years, according to Associated Alumni Executive Director Susan Askew, C’86, as many as 75 alumni head back to the Mountain to make the day hike during Perimeter Trail Weekend. “It’s 50-year-old people doing this thing,” she says.

“This thing” starts with a breakfast at McGriff Alumni House and includes a lunch spread at the Memorial Cross.

Ashly Maag, C’89, an investment manager in Asheville, North Carolina, is among those who came back this spring to walk the trail with fellow alumni. “It was a bucket-list trip,” she acknowledges.

She and a group of friends set off even before the official breakfast because they “wanted to do the whole thing.” They kept going even after they were drenched when they were caught in a downpour that included a thunderstorm. “We were going to do it come hell or high water,” she says.

Don Copeland, C’86, made the hike this year with his fraternity little brother. He says he prepared for the hike by losing 50 pounds. Copeland says returning to the Mountain to walk the trail has meant “re-falling in love with Sewanee.”

Susie Duke, the 12-year trail hike veteran, remembers what she called the “best part of the walk” this year, the steady upward incline of about a mile after passing Proctor’s Hall headed south. “And then, lo and behold, there’s the Cross right in front of you, and you know that you can rest at the foot of the Cross for a time.”