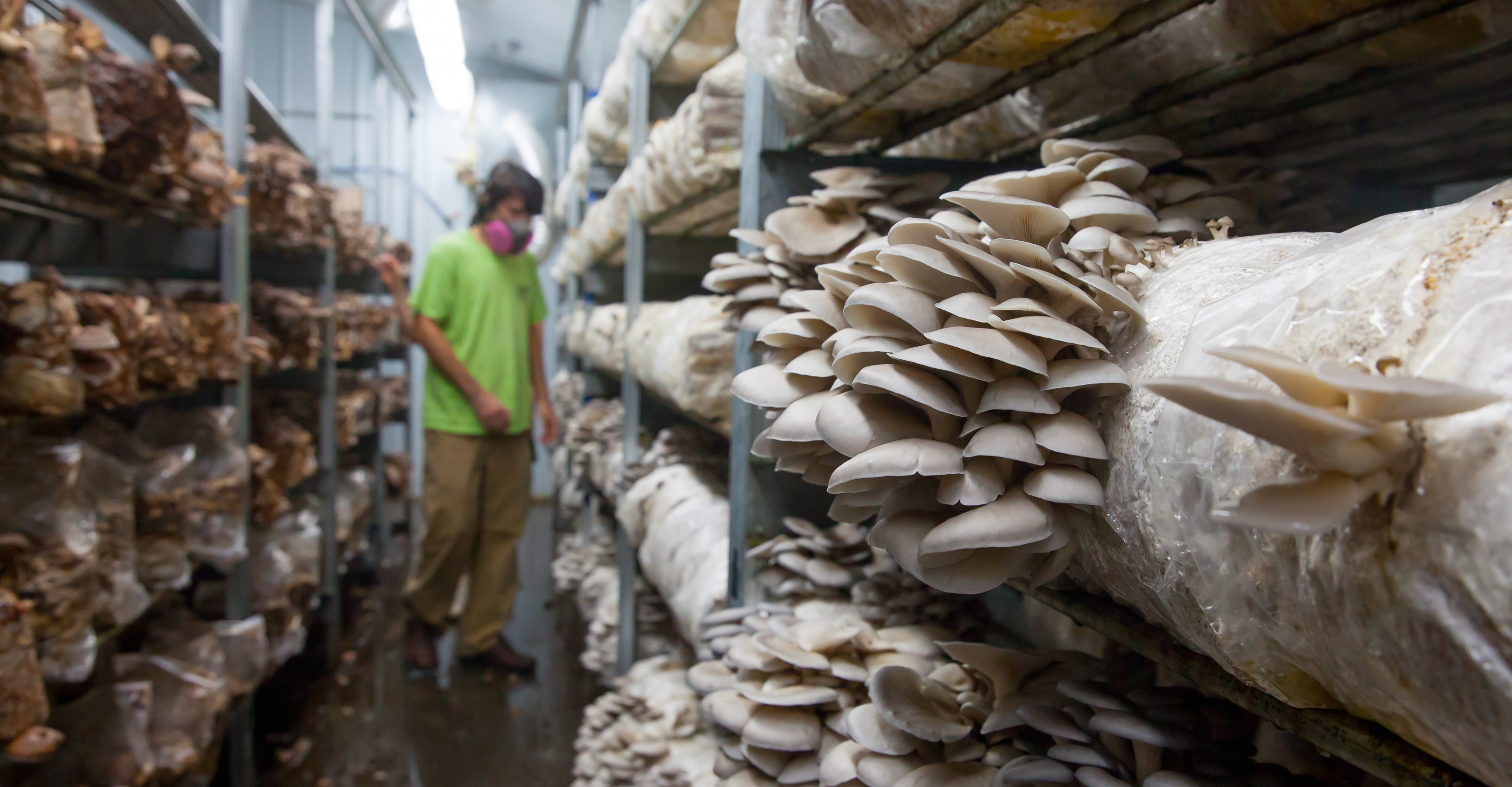 The Mushroom Magnates of Pelham

A t some point, Drake Schutt’s interest in growing mushrooms evolved “from a hobby to an unhealthy obsession,” he says. It might have started when his then-girlfriend, now-fiancée and business partner Katelin Hawkins led him on his first mushroom hunt to search for morels in the Sewanee woods, and it certainly grew when he took a class in fungus biology at Sewanee and began devouring books about mushroom cultivation. Wherever it came from, Schutt’s mycological preoccupation has grown from some early dabbling with kitchen experiments to a thriving business.

Schutt, C’13, and Hawkins, C’11, are the owners of Fiery Fungi, the largest purveyor of gourmet mushroom varieties in Tennessee and the preferred provider of locally sourced mushrooms for some of the nation’s top chefs. From their seven-acre farm nestled at the foot of the Cumberland Plateau in Pelham, more than 500 pounds of oyster and shiitake mushrooms make their way to kitchens and plates in Middle Tennessee every week.

A biology major at Sewanee, Schutt was initially interested in the environmental remediation properties of mushrooms—some varieties have been shown to remove environmental toxins and degrade oil spills. But his interest was soon drawn to the commercial potential of edible mushrooms, and he began experimenting with growing different varieties in the kitchen of the Monteagle rental house he and Hawkins shared. When Schutt’s experiments grew too space-consuming for peaceful cohabitation in the house, he moved them under the front porch (where, he says, neighbors became suspicious he was cultivating marijuana.)

The couple eventually set up in a warehouse in Tracy City near Fiery Gizzard (thus the name, “Fiery Fungi”), and then purchased the farm in Pelham less than a year later. There, they built a barn to house the growing operation, and since then Fiery Fungi has steadily ramped up both production and sales.

“There are two kinds of mushrooms,” Hawkins says as she opens the door to the growing barn for a tour. “Wood lovers and poop lovers. We only grow the wood lovers.” The most common supermarket varieties, white and brown button mushrooms, Hawkins explains, are grown on manure. In nature, the varieties grown by Fiery Fungi, shiitakes and oysters, grow on fallen trees. In the Fiery Fungi mushroom barn, they emerge from cubes of carefully prepared “substrate”—sawdust, soybean hulls, wheat bran.

The red metal barn is a 3,300-square-foot temple of fungal fecundity. Row after row of shelves hold blocks of substrate sprouting mushrooms at varying stages of maturity. Growing mushrooms is both art and science, and the barn also houses a separate lab for sterilizing substrate. Sterilization is a crucial step in the process, ensuring that mold spores don’t make it to the growing rooms, ruining the whole crop, and Fiery Fungi’s lab includes a custom-built pressure cooker for sterilization.

Once the substrate is sterilized, it’s inoculated with mushroom spawn, sealed in plastic bags and moved to the growing rooms. For shiitakes, the bag is eventually removed. For oysters, the bags are carefully slit and the mushrooms grow out of the opening created. Once the mushrooms are ready for harvest—three months for shiitakes, about a month for oysters—they’re sliced off the substrate, boxed and held in a cooler until they’re ready to be delivered. In no more than a few days, the mushrooms make it from Fiery Fungi’s barn in Pelham to some of the most coveted restaurant tables in Nashville.

James Beard award-winning chef Sean Brock of the critically acclaimed restaurant Husk Nashville has a rule about what goes on his plates: “If it doesn’t come from the South, it’s not coming through the door.” And when Brock wants locally grown shiitake and oyster mushrooms for the menu he calls “a celebration of Southern ingredients,” he turns to Fiery Fungi.

Brock is a star in the farm-to-table, local-food movement, and was one of Schutt and Hawkins’ most important early customers. Fiery Fungi’s push to move into the Nashville market coincided with Husk’s opening in 2013. At the same time, the local-food movement was gaining momentum nationally, as top chefs began to consider locally sourced fresh produce a necessity for their plates rather than a novelty.

Upscale new-American restaurant The Catbird Seat followed Husk as a customer and soon, a number of white-tablecloth restaurants in Nashville were featuring Fiery Fungi’s mushrooms in their dishes. “Having the right idea at the right time was really lucky,” Hawkins says. “It’s a niche market and we filled the niche.”

In 2015, Schutt and Hawkins made a deal with a distributor, Creation Gardens, that specializes in locally sourced ingredients and serves 600 restaurants in the Nashville area. They had to stop sales for a few months to increase production to meet the needs of their new distributor.

Selling through a distributor has allowed Schutt and Hawkins to focus more on growing mushrooms and less on delivering them directly to restaurants, which had been taking valuable time away from the farm. Schutt still makes a couple of trips to Nashville each week, filling his nine-year-old Honda Accord with up to 300 pounds of mushrooms at a time. (Their next big investment will be a refrigerated truck so they can deliver a week’s worth of mushrooms in a single trip.)

When asked how many times they eat mushrooms every week, Schutt says “Not as many as you might think. We try to sell as many as we can at this point.” Hawkins adds that after harvesting mushrooms all day, she doesn’t necessarily want to see them on her dinner plate. “You know if you play a video game for too long and you see it behind your eyelids when you go to sleep? It’s kind of like that with mushrooms. Sometimes there’s a shiitake print on your eyelids and you really don’t want to see them anymore."

“Yeah,” Schutt agrees. “But I’ll never get tired of your Hungarian mushroom soup.”

The couple can look forward to years of growing mushrooms and eating soup together—they’re getting married on May 1 in Hawkins’ hometown of Pulaski, Va.