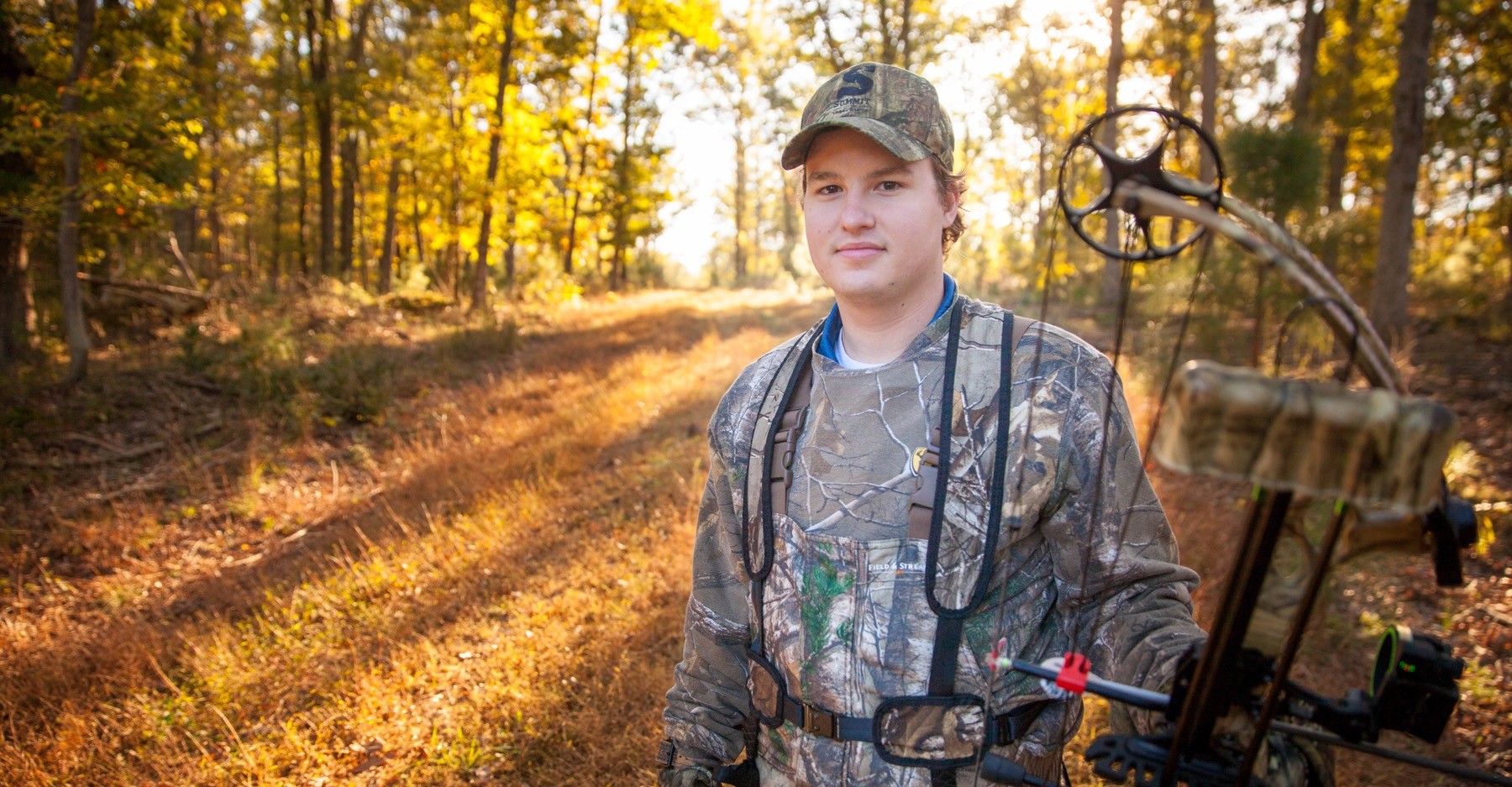 The Deer Hunter in Academia

A s Venus melts at the eastern horizon, the oak forest begins to glow. Its moist, 34-degree air in these last minutes before sunrise is windless and yet vibrating with life—a Carolina wren’s brisk alto, a raven’s raucous baritone, Highway 41A’s distant, grumbling bass. What I don’t hear, somehow, is the large wild animal as it materializes a stone’s throw away and aims its right eye dead at me.

Eli’s big chance, I think, heart racing, looking up to the tree stand to be sure he sees what I see. He certainly does. So why isn’t he raising his bow? We three freeze for a few seconds before the deer snorts out an alarm, like a raspy, explosive sneeze. Another freeze, and then the creature vanishes into the underbrush.

“How cool was that!!” texts the amiable young archer, whose mitten tops fold down when fingertips are needed. His next message explains why he didn’t shoot: Nubs near the ears indicated an immature, off-limits male.

The archer is Eli Walker, C’19, a natural resources major from Charlotte, N.C., in his third year of studying and hunting at the University of the South. He’s one of 55 volunteers authorized to participate this year in Sewanee’s cull of the swollen herbivore herd. And unlike many of his colleagues—who tend to be non-students with much more experience—he is still hoping on this fine fall day for his first kill.

Deer hunting is a decidedly low-profile feature of U.S. higher education, owing perhaps to its relatively recent emergence and concerns about the misuse of weapons. But Sewanee is hardly alone in welcoming such activity in university-owned woodlands near the central campus. Its comrades in arms include several other prominent schools outside large urban areas, such as Cornell, Clemson, and Penn State, as well as at least one—Duke—at the edge of a burgeoning metropolis.

The roots of this story generally snake back to the late 1800s and early 1900s, when unfettered hunting drove the whitetail to the brink of extinction in the East. Reintroduction efforts came with extermination campaigns against enemies of fawns, like bobcats; wolves had already been largely wiped out. The deer population, after recovering, exploded. Humans felt the fallout in farm and garden damage, car crashes and, by some accounts, diseases borne by deer-loving ticks. Survival of the forest itself came into question, because deer enjoy so many foods that grow at their level. Oaks, for one, can’t regenerate if all their acorns and seedlings are eaten.

Sewanee launched its counterattack in 2000, at first relying on the occasional efforts of police sharpshooters. The current, broader effort began a few years later and has claimed about 1,500 deer, shrinking the population dramatically. Domain Manager Nate Wilson says it’s still too big, at least in places.

Amen, says Biology Professor Jon Evans. He has published research on the area’s plants and believes deer have locally eradicated some species. Is the hunt helping? Evans says his vegetation monitoring, unsurprisingly, has found no evidence of that yet.

“The scientific literature shows that it can take decades for forests to recover from overbrowse,” he explains. “The deer cull is absolutely necessary for the protection of biodiversity on the Domain and probably should be expanded.”

David Haskell, another Sewanee biologist, suggests that the decades of deerlessness contributed to our beloved lushness of flora. In his nationally acclaimed book The Forest Unseen, he writes that wildflowers may“be experiencing the end of an unusual era of ease.”

Haskell supports the cull as a way of balancing ecological interests. “In some places we do indeed need to be active managers of the deer herd,” he says. “I think the University is now doing a very good job.”

Sewanee regulates hunting more closely than some schools and the state of Tennessee do. Volunteers, for example, must be University community members—employees and their relatives, students, invited guests—who have passed a criminal background check and safety course. Trespassers have been arrested, as recently as last year.

Hunting must take place in designated zones, at designated times, and at least 100 yards from hiking trails. It also must be done from tree stands, so an errant shot shouldn’t have far to go before hitting the ground. Most of the season is reserved for archers. Shotguns and muzzleloaders are allowed in some zones at the beginning of winter break, which is weeks after the state permits hunting with firearms. Students cannot use any guns. All weapons must be stored off-campus or with University police.

Wilson says he knows of no injuries to humans and only one confrontation in the field—a 2012 shouting match between a hunter and a hiker who “had a dog off-leash and off-trail in a hunting zone.” The hiker “apologized once he realized he was in the wrong,” Wilson says. “And the hunter was reminded that their instructions are always to call me and not get into an altercation.”

Sewanee’s deer harvest has fallen substantially in recent years, while the number of hunters has remained fairly steady. Two men, known for devoting weeks of vacation time to the hunt, stand out statistically. They accounted for well over a third of all kills when the harvest hit its high-water mark in 2013, for instance. Excess meat, Wilson says, is always given away.

Clayton Dickson, a 2016 graduate, grew up hunting and scored just once in his four years here. But it made a story for the ages: He butchered the doe at the Sportsman’s House, the themed residence hall where he lived with several like-minded guys (and a freezer), then cooked the backstrap with wild mushrooms for Vice-Chancellor John McCardell. “A great meal,” Dickson says. McCardell agrees: “A very pleasant evening.”

Eli Walker is a successful fisherman and feels his time is coming with a bow, too. “I’ve never gotten a shot off,” he says, but “I’ve come full draw.”

After he shares an extra camouflage jacket and sprays us both with an odor neutralizer and lets me follow him into the eastern Domain’s darkness, he speaks of how he got his start three years ago. “Self-taught,” he whispers, trying not to broadcast our presence to the ruminants. “YouTube. I didn’t have anybody to teach me anything.”

We stop to examine cloven hoofprints in the mud, by the light of a smartphone. “That’s a big track,” Walker says of one. “These were not here yesterday.”

His excitement is contagious. It doesn’t seem to wane after the young buck snorts and flees, or when another morning ends with empty hands.

“It’s the thrill of the chase, how hard you have to work for it,” Walker says. “I just like getting out. I like being in the woods more than I like being anywhere else.”