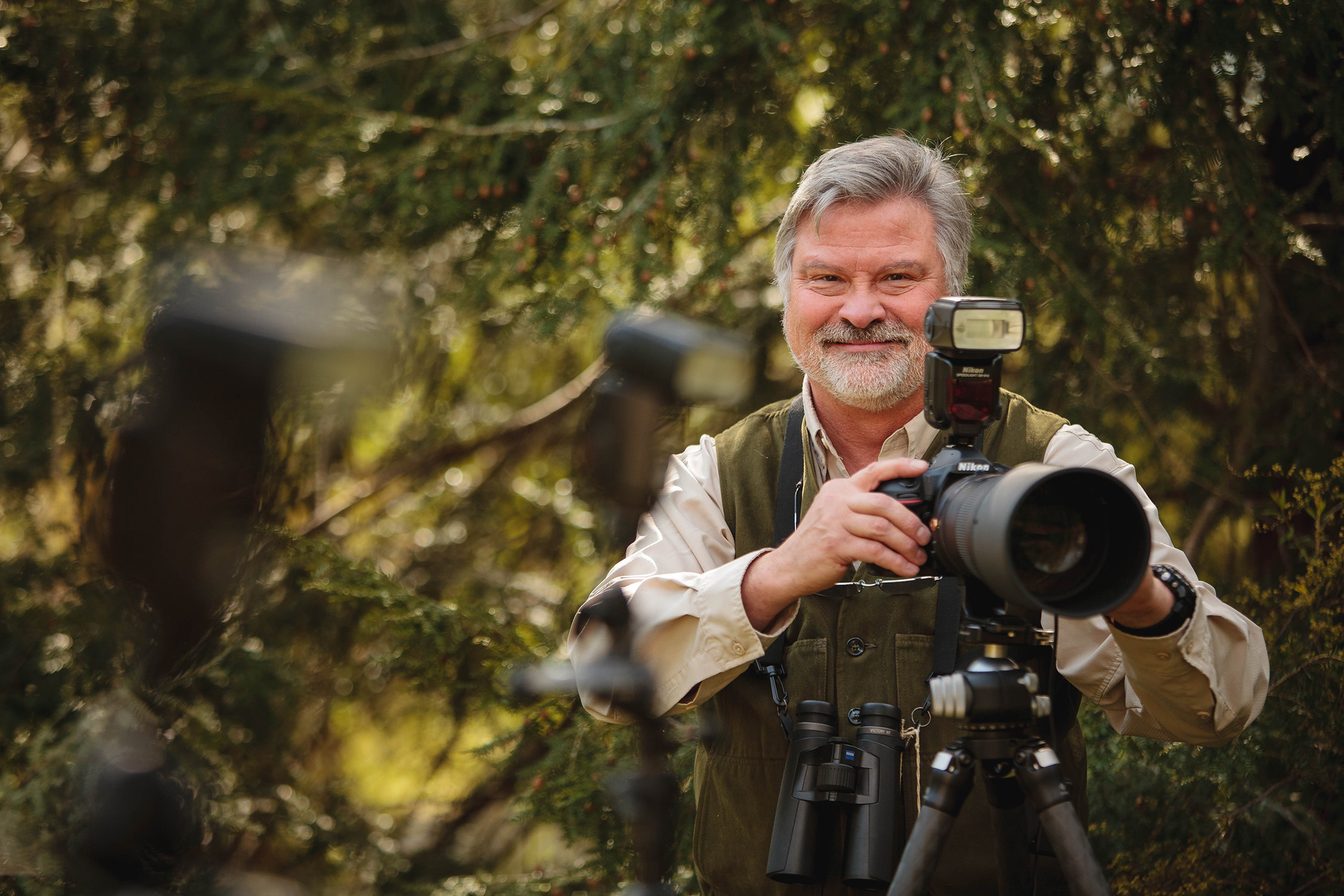 Birdwatching can be as simple as sitting on the porch with a cup of coffee to observe the nuthatches, finches, and cardinals that crowd around a backyard feeder for an early-morning breakfast and maybe to mutter a few choice epithets at the squirrels that somehow manage to defeat the “squirrel-proof” feeder design.

For Jim Peters, birds are much more: They are the creatures that led him to his life’s work, the study and teaching of “the love of wisdom”—the precise etymological definition of philosophy.

His pathway to teaching philosophy at Sewanee began as a young child, when his family moved to rural northern Illinois. There, he wandered the fields and woods, wondering about the mysteries of the natural world around him. When he was five years old, he found himself drawn deeply enough into the mystery of birds, their unknowability and their beauty, that he persuaded his father to take him to the first of what would be a lifetime of birder meetings.

Now, at age 60, Peters is still in love with birds—a man who’s been known on occasion to jump in a car, drive hundreds of miles upon hearing a report of a sighting of a rare bird, and then, after spending an hour or so watching and photographing the bird, turning around and returning to Sewanee in time to teach a class.

Like most serious birders, Peters keeps a record of each personal first sighting of a new species, what’s known as a “life list.” Peters’ list, confined to birds of North America, is currently at 693. He hopes to break the 700-species plateau before he dies.

What’s a list like this mean among birders? I called the American Birding Association and put the question to Bill Stewart, the ABA’s conservation director.

Many long-time birders might have perhaps 400 birds on their life list, while 500-species birders are much rarer.

And Peters? “I would consider him an elite birder,” said Stewart. “It’s pretty thin air” to reach a number that high. After all, he added, as far as is known only about 850 to 900 species of bird have been sighted in North America, and most of the ones not yet on Peters’s list are likely to be found only in obscure locales, like Attu, an uninhabited island at the far west of Alaska’s Aleutian Island chain.

Peters isn’t likely to make that voyage: About the only way to get there is by sea, and a birding expedition to Attu would cost more than a high-end luxury car. He knows the next seven spots on his list will be hard ones to fill, especially given his views about the relationship of humans and the natural world.

The kind of list-building that drives some birders to such extremes, he says, “becomes its own sort of consumerism,” the antithesis of what he tries to teach his students in courses on environmental ethics, and philosophy and literature, and in his role as coordinator of the University’s multidisciplinary program in environmental arts and humanities.

He’s just as capable of finding wonder and beauty in the outstretched wing of a female northern cardinal, the intricate perfection of the arrangement and placement of each feather, as he is at the sight of an osprey diving straight toward the water to capture a fish, or understanding how the design of the claws and tail of a woodpecker makes it possible for the bird to climb a tree and hang on tight while using its beak to carve out a nest.

“You can study birds a whole lifetime,” he says, and be just as enriched by observing crows and blue jays as exotic species. “We don’t have to own something to be enriched by it,” he says. Peters, though, is not above a bit of his own material desire, namely photographic gear to document his birding experiences. In one conversation, he admitted he had fantasized once about convincing his wife that a new $10,000 lens would be a “good investment for the family.”

I’d heard he was a seriously talented wildlife photographer, and when I asked him about his work, he invited me to stop by the family house one early April afternoon, a shake-shingled, slightly rambling country cottage on a back road between Sewanee and Monteagle. He was setting up an outdoor portrait studio to shoot bird photos.

His gear included five strobe lights, a grass-green backdrop, a tripod-mounted digital camera, and a battery-operated infrared trigger device that would order the camera and the strobes to fire when a bird broke the infrared beam.

There were three more parts to the rig— a bit of a dead tree mounted on a contraption that looked a lot like a big Christmas tree stand, a bird feeder loaded with seeds and suet, and a fiberglass dowel Peters used as a focus point for the camera.

The setup, despite all the wires, clips, and electronic gear, relies on one important truth about birds—they spend much of their lives in search of food.

Many birds live their whole lives a few hours from death by starvation. They also have to be aware that for the most part, they are themselves thought of by many of their fellows—birds of prey—as not much more than a good lunch. And then, of course there are cats. The Peters family has three.

The theory behind the photo setup was simple enough—when a bird spotted the feeder, it would check out the environment, land on the nearby dead tree, then fly across the infrared beam, trigger the camera and flashes, and grab a bite to eat.

The amazing thing is that the setup works. But once the gear is turned on and focused, the photographer steps out of the way and waits. There’s no way a human could manage to activate the shutter at the exact fraction of a second when the bird is in focus. So, when everything was set, we headed to the porch, contemplated the springtime sun, and talked.

Peters said one of the important themes in his approach to philosophy is the interdependence of our intellectual lives and our passions and emotions. He’s not a fan of what he calls “merely analytically taking the world apart.” Rationality, he says, is not the same as wisdom. Birds, he said, had awakened his passion for conservation ethics and helped him in his goal of “inviting students to find a deep respect and admiration for the natural world.”

He doesn’t, he conceded, spend much time talking about birds in class. “If I do, I’m going to get a lot of blank looks.”

One evening, Peters invited me to attend a talk he would be giving for a group of area birders, members of the Tennessee Ornithological Society. The ostensible subject of his presentation was the designation of 2018 as “The Year of the Bird,” in honor of the centenary of the first federal law passed to protect migratory birds. He showed the birders some of his photos but gave pride of place to a majestic portrait of a bald eagle taken by one of his children, Nadia. A son, Nate, is also an avid birder.

A professorial handout consisted of four quotations illustrating points he wanted to make: lines from Aristotle’s “Parts of Animals,” the poem “God’s Grandeur” by the great Victorian poet Gerald Manley Hopkins, verse from J.R.R. Tolkien’s The Lord of The Rings, and the lyrics to Muddy Waters’ blues classic “Got My Mojo Working.”

The choice of Hopkins and Aristotle are not clichés, but the references are standard academic citations. Tolkien he chose for an observation that “All that is gold does not glitter,” relating it to the way that goldfinches change from their winter plumage—dull brown—to brightest springtime yellow. But what about Muddy Waters? Well, that turned out to be as elemental as the blues itself. Springtime is mating season for birds, and the male birds have to entice the females with elaborate courtship rituals. Peters showed a series of shots of some of the exaggerated poses struck by a red-breasted merganser (a species of duck) to present himself as a potential beau. “Birds,” he said, “have mojo.”