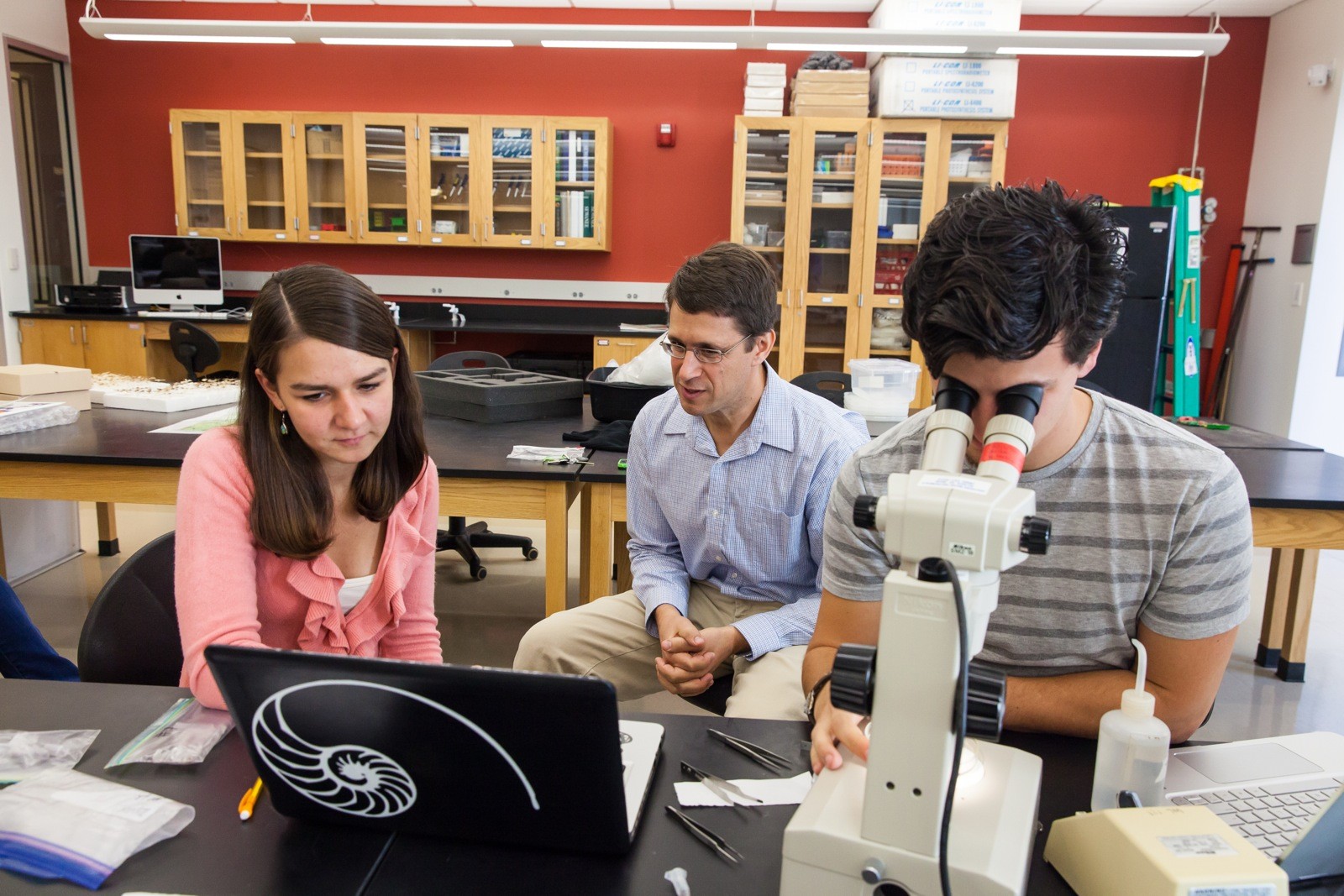 Sewanee students and faculty conducting a pioneering—and distinctly eusocial—study of Haitian ants get some help from a leading expert.

G eanina Fripp and Scott Summers, both C’16, are in the ecology lab in Sewanee’s Spencer Hall, surrounded by hundreds of specimen tubes, each containing a single ant. They lean in toward a computer monitor showing a curving graph. “It’s a rarefaction curve,” says Summers. “It’s showing us that we have kind of passed the point where it is likely we will be discovering many more species of ants.” The two students have been collecting ants as part of a larger, multidimensional project in Haiti. Their efforts enjoyed a boost this fall when David Lubertazzi, a post-doctoral fellow from Harvard, came to campus to take a look at the project.

“You’ll have to do some more hand collecting,” Lubertazzi tells them. “Flip over rocks and actually go out to find the ants that might be too shy for your traps and bait.”

Lubertazzi, arguably the world’s leading authority on Hispaniolan ants, spent several days with Fripp, Summers, and their professor, Deborah McGrath, looking at hundreds of ants the students had collected back in Haiti during the summer. When he came to campus in October, the team had identified seven species; by the time he left, the number had grown to 22.

The Hispaniola of Lubertazzi’s expertise is, of course, the island where Columbus first made landfall and is the home of Haiti and the Dominican Republic. One iconic image from the island is an aerial shot of the border between the two countries. On the eastern, Dominican Republic side, the forest is verdant, in stark contrast to the dry gulleys and brown dirt of Haiti to the west. Haiti’s tale of trouble began long before the earthquake of 2010.

In his quest to catalog the ants of Hispaniola, Lubertazzi has focused on the verdant side of that green line. So when he learned that a Sewanee professor and her students were studying the ants of Haiti, he was intrigued. Lubertazzi’s appearance in Sewanee was one outcome of a story long in the making at Sewanee.

Sewanee’s students, faculty, and staff have been a presence in Haiti for well over a decade, and Lubertazzi was introduced to the ant project by Sean McKenzie, C’11, who was part of Sewanee’s Haiti initiative in its early days. Coordinator of Outreach Ministries Dixon Myers has been leading an alternative spring break there and more recently, McGrath and Professor of Art Pradip Malde have been taking students to the island nation to build lasting impact through engagement in the community. McGrath has been doing work on connecting environmental health with human health, and Malde has been interested in how people can tell their own stories through documentary photography. Both have also been interested in the work of Dr. Paul Farmer, whose Partners in Health program was the subject of a 2003 book by Tracy Kidder, Mountains Beyond Mountains.

The reasons for Haitian deforestation are well documented. In a country where biomass provides fuel for cooking, a tree is a precious commodity. When faced with the choice between cooking and keeping a forest, rational people may well choose eating a cooked meal. A few years ago, observing that Hobbesian choice and listening to the people who made it, McGrath was inspired to wonder if people might be paid to grow trees as an ecosystem service. More trees mean healthier people and, at least on a small scale, a greener planet as the growing trees sequester carbon.

From this observation, Zanmi Kafe (Partners in Coffee) and its sister project, Zanmi Foto (Partners in Photography), led by Malde, were born, comprising the Haiti Institute in Sewanee. Using green fees contributed by Sewanee students, McGrath and her team are paying farmers to grow coffee trees until the trees are mature and bearing fruit. Such payments for ecosystem services are a recognition that a healthy environment has benefits that are not easily monetized. Trees sustain clean water, clean air, a better environment for agriculture, and more resilient human health profiles. Payments for ecosystem services monetize these benefits in ways that traditional commerce cannot.

And that’s where the ants come in.

As E.O. Wilson puts it in The Meaning of Human Existence, human beings are one of 20 genera in the entire history of the earth to be eusocial—dividing labor, raising young through intergenerational partnership, and the like. Most of the others are social insects, particularly ants. Ants comprise half the biomass of all animals with exoskeletons. All the ants on the planet also outweigh all the human beings. Among their other glories, ants are an excellent marker of biodiversity.

“We wanted to see how many species of ants we could identify right at the beginning of the project in these fields where farmers are planting coffee, so we could establish a baseline for biodiversity,” says McGrath. The biologist’s teams are also studying photosynthesis, and Malde’s photography students are working with the farmers on documenting daily life, in particular how resilient people can be in a stressed environment.

It’s a complicated project. During spring breaks, Dixon Myers’ outreach students visit the farms to make sure the coffee plants are alive and well, and to see how many are surviving. In 2016, they will also be joined by a seminarian from the School of Theology for that student to have a cross-cultural experience that will allow them to understand the world better. In the summers, McGrath and Malde lead student interns on the scientific study. Some students are working with counterparts at a local vocational school, Centre de Formation Fritz Lafontant (CFFL). After working with Zanmi Kafe for over a year, four students at CFFL wrote their senior theses documenting the project and research results to date.

Fripp and Summers’ success in capturing hundreds of ants is a testament to their own resilience. To do the work, they had to hike up a mountain and then walk miles to the farms where the coffee was planted, and accomplish the work before the daily torrential tropical rains fell in late afternoon. “We had two methods,” says Fripp. “We spread plastic on the ground and put various kinds of bait on it. We watch for 30 minutes to check ant activity, and then we collect all the ants on the plastic.”

The other method was setting pitfall traps, which they would leave overnight. But those daily rains turned out to be a problem. “We came up with cutting holes in Solo cups and placing them over the traps,” says Summers. “The cups kept the rain from destroying the trap and the specimens inside.”

“We did some of our best work, actually, after we had the offer to stay in a schoolhouse overnight,” says Fripp. “On those days, we could spend many more hours working because we didn’t have to walk up and down the mountain.” Those nights were also among the most social. The students would sit out on the porch of the schoolhouse, playing cards with the farmers, who would walk in from their homes. Under a single bare bulb, they played Go Fish and learned about each others’ lives. “They were all learning English, and we were learning Creole, so we’d go back and forth between the languages as we played,” Summers says.

“It’s amazing, really,” says McGrath. “In this devastated landscape, on just a few plots in the Bois Jolie area, our students were able to find so many species. We’re learning a lot, and we will certainly be able to publish, hopefully with Lubertazzi, on what we have found.”

The ant study is just one part of a project with many goals—social, spiritual, scientific, artistic. It’s demonstrably a eusocial project: a partnership reaching across generations and cultures. Appropriately, McGrath is also director of the Finding Your Place program that introduces students to college life through understanding their own place at Sewanee. The Haiti Institute at Sewanee is another example of how focusing on a place gives students opportunities for original research, community engagement, deep understanding of another culture, and a spiritual and intellectual grounding for their lives after college.

Zanmi Kafe and Zanmi Foto are supported by a gift from Wilma and Rick Sommer of Chattanooga and Alice Chenault and Milton Harris of Huntsville, Ala.