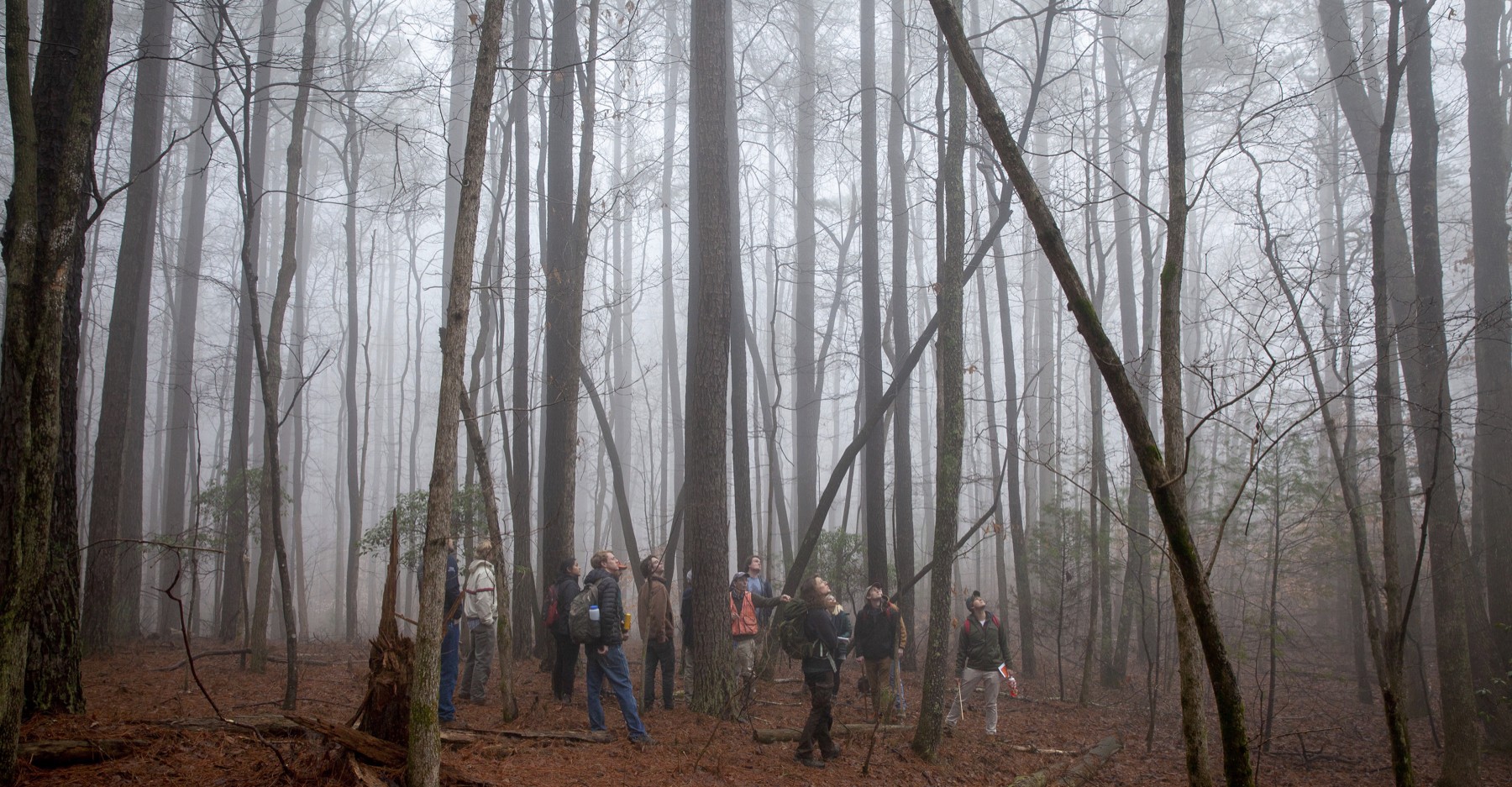 After more than a century of active forest management, Sewanee teams up with the Nature Conservancy to create a plan for the future of the Domain with an emphasis on biodiversity and resilience.

In late November, a group of conservation-minded citizens gathered at the home of Kate, P’95, and Robert Gooch, C’59, P’95, to celebrate a new partnership between the University of the South and the Nature Conservancy (TNC): the collaborative development of a new University Domain management plan that focuses on sustainable active management to promote biodiversity and climate resilience. After months of work, a public comment phase, and verification by an independent certifying agent, the new plan—the first since 2003—was ready to be announced.

On this warm evening, bats flew past large windows framing the view of Lost Cove as guests enjoyed wine and hors d'oeuvres. Had they paused to reflect, those guests might have found it easy to recall William Alexander Percy’s description of Sewanee in Lanterns on the Levee, published in 1941—“in the middle of woods, on top of a bastion of mountains crenellated with blue coves. It is Arcadia—not the one that never used to be, but the one that many people always live in; only this one can be shared.”

After greetings from Kate Gooch, a former TNC board member, Terry Cook, TNC’s state director, served as master of ceremonies. He first introduced Ken Smith, professor and co-chair of Sewanee’s Department of Earth and Environmental Systems. “These landholdings represent one of the first forests in the Southeastern United States to undergo such an assessment when Gifford Pinchot—then head of the nascent United States Division of Forestry—visited in 1898,” said Smith, recounting a history of forest management plans at the University spanning from the 19th century to today. According to Smith, Pinchot enlisted Dr. Carl Schenck, a German forester and founder of the Biltmore Forest School, to develop that first plan on the eve of the 20th century.

“Vice-Chancellor Wiggins brought in Pinchot and then Schenck because the Domain was really in poor shape,” Smith told the guests. In that groundbreaking 1899 forest assessment, Schenck was particularly concerned about unrestrained cutting; rampant fires, which had negatively affected the value of timber; overgrazing of woodlands by free-range farm animals; and encroachment by neighbors who were also doing a lot of the tree cutting, fire setting, and running of cattle and swine in the woods. The place was a hot mess.

While Vice-Chancellor Wiggins was a champion for developing the forest management plan, he was also concerned about the actual costs associated with forest management, and he said so as he sent the plan along to Pinchot in Washington, D.C. Pinchot soon replaced Schenck with another forester, John Foley, who published a new plan in 1903. Foley was scarcely more sanguine than Schenck had been, writing, “The present condition of the Sewanee forest renders the application of practical forestry an urgent matter. As a result of present methods, the property is steadily decreasing in value, and the best interests of the University demand that careful attention replace the lack of management that now prevails.”

Which brings us back to Arcadia. In his 1905 history of Sewanee, George Fairbanks had this to say of the Domain:

The University, having in the outset decided to maintain this property intact, adopted a lease system of its lands, under which a resident population of about one thousand persons are living upon the domain, which when acquired was a virgin forest which it has always been the policy to retain as far as possible for sanitary, aesthetic, and practical reasons, and hence we find, today, the University buildings and private residences surrounded and embowered amid forest trees.

Arcadia or Hadestown—which was it? Were Sewanee residents living in a utopia embowered by trees or in a sullied landscape, overtaken by resource misuse and feral hogs? Well, if this was an Arcadia where people actually live, as Percy claimed, probably both. These roughly contemporary and widely divergent accounts tell us something about how we viewed conservation then and how we view it today. Arcadia is not a fundamental, inherited condition. It is a state made possible by hard work.

That is the point of a forest management plan.

Domain Manager Nate Wilson and Amy Turner, director of the Office of Environmental Stewardship and Sustainability, described the work for the assembled guests that night as a long-term process. “You have to be aware that you are managing multi-decadal time scales. What we are trying to do is introduce complexity into the system. The more diverse the system is, the more likely the whole will be resilient. For example, one of our management practices has been to introduce shortleaf pine. It’s true that a different suite of animals will thrive in a shortleaf pine stand. This is a native species that had been all but eliminated here and is also heat- and drought-tolerant.”

While over a century has passed since the first Sewanee forest management plan and Carl Schenck’s warnings about mismanagement, the sense of threat is still present in the current work. “A lot has changed in forest management over the last decade or so,” says Trisha Johnson, TNC’s director of forest conservation in Tennessee, who is helping to implement the current plan. “Our forests are facing unprecedented threats that include unchecked development, non-native pests, and a rapidly changing climate.”

Accordingly, actions prescribed to manage the Domain will draw upon ecological and cultural data. The partners expect that, over the next 10 years, most of the Domain’s forests will remain intact and undisturbed. In some areas, forest management will take place, including prescribed burning and restoration of shortleaf pine habitat to benefit some wildlife species.

One benefit of the FSC certification is that when timber is harvested, it may be possible to sell forest products at a premium. The University may also be able to gain revenue by selling carbon credits, for which it is eligible to apply through the partnership. As Wilson explains, active management that includes both harvesting and carbon sequestration is completely congruent. “Basically you do three things,” he says. “Cut less than you grow, lengthen rotation (produce more two-by-fours and less toilet paper), and optimize harvesting for growth.” Wilson explains that in the Southeast, a forest’s ability to sequester new carbon reaches a plateau, and cutting some trees to encourage new growth can be part of a carbon plan.

“One reason we are so happy about this collaboration is that it gives us the opportunity to set our management practices against national and international standards,” says Amy Turner. “We really want to be ecologically responsible, and we believe we have been doing the right thing. Partnering with TNC and gaining FSC certification give us external measures for that.” For the crowd at the reception, Turner described the countless hours being spent by Sewanee students and faculty who work as stewards, monitors, and researchers. “By working with TNC, we can design and implement a well-informed plan that improves the forest for wildlife, students, researchers, and the local community who rely on the ecosystem services that the forest provides.”

The Gifford Pinchot-led Domain management plan is something of an origin story for Sewanee, particularly as it concerns the relationship between the University and its resources. The importance of that story is not always completely apparent, but it comes down to this: A healthy and restorative earth is not an entitlement; it always and only exists because of a good plan.