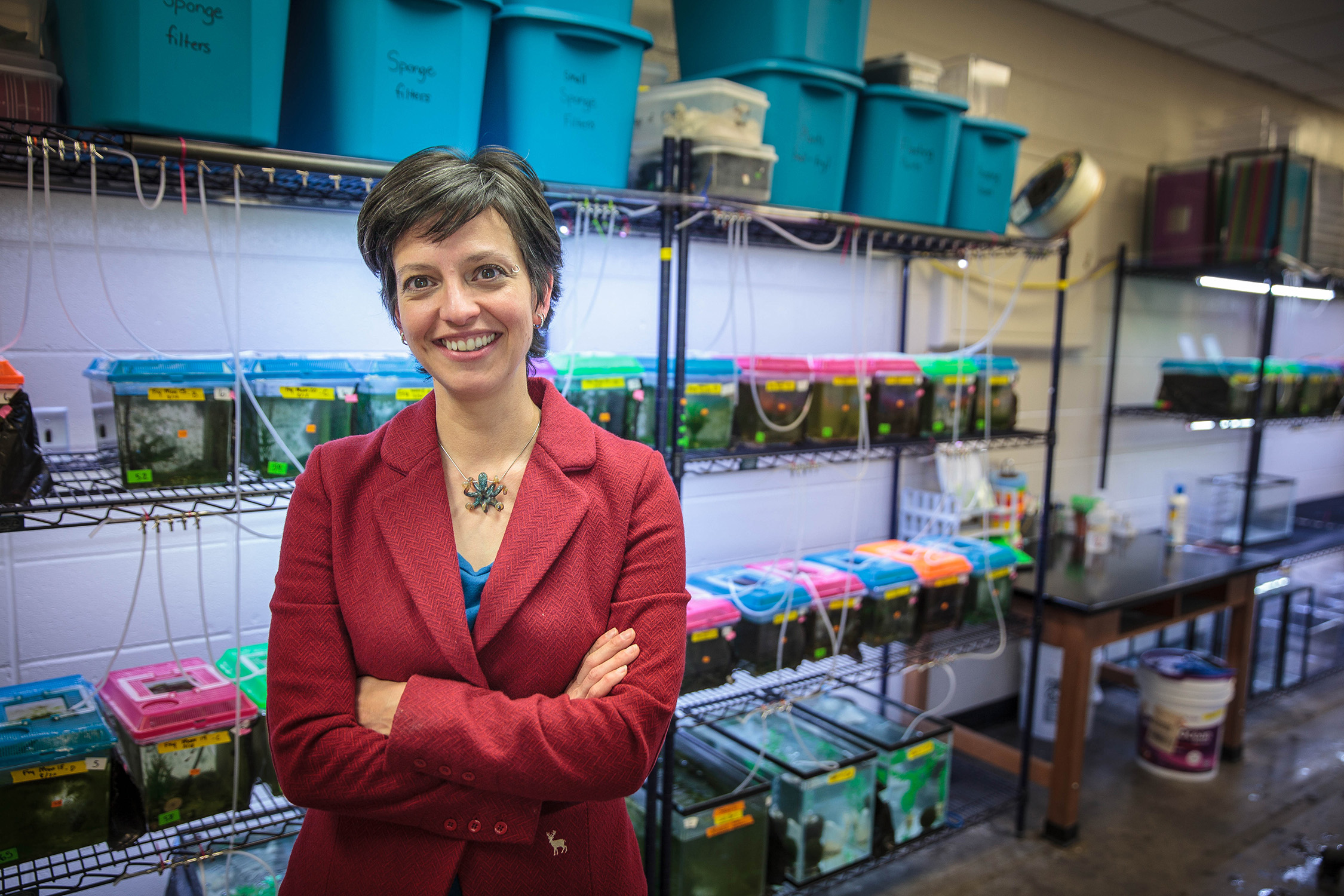 A Sewanee biology professor and her students look to shed new light on an age-old debate—by scaring some tiny fish.

Behind an unmarked door on the ground floor of Woods Labs, Katie McGhee is studying tiny fish from Lake Cheston as she seeks to tease out clues to one of the great puzzles of human life. It’s a question that has vexed everyone from philosophers and criminologists to biologists and theologians: What makes us the way we are? Nature or nurture?

For McGhee, an assistant professor of biology, the answer to that question isn’t “yes” or “no”; it’s more like “it depends.” She’s narrowed in on one specific question—the relationship between environmental stress and individual development.

With her effervescent personality and relaxed sense of style, McGhee is not the first person you’d think would choose to spend years in a small, windowless room filled with ranks of shelves holding small aquarium tanks.

You’d be wrong: She says she’s always been fascinated by animal behavior. “I could watch animals all day long,” she says—even little fish swimming around in seemingly aimless patterns.

She’s convinced more than a few of her students to join her in an unusual research effort that involves the close observation of tanks full of one of the more abundant species of fish in Lake Cheston waters—the humble mosquitofish, or, using its more elegant Latinate scientific name, the Gambusia affinis.

Specifically, the question that’s occupied McGhee’s research, since coming to Sewanee in 2015 after stints as a postdoctoral fellow at the University of Cambridge and at the University of Illinois is the effect that inducing stress in pregnant mosquitofish has on the behavior of their offspring.

What could a tiny fish (a fully mature female typically measures less than two inches long, and the males are even smaller), possibly add to our understanding of the development of such complex beings as ourselves? The very name of the fish, “Gambusia,” implies its status in the piscine world—it’s derived from a Cuban Spanish word that means “useless.”

Turns out, McGhee says, mosquitofish can tell us quite a bit about humans. The nervous systems of mosquitofish—and fish in general—bear a remarkable similarity to that of humans and other primates, and many of the hormones that course through the bodies of humans perform just the same functions in fish. It’s also well established that the nervous systems of fish and humans react to stress in very similar ways, releasing the so-called stress hormone, cortisol.

Studying stressed-out fish and their offspring has a great practical advantage over researching how human stresses are transmitted to the next generation: “Humans live too long,” McGhee says.

Still, by introducing “unnatural stresses,” experimenters can learn a lot about what happens not just to fish but to people when they are placed in stressful environments.

The impact of parental environments on future generations is a topic with existential implications for the future of individual lives, and, perhaps even for whole populations.

Consider, for instance, the case of the Dutch Hunger Winter.

In September 1944, near the end of European conflict in World War II, Allied forces were advancing toward Germany through the Netherlands. The Dutch government in exile ordered Dutch railway workers to strike, anticipating that stopping rail traffic would bring on a speedy German military collapse.

That collapse did not happen, and the Germans decided to punish the Dutch populace by abruptly halting food and fuel shipments to the western provinces where the strike was centered. The result was a famine affecting 4.5 million people. Somewhere around 20,000 people starved to death.

Among the millions of Dutch who survived the famine were a sizable number of children who had been born to mothers who suffered severe stress caused by months of deprivation. Many of those survivors had siblings born outside the nine-month famine.

This group of war babies has been studied for years—Nazi inhumanity had produced a controlled experiment on the effects of environmental stress on a human population. The studies revealed clear differences between famine babies and non-famine babies, including differences in long-term metabolic health. Recently, advances in DNA profiling have made it possible to identify specific differences in the genomes of these two groups—changes in the genome apparently brought on by the environment, not genetic inheritance.

Debate about the relative impact of environment and heredity have been going on for centuries, and these debates influence how we think about everything from criminal law to environmental legislation (not to mention simple questions like whether we have free will).

McGhee and her fish aren’t likely to settle the free-will issue, but a seemingly simple research protocol that involves stressing pregnant mosquitofish by showing them a model of a predator fish (in this case a large-mouth bass) and then observing how the babies respond to their environment can reveal a lot about the effects of maternal stress on the next generation.

McGhee is no stranger to scaring fish: At the University of Illinois, she worked with another small fish, the three-spined stickleback, and discovered that scaring gravid females before they laid their eggs produced offspring that were more likely to succumb to predators and showed learning deficits in areas like the ability to associate food sources with certain colors, compared to offspring from non-stressed moms.

McGhee’s new fish subjects have at least one important characteristic that may have a big impact on the next chapter in her research: Mosquitofish, unlike the vast majority of fish species, give birth to live babies rather than laying eggs. This means that it’s plausible to make correlations between changes to the mother’s hormonal environment throughout pregnancy to changes in their offspring.

On the other hand, showing a mosquitofish a plastic model of a bass for 30 seconds a day is perhaps more benign than leaving the fish in Lake Cheston, where they are so far down on the food chain that every day is potentially the last day in the life of a mosquitofish.

It’s too early to report any results for the mosquitofish experiments: The first crop of babies will be ready for study starting this spring. And then it will be time for the sometimes tedious but necessary behavioral assays, watching fish as they swim around in their plastic tanks.

Already, though, two of her students, Niko Darby and Kailey Bissell, both C’18, have completed independent studies on what mosquitofish learn from being exposed to stress or just by watching other fish respond to stress. Both their projects are being prepared for submission to peer-reviewed research journals. Darby was honored as the 2017-2018 recipient of the Harry C. Yeatman Award in Biology for his research.

Using fish experiments to find new ways to look at human health issues brings research to life for students and gives them tools to understand the complex interplay of environment and behavior on new generations. “You can think about it in the same way as culture,” McGhee says.

Nobel Prize-winning physicist Richard Feynman, one of the best-known scientists in the world at the time of his death, once observed, “Everything is interesting if you go into it deeply enough.” After a few hours of conversation with McGhee, the aptness of that epigram becomes apparent. This is much more than a fish story.

But I was still left with a nagging question: What happens to the fish after they do their bit for science? Are they flushed down the drain—the sad fate of so many pet goldfish? Do they have to go back to Lake Cheston and become some other fish’s afternoon snack?

Not a chance: Tennessee state regulations won’t allow the return of fish that have been out of their natural environment for more than half a day to be returned to the wild. And McGhee and her students are a kind-hearted lot, so they don’t euthanize them either. So, down in that windowless room in Woods Labs, there are lots of little mosquitofish living out their lives in what McGhee calls “retirement tanks.” Who would have thought it? Sewanee runs an assisted living facility for fish.