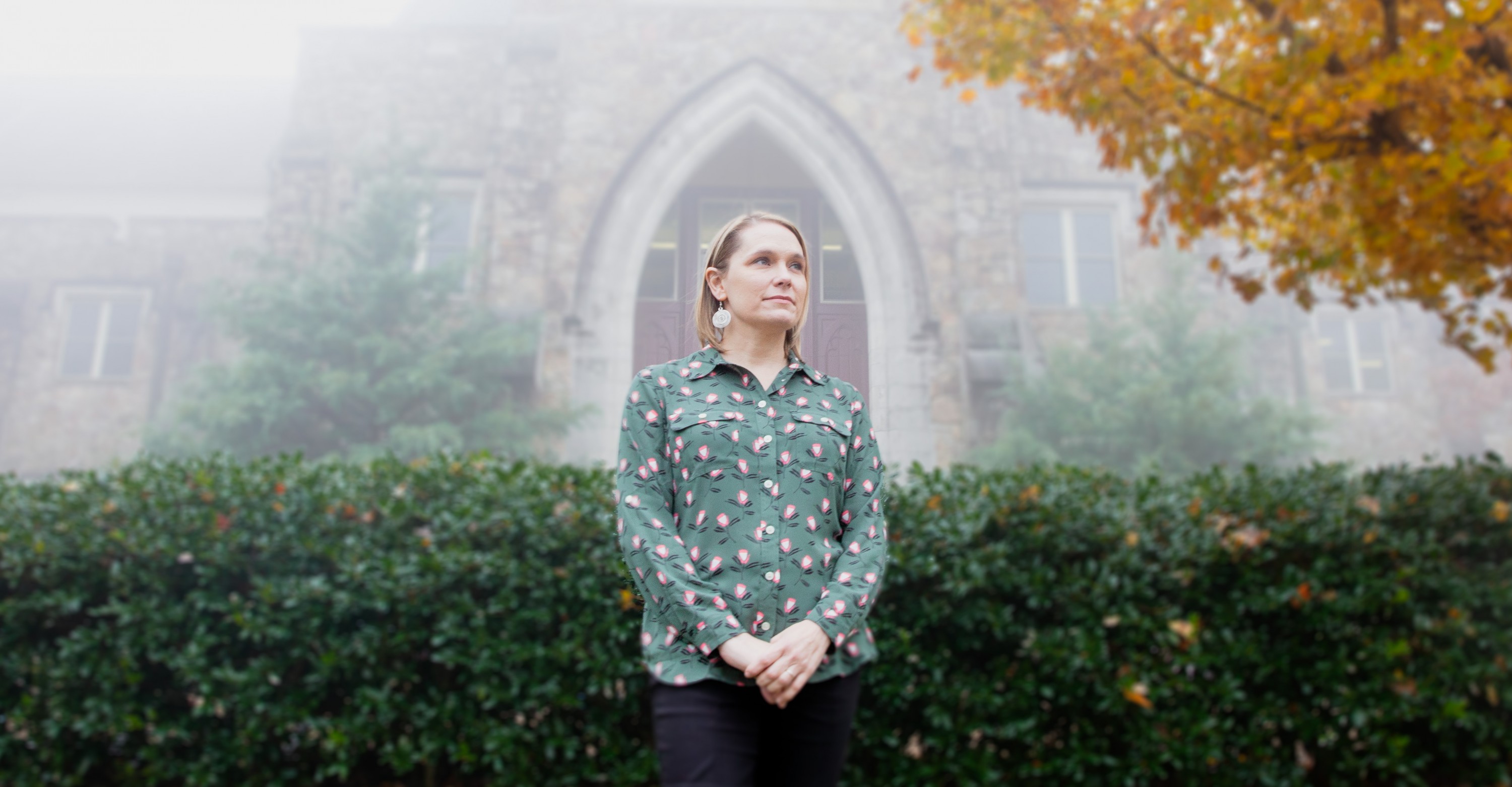 translation in the age of #metoo

Tapped as the first female translator of Ovid's Metamorphoses into English verse, Classics Professor Stephanie McCarter takes a hard look at the way sexual violence has been—and might be—portrayed in translations of the myths.

Three days later, Weinstein was fired from the production company he co-founded. Ten days after the Times story first appeared, actress Alyssa Milano, on Twitter, sounded a call to victims of sexual harassment or assault to tweet “me too.” It was a phrase first used by sexual assault survivor and activist Tarana Burke in 2006 to unite women and girls of color who were also survivors of sexual violence.

In the wake of Weinstein, new allegations mounted against powerful individuals, almost entirely men, across the arts, entertainment, media, politics, sports, technology, and business. “Me too” turned into #MeToo, and a movement was born.

Today, #MeToo is shorthand to unify survivors of sexual violence, but it is also a rallying cry for change. Powered by social media, the #MeToo movement, created out of Burke’s desire to turn her personal experience into a collective push against systemic sexual violence, is working its way into everything from comment threads to campaign trails, from boardrooms to classrooms.

And for Stephanie McCarter, associate professor of classics, that means bringing #MeToo back to 8 A.D. Tapped by Penguin Classics to be the first female English translator of Ovid’s Metamorphoses into verse, McCarter is stepping to the front of a male-dominated lineage—one that finds itself rife with what she calls “distortions, omissions, and mistranslations” in her essay, “Rape, Lost in Translation,” published earlier this year in Electric Literature. For the characters of Metamorphoses—those chased, raped, groped, and assaulted—McCarter could finally lead their #MeToo moment.

At nearly 12,000 lines across 15 books, Ovid’s Metamorphoses stands as one of the most influential works of art in Western culture, inspiring future literary heavyweights including Dante, Chaucer, and Shakespeare. Completed around 8 A.D., the epic poem, written in Latin hexameter, traces a theme of transformation—and power—through more than 250 myths. Of these 250 tales, more than 50 depict sexual violence or rape.

Many previous translations have turned a blind eye to or reframed these scenes, positioning them as romantic and even titillating encounters where women are “ravished” or “enjoyed” without their consent. Other translations give a nod to rape but forgo more accurate translation in favor of euphemism, like translator Charles Martin’s “she gives in to him without complaint” or David Raeburn’s “the Sun was allowed to possess her” — each a description of the Sun’s rape of Leucothoe, a young woman caught in the crosshairs of a dispute between gods.

Leucothoe stands at the center of much of McCarter’s early inspiration for this new translation project. Before Penguin Classics approached McCarter, who holds a Ph.D. in classics from the University of Virginia, she found herself troubled by the lack of translations from which she could actually teach.

Channeling the frustration produced by inadequate and inaccurate translations, McCarter started her own side project in 2016 of translating Horace’s Odes and Epodes. Her work was picked up by the University of Oklahoma Press. When the translation is completed early next year, she will also be the first woman to have produced a complete translation of the four books of odes and 17 epodes.

Around this same time, another female translator, Emily Wilson, was working on a new translation of The Odyssey which was then published in 2017. As Wilson’s approach to righting the inaccuracies of previous translations picked up steam in the press, McCarter kept coming back to Ovid.

“Ovid is a text I have taught over and over again. So, I started thinking about the Leucothoe episode, which I first taught 10 years ago when I came [to Sewanee],” she recalls. “I remember teaching it out of Rolfe Humphries’ translation and thinking something’s just not right in the way he’s translated this. I didn’t have the Latin in class with me that day ...  so I went back and looked at the Latin [later] and said, ‘Of course it’s not right, because he’s hidden the rape.’”

In Book IV of Metamorphoses, Venus, enraged with the Sun for revealing her affair with Mars, the god of war, fills the Sun with desire for Leucothoe, a mortal. The Sun appears to Leucothoe disguised as her mother and then rapes her. Later, when the young woman’s father finds out she is no longer a virgin, he buries her alive.

In Humphries’ translation, published in 1960, he translates the rape of Leucothoe as:

And she, still fearful of the sudden vision [of the Sun],
Won over by that shining, took his passion
With no complaint.

The ambiguity surrounding Leucothoe’s consent that Humphries introduces, McCarter could not find supported by the Latin. Ovid uses the phrase vim passa est, which McCarter translates as “endured his force.” The same passage, as translated by McCarter, then becomes:

But though the virgin feared the sudden vision,
defeated by the brightness of the god,
she quit her protest and endured his force.

Much hinges on the word vim, the accusative form of vis. Translated as “force,” vis, in the ancient world, is connected to violence or aggression.

“If you are trying to overthrow the state, for example, you can be tried for vis,” says McCarter. “But you can also be tried for vis if you raped a woman who was off limits to you. The Romans didn’t conceive of rape as necessarily a unique kind of violence. It is very tied in to other types of violence. Rather than rape, I translate [vis] as ‘force.’ So, he conquered her with force rather than he conquered her with rape.”

By translating vis as “force,” McCarter accomplishes what many other translators have failed to do: opening the text up to a greater and more thorough interrogation of its depictions of sexual violence.

With this translation, vis shows that rape is a kind of power. It’s an abuse of power. Throughout the epic, Ovid uses the language of force to describe not only rape or sexual violence but also other misuses of power.

After her father kills her, the Sun tries to bring Leucothoe back to life. Ovid repeats the use of vis here.

“It’s really troubling when [the Sun] uses the force of his rays to try to bring her back to life after he’s used the force of sexual violence against her,” says McCarter. “So I think [the translation] enables you to see connections across the poem a bit better.”

The Leucothoe episode is unsettling in a different way than, say, the far more explicit and brutal depiction of the rape and silencing of Philomela by Tereus just two books later. The majority of translators don’t mince words here and name her experience rape outright. Others still though lean on words like “overpower” or “ravage,” verbs more likely to populate the pages of a dime-store romance novel.

It is this inconsistency in translation surrounding episodes of sexual violence, especially those like Leucothoe’s or, earlier, Apollo’s attempted rape of Daphne, which seem to say as much about the culture in which the translators are living and translating as the themes or societal takeaways of the myths themselves. What does it say about a culture that perceives Leucothoe’s silence as consent or overly sexualizes Daphne’s transformation into a laurel tree to escape being physically violated?

When teaching texts like Metamorphoses, McCarter first offers her students a content warning. Beyond just telling them that scenes of rape and sexual violence lie ahead, she provides students access to her motives, revealing how and why they’ll be interrogating these types of scenes. “I don’t want my students to ever think that the things we’re talking about in class are somehow removed from the world in which they live,” she says.

“One of the big questions we often focus on is did previous translators want to cover [rape] up because they’re uncomfortable with rape? In other words, they see it but don’t want this seminal work of ancient literature to be full of rape and violence so they cover it up,” she says. “Or, do they just not see it? Are their eyes not attuned to it and does it take someone who has been thinking in a scholarly way about gender and sexuality to see it?”

They’re questions apropos of the age of #MeToo. The myths and their translations open up a deeper critical analysis of the modern world. The gap between 8 A.D. and 2018 narrows when Apollo looks like Weinstein and Daphne an up-and-coming actress. Or the Sun a high-ranking public official and Leucothoe an entry-level employee. What is consent in the light of a power imbalance? Do present-day Daphnes and Leucothoes have a voice? When their stories are told, what is being lost in translation?

“I think one of the things that’s come out of the conversation that has ensued from Emily Wilson’s Odyssey is about the role of the translator and to what degree is the translator complicit in the misogyny you see in a text, the violence that you see in a text,” says McCarter. “No translator can remove herself from her cultural moment. Obviously, I can’t because I’m using my own cultural moment as a lens through which I read this text. That needs to be a part of the conversation more.”

Rather than being weighed down with the responsibility of the task ahead, McCarter, who is only in the very beginning stages of a project that she anticipates will take at least a couple of years, seems instead buoyed.

“It is possible to do a beautiful poetic translation in pentameter that is enjoyable to read, that is informed by the latest scholarship on gender in the ancient world, and that also takes into account our own cultural moment. These things are not separable. They can be unified, and that is my main goal.”

And it’s her students she wants to serve first. It was the lack of accurate translations available to them that first inspired the Horace project, and now the Metamorphoses endeavor. It is forging connections between academia and art, between antiquity and today, between us and them.

McCarter says, “When you tear apart an ancient text and you think critically about it and you don’t put it on a pedestal and then you see something from your own world that speaks to it, that resonates. I think that’s the moment where education happens.”