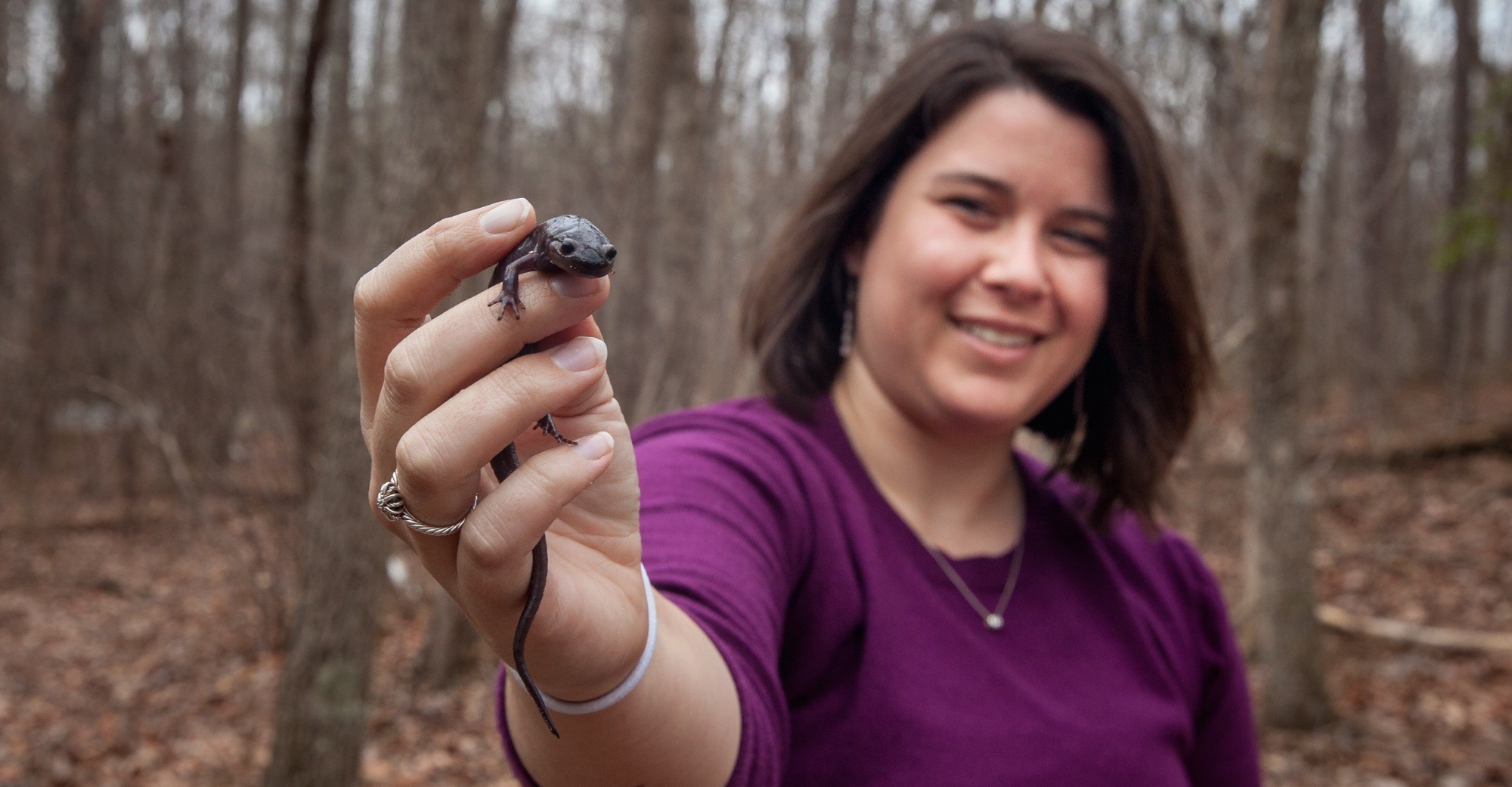 Kristen Cecala and one of her research subjects: a spotted salamander.

Assistant Professor of Biology Kristen Cecala and her students are answering questions about how animal species might respond to climate change, one salamander at a time.

A couple of years ago, Kristen Cecala and her students had a rough night. They had just set up a research site at an ephemeral pond in the woods off the western end of Breakfield Road to collect spotted salamanders (Ambystoma maculatum) for a long-term study. That night, more than 600 showed up in the traps, and each individual had to be measured, weighed, described, tagged with a visual tattoo, and released. A call went out, and Cecala’s students responded, many bringing friends along. Many hands did not make light work, but many students learned how to enter data and tag the animals.

“We haven’t had another night like that,” the assistant professor of biology said recently, sitting in dry leaves at the pond while holding a syringe with the tagging fluid in one hand and a writhing salamander in the other. “This year, they’ve been coming to the pond asynchronously, a few at a time, and we’re able to collect them with two or three students per day. That’s much more manageable, but fewer students have the opportunity to learn the tricky tagging procedure.”

The collection system is ingenious. Cecala and her students have built a drift fence made of flashing material around the pond, which fills in winter and then dries up by late summer. Every 10 meters, a five-gallon plastic bucket has been buried with its rim at ground level next to the fence. Another identical set of buckets has been installed on the inside of the fence. On warm, wet evenings, amphibians head unerringly for the pond from as much as several hundred meters away to mate and lay eggs. When they encounter the fence, they turn right or left and walk right into the nearest bucket. That’s when the researchers do their collecting.

“We collect them, weigh them, and tag them as they come in, and then, several weeks later when they leave, we repeat the process,” Cecala says. “So we have a record of their general well-being as well as their population.” Along with noting the characteristics of each animal, the researchers pay attention to which buckets trap individual salamanders, because that location tells Cecala the general direction from which they arrived and by extension where they will return. “We get more salamanders from the buckets on the north side of the pond, and that is also the straightest line to a cove stream,” she explains.

As amphibians, salamanders need water for breeding, and they also need a moist environment to thrive. Some respire through their skin, so keeping moist is critical to their survival. In fact, one of Cecala’s research projects is determining if the Cumberland Plateau can offer “climate refugia” in a warming and drying climate. Last summer, that work earned Cecala the inaugural Raymond D. Semlitsch Research Award, named for a pioneering herpetologist and awarded by the Herpetologist League. While the idea of refugia suggests that the work is about the place, the study had more to do with how interactions among individuals are affected by environmental changes occurring on the ground: Are individuals more aggressive when the temperature goes up? Are some animals forced to locate to less ideal habitat? And do these interactions foster species health or lead toward extinction in a warming world?

The Breakfield Road research station is just one way that Cecala and her students are advancing amphibian research. “I’m trying to understand how these animals behave over an environmental gradient,” she says. The population study, looking at one species in one place, fits into that idea because the Sewanee researchers are building a long-term understanding of population data. Along with tagging the animals, the researchers enter a coded description of each animal in the database. The spots on spotted salamanders vary from individual to individual, so Cecala is building a database of the animals based on their spot patterns. She and her students will eventually be able to understand the population at the level of individual salamanders, connecting behavior with species-level events. The system is similar to one used by scientists studying orcas, which have distinct black and white skin patterns.

At the research station, Georgie Huber, C’18, is excited to find a four-toed salamander (Hemidactylium scutatum) in one of the buckets. All present admire the animal before releasing it undescribed and untagged, as the researchers are not tracking that species. “The four-toed salamanders exhibit some interesting behavior,” says Cecala. “Multiple females will lay their eggs in the same place, and then one of the females will stay behind to guard the eggs.”

While fieldwork is a fun part of the research, attracting students who love nature and wildlife, Cecala’s research findings rely on more complicated analytical methods as well as experimentation. She does controlled studies, altering temperature and other conditions, both in the Sewanee herpetology laboratory and at a new research facility operated by the Tennessee Aquarium in Chattanooga. She has become an associate researcher for the aquarium, and the facility has resources to replicate a variety of field conditions, from mountain streams to pools. “We can alter water temperature and flow and watch to see how those changes alter behavior,” she says. One recent study in which she and her students participated shows that warmer temperatures can lead to fatter salamanders.

“The aquarium is really interested in freshwater systems,” Cecala says. “And a lot of what happens in a freshwater system happens in the headwaters. That’s where the study of salamanders really comes into play because the headwaters, like the streams that drain into the coves at Sewanee, are where these animals live.” Cecala is also involving students in the laboratory work at the aquarium.

Using data from the laboratory work, students develop mathematical models, learn how to use geographic information system software, and develop communications skills in order to discuss findings with the public. The work starts with the animal—the collection, the description, and the measurement—then blossoms out into more complicated analysis and academic work.

Cecala seems to be working with an ever-evolving set of hypotheses as she follows her curiosity about these animals and the environment in which they live. “You have to hear about the personality study,” she says. That study looks at where along an environmental gradient (from wet to dry, for example, or from closed canopy to forest disturbance) individuals with particular traits may be found. While salamanders are hesitant to cross forest disturbances like clearings, Cecala and her students have found individuals hanging out in those areas, and those salamanders are ones that have previously been identified as more sensitive to environmental conditions and more apt to respond successfully to environmental change.

Cecala is one of a growing group of scientists and scholars at Sewanee whose research is centered on water, water quality, and threats to freshwater environments. “Water is everything,” says Anna George, vice president for conservation and education at the Tennessee Aquarium and a visiting professor at Sewanee. “And the more we know, the better.” The roster of Sewanee water scholars includes professors in a range of disciplines including biology, earth and environmental systesm, politics, and economics. Projects include a new constructed wetland designed to study wastewater treatment; the Tenneswim, in which Sewanee is partnering with a German scientist and long-distance swimmer to characterize water quality along the entire length of the Tennessee River; groundwater studies looking at contaminants; and investigation of wildlife centered on ephemeral ponds.

Among these, Kristen Cecala has been most successful in building a student volunteer corps. This spring, 26 students are going out to check traffic at the research station, with only six of them receiving any academic credit. Out at the ephemeral pond, Georgie Huber reaches into the water and pulls out a mass of salamander eggs—two handsful. Cecala points out the features of the eggs, the embryos surrounded by a hydrophilic mass with little specks of green in a matrix.

“The spotted salamander is able to incorporate algae in its egg mass,” Cecala explains. “We’re not quite sure why that happens,” she adds, and it is just possible to see the wheels turning with a new idea for a research question. “Our study of the spotted salamanders of the Domain will be most useful years from now after we have lots of data over time,” she says. “We are already seeing many individuals coming back annually.” An ephemeral pond may be seasonal but it is also a persistent feature on the landscape. One might hope that the investigations being made by Cecala and her enthusiastic students will be just as persistent.