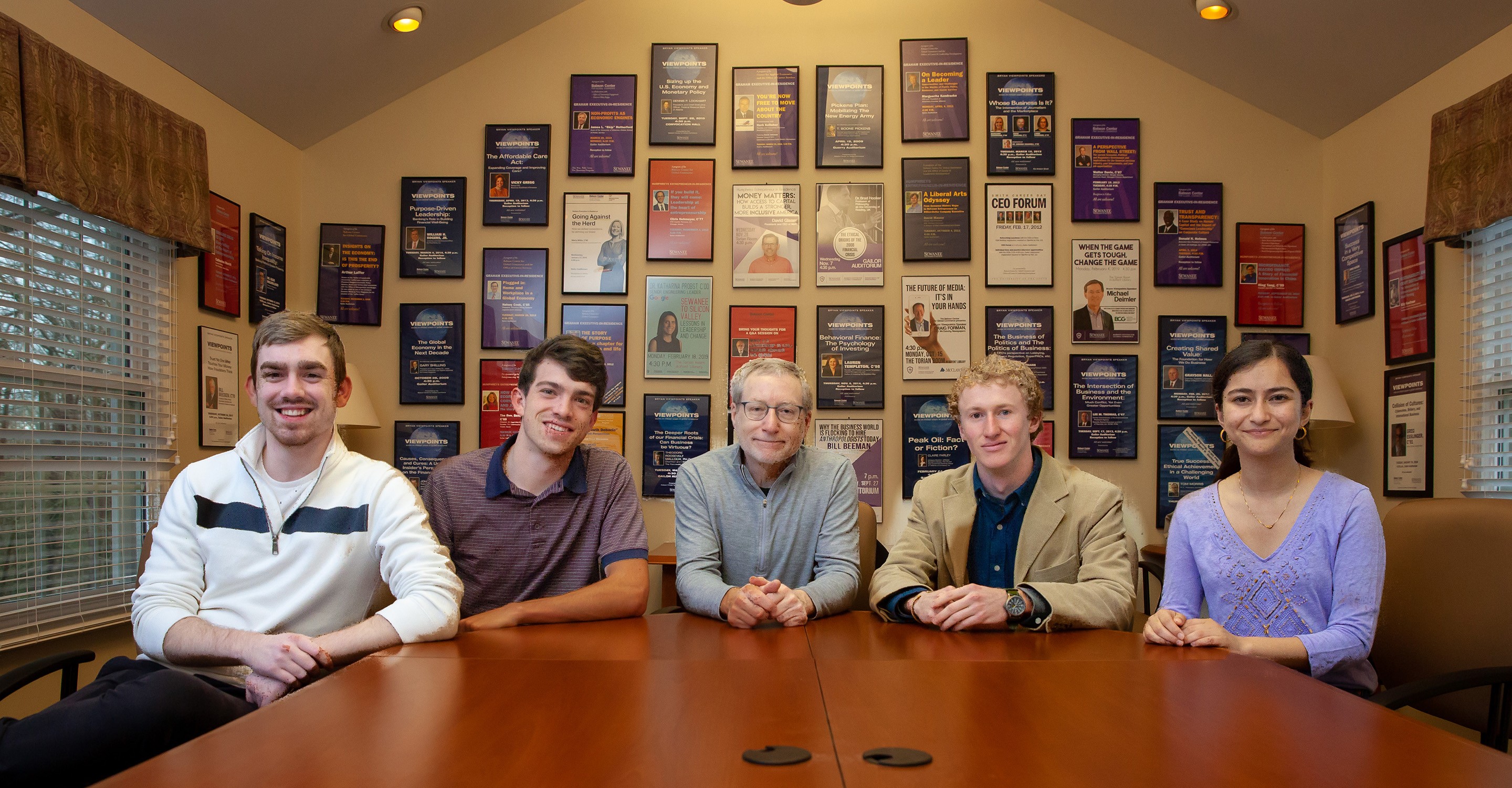 A student investment team looks to do well and do some good with a $2 million portion of the University’s endowment.

“Remember. This is an entirely different animal than SoCo,” cautions David Shipps, C’88, P’20, in an email about the social impact investing team within Sewanee’s student investment club, Green’s View Capital, for which Shipps is an advisor. The group has access to a $2 million piece of the University’s endowment set aside for investments identified by students that have a double bottom line—making money for the University and at the same time accomplishing a beneficial social impact in environment, health, development, poverty alleviation, and a host of other social goods.

The potential confusion here is that two of the students in the social impact group are also leaders in another student group, the Socially Conscious Investment Club, or SoCo, which started as an initiative to encourage the University to divest from fossil fuels and other sectors with perceived negative consequences. But while SoCo is reactive, identifying something some students do not want, the social impact investing group is proactive, investing in a cause or a business that embodies a public good.

“We’re really grateful to be part of this,” says Jackson Campbell, C’20. “Through SoCo, we went to the vice-chancellor and Doug Williams [C’81 and the University treasurer] to talk about divestment, and they challenged us to prove that our ideas were both financially and socially responsible. Having the opportunity to do social impact investing helps us do that analysis.”

“Our goals with SoCo are really about awareness,” adds Wilder McCoy, C’20. “Students should at least know about how the investments made on their behalf align with their values. The social impact investing has a different goal, which is really changing the world for the better in concrete ways.”

One might say that these students have a double bottom line—learning and change. And despite his cautions about confusing the two projects, David Shipps agrees. “The University asked the group to apply some real analysis to their idealism, to consider their assumptions, and then when a tool was available to help them do that, it was put it in their hands. I think that is a tremendously important example of education in action.”

In late February, the group’s first investment, a $200,000 bond with a three-year maturity and expected return of 2.5 percent was approved by the investment committee of the University’s Board of Regents after a presentation by the students.

In the conference room of Sewanee’s Babson Center for Global Commerce, the students gather to debrief that first foray, with Shipps and Scott Satterwhite, C’79, the benefactor who made the social impact investment fund possible and challenged the University to match his generosity.

“How did the presentation go?” Satterwhite asks, and Shipps is quick to respond. “They did it without a blink. It provided a good template for meetings in the future.”

All agree that the first investment is “catalyzing a low-risk appetite in an area with high risk,” that being microcredit to new businesses in developing countries.

The investment committee has asked that students only invest in companies where Satterwhite has invested his own funds, and those of his firm, Sunu Capital, which he runs with Ben Schmerler, his chief employee. Schmerler lives in East Africa and travels the world to investigate the opportunities Sunu is considering. The company makes investments exclusively in the social impact sector, and for the next 45 minutes, Satterwhite pitches, without notes, five potential investments in agriculture, education, finance, and conservation.

While this is not the day the students will decide on their next investment target, one company, Sanergy, based in Nairobi, Kenya, is greeted with enthusiasm. Sanergy looked at the inadequate public sanitation in neighborhoods around Nairobi and came up with an interesting solution. They make high-quality toilets (robust porta-johns) and franchise them to entrepreneurs in the neighborhoods. Then the company collects the waste and transforms it into fertilizer and animal feed through the magic of soldier-fly-larvae composting.

That last bit of information gets McCoy’s attention. “We have a larvae composting experiment at the University Farm,” he says, and is clearly interested.

Sanergy, it turns out, is also the genesis of Satterwhite’s interest in social impact investing. After graduating from Sewanee in 1979 in economics, Satterwhite enjoyed a decades-long career in financial services, actively managing money and investments. Then a few years ago, a chance encounter led to a new path. “One day I ran into a friend at yoga class,” Satterwhite remembers. “She said I should catch up with what her daughter Lindsay was doing, so I invited Lindsay and her friends, who were home from college, in to the office to make a pitch to my partners.”

Lindsay Stradley’s pitch was for a nascent Sanergy, and she was working hard to realize a promising vision. “She and her partners came in with a pitch deck, and I was enormously impressed, so I made a personal investment in the company.” That pitch deck has now also been featured on the TED stage, and Stradley and Sanergy are getting good press.

Satterwhite’s investment also led him to a significant shift in his work life and the formation of Sunu. “Once you enter into the social impact sector, you start to become part of the network; you become a known quantity and you soon are presented with new opportunities,” he says.

Making this turn in career aligned well with a vision Satterwhite was developing with his family connected to their foundation, the William Josef Foundation. The family takes a long-term view of philanthropy. The decision-makers are Satterwhite, his wife Patty, and his son, Roswell. “My son, who was a history major, does comprehensive research on places that are doing great work in an area in which we are interested,” he says. “For example, we have been looking at food security in the Atlanta area, and we now have a really good understanding of who is doing what. We don’t respond to applications, but we will reach out to an organization and launch a conversation with them on how we can be a partner in their work.” The William Josef Foundation has supported organizations addressing homelessness, human rights, legal aid, and youth.

That focus on justice and equity made Satterwhite pause when the University approached him about a gift to the Stronger Truer Sewanee capital campaign. “At first I was not sure I wanted to do that. My family and I have thought hard about the direction of our philanthropy, and we are becoming increasingly interested in projects that have direct benefit to people in poverty or who are otherwise at the margins. But then it occurred to me that I could make this gift and also challenge the University to match it by setting aside a portion of its endowment for social impact investing.”

In the spirit of the double bottom line, Satterwhite was also convinced of the educational utility of a student-led social impact investing effort. “I was really thinking about the students,” he says. “Some of them have this notion that they are going to go into the kind of career I had, and that is becoming increasingly more difficult. Don’t get me wrong, I had a great career, but in many ways that path is over. Fees are a big headwind, and it is increasingly difficult for an individual to perform better than an index fund. So there are fewer jobs for stock analysts and money is moving from active management to index funds.”

By contrast, according to Satterwhite, the social impact sector is growing, and it is a sector that is pretty perfectly set up for analysts who have the kind of broad education that is the hallmark of small liberal arts colleges like Sewanee, because with a double bottom line, there is also a double analysis: the financial risk and return on one hand and the actual social impact the investment will have on the other. Notably, both these were in the original charge to SoCo made by University administrators when they made their divestment pitch.

Satterwhite believes this work should be particularly attractive to Sewanee students. “Young people find satisfaction in making a positive change in the world, and it’s good to connect their desire to learn economics and finance with those other impulses.”

The students’ experiences bear out this insight. Last year Campbell applied for a Biehl Fellowship in India (doing research abroad during the summer) but was not selected. So he went anyway and helped design a seven-kilowatt solar energy installation for a rural community. He’s been inspired by his work with the Social Impact Investment Fund and is seriously considering it as a career. McCoy is a double major in natural resources and international and global studies, is deeply interested in water resource management, and is trying to learn as much as he can about how finance has a role to play in water equity and water management.

Another student, Komal Kunwar, C’19, who has recently joined the group, had her own double bottom line for participating. “My interest in becoming part of this team was initially sparked when I learned about the $2 million fund being managed without diversity—by that I mean no women, no people of color. My personal goal is to change this during my tenure with this team.”

After graduation this May, Kunwar is heading to BrightHouse, a Boston Consulting Group company that, according to Kunwar, “helps businesses find a deeper purpose in doing business so that they can have a positive impact on their people and society along with profit.”

“I think there is a certain dichotomy in perception with impact and investment,” she adds. “People are quick to discount hedge funds and investment banks as a potential for social change. Similarly, people who dedicate themselves to social change may be naive to think they can do it without sufficient funding. This was my mindset when I came to Sewanee: it was very quickly that I realized that the good intentions I had about environmental stewardship, while noble, did not suffice. I am a strong believer that the move toward a sustainable world requires active and genuine participation from the private sector, particularly businesses, banks, and other institutions that have capital.”

With the first investment behind them, the student group is ready to embrace new opportunities. “We need to have a rubric for deciding among opportunities,” says Shipps in the pitch meeting. “For example, we might prefer local management teams or women-owned enterprises. We would not have to follow the rubric exclusively, but when we had competing meritorious investments, we could be reminded of our values.”

The students are eager to define those values and get on with the work, and, like Lindsay Stradley of Sanergy, ready to walk the walk. “We are not just investing in Fortune 500 and trying to make as much money as possible,” says McCoy. “We have a different vision of what investment can become.”