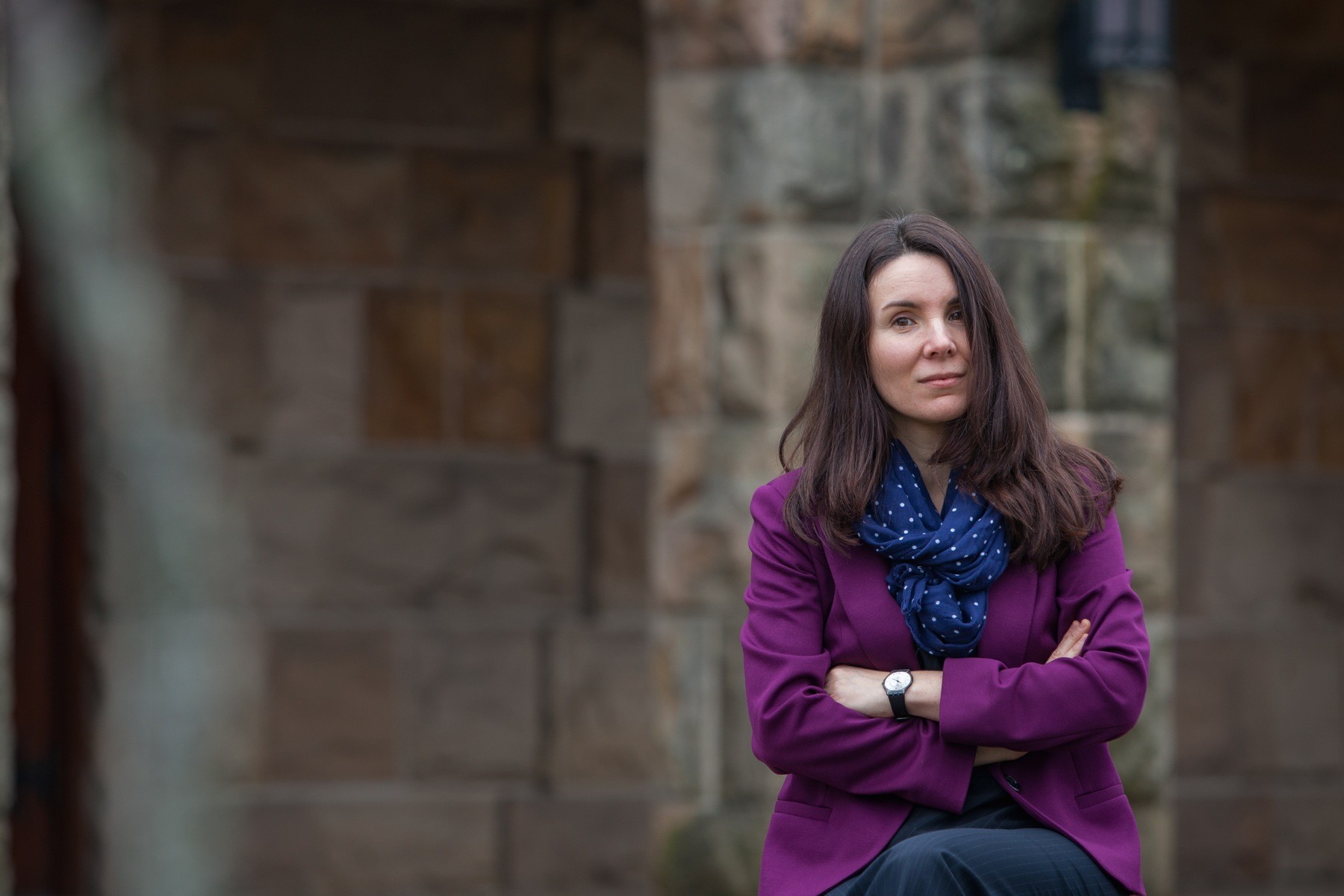 Informed by her own personal history, Associate Professor of Politics Mila Dragojevic travels the world to examine the conditions that lead to refugee crises, violence against civilians, and genocide.

A t 16, Mila Dragojevic was an ace student in languages in her native Croatia. She had studied French, German, and English and had the idea that she would be a philologist. She applied to a student exchange program and was deciding whether to go to Switzerland, the United Kingdom, or the United States.

That’s when the Balkan state she called home began falling apart, with neighbor turning against neighbor in a conflict that resulted from the breakup of Yugoslavia and the geopolitical aims of Slobodan Milošević, who incited Serbs in Croatia in an attempt to expand Serbian territory. Dragojevic and her family found themselves refugees. Though living in Croatia and having both Serb and Croat roots, the family identified as Serbs. They crossed the border to Serbia. But Dragojevic—already accepted in the student exchange program—was not there long, heading shortly thereafter to the Tidewater region of Virginia, where she was welcomed by a host family with whom she is still close.

“When the barricades go up, people have to decide which side they stand on,” says Dragojevic, who studies refugees, violence against civilians, and genocide as an associate professor of politics at Sewanee. Her personal educational journey was not a straight line: high school in Virginia, college at Tidewater Community College and Wilson College in Pennsylvania, and then an M.B.A. at the University of New Hampshire, followed by two years’ work in business. But she kept wondering about that moment in her life when her family had to leave home and country to go to a place where they were not completely welcome, so she returned to graduate school to earn a master’s degree in public and international affairs at Northeastern University and a Ph.D. at Brown University.

“That’s what happens,” she explains. “Leaders will appeal to ethnic identity to get people on their side, but then they do not remain faithful to those people when circumstances change.”

In her scholarship, Dragojevic is trying to fill holes in studies of situations where there is targeted and systematic violence against civilian populations. “Political science tends to focus on the larger geopolitical actors and downplays the role ethnicity plays in violence against civilians. Genocide studies tend to focus on atrocities and the people involved in them. I think both approaches have something to tell us, and I wanted to fill in the gaps.”

To do that, Dragojevic conducted interviews—in her native Croatia and also in Uganda and Guatemala—to shed light on the experiences of the people involved. She also did extensive archival work in public documents, including newspapers and trial records of the International Criminal Court in the Hague.

“We were not trying to establish guilt or innocence,” she says. “We were trying to understand what motivates ordinary people to act as they do when something so traumatic is taking place.” Dragojevic’s study has yielded an impressive publication record in peer-reviewed journals including Slavic Review, Ethnic and Racial Studies, and Nationalities Papers, showing, for example, that the pre-conditions linked with targeted violence against civilians include social and physical divisions among former neighbors as well as the exclusion of moderates through threats and violence. The research also shows that political leaders will cravenly use people’s fears of others to build support for their causes, and that while refugees may integrate economically into their new home countries, they often remain socially and politically marginalized many years after they settle there.

Dragojevic asked participants about conditions in their towns, their personal attitudes toward what was happening, their ability to stay neutral during conflict, and how they may have participated. “We did not push,” she says, but let themes evolve over the whole of the interviews instead of trying to get a complete picture from each participant.

Interviews lasted from 30 minutes to several hours, sometimes in a one-on-one setting and sometimes with a group. “I once met with eight World War II veterans in Croatia, and in Uganda, I met with 15 former insurgents at one time,” she says. Those interviews took multiple hours, with so many voices presenting different perspectives.

Dragojevic gained trust by using contacts in the communities where she was interviewing, and she honored that trust through her research methodology. With a promise of anonymity, she was able to elicit surprising revelations that form a deeper picture of human motivations and behavior. “They are not subjects of investigation. They are our teachers,” she says. “We are not after confession; we are seeking illumination.” And to protect that anonymity, she did all the analysis of the interview tapes herself, without using research assistants. Listening to the tapes, she methodically translated and transcribed each, listening for patterns of experience. Using qualitative data analysis software, she inserted codes into the transcripts to identify these patterns of behavior.

“I listened to the tapes so many times, I didn’t really need the software,” she says. While the software could analyze text, Dragojevic trusted her own ears more, spending hours with each voice to develop a picture of the participants’ experiences of conflict.

Across the subject areas, Dragojevic’s research shows that violence takes place where moderates have been pushed out—silenced, banished, or killed—leaving voices on the extremes to dominate the dialogue. When those moderating voices are not present, people are more readily divided into opposing camps, fearful of others. With ethnic identity exploited by political actors, ethnic fear is invoked, leading to a breakdown in social order. Other factors that can lead to violence are the creation of hard borders and the increasing ethnicization of people, which can lead to a kind of amoral community where violence becomes possible.

The idea of ethnicization is particularly interesting. In Croatia, there are no easily recognized physical differences between Serbs and Croats. Croats tend to be Catholic, while Serbs tend to be Orthodox, but few people attend church regularly. “Ethnicity is a consequence of war,” Dragojevic says. While ethnicity is tied to people’s personal histories, Dragojevic sees it mainly as a lever used to achieve larger political aims. That pattern is repeated in the other subject areas.

Dragojevic had the opportunity to conduct interviews in Uganda with funding from the McCrickard Fellowship at Sewanee. Unlike the situation in Croatia, the conflict in Uganda was an insurgency. While ethnicity was a factor in the Uganda conflict, she found that other factors that had been at play in Croatia (the exclusion of moderates and erection of borders) also had an effect on violence against citizens in Uganda.

The conflict in Guatemala, also an insurgency, exhibited the same characteristics. While Mayans were the target of genocide, Mayans were also members of the army that was committing genocide against civilians. “Creation of borders was really important in Guatemala,” Dragojevic says. “When the guerillas came into an area, they forced civilians to join them. No one could stay a moderate. Then when the military took back the same area, people were forced to join civilian patrols—basically policing themselves. The Guatemalan civil war was basically a war on the poor and marginalized, a kind of extension of the colonial legacy.”

In the case of Croatia, Dragojevic found that towns close to the Serb border were somewhat more likely to turn to violence than those farther away. “You don’t have much time to leave,” she says, remembering how her own community near the border turned violent.

Dragojevic’s intellectual journey took a sharp turn as a result of political strife and violence against civilians, and she has gone a long way toward understanding why those events took place. At the same time, her personal journey is connected to a larger family story. In the early 20th century, her great-grandfather immigrated to the United States, settling in Milwaukee. He was there for five years, until his family called him home to an arranged marriage, with the task of managing the family farm. In 1913, he returned to Croatia, just before the outbreak of World War I. That event proved fatal. He was conscripted as a soldier in the Austrian army, as Croatia was then part of the Austrian empire, and he died in the war.

In part, the prospect of taking up her great-grandfather’s story was a motivation for Dragojevic to choose the United States over Switzerland or the United Kingdom as an exchange student. But that story is also just another instance of the lives Dragojevic has illuminated in her research. When the ambitions of political actors to gain control collide with ordinary people, it usually does not turn out well for civilians.

Mila Dragojevic’s research has been supported by the McCrickard and Kennedy Fellowships at the University of the South and the Harry Frank Guggenheim Fellowship. Sewanee professors Amy Patterson and John Solomon helped her make contacts for interviews in Uganda and Guatemala, respectively. Dragojevic is also grateful for the assistance of the Rt. Rev. Carlos Lainfiesta of Guatemala as well as Canon Gideon Byamugisha, Professor Grace Muwanguzi Kyeyune, and James Claude Mutyaba in Uganda.