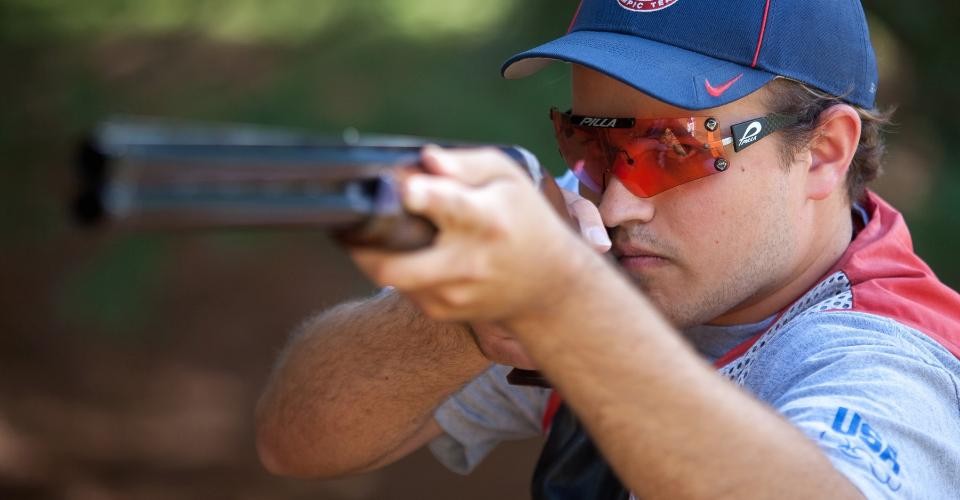 Wilks Halliday has been shooting competitively since sixth grade. When he was 16, he and his father built a training facility on the family farm near Columbia, Tennessee. Photo by Buck Butler

A Sewanee sophomore sets his sights on the 2020 Olympics.

W ilks Halliday stands, shotgun at the ready, on a rise above the house that his ancestors built before the Civil War. He leans into the March wind, whose southerly bluster rattles the roof of a disused pig shelter at his back.

“Pull!” he orders. Which, in the lingo of the modern sport he’s practicing, actually means “Push!” His dad dutifully squeezes a button, sending a fluorescent orange disc about the size of my wallet flying over the pasture at 65 miles per hour. Before I’m even sure I’ve spied the clay target, Halliday blows it to smithereens and catches the shell that his double-barreled Beretta ejects.

The 20-year-old Sewanee sophomore figures he has done this, oh, a few hundred thousand times now—more shots than most hunters take in a lifetime. He blasts away most weekends on the sprawling family farm near Columbia, Tennessee, with an extraordinarily ambitious goal: to make the 2020 U.S. Olympic skeet team.

It’s more than a pipe dream. Halliday finished fourth in skeet’s 2016 National Junior Olympics, up from 25th the year before. “That kind of shows the accelerated path he’s on,” says Kevin Neuendorf, spokesman for USA Shooting. “He’s among the leading junior shooters in the nation.”

USA Shooting oversees the formation of Olympic squads for shotgun, rifle, and pistol events. It’s based in Colorado Springs, where Halliday has competed in 10 skeet events over the past five years.

“I have zero natural talent at this,” says Halliday, whose manner manages to mix understatement with passionate self-assurance. “I have to train so hard.”

Training facilities are scarce, so he and his father built one. Neuendorf says that’s a common scenario. “They’re not city kids,” he says of many competitive shooters. “They’re country folks.”

Yet skeet is an elite discipline, one that has been called everything from an art form to “a game of trigonometry.” Some liken it to golf, in that relatively modest physical demands combine with great mental pressure to favor older athletes.

Competitors fire from each of eight stations, which are arranged in a semicircle between two throwing machines. After a shooter calls for a target, the machines randomly delay responding for up to three seconds. Shooters cannot raise their guns until a throw occurs. Sometimes they must hit two discs thrown simultaneously. It’s all done outdoors, so shooters must adapt to the elements—not just wind and sunlight, but occasionally rain and snow, too.

Generally speaking, competitive shooting is as old as shooting itself. But skeet is a johnny-come-lately. A group of Massachusetts men invented it in the early 1900s, aiming to hone their bird-hunting skills. Fast-growing popularity led to a magazine-sponsored naming contest, whose winner reportedly derived “skeet” from the Old Norse word for “shoot”—skjota. It became an Olympic sport in 1968.

As a young boy, Halliday hunted deer with a rifle. His shotgunning journey began as sixth grade approached, with a school team devoted to a cousin of skeet called trap shooting. “I absolutely fell in love with that,” he says. “I was that kid who stayed after practice and kept practicing. I would literally shoot all day long.”

By eighth grade, Halliday felt ready to make shooting his one sport. But he reluctantly remained on Zion Christian Academy’s football team because his bulk was in demand. “I had been praying about it,” he recalls. “I asked God how I was going to get out of this sport.”

The answer came during a summer-practice lineman drill, when “my body went one way and my knee went the other,” Halliday says. “I knew immediately why it happened.”

After surgery came two months of recuperation, during which he decided to focus exclusively on skeet. By age 15, he was flying to a competition in Texas—alone, because his parents had beef cattle and row crops and his younger sister to tend. Halliday was 16 when he and his father built the training facility. He hasn’t had a coach since.

“He’s not going to be involved in 20 different things,” says Stephen McCollum, his former guidance counselor at Zion. “He’s very selective. And when he’s all in, he’s all in.”

Halliday would be practicing and competing far more if not for the demands of college. “Academics come first,” he says, while also suggesting that skeet has made him a better student. “The pressure of shooting well comes into my regular life,” he says. “I don’t want to miss. I hate missing.”

Halliday hopes to graduate on time in 2019. But if the Olympic qualification timetable intrudes, “I would definitely consider suspending college.” His parents, he says, would support that: “They want me to follow my dream.”

What lies ahead for this politics major? Halliday muses about working on Capitol Hill, then answers my question with one of his own: “Do I want to be governor of Tennessee one day? If that’s in the cards, that would be great.”

Whatever happens with politics or sport, he plans to wind up on the rolling land that his family has worked for more than two centuries. There are 2,000 acres to mind as well as the Greek Revival mansion, which is listed on the National Register of Historic Places.

“I want to come back and preserve this place,” Halliday says. “And pass it on to my kids someday.” He sees himself spending lots of time up on the rise with his shotgun and the throwing machines.