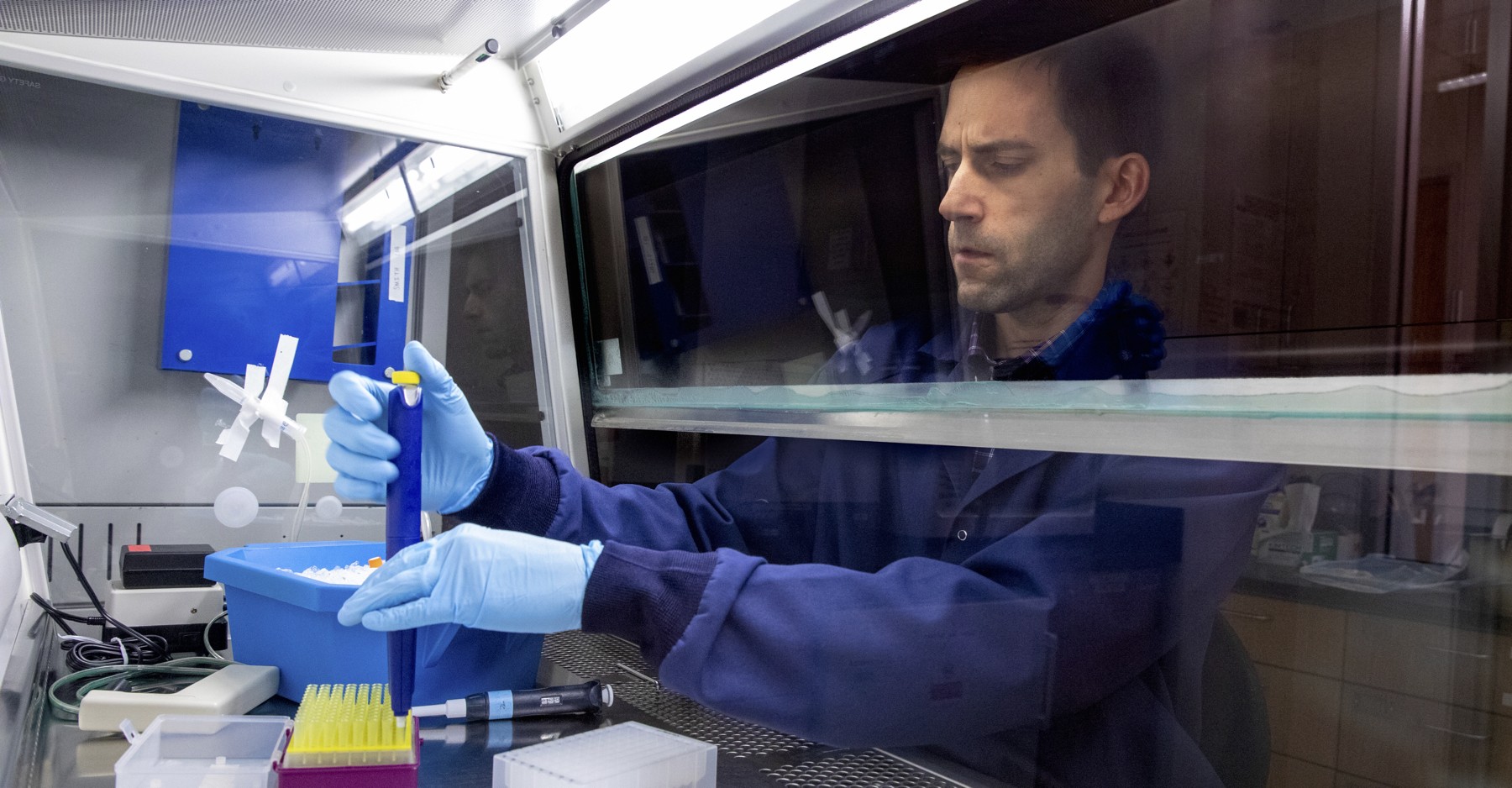 In the fight against a global pandemic, Assistant Professor of Biology Clint Smith’s work has taken him from a research lab in Sewanee to a testing lab in Chattanooga.

Clint Smith isn’t getting much rest these days. The assistant professor of biology teaches his classes remotely from his home in Sewanee on weekdays while simultaneously caring for his toddler daughter (the coronavirus pandemic closed the University’s daycare center, and Smith’s wife, Jori, is still working full-time as an occupational therapist at local hospitals). And then on Saturdays and Sundays he rises by 3:30 a.m. to drive to Chattanooga where he spends the day testing nasal swabs for COVID-19 in an innovative test facility set up by two Ph.D. scientists at the Baylor School.

In the early days of the coronavirus crisis, Baylor science faculty members Elizabeth Forrester and Dawn Richards saw a need that wasn’t being met locally. The school had international students returning from winter break who would need to be tested for the virus, and they decided they could conduct the tests themselves. By the time COVID-19 cases began showing up in Hamilton County and North Georgia in mid-March, the Baylor facility had cleared the regulatory hurdles necessary for testing, and became the go-to lab for the entire region.

But the lab needed experienced scientists to help conduct the tests, and they turned to Smith and Sewanee Associate Professor of Biology Alyssa Summers, another molecular biologist, to pitch in. “I had been working with Elizabeth Forrester for the past few years coming up with projects for her students,” Smith says. “She reached out, said they needed someone who knew about coronaviruses as well as biosafety, and asked if I was interested in trying to help them get set up and help run some of the clinical tests.”

With Smith and Summers’ help, the lab is now able to run 60 to 70 tests per day and return results on the same day, which means doctors and patients don’t have to wait five to seven days for results from distant commercial labs.

When Forrester and Richards added Smith to the team, they were getting a scientist who had extensive experience with coronaviruses and with biosafety protocols. Smith joined the Sewanee faculty in 2016, directly from a five-year postdoctoral research fellowship at Vanderbilt University, an internationally known center for virus research. At Vanderbilt, he was part of a research team that discovered that remdesivir, an antiviral initially seen as a potential treatment for Ebola, might well be effective as a therapeutic for a number of coronaviruses.

In 2014, as his postdoctoral fellowship was nearing its end, he was on track to look for a job at a big research university, but he had an epiphany: While he enjoyed the challenges of research, something was missing. He wanted to work with students as well as continuing his research.

“My job as a postdoc meant spending 40 to 50 percent of my time writing grant applications,” Smith says. “Our lab had about a $1-million-a-year budget that we needed to fund, so we were writing tens of millions of dollars of grants per year to get money to do research. We needed to publish quickly to advance coronavirus vaccine development or drug development.

This realization led him to switch from looking for jobs at big research-driven universities to looking for a small liberal arts college where he could spend time in the classroom without giving up his continuing research into coronaviruses.

Serendipitously, he found just what he was looking for at Sewanee, less than 100 miles from Vanderbilt. Sewanee is one of a handful of undergraduate liberal arts colleges in the country with a virology laboratory, and it’s almost certainly the only such institution with a faculty member who is doing cutting-edge research on the basic biology of coronaviruses to help design better antiviral drugs and vaccines.

The University had recently completed a new addition to its physical sciences facilities, Spencer Hall, which included a brand new molecular biology lab that included all the equipment he needed to continue his studies, and the University’s long-established commitment to student research meant his time working in the lab with students would be welcomed.

Smith was particularly interested in understanding how viral proteins work together to copy the viral genome. Viruses are weird. They are true parasites and require access to cells to reproduce and make new copies of themselves. But viruses are sloppy and frequently produce lots of incorrect copies of themselves, which can enable virus evolution, but can also decrease viral infectivity.

Coronaviruses though, have a special feature, the ability to “proofread” the copies of the genetic information that they produce inside cells they have infected. Finding a way to interfere with this proofreading might well be a key to creating coronavirus drugs or vaccines.

Smith’s lab is located behind a locked door in Spencer Hall, but it’s not a high-security facility even though the lab works with a coronavirus. That’s because the model coronavirus used in the lab is specific to mice, so researchers can work with the virus without having to observe the kinds of precautions they would with viruses that can infect humans.

Until the new millennium, coronaviruses were rarely studied because they were thought to produce generally mild illness. Smith recalls that his mentor at Vanderbilt lamented how little the coronaviruses had been studied until recently, because there was little apparent reason to worry about them.

All that changed in 2002 when a strain of coronavirus that could be lethal to humans, SARS-CoV, emerged in China and quickly spread internationally. Another strain known as MERS-CoV appeared in the Middle East in 2012, followed late last year by SARS-CoV-2, the virus that causes COVID-19.

The first two virus strains were either contained or geographically restricted relatively quickly but in neither case was a vaccine developed. But the rapid global spread of SARS-CoV-2 means that containment has proved to be an ineffective strategy.

Smith knows that the decision not to pursue a full-time career in research means he’s less likely to be the person who discovers a treatment for coronavirus diseases or a vaccine that stops the spread of the virus. He works with limits on both time and resources that reduce the odds that he and his laboratory team will be hailed with international acclaim and a Nobel Prize.

“I’m not under the delusion that what I do here will lead to a new therapeutic or a vaccine,” he says. But he’s OK with that.

“To me, the notoriety of being the discoverer or the adrenaline rush from knowing a new thing is less powerful than working with a team of interested students to build up and promote their own scientific curiosity.”

Today, Smith’s research has taken a backseat to the urgent need for COVID-19 testing in Tennessee. So, this weekend, he’ll wake up before his wife and daughter, and leave before sunrise to drive to Chattanooga to do his part.