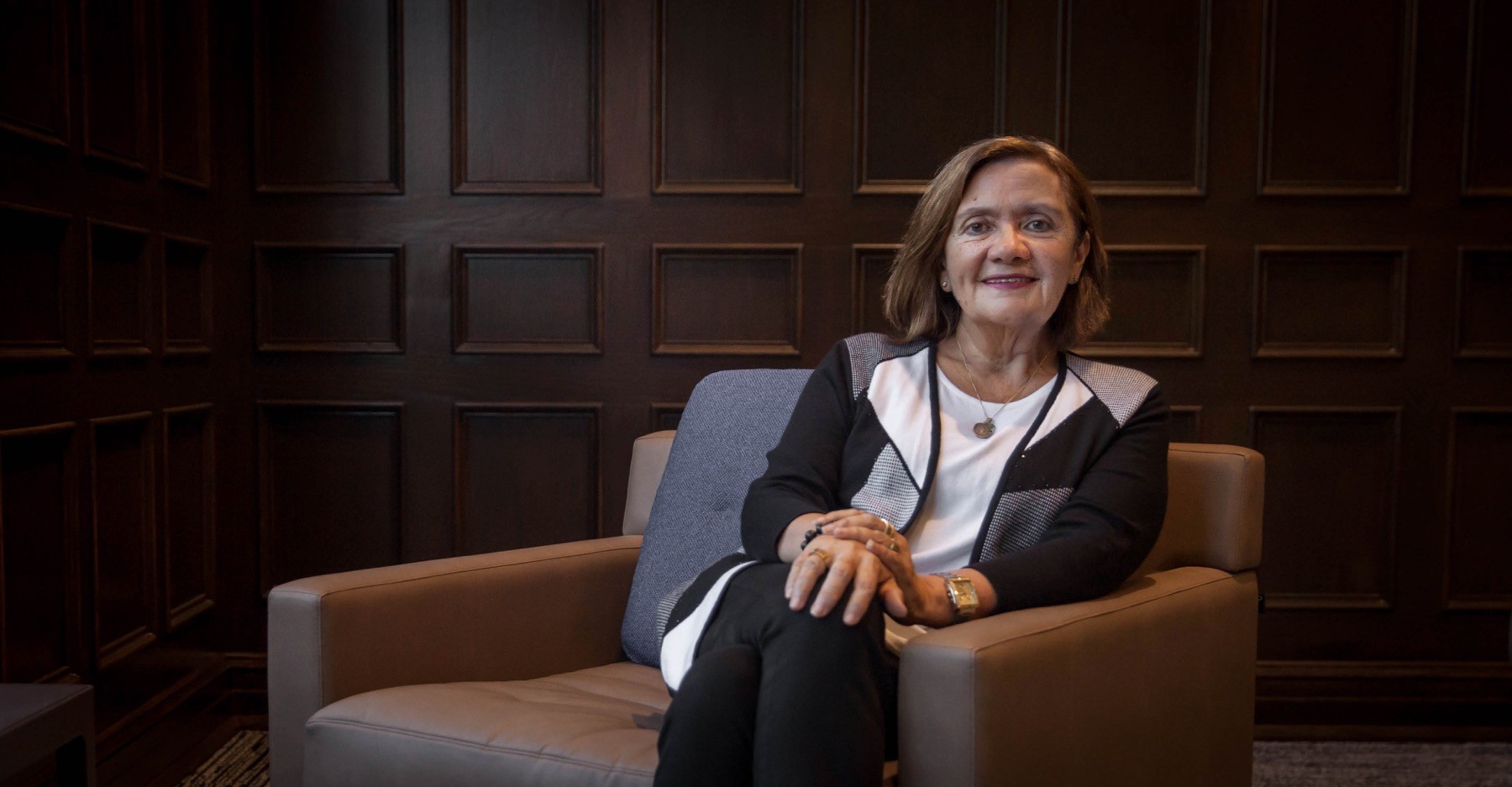 I n April, Carmen McEvoy, the Sewanee History Department’s specialist in Latin America, was in her native Peru. She was winding up a sabbatical year, preparing to return to Sewanee for the 2017-18 academic year, when she got an unexpected phone call.

On the other end of the line was the foreign minister of Peru.

He had an even more unexpected question: Would McEvoy would be willing to consider taking a leave of absence from her teaching and research to move to Dublin to become the country’s first-ever ambassador to Ireland? Peru’s president, Pedro Pablo Kuczynski, thought she would be a good choice, and had instructed the minister to sound her out.

“This was completely a surprise,” says McEvoy. “I had never met [Kuczynski] in my life.”

McEvoy discussed the unusual offer with her husband, Enrique Madico, and their daughter and son, both of whom live in the United States with their own families. When everyone agreed that she should explore the offer, she consulted her Sewanee colleagues and the dean, and gained the University’s blessing for a three-and-a-half year leave of absence. McEvoy accepted the post and then she and Madico hosted the minister of foreign affairs at their house for a lunch to learn more about her mission. Her granddaughters, Juliana and Emma, are particularly excited about the appointment: They’re planning a visit to look for leprechauns.

At the close of the current Advent Semester, instead of preparing for Christmas in Sewanee, McEvoy and Madico will be packing. Then, early in 2018, she will be driven in a ceremonial carriage to the official residence of the president of Ireland, where she will present her credentials as Peru’s first resident envoy to the Republic.

McEvoy has deep roots in Sewanee. She joined the faculty 22 years ago. But her Peruvian heritage has also made her a natural for representing her native country. Her family lineage is itself Irish, though she has never visited the country.

McEvoy’s great-grandparents were among a million Irish who fled the country in the 1840s, during what’s often known as the Irish Potato Famine, a time of great privation, hunger, and mass starvation. The two young people met during their sea voyage and married shortly after they arrived in Peru. According to family lore, when the two married, a translator had to be located, because the couple spoke only Gaelic. McEvoy’s great-grandfather found work as a carpenter, hewing crossties to help build the country’s railway from the sea to the Andes.

The young immigrants chanced their luck because Peru was a land of opportunity. The country was entering its most explosive period of growth, in the form of a guano boom. The discovery that seabird excrement—of which Peru had massive deposits left by millennia of birds—was a near-perfect fertilizer gave the world a reprieve from the seemingly inexorable Malthusian prediction that over time population would outstrip the food resources that could be produced.

During the 30 years between 1840 and 1870, Peru exported an estimated 12 million tons of guano, which lifted the country out of economic stagnation and attracted workers, investors, and speculators from all over the world.

The guano boom and subsequent bust is just one of the many episodes that mark Peru’s complicated and often contentious history, and McEvoy’s body of scholarly work elucidates the interplay of social, economic, and political forces in the emergence of contemporary Peru.

Prior to the Spanish conquest in the 16th century, the Inca Empire encompassed much of the continent’s western flank. The Incan imperial tongue, Quechua, is one of the country’s two official languages, along with Spanish, and political life reflects continued conflict about the proper relationship between the ancient indigenous culture and European colonization.

The country’s history since its official independence in 1821, is, to put it mildly, complex, and as late as the 1990s, the country was caught up in insurrections and armed struggles that highlighted fundamental tensions. Teasing out and clarifying the great themes of Peru’s history is a huge historiographic challenge, and McEvoy is admired for her scholarly attempts to do it.

Though many of her Sewanee colleagues and acquaintances don’t know it, McEvoy, a Guggenheim Fellow and author of more than a dozen books, is considered one of Peru’s most significant public intellectuals, a reputation significantly bolstered by a weekly column she writes for El Comercio, regarded as Peru’s most influential newspaper, with a national role similar to The New York Times in the United States.

“I think everybody [in Peru] knows who she is,” says Patricia Arévalo, the general director of the academic press at the Pontifical Catholic University of Peru, McEvoy’s Peruvian publisher.

Unlike many Peruvian historians, who tend to focus on details, McEvoy’s academic and journalistic writings examine both history and contemporary affairs from a broader perspective—“a panoramic view,” according to Arévalo.

“I admire Carmen a great deal, both for her scholarly work and the opinion pieces she often writes in El Comercio,” says Cynthia Sanborn, vice president for research at the Universidad del Pacífico. “[She is] always a strong advocate of democratic and republican values.”

“Switching [from academic life] to diplomacy is looking at the world through a different lens. This will be a learning experience for me,” says McEvoy. As an academic, she sees elements of the Irish experience that resonate with the Peruvian experience.

For example, both countries had to fight for their independence, and both contended with domestic terrorism—the IRA in both the Republic and Northern Ireland, and the Túpac Amaru Revolutionary Movement and the Marxist Shining Path rebels who continue to mount occasional assaults after decades of civilian and military attempts to eradicate the movements in Peru.

But McEvoy believes that both countries’ work at peacemaking offers a chance for learning.

She notes that Ireland is becoming a multicultural society. Earlier this year, Leo Varadkar, the son of an Indian immigrant, became the country’s first taoiseach, or prime minister, from an ethnic minority. He is also the predominantly Catholic country’s first openly gay head of government, and the youngest person ever to hold the office.

McEvoy says she plans to use the new embassy as a platform to promote commercial and cultural relations between the two countries. One of her secret weapons will be her husband, Madico, a master chef of Peru’s vibrant cuisine. For the past eight years, Madico has been working with researchers and food scientists in Peru to develop a way to turn fish meal from the country’s abundant fisheries into a palatable, non-fishy, high-protein food supplement to improve nutrition.

At the same time she received the request to take up the ambassadorial appointment, he was completing arrangements for commercialization of the powder, which could well become a major export. He will be moving to Dublin, too, taking his professional culinary talents with him to highlight the joys of Peruvian cooking.

One vegetable that’s sure to feature on the embassy menu is the potato.

Though by the mid-19th century the potato had become a staple for the Irish, the spud was only introduced to Europe by the Spanish in the late 1500s.

Genetic testing has shown that the species originally was domesticated in what’s now southern Peru about 7,000 years ago. McEvoy—ever the academic—says she expects to organize a conference on the potato in its multiple dimensions while in her post.

Another item high on her list is ensuring that the Irish find out about Sewanee.

“I’m planning to represent Sewanee; I’m taking Sewanee with me,” she says.

When she discussed the possibility of taking up the appointment with Woody Register, her department chair, and Dean Terry Papillon, she says she told them, “Sewanee is going to have a place in Ireland.” She hopes to build academic ties with Trinity College, Ireland’s most renowned university.

There’s something else she’s certain about: When her term as ambassador ends, she will be returning to Sewanee, to the family home on Old Farm Road, and to her students. “I know I’m coming back to a place that gave me so much and is so close to my heart.”