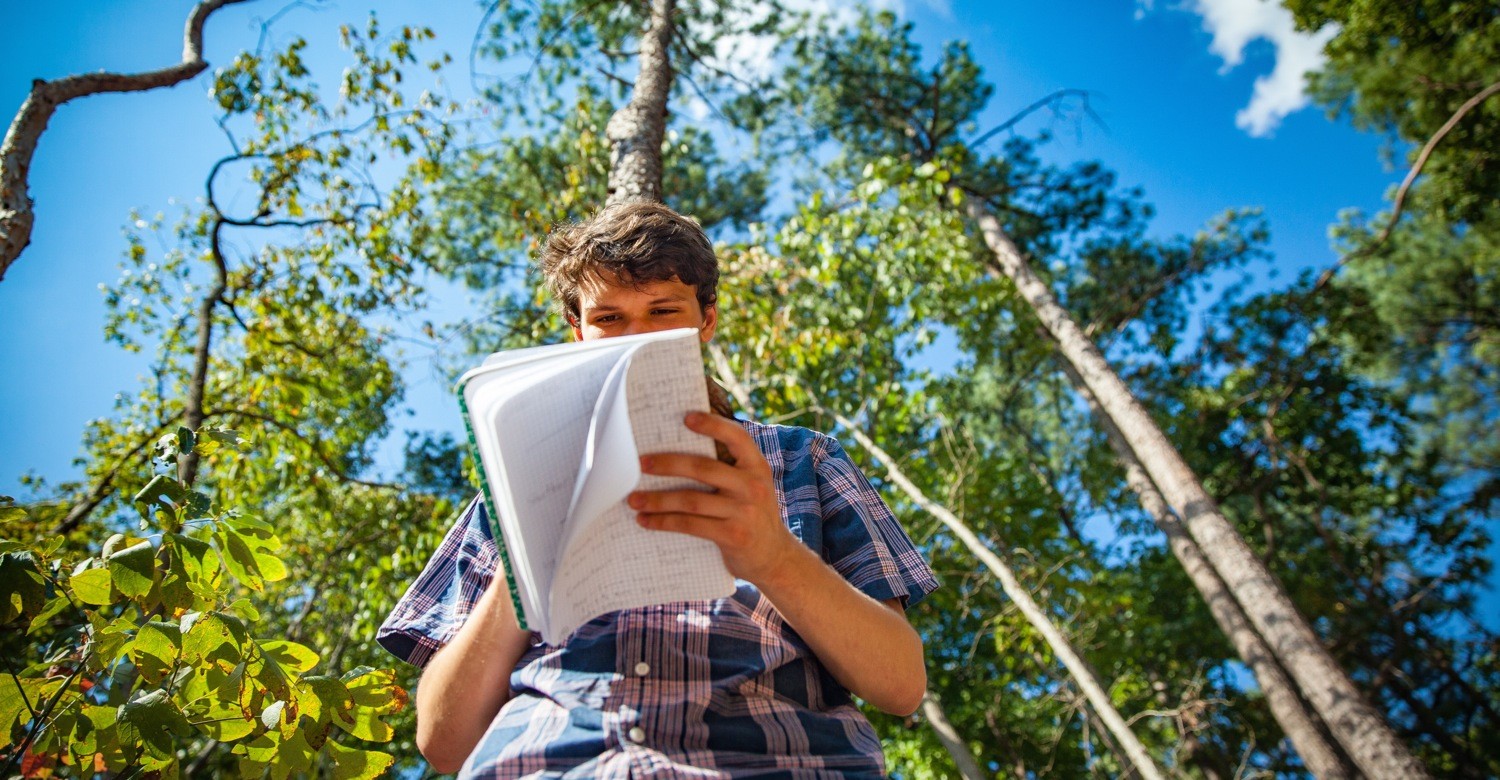 Seeing the Forest for the Trees

A new Domain initiative shows that a working forest can benefit students, the local economy, and the planet.

T ake a walk in the woods with Forestry Professor Ken Smith’s students and you’re likely to hear more Latin spoken than you’ve heard since the last time you attended a convocation in All Saints’ Chapel. During one such recent outing, students in Smith’s Introduction to Forestry class were busy quizzing themselves and one another on the Domain’s arboreal species.

“I think that’s a sourwood,” said one, pulling a branch down toward her face for a better look at its leaves. “Oxydendrum arboreum?”

Smith’s students made their way down a fire lane through vertical stands of trees reaching toward the heavens to arrive at a visual anomaly—a clearcut acre, where individuals of those same species have been reduced to stumps and debris.

“Listen up, listen up, listen up,” Smith, standing atop a wide stump, shouted to quiet the ongoing chatter of common and Latin tree names. “This is part of the Demonstration Forest. We made six one- to one-and-a-half-acre openings in May and June. Before that happened, we had students out here inventorying all the vegetation so we know what was out here. After the cut, we randomly sampled the stumps to get an accurate depiction of the tree ages, so that’s how we know the bigger trees out here, like the one I’m standing on right here, which was a white oak, were between 80 and 100 years old.”

Why were these beginning forestry students studying one of the few unforested acres on Sewanee’s 13,000-acre Domain? Because, say Smith and Domain Manager Nate Wilson, some of these students will join the next generation of American forest managers. And a healthy forest is not always an untouched forest.

Sewanee’s Demonstration Forest is a relatively new concept—a portion of the Domain where activities that disturb the forest floor can take place, where students and faculty can engage in research projects and active forest management. Those activities include biological experiments and archaeological digs. They also include timber harvests, prescribed fires, and wildlife habitat manipulations.

But active land use on the Domain is a very old concept, belying the notion that Sewanee’s landholdings are anything close to untouched. Native Americans lived here for thousands of years. “They were collecting firewood, they were doing small-scale agriculture, they were using fire,” says Smith. And in the early years of the University’s history, the Domain’s forests were severely depleted by timber harvests, with George Fairbanks, Sewanee’s first commissioner of buildings and lands, observing that “ignorant or willful wielders of the axe, disregarding all instructions or contracts … marred and destroyed large portions of the original forest growth.”

Wilson believes that the University has an obligation to educate students who can go out into the world to engage actively in conversations about society’s use of natural resources. That means avoiding large-scale harvests like those that took place in the early 20th century, but also that there are lessons to be learned from seeing directly how our lives are intertwined with and dependent on the land. “Having a visceral connection to active land management, whether it’s on a farm or in a forest, is critical to creating citizens who can take part in civic life and public debate going forward,” he says.

In 2012, the University’s Natural Resources Advisory Committee—made up of students, faculty, and staff—laid out a vision for the future of the Domain along with a number of goals. Those goals included managing habitats to promote biodiversity, fostering ecological communities that can be resilient in a changing climate, integrating management into the curriculum, supporting recreational use of the Domain, and demonstrating a sustainable flow of natural resources. A year later, a management plan followed, and that plan is currently being updated with forest-management activities planned for the Domain through 2020.

Those activities are meant to demonstrate responsible land management practices not only for Sewanee’s students, but for other landowners in the region. To that end, the director of the Forest Stewards Guild—a professional organization of natural-resource managers—was recently on campus to talk to University representatives about joining the guild’s Model Forest network, which promotes long-term conservation of working forests by showcasing those that are managed properly. If it’s certified, Sewanee’s Demonstration Forest would be the guild’s first Model Forest in Tennessee.

“We’re doing forest management with a quadruple bottom line,” says Wilson. “That is: ecology, economy, society, and education.” Ecologically, Wilson says, the Demonstration Forest will be managed to maintain biodiversity and climate resilience. Socially and economically, managers will ensure that products are harvested, processed, and used by local people so the local economy benefits. And educationally, Sewanee students will be involved in every step of the process.

When wood was harvested from the Domain in 2014 to produce floors at the new Sewanee Inn, students helped plan out the harvest and were on hand when the trees were cut. They also went to the local sawmill where the timber was processed, then to the wood-products company where it was dried in a kiln. “They got to meet the loggers and the people operating the sawmill,” says Wilson. “They got to see not only what it takes and why it’s important that we maintain these local economies, but what the resource implications are. We can take these examples from the forest and translate them to so many other aspects of people’s lives."

Forestry Professor Karen Kuers’s students conducted a class study on the land that was affected by the harvest for the Sewanee Inn flooring. Before the trees were cut, students counted every woody stem in the circular plots to create a pre-harvest inventory. The data from that study were entered into a computer model developed by the U.S. Forest Service to predict the composition of the forest into the future. They also wanted to find out how new trees would regenerate from the stumps of harvested oaks. “Most of our hardwood species regenerate as sprouts from stumps on the ground,” says Kuers. “Oaks that come back from a stump sprout are more likely to make it into a canopy. We know that larger oaks don’t sprout as well as smaller oaks. We’d like to know what is that transition point. How big of an oak will still produce a sprout in the Sewanee area?” Future students will return to those plots to help answer that important question.

The eclectic history of land use on the Domain helps inform how its forests are managed for the future. The clearcut acre west of the University’s equestrian center, where Smith’s students recently found themselves counting tree rings on stumps on a sunny fall day, was pastureland in the early 20th century. Cattle grazed there, not in open fields, but in “dirty fields,” where trees that were too large to remove had been left to stand. In time, the pastures were abandoned slowly as fewer cattle grazed on grass as well as on the tops of growing trees that were beginning to reclaim the pastures into forest.

The forest that includes the harvested acres is as diverse as the land’s history. There are those same big old trees that the cows once grazed under. There are the trees that the cows once munched on, some of which grew while others were stunted or knocked over by grazing cattle. And then there are the younger trees that grew up after the fields were abandoned completely. The trees in these three age classes, with their widely different economic values, grow in close proximity to one another, making it impractical for loggers to remove only the high-value trees. So, Wilson had an idea: A series of small clearcuts would allow loggers to remove trees of all three age classes while maintaining the integrity of the forest. “This helps us reset the trajectory of the forest so that what comes back is all of an age class that we can manage over time,” says Wilson.

Students laid out the six openings (totaling nine and a half acres) so that they were long and narrow, following the contours of slopes on the forest floor. By doing this, they emulated nature’s own clearcutters: tornados. Students also worked on environmental compliance issues, met with the loggers to make plans for removing the trees, and planted native grasses on the plots after the harvest. And now, even more students are learning from the Demonstration Forest. At least four professors are taking classes to the sites this semester to provide a close-up example of how forest management can be done.

This winter, students will replant two of the openings with shortleaf pine trees, a native species once much more common on the Domain than it is now. Prescribed fire will also be introduced to a portion of the area this winter. Over the next 30 years, the idea is to slowly remove most of the older, less productive forest and gradually replace it with natural hardwood regeneration and shortleaf plantings, all the while using limited prescribed fires to promote plant diversity on the ground. The goal is that, in 50 years, the area will be a productive mixed forest of pine and hardwood that supports both vigorous timber growth and a diverse plant understory and wildlife population.

“The most important principle in forestry is the future,” says Karen Kuers. “We shouldn’t do anything to any forest until we have first looked at what will come back and make sure that we have created conditions that will be most favorable for regenerating a forest that’s as good or even better than what we cut down.”