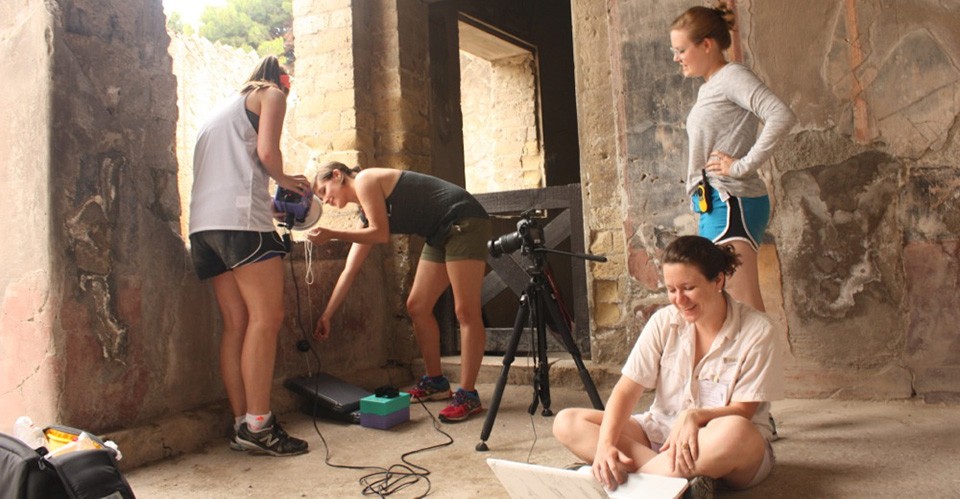 A Sewanee professor and her students are preserving first-century graffiti with 21st-century tools.

"T he dark cloud looked like a pine tree,” wrote Pliny the Younger in letters to his relatives about 1,940 years ago. He was writing about what is perhaps the most famous volcanic eruption in history: the Aug. 24 eruption of Mt. Vesuvius in the year 79 A.D.

In some respects, that cloud and its aftermath are the compelling force behind the scholarship of Visiting Assistant Professor Jacqueline DiBiasie, her students, and colleagues working on the Herculaneum Graffiti Project, a multiyear project to digitize ephemeral cultural resources in the form of graffiti scratched in the plaster walls of Herculaneum. The pine tree cloud was volcanic ash, pumice, and gases being thrown aloft to the edge of the stratosphere, where wind shear slowed solid materials enough to make them fall back to earth. Pliny’s eyewitness account guaranteed that the term “Plinian eruption” is what geologists today still use for similar violent volcanic activity. The pyroclastic flows of superheated gas and ash that never made it to the clouds overran nearby towns so fast that people were trapped, most famously in Pompeii, but also in nearby Herculaneum. Herculaneum was buried in 50 feet or more of material, turning it into a time capsule of Roman life in the first century.

First uncovered about 1,600 years after the eruption, the towns of Herculaneum and Pompeii have been objects of curiosity and plunder for the past 300 or more years. While they are still the objects of intense study by archaeologists, much of that work has turned to preservation, and DiBiasie and her colleagues are at the leading edge. Part of a team that is deploying state-of-the-art digital tools to catalog graffiti in Pompeii and Herculaneum, DiBiasie is the field director for the Herculaneum Graffiti Project. For the past two summers she has led an interdisciplinary team from Sewanee, Millsaps, Washington & Lee, and the University of Richmond to photograph, record, and digitize ancient graffiti from the site, while working with students to hone their skills in archaeological documentation, digital preservation, and Latin translation.

The research group, called the Ancient Graffiti Project and led by Project Director Rebecca Benefiel of Washington & Lee University, is also digitally cataloging graffiti in a new tool they have created. The results are collected in a web-based search engine, which scholars can use to gain insight into first-century Roman life. The records are now in the digital cloud.

“This work is crucial. Ancient graffiti are disappearing at an alarming rate,” DiBiasie says. “In fact, a few graffiti we documented in our first field season in 2014 have already partially disintegrated.” The Herculaneum Graffiti Project is working to ensure that these graffiti can be preserved before they are lost forever, and the group is working with conservators at the site in order to preserve it for future generations.

So what are these graffiti? First, forget the notion of New York subways or big public scrawlings that are in part transgressive, as well as artistic and performative. The Herculaneum graffiti that the DiBiasie team is studying are quite small, often fitting into a two-inch square. They are scratched into plaster walls with sharp objects. “There was not a social taboo against graffiti like there is now,” says DiBiasie. “People wrote graffiti everywhere: in their own houses and in public places. There was only one place—tombs—where graffiti writing was sometimes unwelcome.” Another difference between ancient and modern is that the graffiti were quite small, but they were ubiquitous. There is one graffito alluding to this fact, which can be translated, “I wonder, wall, that you who are holding up so many scribblings, have not fallen into ruins.” [Admiror, O paries, te non cecidisse ruinis: qui tot scriptorum taedia sustineas.]

A quick tour of the Ancient Graffiti Project search engine shows that the content is wide-ranging. Here’s an example: “He who does not know to protect himself does not know how to live. The least evil becomes the greatest by thinking lightly of it.” [Qui se tutari nescit nescit vivere. Minimum malum fit contemnendo maximum]

“That’s not the most uplifting graffito, but an aphorism that still resonates today ” she says. “My favorite is inscribed by two gentlemen, Fortunatus and Ianuarius, who are in love with their ladies, Amplianda and Veneria: ‘Fortunatus loves Amplianda. Ianuarius loves Veneria. We ask mistress Venus that you may keep us in mind because we merely ask you.’” [Fortunatus amat Ampliandam. Ianuarius amat Veneriam. Rogamus damna (:domina) Venus ut nos in mentem habias (:habeas) quod te modo introrgamus (:interrogamus).]

“To me, this message shows the common thread in humanity and the trials of love, even 2,000 years ago,” DiBiasie says. “All the colons in the transcription indicate a mistake in the Latin, showing the colloquial nature of the language and hopefully encouraging my Latin students. They can see that even native speakers made mistakes! The names Fortunatus and Ianuarius are names that are often of slaves. Many people may think that Roman slaves were illiterate and this is not always the case. This graffito gives us a glimpse into the lives of these people whose voices are otherwise silent from the literary record.”

The graffiti cataloged by the project reflects some common and universal themes. Among the drawings the team has discovered or documented, there are many drawings of boats and hunting, but there are also graffiti that seem remarkably contemporary: drawings of gladiators, the sports heroes of the day—sometimes with just a characteristic helmet, a visual synecdoche for the full man. And then there is the “stand your ground” nature of the graffito about self-protection, a common theme in contemporary American life.

Then there is bathroom humor, written in a latrine: “Apollinaris, the doctor of the emperor Titus, defecated here well.” [Apollinaris medicus Titi imperatoris hic cacavit bene]

“This one shows that not much has changed in the last 2,000 years,” DiBiasie says.

The Ancient Graffiti Project is a prime example of a new area of scholarship called Digital Humanities, where software aids scholars with tasks that were previously completed through other means and often makes new understanding of old subjects possible.

“This project was amazing,” says Sara Minnear, C’16, who was part of the team this summer, along with fellow students Grace Gibson, C’17, and Katherine Handloser, C’19. “The faculty were great, and they gave us access to cutting-edge tools.” In fact, the Herculaneum Graffiti Project was the first research group to use Reflective Transformation Imaging (RTI) in Herculaneum.

RTI was just one tool used by the team. It involves taking a series of photographs from a fixed point but with light shining on the object from different directions. The series of images are combined into a composite file on the computer so the user can find the angle that shows the graffito best. Raking light, or light from an oblique angle, was also a technique students used to find graffiti. Looking at a section of plaster wall where previous researchers had cataloged graffiti that the team wanted to digitize, they would shine flashlights at various angles to kick up shadows of inscriptions.

The researchers worked on site every morning during their stay in Herculaneum. Then, after lunch, they cataloged and processed the work they had done in the morning. The project involved using a combination of traditional recording techniques on paper as well as new technologies, such as computational photography and photogrammetry. One technology involved using an image on an iPad to trace over graffiti on the touchscreen to give a clear representation of a graffito that might be difficult to make out.

“We are just really interested in the full range of ways we can interact with this site,” says DiBiasie. “So when we find out about a new technique, we want to try it out. We’re hoping to present a conference paper on the iPad portion of the project later this year.”

Those digital tools are coming just in time. Much of the site at Herculaneum is open to rain and sun, and both Herculaneum and Pompeii are heavily visited. While the sites are working to prevent modern graffiti, which are also ubiquitous there, researchers are having to work hard to hold on to a past that had previously been preserved by a Plinian tragedy.

Sunlight, rain, the fingers and hands of tourists all take their toll, but the digital project being completed by DiBiasie, her colleagues, and her students will keep this resource safe for scholars for many years to come.