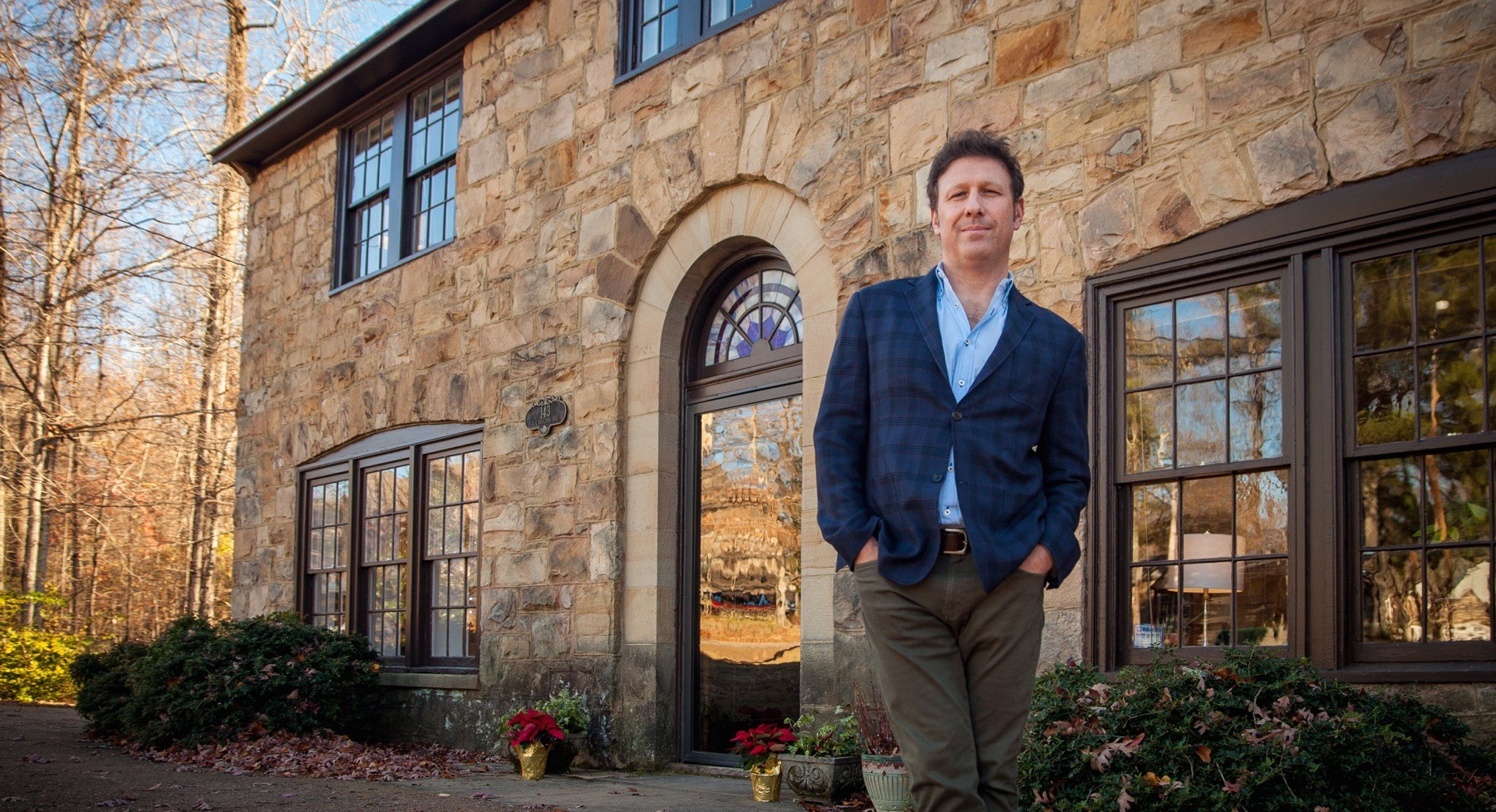 Adam Ross in front of the Watson House, the new home of the Sewanee Review.

With new writers and a new look, Editor Adam Ross’s debut issue hopes to find a place on your bedside table.

T he Sewanee Review played midwife to Flannery O’Connor’s second short story. It has been exalted by the likes of T.S. Eliot and continuously published longer than any other U.S. literary quarterly.

But when the next issue of the Review is published in February (online in late January), you probably won’t recognize it.

That issue will mark the debut of Adam Ross, the first new editor of the Sewanee Review since the Watergate era and the first to use a computer instead of a typewriter. Vice-Chancellor John McCardell appointed the Manhattanite turned Nashvillian following a national search.

Ross promises both a facelift and a diverse, contemporary body of writers. He aims to make the Review “regular bedside reading for people in the Sewanee family” and to propel it into the national conversation about American letters.

“More people—more readers—need to know about the Sewanee Review, and by that I don’t just mean its glorious history,” Ross told University regents shortly after his hiring in early 2016. “Retiring Editor George Core, addressing the Review’s long life, stated it best: ‘Longevity alone does not guarantee a virtue.’”

Ross, 49, is a relative newcomer to the literary big leagues. He has two books under his belt: a novel (Mr. Peanut) and a short-story collection (Ladies and Gentlemen), both published to critical acclaim since 2010. His previous primary editing experience was at the weekly Nashville Scene, where he started out answering phones and wound up shepherding special projects. Along the way, he wrote about everything from community gardens to sex merchants.

Ross is also a newcomer to Sewanee, though no stranger to academia. He studied at Vassar College (B.A. in English), Hollins University and Washington University (master’s degrees in creative writing). In the school of life, he’s been a child actor, high school wrestler, teacher, bartender, and assistant to a B-movie producer, among other things.

His fans include Alice McDermott, a National Book Award-winning novelist and Sewanee Writers’ Conference faculty member. “It’s an exciting prospect, this making the Sewanee Review ‘new’ again—it’s also risky, even daunting,” says McDermott, who served on the University’s search committee. “But that’s as it should be. The pursuit of poetry, fiction, of any of the arts, is exciting and risky and daunting as well.”

Provost John Swallow, who led the search, predicts that Ross “will make us ever prouder of Sewanee’s literary heritage and commitments, as we see them ever more fully in the future.”

Ross’s faintly feverish voice and eager aquamarine eyes suggest relish for the challenge. He says his first issue will flow from “Sewanee power,” by which he means graduates, Writers’ Conference participants, and the like.

One big-name alumnus in the debut is Pulitzer Prize-winning presidential biographer Jon Meacham, C’91, with coupled essays (“Trump’s Literacy” and “Hillary and the Grand Inquisitor”). Another is acclaimed writer John Jeremiah Sullivan, C’97, who teases out the life of a pioneering African-American journalist.

But just as dear to the new editor’s heart are two fiction writers you’ve never heard of. The quarterly’s bio for each reads, “This is his first published story.”

And women, famous and otherwise, are far more visible than in past tables of contents. They range from stars such as North Carolina novelist Jill McCorkle to up-and-comers like Nashville poet Tiana Clark.

The new Review, Ross says, “embraces what I see as this greater democratization of voices in America.”

Ross has hired several recent Sewanee grads to help edit the journal, including Managing Editor Robert Walker, C’15. They’re also charged with making it “part of the student imagination”—for example, by creating a display of modern literature they recommend at duPont Library.

This team has left Gailor Hall for new offices on in the stately Watson House on South Carolina Avenue, just past the Sewanee Union Theatre. There, Ross reveals that the Review’s pale blue, art-free cover is history, part of the first major redesign since 1944. Each future cover will have a unique look.

Says the editor: “Literature, in both theory and practice, remains a religion here in Sewanee.”