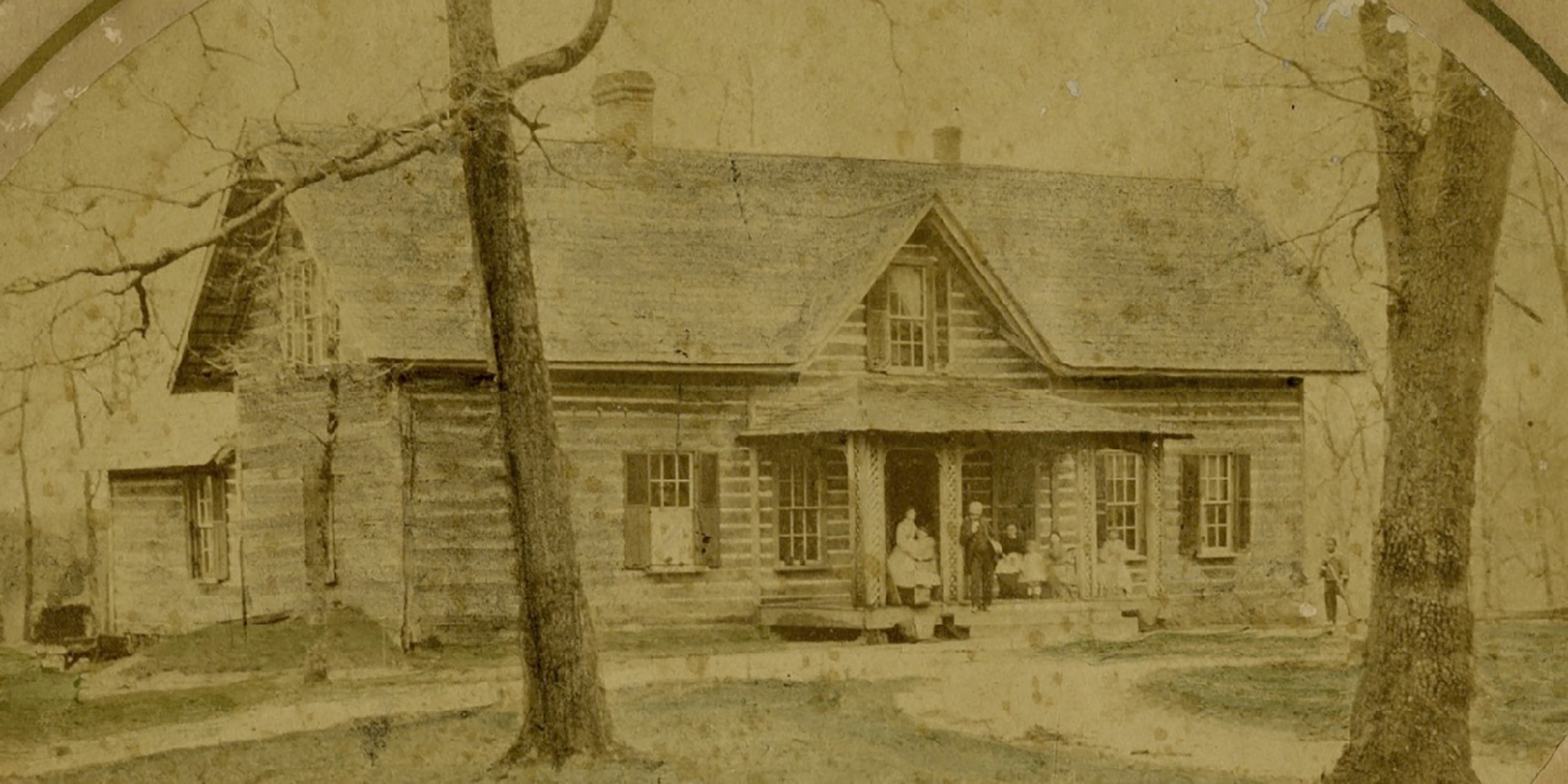 IF THESE WALLS COULD TALK

After years of study by Sewanee faculty, students, and alumni, the logs of Rebel’s Rest are giving up their secrets.

BY SCOTT TORREANO, PROFESSOR OF FORESTRY

It’s been five years since Rebel’s Rest caught fire during a renovation project in the summer of 2014, and almost as long since the remains of the historic building were painstakingly dismantled to be preserved and studied. In that time, an interdisciplinary team of Sewanee faculty, students, and alumni has been documenting the archaeological and architectural history of the building. Now, the first scholarly work resulting from the project has been published, marking the first time in more than 150 years that the building’s construction materials have been able to tell their tales.

Rebel’s Rest was a two-story, Reconstruction-era building that accommodated University guests between 1968 and 2014. This unique and beloved building was constructed of squared timbers and round logs and included additions that were built after its historically reported original construction date of 1866. Built to serve as a private residence for Major George Fairbanks and his family, Rebel’s Rest played a significant role as an anchor in the refounding of the University.

Following the Civil War, the University’s Board of Regents had just two years to meet the deadline imposed by the Sewanee Mining Company—that the University begin educational operations by 1868 or forfeit the land given to establish the University. Bishop Charles Quintard and Fairbanks raced to construct their homes as a tangible expression of their faith in the University’s future. Across the road, Otey Hall would become the first academic building.

The house was the setting of many significant events, including the first post-war meeting of the Board of Regents in October 1866 and the subsequent discovery of the University’s original deeds and title documents, presumed destroyed during the war. Early in its existence, Rebel’s Rest was the site of the first post office, the first supply store, briefly the Sigma Alpha Epsilon fraternity, and the birthplace of the EQB club in 1870.

An ardent and generous supporter of the University, Fairbanks was also a prominent Florida politician, agriculturalist, and historian. The Fairbanks family lived in Rebel’s Rest from 1866 to 1880, thereafter using it as a summer residence. Descendants lived in the home until it was transferred to the University in 1963.

The research team was especially keen to answer questions related to the true building dates of Rebel’s Rest, whether it contained any materials from previous structures, and who was involved in its construction. Further, we knew the salvaged logs would likely provide invaluable information about the past forests in and near Sewanee.

Tree rings can serve as proxies of climate and related environmental conditions where historical records are lacking. We use the term “proxies” for these and other natural archives, which can include stalactites and stalagmites, geological sediments, ice cores, and even volcanic ash. While many of these proxies are restricted to specific places or regions on the landscape, trees have some advantages as much of the earth has been or is covered by forests. Tree rings form in response to a complex interaction of growing conditions. Periods of drought and seasonal rainfall are recorded as changes in yearly ring growth. More abrupt and prolonged change, such as changes to the forest canopy or structure, can also be interpreted through the recruitment of new vegetation, species shade, and drought tolerance. Change can come as the result of hurricanes, ice storms, forest fire, or variation in climate.

As soon as the remains of the damaged Rebel’s Rest walls came down, we started learning about the building itself. The logs also revealed details about the structure and growing conditions within the local forests. This type of work is labor-intensive and takes years to complete. Team members included me, Patrick Vestal, C’12, Logan Stockton, C’17, and Maegen Rochner from the Department of Geography and Geosciences at the University of Louisville.

We learned that the forests around Sewanee have experienced serious droughts, some relatively prolonged, over the period from about 1650 to 1866. Other disturbances to forests, including ice storms, wind storms, and fire undoubtedly affected the trees. The droughts were especially dangerous in the 1670s and 1680s, and from 1772 to 1774. The severity of these droughts would have made life extraordinarily difficult for the people and wildlife of the region. Our modern reservoirs would soon be dry if Sewanee experienced droughts as acute as these droughts likely were. Just how serious they were is actually quantifiable. For example, the droughts of 2007 and 2016 paled in comparison to the droughts of the 1680s and 1770s.

Based on our data and other data from the region, a contemporary repeat of these 17th and 18th century droughts would likely result in major social and economic hardship in the region. Scientists can use this information to reconstruct climate and stream flows. These data can also assist in studies of climate change. For example, in Texas such data are being used in planning water use and supply budgets for major cities. Our next steps will focus on the possible causes and intensity of disturbance factors, like fire, in our regional forests. Knowing about the disturbance history of our forests helps guide better management of these complex systems.

Dendrochronology—dating events, artifacts, and environmental change by studying tree rings—is a highly specialized science, and the work is time-intensive. For Patrick Vestal, it is also a labor of love. As a student, he was a recipient of the Environmental Studies and Raoul Conservation Internships and had an opportunity to learn dendrochronology from some of the most respected experts in the field while working in the old-growth forest in nearby Savage Gulf. He has used the dated chronology of wood samples from Savage Gulf to date the timbers from Rebel’s Rest. Vestal was able to mentor Logan Stockton while Stockton completed an environmental research internship during his time as a student.

Another objective of the research team was to document the construction history of Rebel’s Rest. Religion Professor and Associate University Historiographer Gerald Smith (now retired) and his students combed through archives that provided information on where the trees were harvested and sawn. Student intern Rachel Rodgers, C’19, recovered the original invoices and other records documenting the number of logs delivered, material invoices, and even the daily hours and names of the construction laborers. Smith was able to document which sawmills were used to process the trees into squared timbers and logs. The mills were all within a few miles of Sewanee.

What becomes clear is that rather than being a remote wilderness outpost, Sewanee saw farmers, tradespeople, miners, and immigrants all contribute to a rapid reconstruction phase after the war. Forests in the region entered a phase of nearly unbridled exploitation and, sadly, that included the Domain. Our research on other Cumberland Plateau forests documents very similar, rapid change in the composition and disturbance history of the forests following the war.

The sheer diversity of species used in the construction of Rebel’s Rest and intensity of sampling represent one of the largest tree-ring chronologies from a single building in the United States. Our analyses confirmed the historically reported construction date of 1866. No recycled wood from other buildings was found. Along with photographs and written accounts, this confirms that very little of what had already been built in Sewanee was left standing following the war.

Currently, we are building collaborative efforts with other institutions to better document the dynamic structure and ecology of our local and regional forests. Researchers from the University of Missouri are studying the fire history of old-growth forests in Savage Gulf State Natural Area in an area where we have documented 300-plus years of forest change. The Forest Dynamics Lab at the University of Alabama will be working with us to document the effects of recent wind storms that disturbed the forests. Our goal is to involve Sewanee students in all of these efforts.