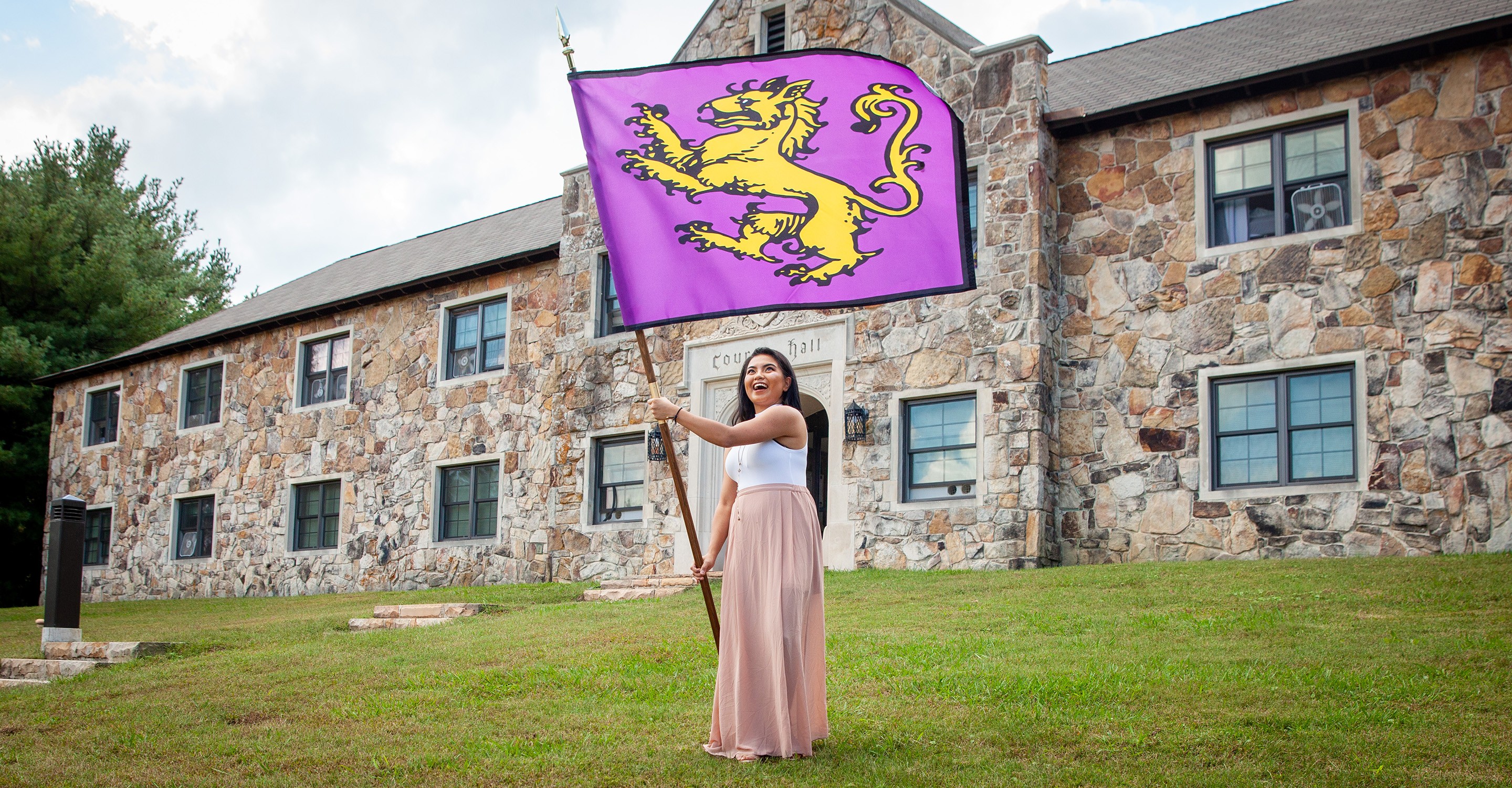 Gayle Manacsa is a sophomore from Murfreesboro, Tennesee.

Rallying ’Round the Flags

We asked residents of each of Sewanee’s 19 residence halls to show us the new flags Professor Emeritus Waring McCrady, C’59, designed to represent each hall. View the slideshow below to see the flags and learn the meanings of their designs. 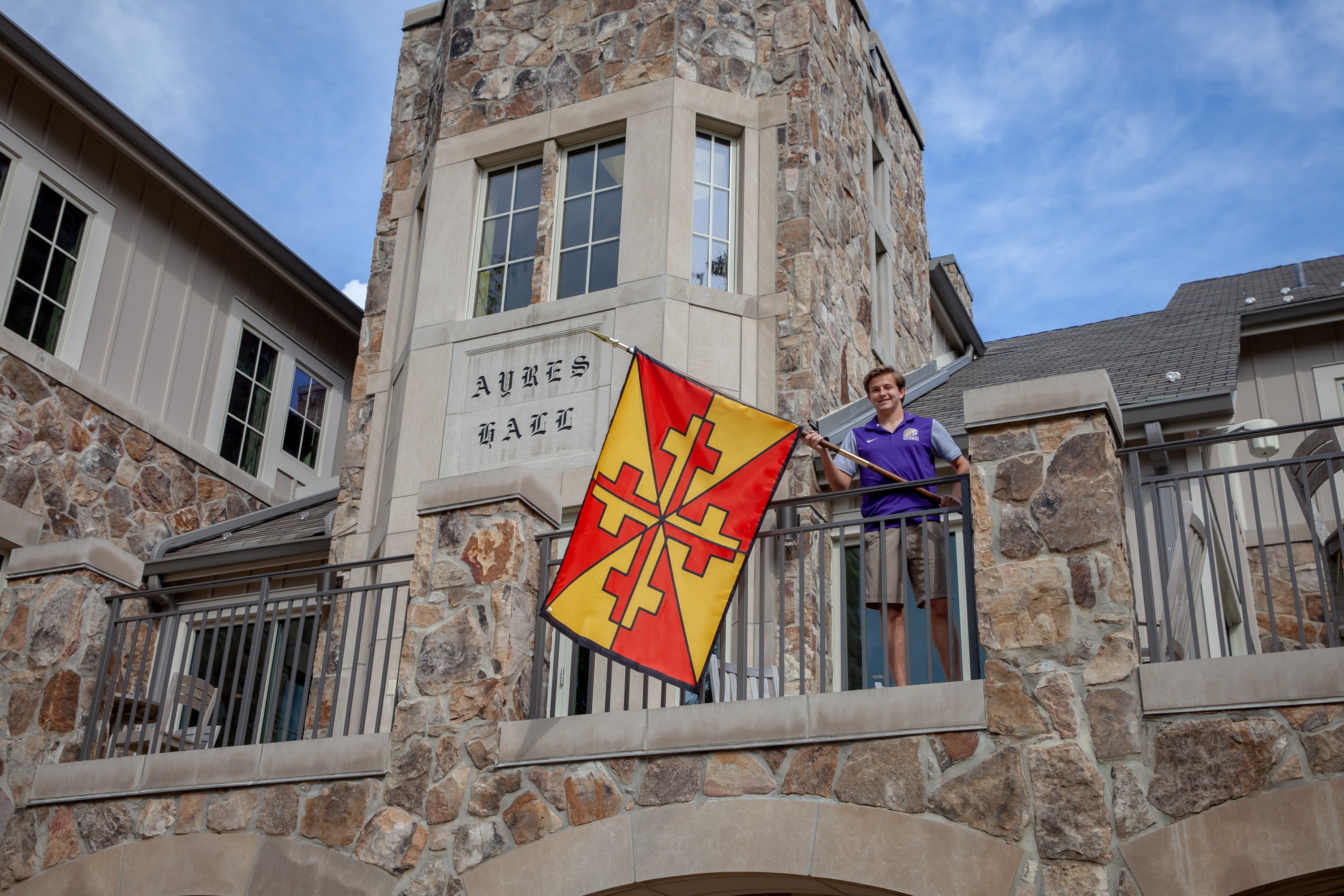 Alex Bulgarino is a freshman from Nashville, Tennessee.

Ayres Hall is named for Patricia Ayres and former Vice-Chancellor Bob Ayres, C’49, H’74. Bob Ayres’s red vice-chancellor’s robe is remembered in that color on the flag. The gold recalls financial responsibility. The cross blossoming out into smaller crosses is an outreach symbol from the Episcopal Church arms and flag, and the eight-part “gyronny” background likewise reaches out in all directions. 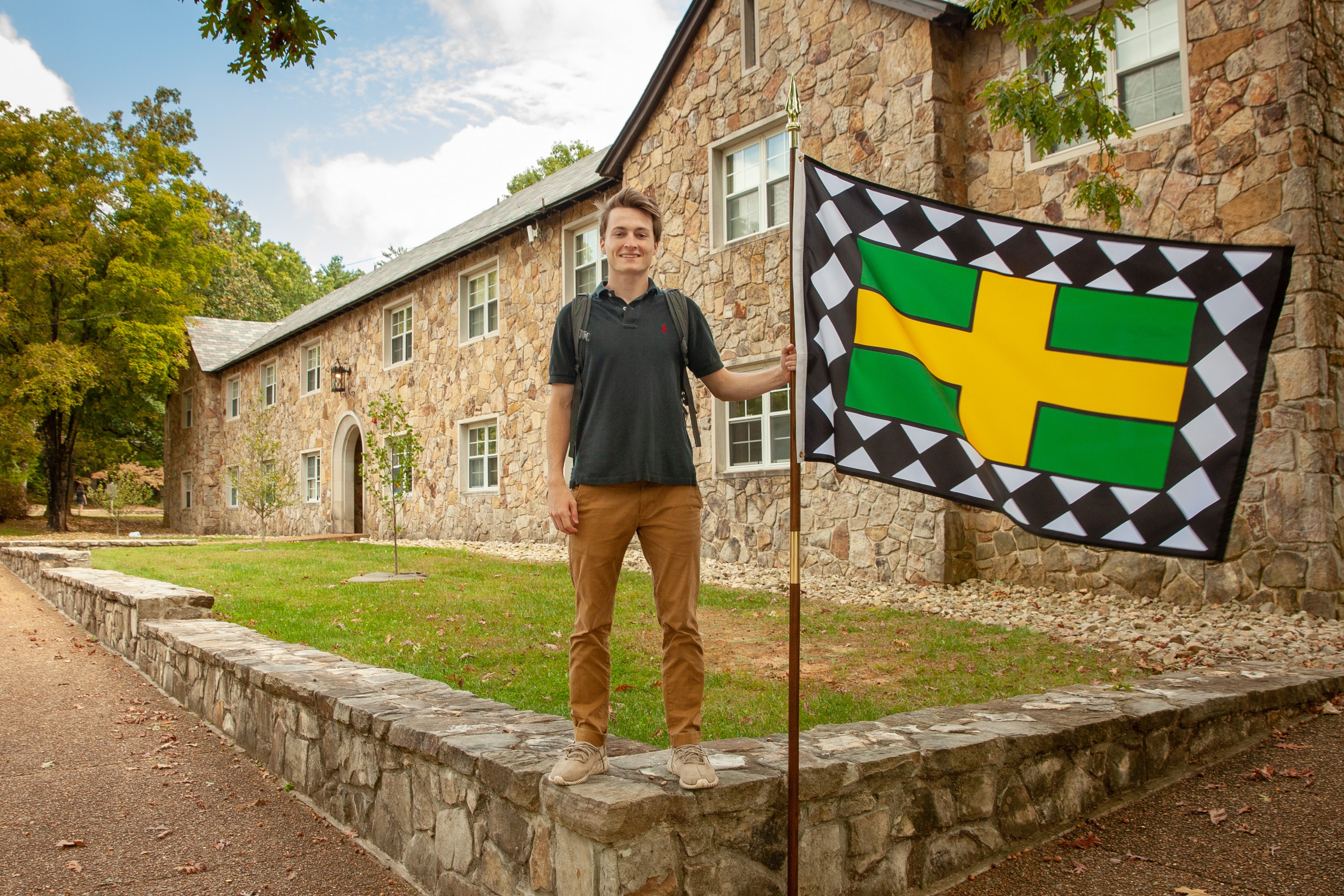 Evan Murray is a freshman from Augusta, Georgia.

C.K. Benedict was a priest and dean of the Theological School, hence the priestly color black and the central cross. This residence hall was the first in Sewanee to encircle a courtyard garden. Hence the surrounded green. It was also the first women’s residence hall, hence the alternating lozenges (heraldically symbolic of women) of the border, representing also the arrival of co-education. 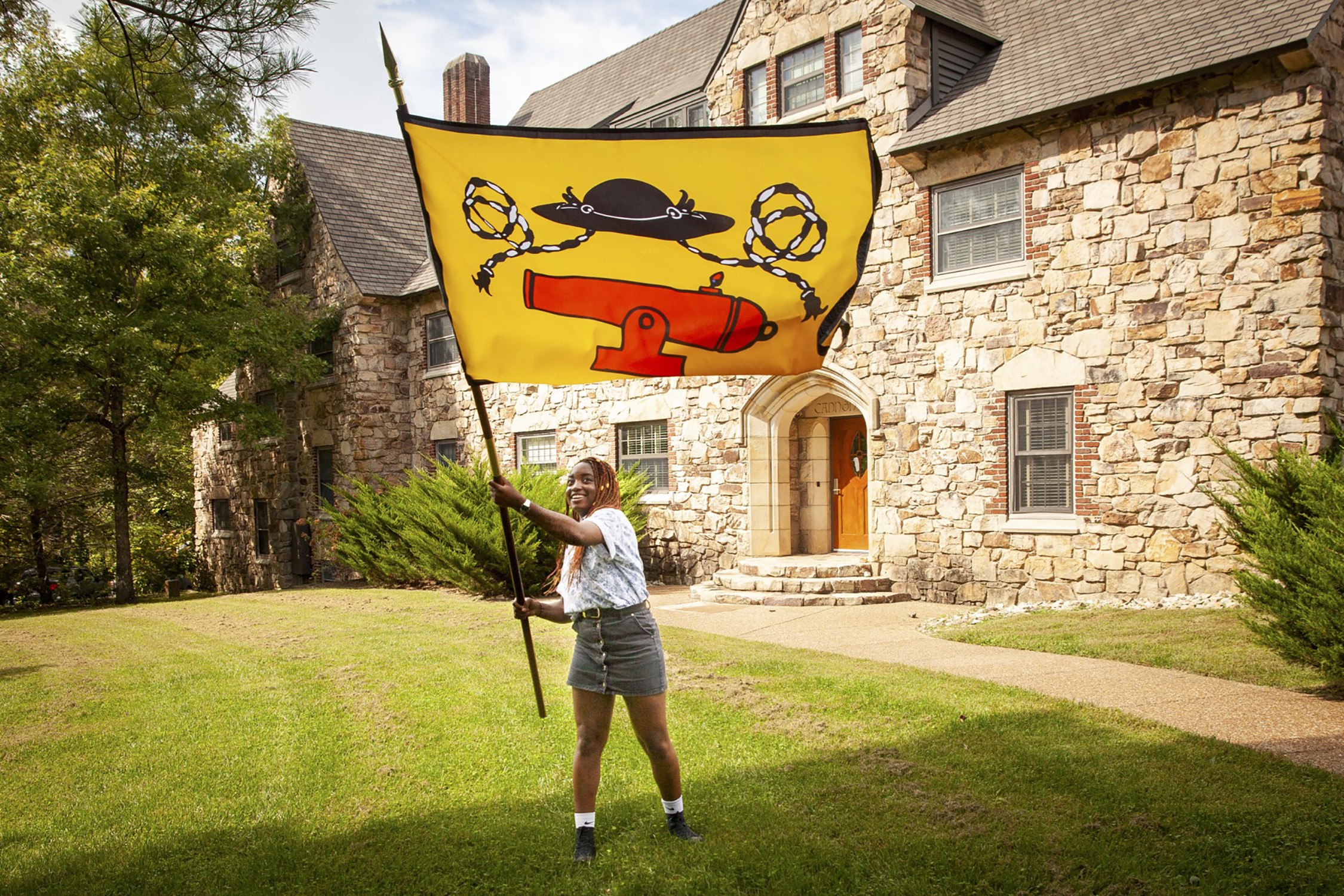 Adedolapo Prince is a freshman from London, England.

Father Cannon was a particularly beloved University Chaplain who died young, during his term in office. The symbol is an obvious pun, and the tasseled hat is the heraldic sign of a regular Anglican priest. 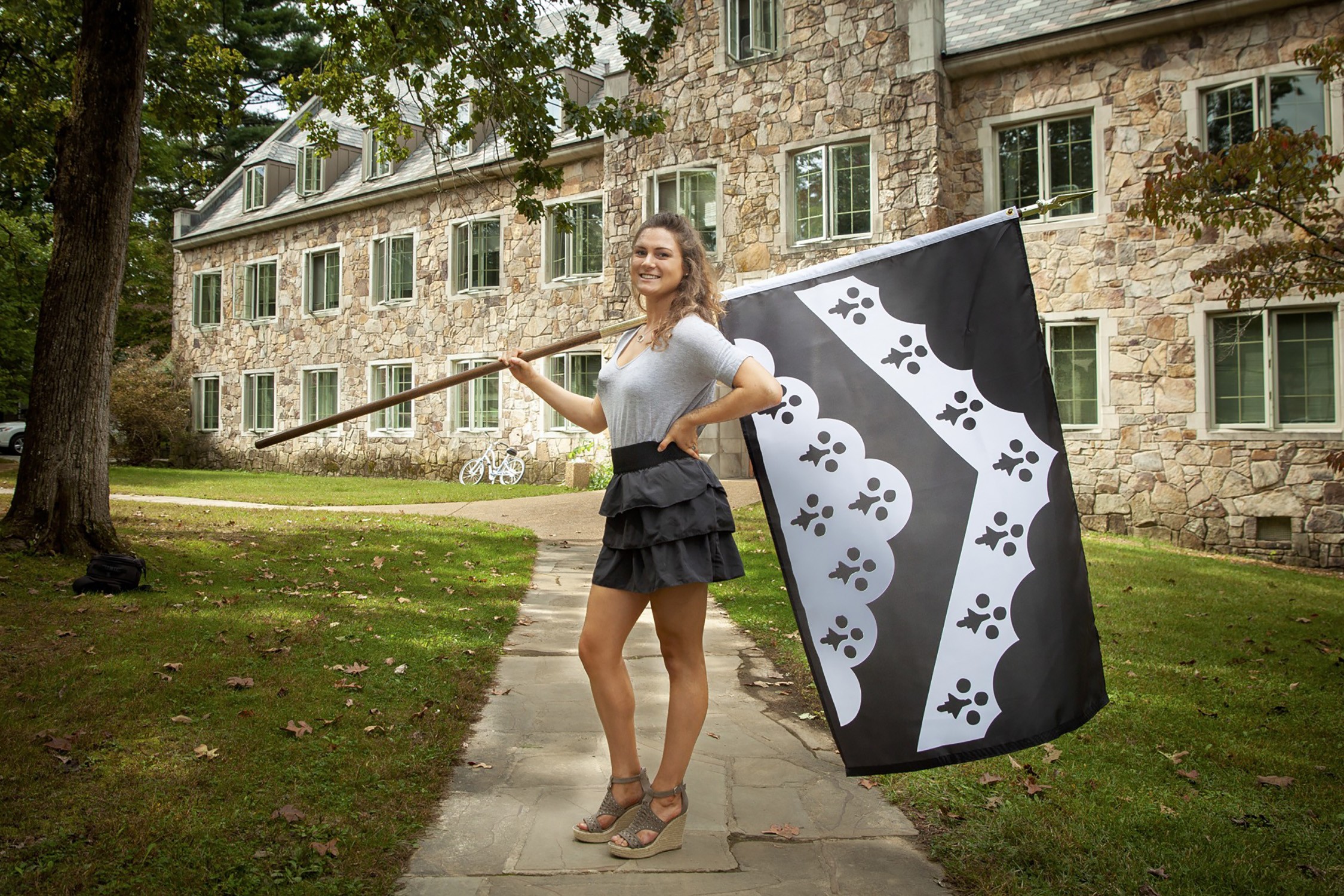 Annie Heller is a freshman from Addison, Texas.

This stylized design of symbolic ermine constitutes the simple arms of the donor family, ardently enthusiastic alumni. The arms are carved over the residence hall’s principal entrance. 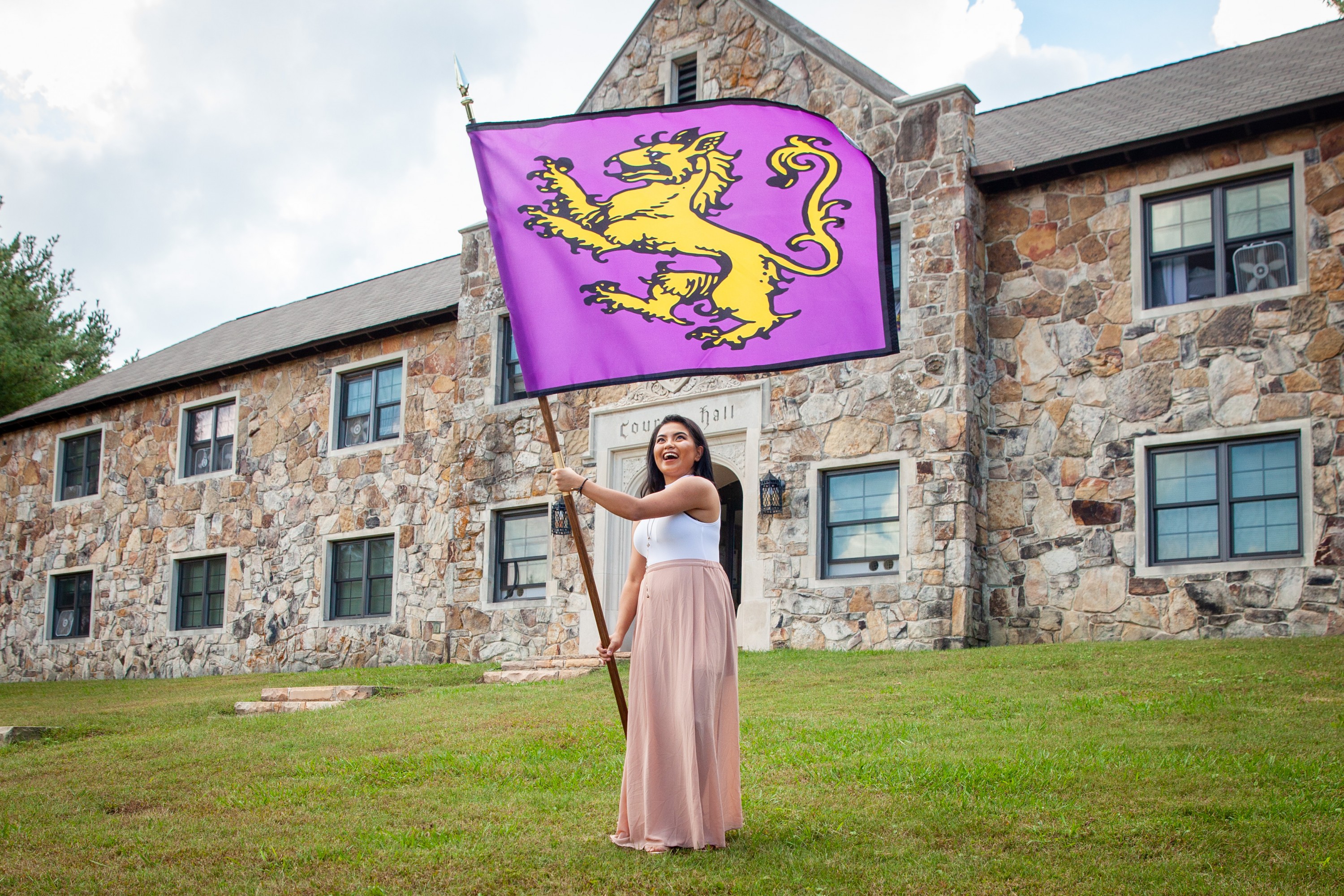 Gayle Manacsa is a sophomore from Murfreesboro, Tennesee.

The gold heraldic tiger (with wolf’s ears and a beaked nose) against a purple background constituted the University’s official coat of arms between 1957 and 1982, in which period this residence hall was built. The tiger mascot came to Sewanee in the 19th century, from Princeton. The colors are officially those of the University. These arms are already handsomely carved over the lake-front entrance of this residence hall. 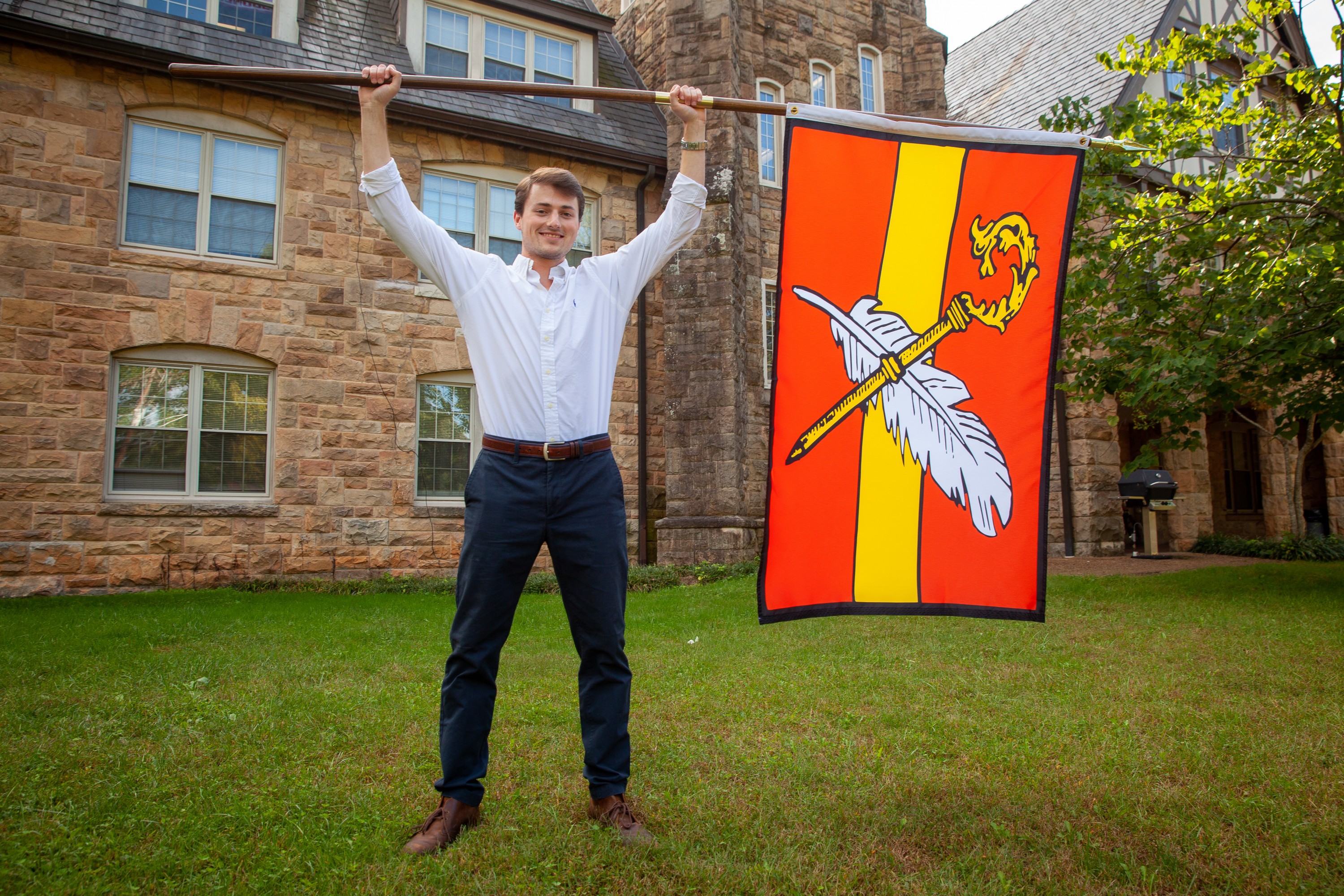 Chase Govett is a junior economics major from Dallas, Texas.

The red field and gold fesse (horizontal band) are the hereditary arms as used by Bishop Stephen Elliott, one of the founders of the University. To these have been added a pen for the scholarship of his family and a crozier for his personal office. 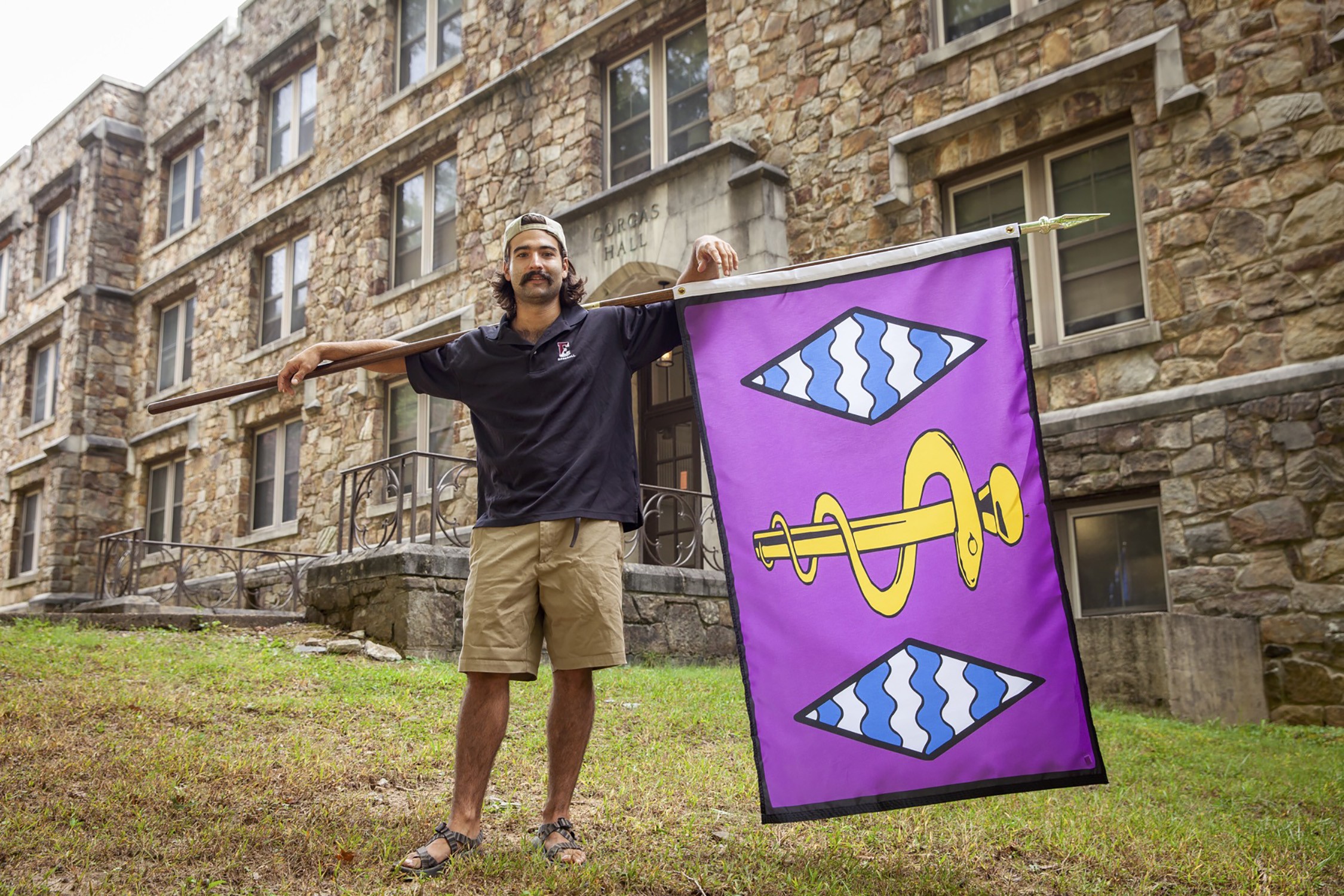 Hunter Craighill is a senior English major from Sewanee.

Sewanee alumnus (and first gownsman) William Crawford Gorgas was the doctor who made possible the connection of the Atlantic and Pacific oceans by solving the mosquito plagues of Panama. 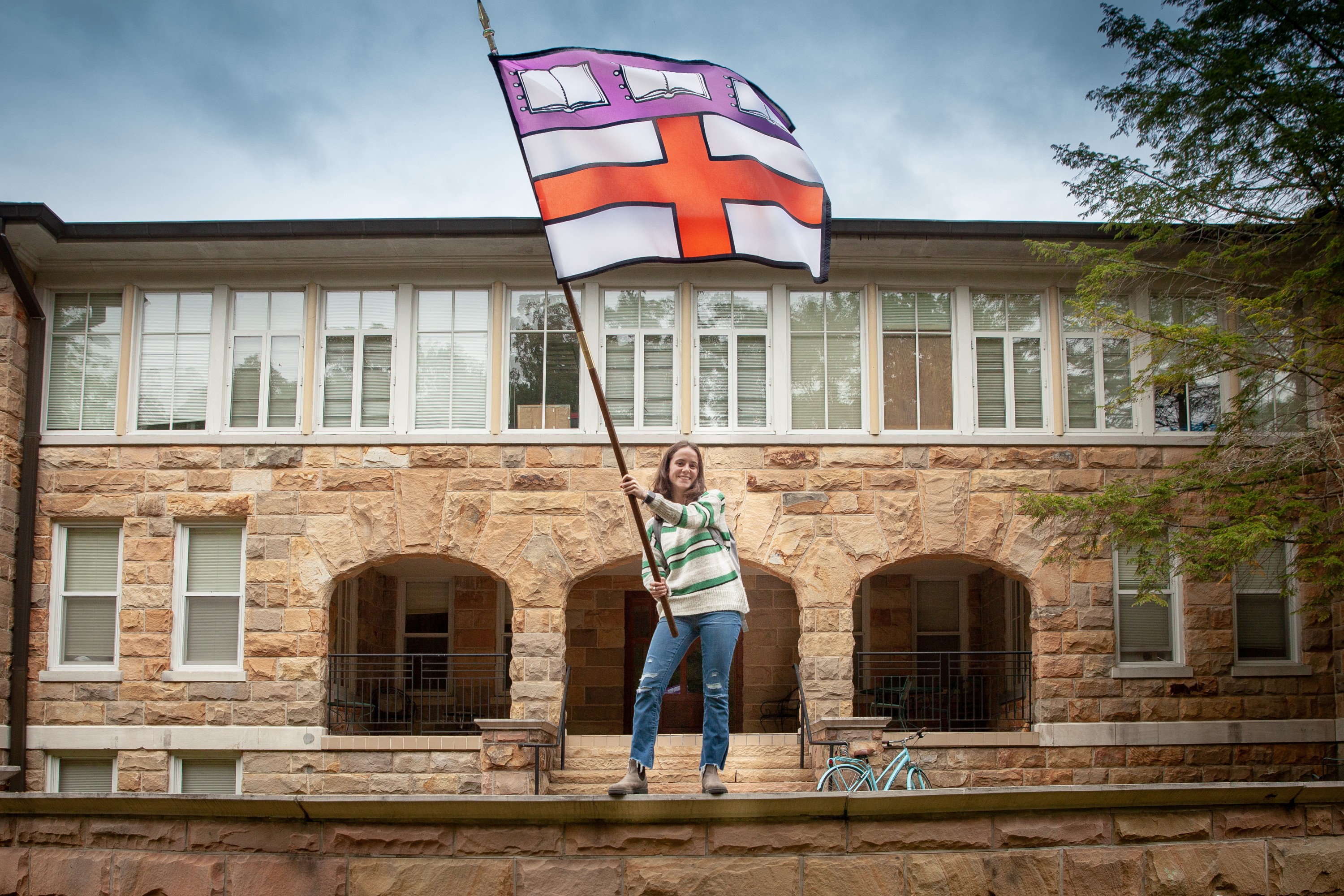 Lily Fox is a sophomore from Greenwich, Connecticut.

The Hodgson family first erected the building as a library, but for the better part of a century it functioned as the most advanced hospital between Chattanooga and Nashville. 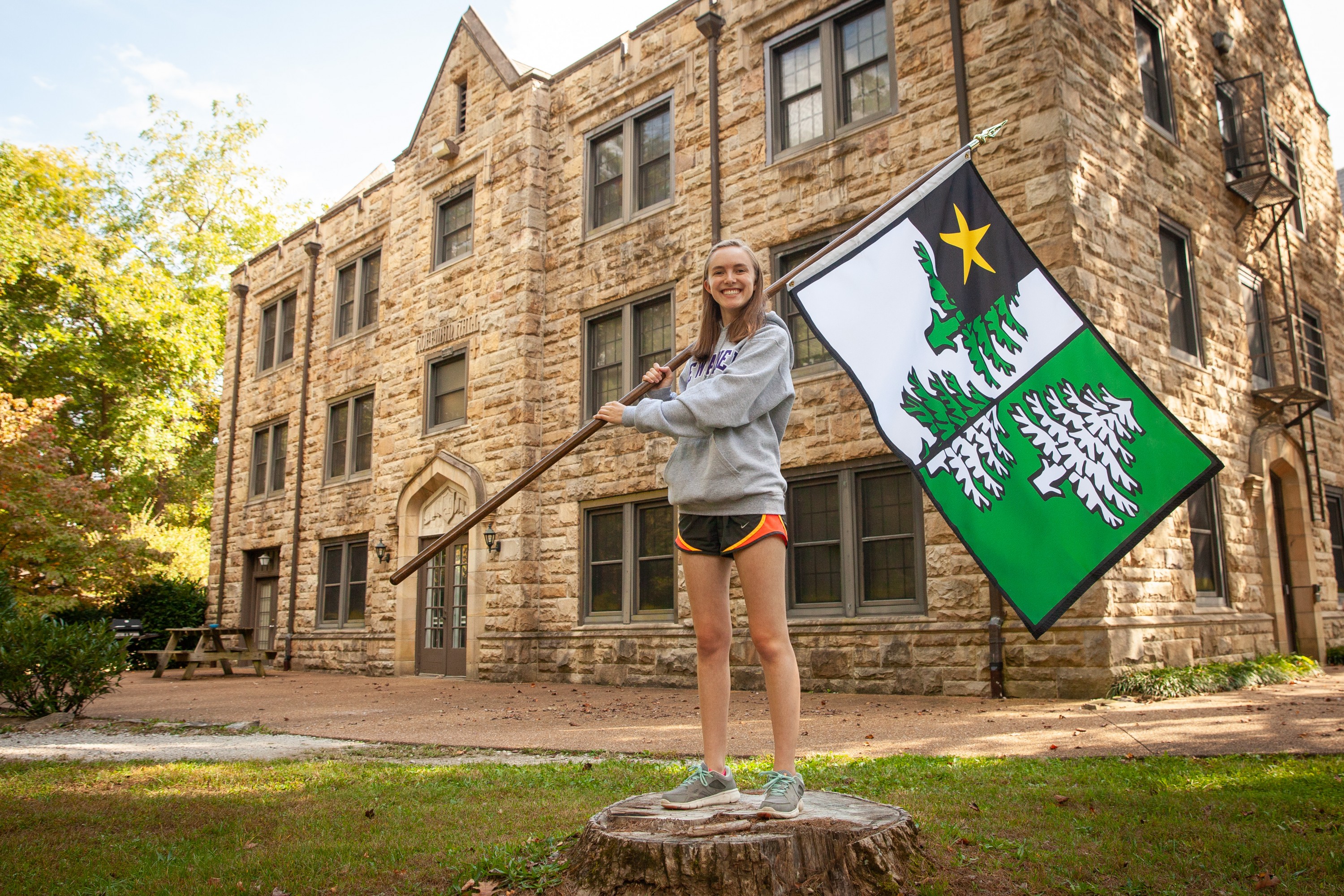 Catherine Bratton is a freshman from Norman, Oklahoma.

The colors and the three pine trees are the arms of the Hoffman family. The star is a “mark of cadency,” which in heraldry shows “third” in line, Hoffman’s original residence hall being the third surviving permanent residence hall at Sewanee. 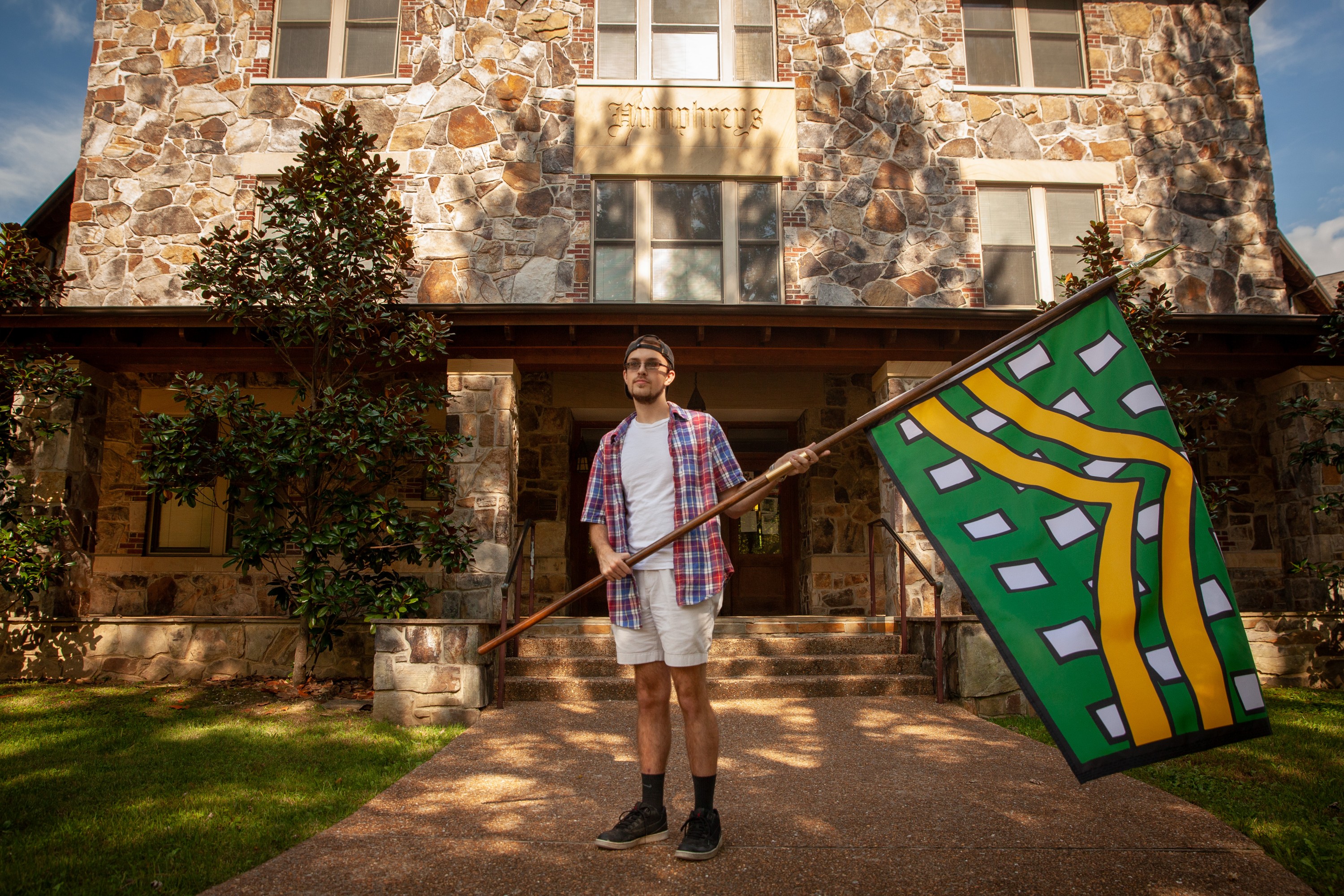 Daniel Molder is a senior mathematics and computer science major from Shelbyville, Tennessee.

The gold “embowed chevronels” symbolize the roofing industry, which made possible the family’s gift of the building. The field is symbolically a reference to the prominent University cemetery, which peacefully dominates the view from the residence hall. 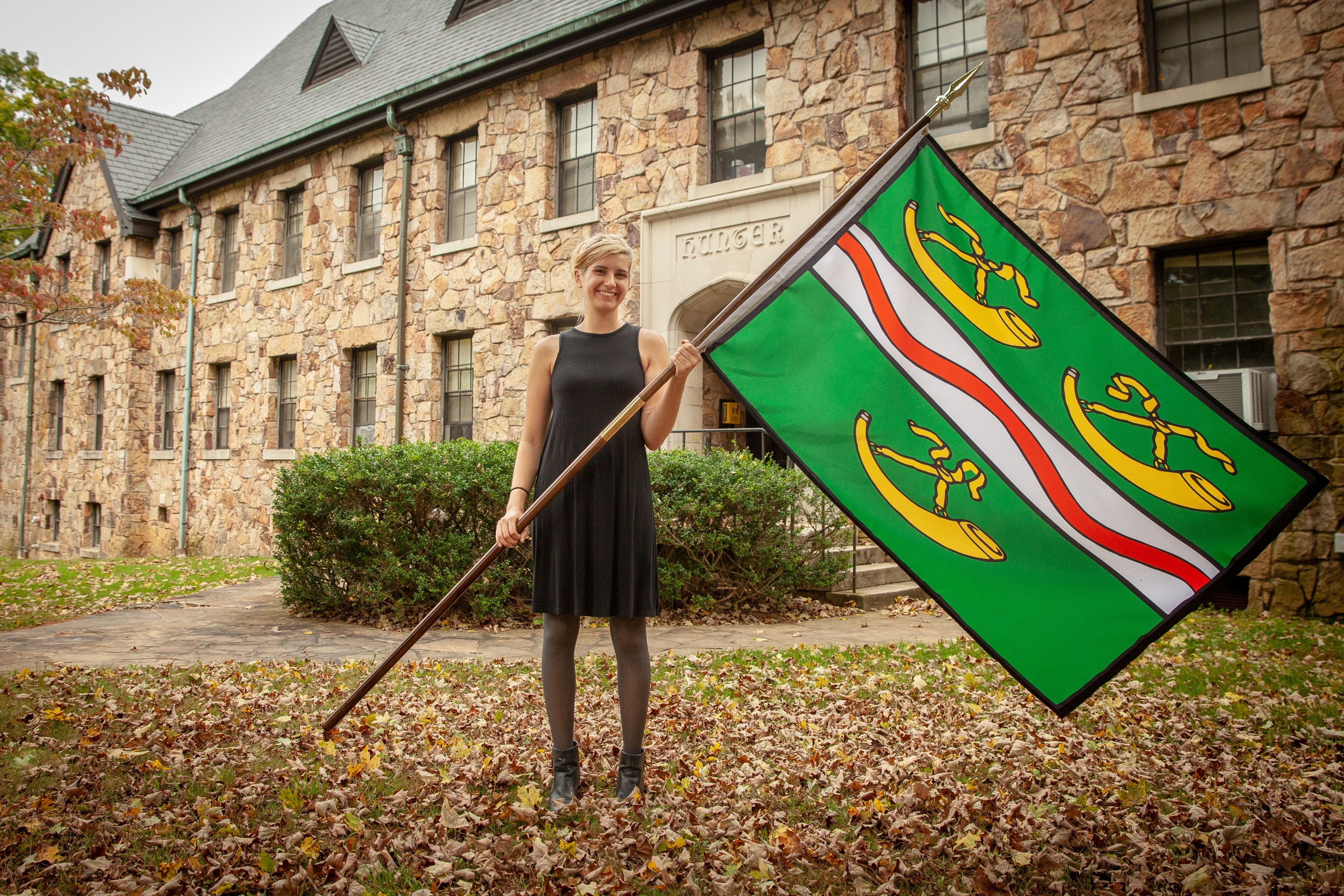 Henri Bonner is a junior environmental arts and humanities major from Huntsville, Alabama.

The green of nature and the three hunting horns are a play on the family name, and the wavy red line on white is an indirect reference to the family’s prosperity in the beverage industry. 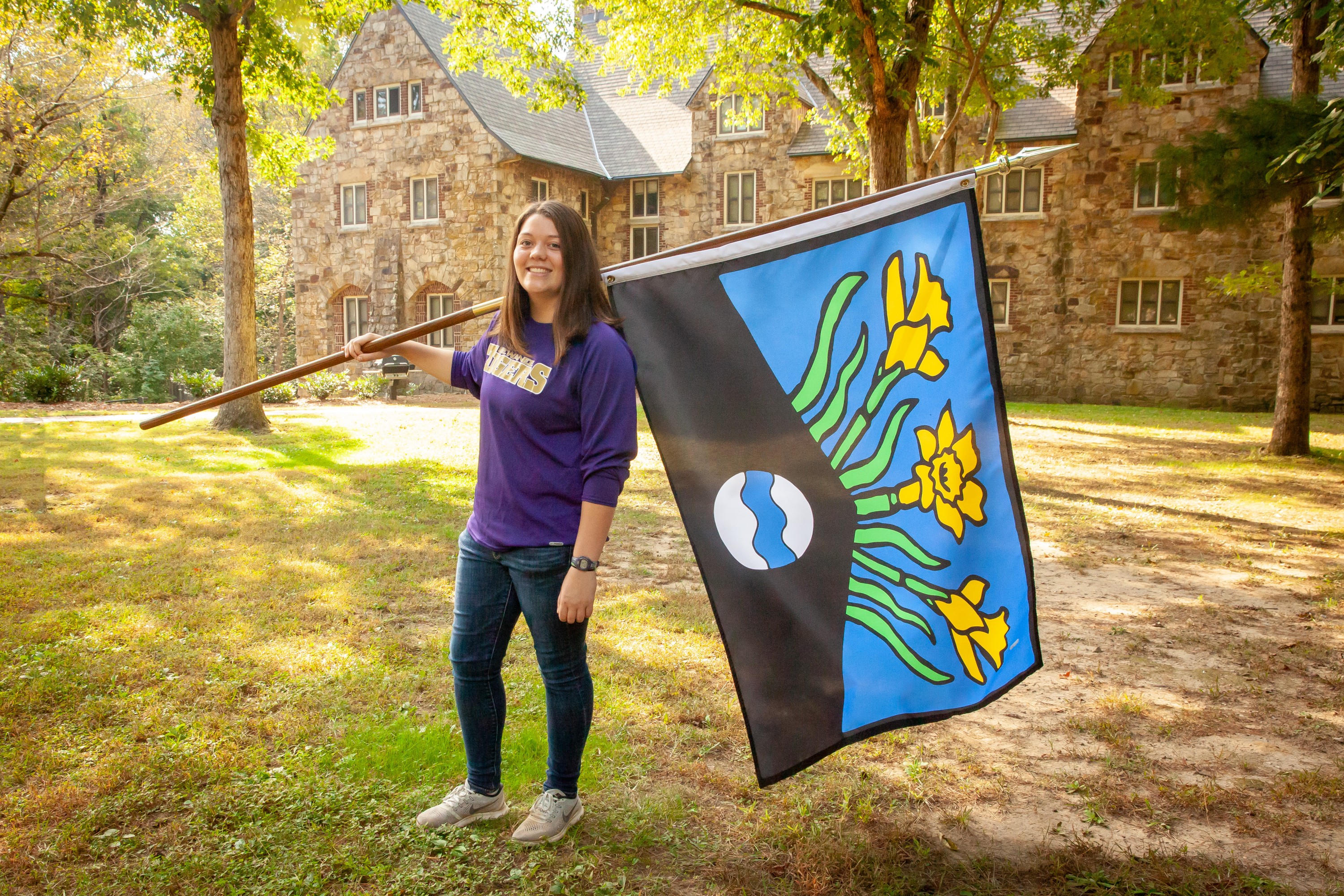 Sarah Johnson is a freshman from Gruetli Laager, Tennessee.

Since its construction, Johnson has been appreciated for its backyard hill of daffodils. Beneath its hill is the essential ATO spring, a major source of water for the town’s first century. 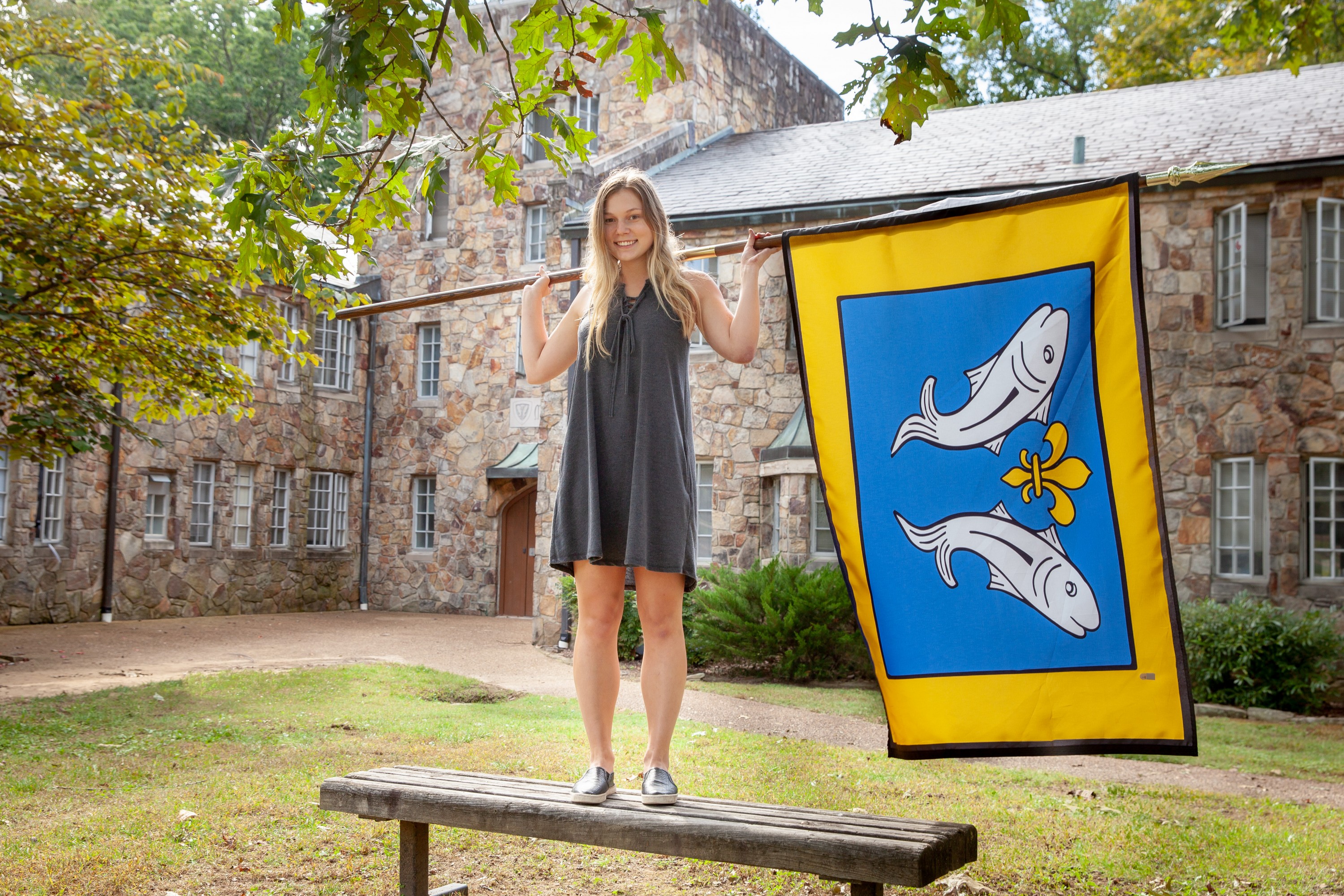 Margaret Deane is a sophomore from Las Vegas, Nevada.

The family arms are those already displayed over the main entrance to McCrady Hall. 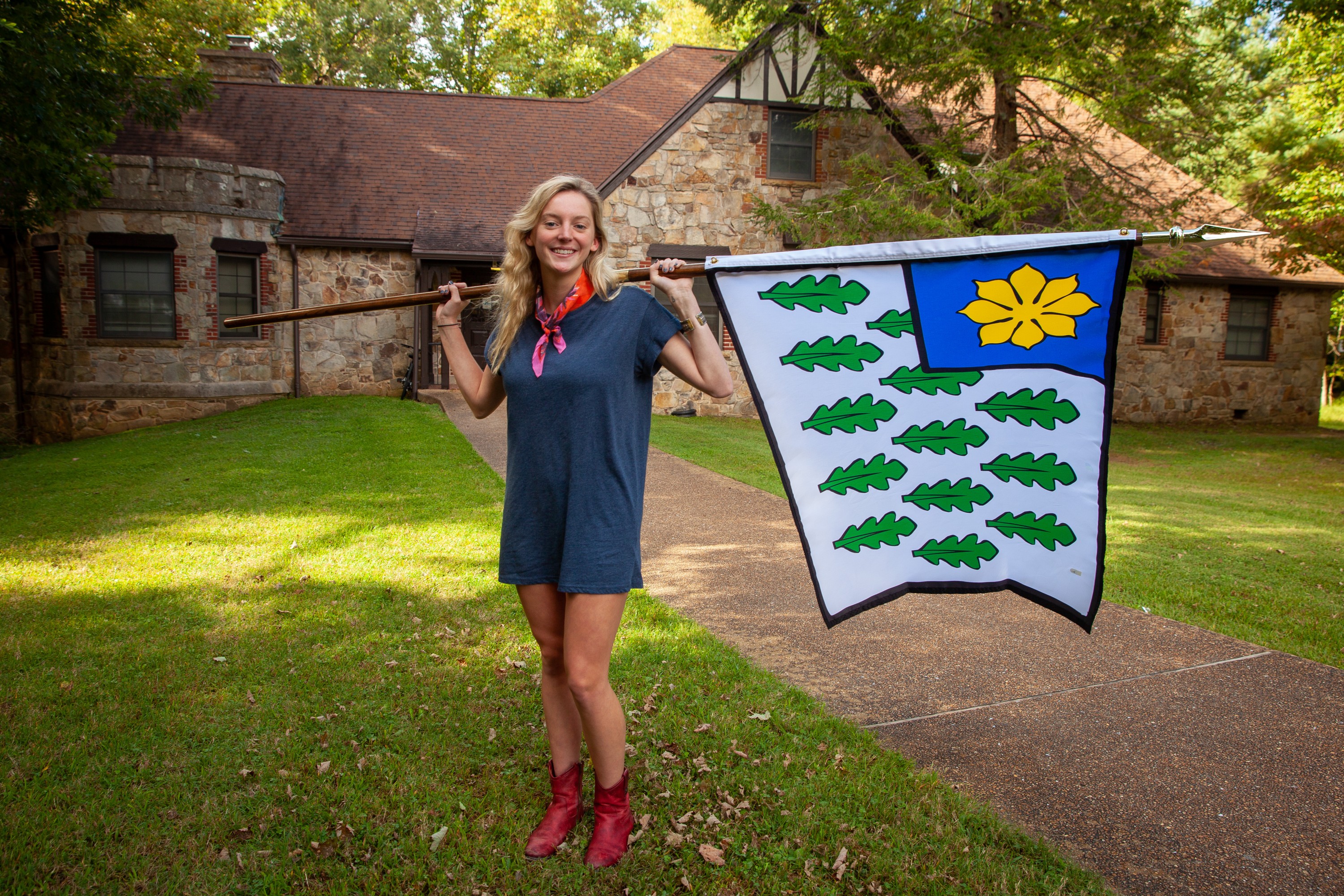 Kathryn Civils is a sophomore from Birmingham, Alabama.

This most private building is nestled in the oak forest. The octofoil is the heraldic mark of cadency showing that this residence hall is the ninth-built surviving permanent residence hall. 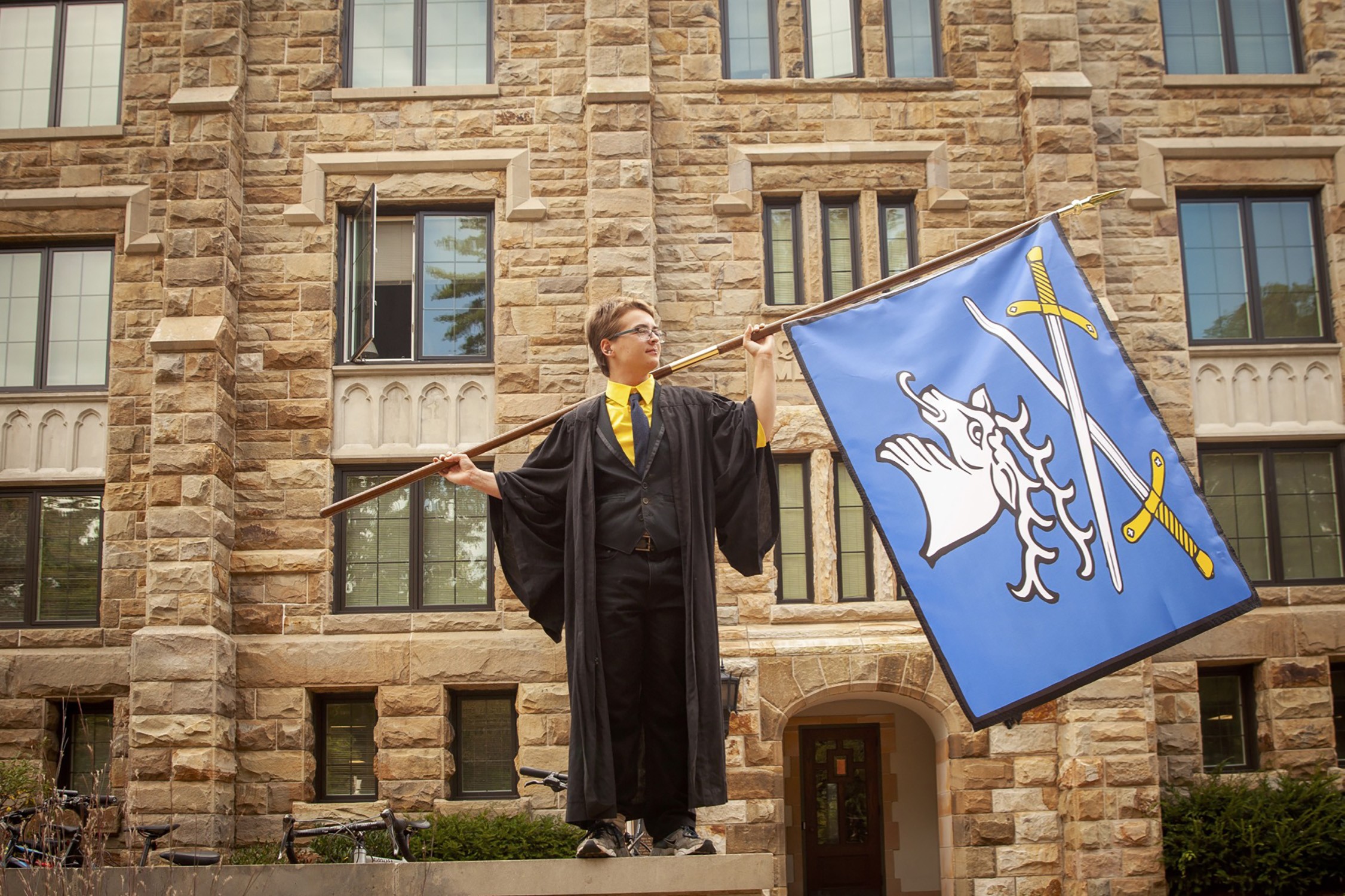 The white buck’s head on a blue field is from Bishop Quintard’s personal arms. The crossed swords recall that the building served military cadets for seven decades. 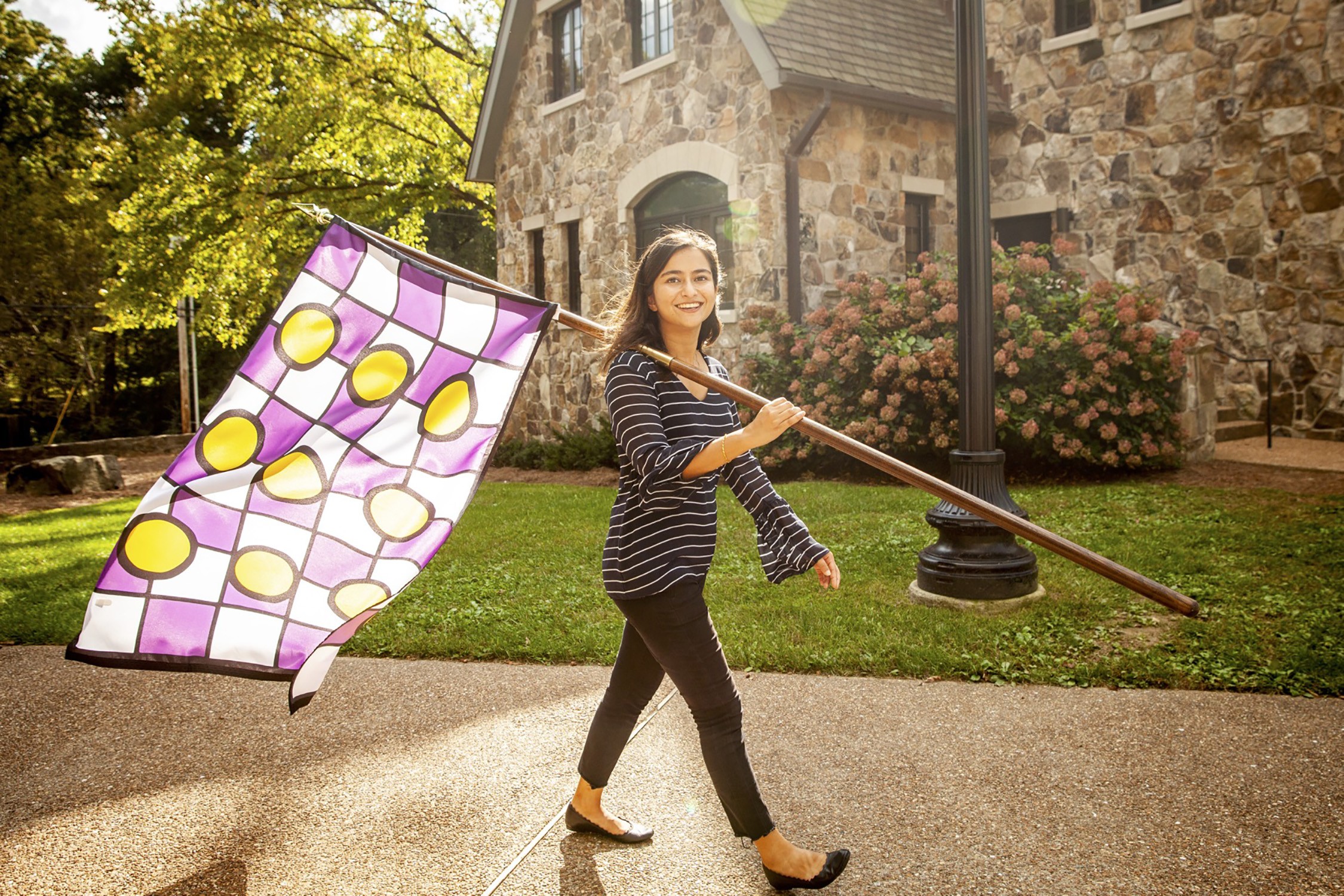 Komal Kunwar is a senior environment and sustainability major from Kathmandu, Nepal.

The checkered field recalls the popular purple and white of Sewanee’s athletic colors. The nine circles, as set in the gables of the building, represent the school’s first nine students. Smith Hall is the most centrally located residence of all, and those students all received their education within a few hundred yards of the site. 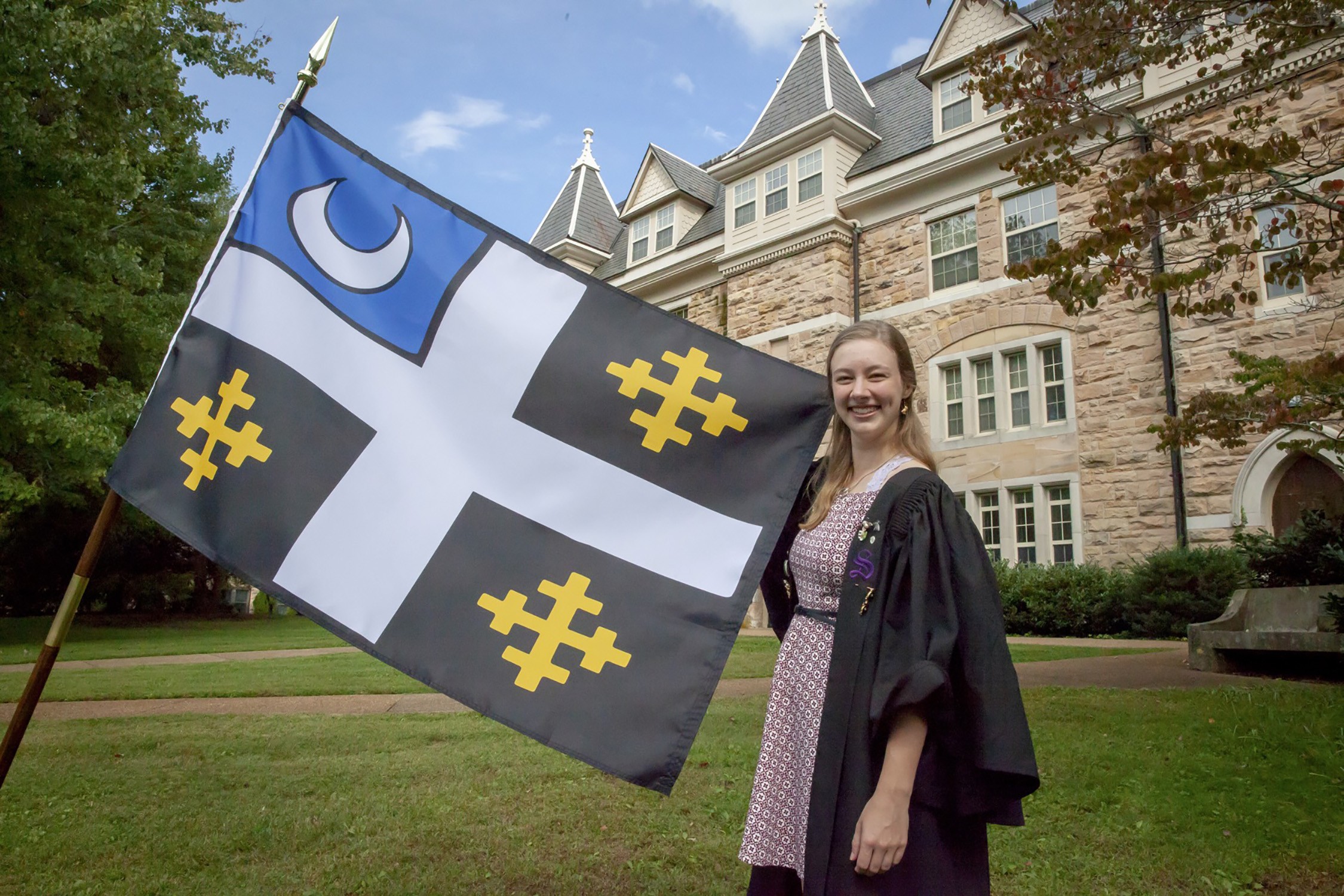 The black and white pattern reflects the Manigault family arms (the building’s original donors) with the Episcopal Church’s outreach crosses substituted to recall that for a century the building was home to the School of Theology. The crescent is the mark of cadency ranking the building as second oldest of the permanent residence halls. 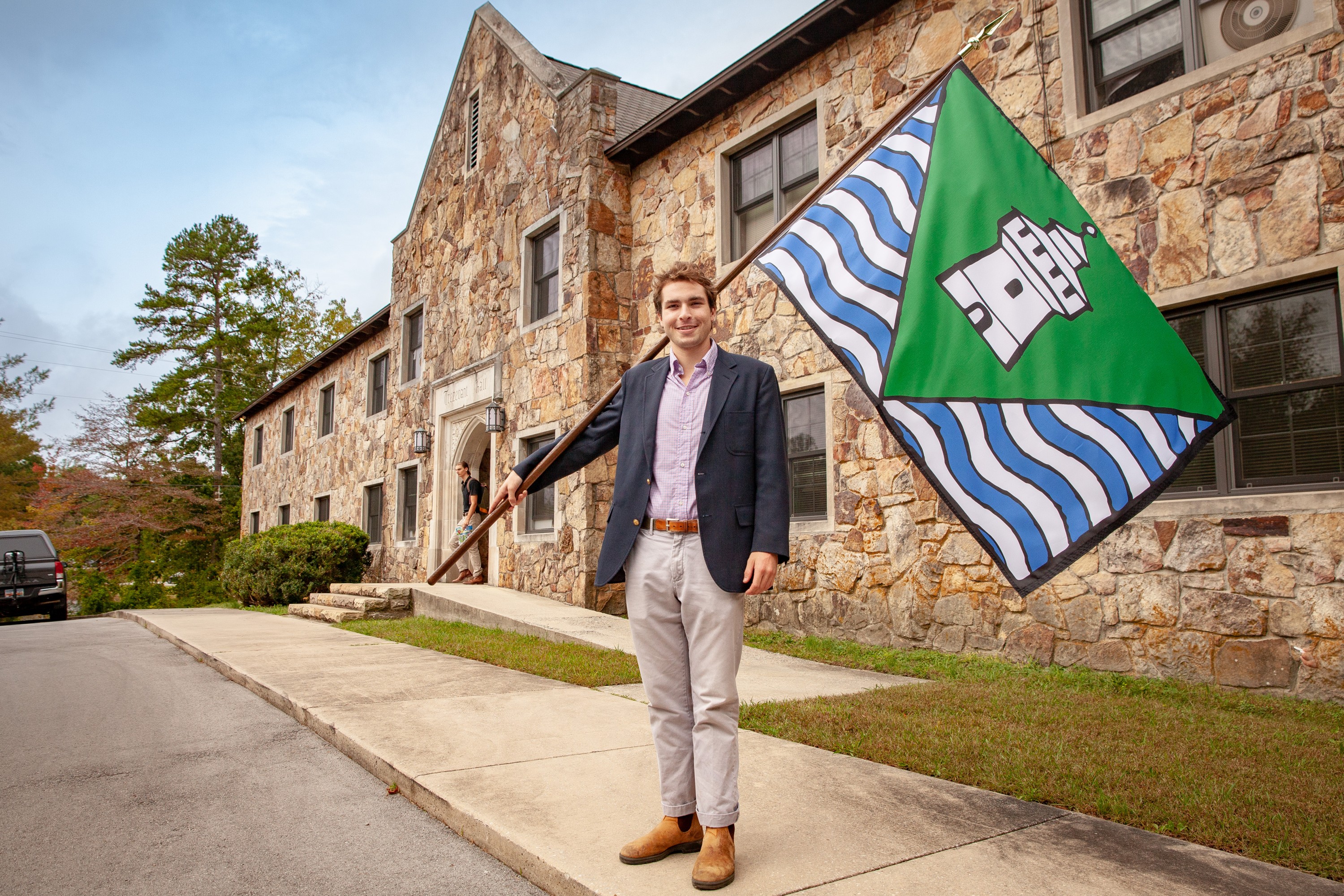 Henry Fisher is a sophomore from Sewanee. 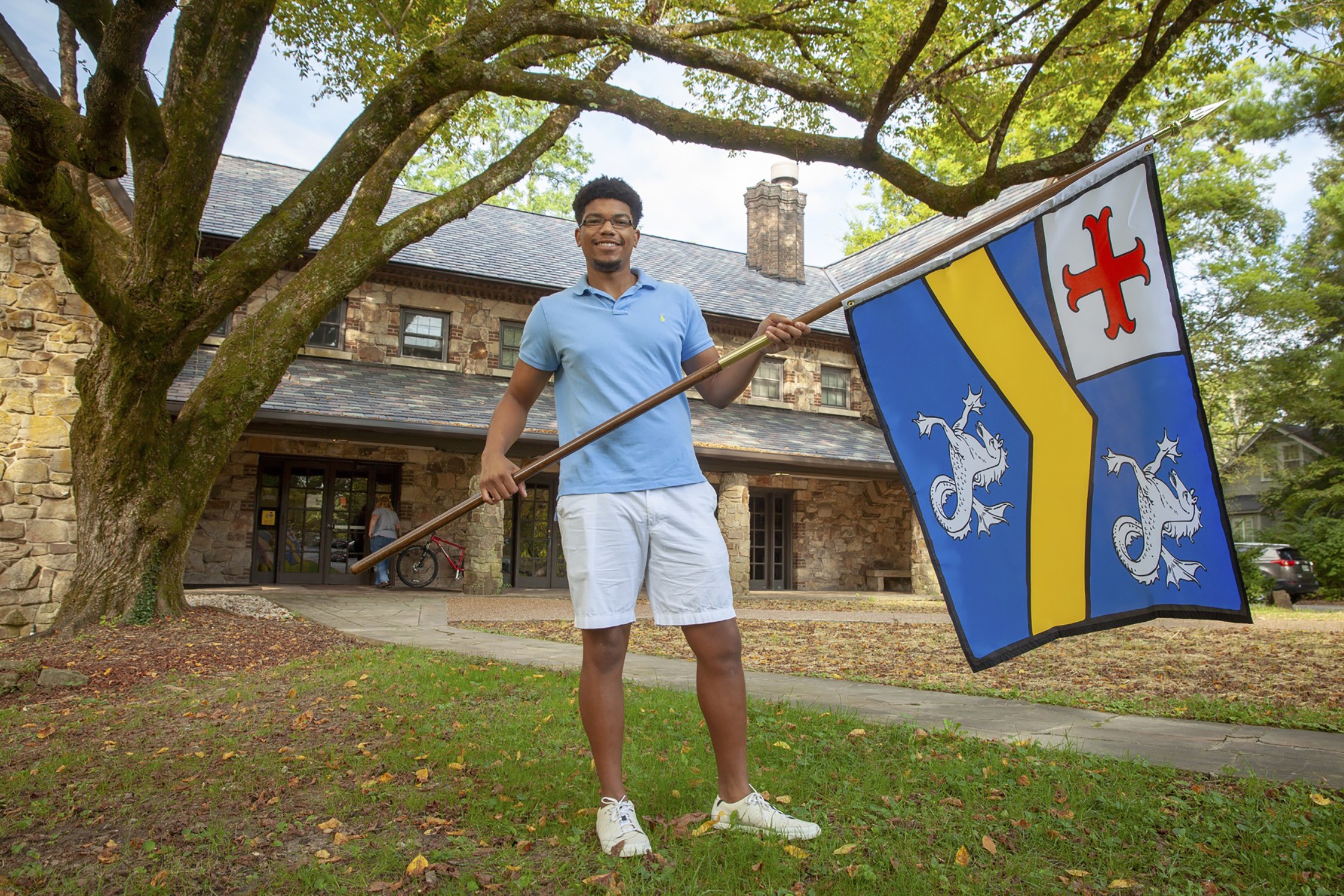 J.C. Spencer is a senior economics major from Brownsville, Tennessee.

The field, chevron, and seahorses are from the arms of the Tucker family, who “tucked away” their guests in this building (which was originally an inn). The canton of a cross moliné represents that Tuckaway is historically the eighth permanent residence hall.