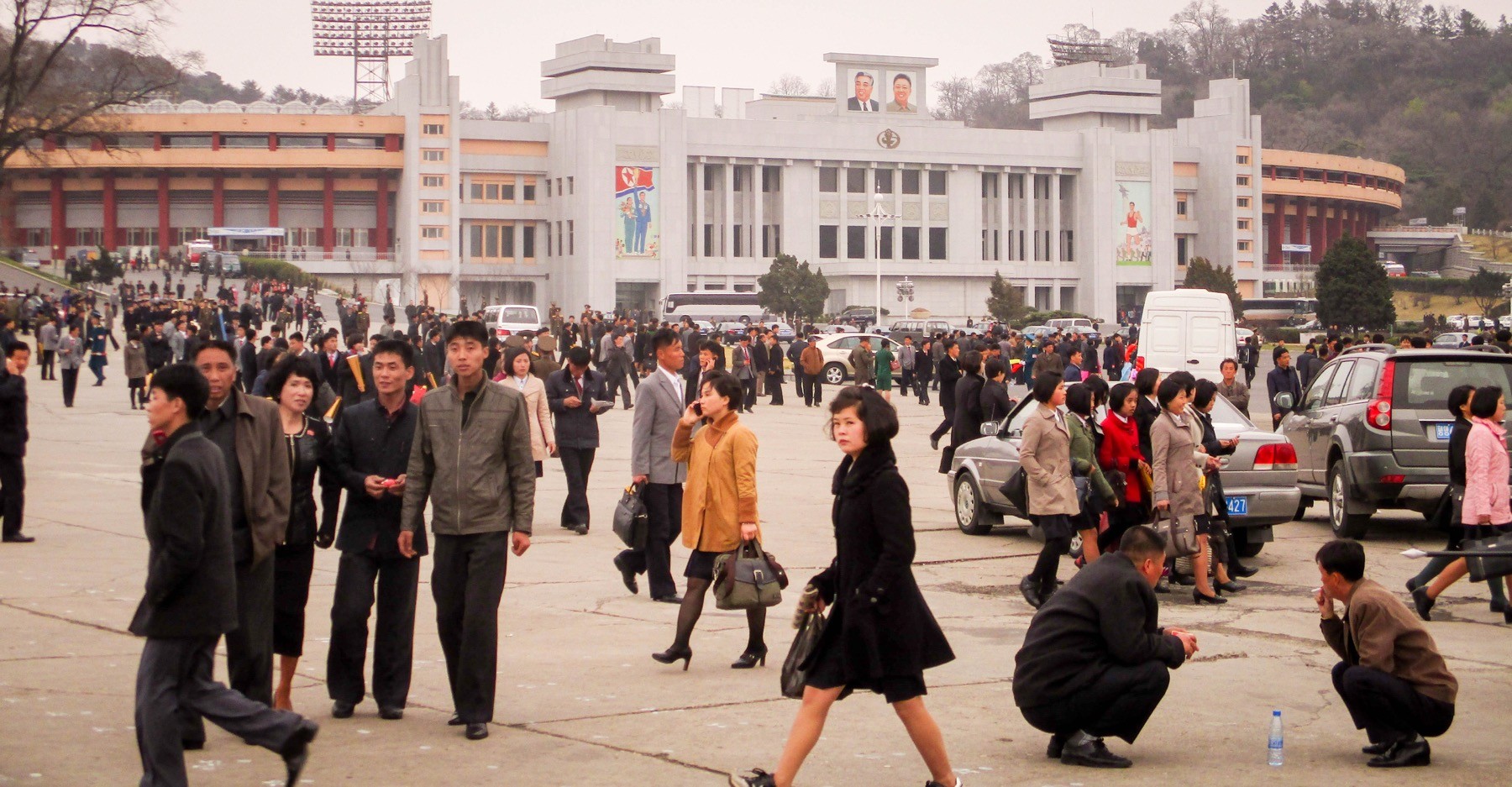 Late on an April afternoon, North Koreans go about their daily lives on a plaza in front of Kim Il Sung Stadium in Pyongyang. The stadium facade depicts Kim Il Sung and Kim Jong Il. Photo by Kelly Whitmer

As tensions between the United States and North Korea continue to rise, a Sewanee history professor recounts her recent trip to the heart of the Hermit Kingdom.

Iwasn’t sure what I thought about the idea at first, but then it started to grow on me.

Last January, my mother-in-law, who had already been to the Democratic People’s Republic of Korea twice, invited me to join her on another trip; this one would include the opportunity to participate in the Pyongyang Marathon. We would do the 10K.

It was April, so the current U.S. travel ban was not yet in effect, and North Korea was not as frequently in the news as it is today. Getting ready to board our Air China flight from Beijing, I was a little nervous. Where was I going? What would I find there? Once in the DPRK, I realized there were people from all over the world already visiting the country, and I embraced the opportunity to learn everything I possibly could from the trip.

The first indication that things would be different here came at Pyongyang International Airport. Moving through customs, we were asked to declare all forms of media (books, magazines, etc.) that we were bringing into the country. A border agent checked our materials for content that could be considered subversive or dangerous to the regime.

Our guides from the Pyongyang Koryo International Travel Company stayed with us for the entirety of our visit. They were welcoming, professional, and open to discussing a range of topics, even those of a political nature. But they also expected that we, as visitors to their country, would be respectful and open to their interpretation of DPRK history, culture, and the socialist principles that inspire them.

To be clear: I have genuine concerns about the current government in place in the DPRK, particularly its record of human rights abuses and threats of nuclear war; however, I do not believe that choosing to travel to a country is an indication of one’s support for that country’s current government. A tourist’s decision to travel to the United States is not a sign that they support the sitting president and are not concerned about any number of problems and challenges facing our country. For me, the opportunity to travel to the DPRK meant a chance to see for myself, to push past the regime and its facade: What glimpses of everyday life might be possible here? How and why do people understand their relationship to the DPRK government in the way that they do?

Images and statues of the “great leaders”—President Kim Il Sung, General Kim Jong Il, and Marshall Kim Jong Un—are everywhere you look in Pyongyang. That’s because they are viewed as royalty and as possessing special personal qualities that enable the state to survive. Kim Il Sung became president in 1948, following the occupation of the peninsula by the Japanese during World War II; he developed ties to the Soviet Union and invaded South Korea, a moment that marked the beginning of the Korean War in 1950. The legacy of the Korean war—including the role of U.S. troops, who defended the South—still looms large in the DPRK, as does the legacy of Kim Il Sung’s Juche philosophy, a kind of Marxism that promotes principles of both self-determination and subordination to a “great leader.”

Our first stop after leaving the airport was to a central place in Pyongyang with two massive statues of Kim Il Sung and Kim Jong Il. We were encouraged to buy flowers and then were led to the base of the statues, where we paid our respects by solemnly bowing and placing the bouquets at the leaders’ feet. This symbolic gesture of respect set the tone for our entire visit.

In the coming days, we were taken to Mangyongdae, the birthplace of Kim Il Sung, and to a variety of monuments and museums that tell, in various ways, the story of the leaders and the history of the DPRK. I also learned later that even the “morning chorus” played through loudspeakers starting around dawn every day was connected to Juche and the idea of the state’s ubiquitous presence. The song is called “Where are you, dear General?” and it was written for a North Korean opera, “A True Daughter of the Party.” The opera follows the story of a nurse during the Korean War who dreams of meeting the great leader one day. Say what you will about the subject of the song, the tune itself is beautiful, as is a lot of North Korean music.

I was especially pleased to have a chance to see some mass dancing, which occurs mainly around the time of a national holiday and involves thousands of men and women dancing at once in traditional colorful costumes. It just so happened that the time of my visit also coincided with preparations for the “Day of the Sun,” a major public holiday that celebrates the birth of Kim Il Sung. We were able to watch huge crowds assembling to practice a variety of mass marches and routines scheduled to be performed on this day.

The presence of the state was inescapable; we were reminded of it constantly. But most of the people I saw were simply going about their lives—heading to work, to school, traveling, moving, meeting up. They were walking or taking public transportation; I noticed fewer cars on the streets. Refreshingly, there were no billboards cluttering the skyline with advertisements for McDonald’s or hair-growth remedies. We stopped at a bowling alley for a delicious lunch one day and watched groups of friends playing a leisurely game.

Our visit to Pyongyang’s subway offered another snapshot of daily life, with people pausing to read the news on the platforms or to admire a variety of colorful mosaics featuring the great leaders, cherry blossoms, and scenes of the city.

On the day of the marathon, I was overwhelmed by the groups of families and young people standing along the route cheering us on. I was also struck by the thousands of people who had traveled to Pyongyang to participate in the race, in part to compete but also because they believed in coming to enjoy and to run this race. They did not ask: “Why would anyone bother traveling here, a place so seemingly cut off from the rest of the world?” Instead, they approached travel to this place as an opportunity to understand through engagement, not the opposite. We all came away from the experience more aware of a range of issues related to the geopolitics of the region and to legacies of the Cold War that we are all implicated in.

The trip changed my life in several ways I did not anticipate. There were indeed moments I wondered if I had made the right decision and found myself feeling vulnerable, or out of my comfort zone. Now I know that my decision to go was the result of two interrelated commitments I carry with me every day, even into my classroom in Sewanee: Embrace opportunities when they appear, even if the paths they present seem unfamiliar, daunting, and strange. And be curious and open to the experience of new places and people, even parts of the world you are told are not worth visiting. You never know what you might be able to learn and what that experience will yield.