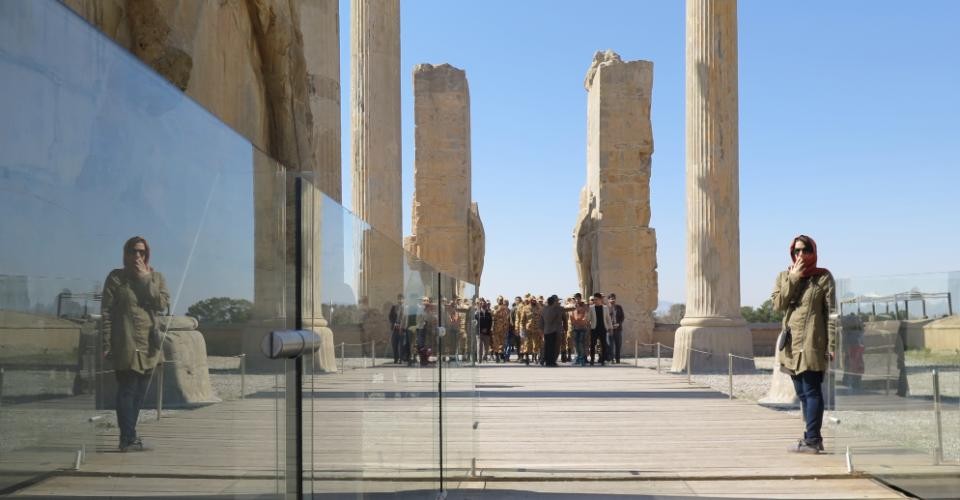 Emily Ochsenschlager at the ruins of the ancient city of Persepolis. Many Iranians say they love to visit Persepolis because it reminds them of how great Iran once was.

In the weeks after the U.S.-Iran nuclear deal went into effect, NPR producer Emily Ochsenschlager, C’03, traveled to the Islamic republic to find out what the future holds.

T he first time it really hit me that I would soon be traveling inside the Islamic Republic of Iran was during our descent into Tehran’s Imam Khomeini airport at 4:30 a.m. on the first day of February. As the plane dropped closer to earth, bare-headed women in skinny jeans began rifling through their carry-ons, pulling out looser-fitting pants and long scarves, and heading to the lavatories. When they returned to their seats minutes later, they were covered with headscarves and trench coats. They had swapped their Western fashions for clothes that complied with the Islamic dress code, but I couldn’t help noticing that they were pulling it off with grace and style. When it came to wrapping my headscarf, would I ever be nearly as fashionable as the women of Tehran? I doubted it.

I was traveling to Iran, for the first time, to produce radio coverage with Steve Inskeep. As one of the hosts of NPR’s Morning Edition, he’d been to Iran three times prior to this trip, but this visit was different. Many analysts and Iran watchers felt that the country was on the precipice of change. The Iran nuclear deal had gone into effect on Jan. 16, 2016, with the United States and the European Union lifting economic sanctions, and we were landing in the country just a few weeks after that.

This was not a fact lost on my parents or loved ones. Plenty of friends asked me how I felt about traveling to Iran. To tell them the truth, I didn’t think too deeply about it. I’d been on several international reporting trips before, both to the Middle East and to Paris after the November terrorist attacks. There is so much preparation, and so much research that has to be done, that I didn’t have time to worry about some of the things that my parents worried about.

The drive from the airport to Tehran was a bit of a blur. I was simultaneously exhausted and trying to take in as much of my surroundings as possible. Scenes whipped past me—there was the tomb of Imam Khomeini (the first supreme leader of the Islamic Republic), rising magnificently from the desert. It seemed that every overpass and bridge was covered in Iranian flags fluttering in the morning breeze. As dawn broke, the car’s radio played the morning call to prayer. A few blocks from our hotel, we drove past men lining up outside bakeries to get traditional Iranian breads.

As it turns out, our arrival provided a pretty good snapshot of the country. Imam Khomeini still looms large. There are portraits of him and the current supreme leader, Ayatollah Ali Khamenei, everywhere. They’re in the airport, in government offices, on murals on the sides of buildings. They’re almost as omnipresent as the Iranian flag bunting that festoons bridges and overpasses. I would learn just how much pride Iranians have in persisting despite what many perceive as a deck stacked against them. The call to prayer was an obvious reminder that this is a country that many believe to be deeply religious, but that notion (I later found out) is tricky. While we’re all familiar with the TV footage of Iranians chanting “Death to Israel” and “Death to America,” that’s not an accurate portrayal of the majority of Iranians. When I identified myself as an American, most Iranians I talked to spoke of their deep admiration and respect for the United States. They had many questions for me about what life was like in America and were always quick to add, “We’re not what you see on television.”

That couldn’t have been more true, based on what I saw when I went to a women-only park in north Tehran. The idea of gender-segregated parks might sound sexist and oppressive, but this park was one of the most open places I visited. Because it was just women, we didn’t have to wear headscarves—we were literally able to let our hair down. Women weren’t self-conscious about exercising openly here, and the rules that govern how women can dress felt a little looser.

At a covered picnic table, a group of young women were playing music and laughing as they blew up balloons. They were celebrating a birthday with a beautiful strawberry cake. One of them had taken care to hang streamers from the eaves of the roof covering the picnic bench. It could have been a birthday celebration anywhere, if not for the roar of the infamous Tehran traffic in the distance. The women were kind enough to turn down the music so we could talk. I asked them whether they felt like things were changing, whether they felt like they could push the envelope on how they dressed or how they wore their headscarves. They said they hoped that some things were changing, but that change took time. They wanted to be a little freer to do as they wished, without having to ask for parental permission or worry about running afoul of the dress codes. As we continued to talk, they asked me about life in the United States.

“Do you have to get your parents’ permission to stay out late?” one woman asked. “Do American women wear more or less makeup than Persian women?” another asked.

The questions might seem superficial, but they reminded me of something important. Though we may not be allies on paper, there is a tremendous curiosity between Iranians and Americans about one another’s daily lives. Even my translator, who was an English teacher in Iran, was full of questions about what life was like in various cities in the United States. She quietly confided that she hoped that she and her boyfriend might move to the United States for graduate school someday.

I got a glimpse of daily life when I rode on Tehran’s metro. We were traveling from the city’s poorer southern end to a northern, well-to-do part of town, and stopping along the way to talk with people on the street. Visually, the Tehran metro reminded me of New York’s subway system. There’s minimal seating, and cars are densely packed during rush hour. It’s different, though, in that there are women-only cars in Tehran. Women aren’t required to ride in these single-sex cars, but it’s an unspoken encouragement. I found the experience to be relatively pleasant. There were more available seats than in the men’s section. I didn’t get any strange looks or wandering hands (both things I’ve experienced on the D.C. metro). One woman offered me her spot by a pole so that I could steady myself. I talked with a few women on the metro, but we didn’t have incredibly substantial conversations. It wasn’t for lack of trying but because whenever you’re talking to Iranians, they have to be very careful about what they say. Saying the wrong thing or even associating with the wrong people can have tremendous consequences.

Later in the trip, I got to experience another mode of transportation in Iran when we flew on a Boeing 707 to Shiraz. (As a result of sanctions, Iran hasn’t been able to modernize its passenger airline fleet. This was something I was aware of, but didn’t mention to any loved ones and tried to willfully ignore.) The city of Shiraz is known for many things, including being the birthplace of the great poet Hafez, and it lies close to the ruins of the ancient city of Persepolis. We spoke to many Iranians who said they love to visit Persepolis because it reminds them of how great Iran once was. They spoke in the past tense, longingly, of a time when the world respected and admired Iran.

Just outside the gates, we met a young couple and their young daughter. They were sitting on a blanket, with a modest picnic in front of them. They told us that they visited Persepolis every week to take in the beauty. As they talked, it became apparent that they couldn’t afford regular admission, and that they’d become accustomed to admiring the ruins from a distance. The husband, in his 30s, told us he was working a factory job that he was overqualified for. He was saving money to take his family to Canada. The soft-spoken wife said she was reluctant to leave her family behind. They, like so many other young Iranians we talked to, had a difficult choice to make. Do they try to leave and find opportunity elsewhere, possibly thousands of miles from their families? Or do they hope that the economic change that was just beginning to take hold will trickle down to them and change their lives substantially? It is a tough question, and I often tried to ask myself what I would do if the roles were reversed. Would I move thousands of miles from my family to start a new life in a foreign land? I never came up with an answer that I felt sure of.

Normally, when I leave a country after a reporting trip, I feel a sense of relief. There are many late nights. There’s a lot of stress, especially when we’re working with unreliable connections. Our only way to call home was on an outdated brick Nokia cell phone. A week without talking to my fiancé was tough, but on the flight back home, I found myself thinking less of what I had left behind and more about what would become of the Iranians I had met. Would the woman who helped me with translations in the park move to the United States? Would she be issued a warning for wearing her headscarf back too far on her head as the warmer months approached? Would the family outside of Persepolis decide to stay in Iran? Months later, I still don’t have answers to these and so many other questions. I hope I’ll have a chance to go back and get more answers someday.