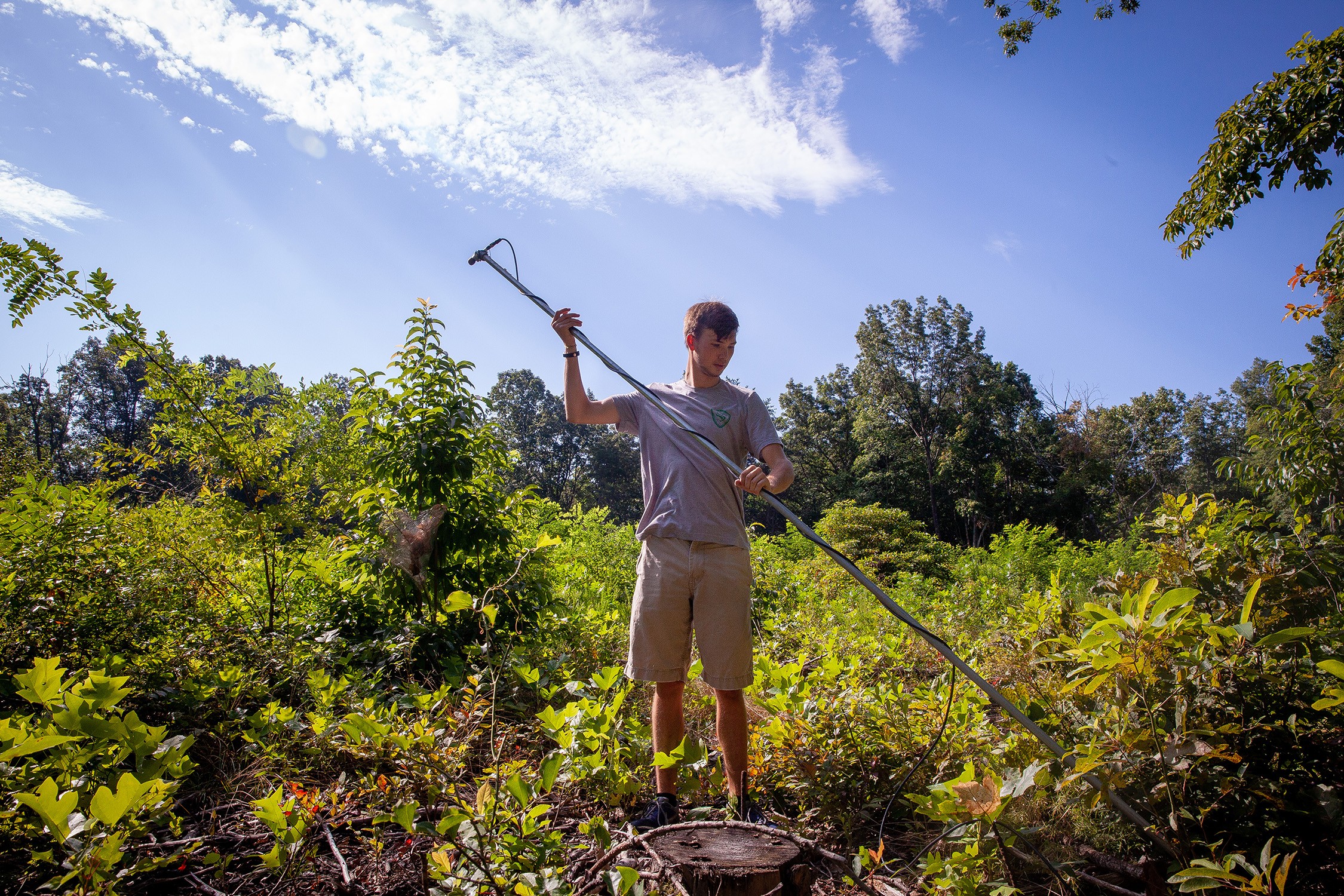 Cole Johnson, C'20, sets up a bat monitoring microphone in a forest clearing on the Domain.

Scientists from around the Southeast descend on Sewanee to survey bat populations and get a look at the kind of ecological research being conducted on the Domain.

Drawn by the promise of a presentation on local bats, a friend and I follow “Bat Blitz” signs to Sewanee’s Cravens Hall. The previous morning, the Fulford Hall parking lot had been filled with big trucks sporting out-of-state plates and carrying what looked like camping gear and long poles. A propane burner sat out on the landscaping between two parking rows, and one truck pulled a small yellow enclosed trailer with the words “Myotis Wagon” and silhouettes of bats painted in black. (Myotis is the genus of mouse-eared bats.)

When we get to Cravens, we find the parking lot relatively full for a summer evening, but no Myotis Wagon is in sight. We scan the field and see a lone figure standing next to Cravens, by what seemed to be a low-country boil, with big pots sitting on propane burners.

We stroll over. “Is this the Bat Blitz?” we ask the man, who turns out to be Chris Simpson, a diversity biologist with the Tennessee Wildlife Resources Agency (TWRA). “You’re in the right place, but you’re too late; they’re all out in the field,” Simpson says. “And if you mean the public event, you’re really late. That was last night.”

Between checking equipment and making calls on walkie-talkies, Simpson and a colleague, TWRA biologist Josh Campbell, fill us in on the project. Several teams, made up of researchers, students, and interested parties from across the Southeast and beyond, have fanned out from Sewanee, visiting places where bats might be found on the landscape to capture them with mist nets—virtually invisible nylon or polyester mesh nets suspended between two poles. The main purpose is to get some idea of population numbers and diversity of the bats, but also to assess their general condition.\

“We weigh them, measure their forearms, and band them so we can learn something if we catch them again in another night of mist netting,” says Simpson. Teams have spread out to multiple locations and will be out much of the night. “They will come in about 2 or 3 in the morning, and that’s when we decontaminate the equipment,” Simpson says, pointing at the boil pots.

Hibernating bat populations across the country are in decline because of a fungus known as white-nose syndrome (WNS). Infected bats wake up more than they should during the winter, which uses up valuable fat stores, leading to them becoming more and more unhealthy, until they fail to thrive or even fail to survive. This eventually leads to major population declines along with the loss of benefits that bats provide in the ecosystem. This blitz is a way of learning about the local bat populations and assessing their general condition, and it’s not just a hobby. Bats are a kind of thin brown (or gray) line holding back insect hoards; they’re also active pollinators and seed dispersers.

Amy Turner, director of Sewanee’s Office of Environmental Stewardship and Sustainability, has worked with colleagues to turn her attention to bats in Sewanee. Turner and her student workers, including Cole Johnson, C’20, are involved in a program of continuous monitoring using a network of acoustic monitors around the Domain attached to digital recorders. In turn, the recorders are tied in with software that can not only recognize that bats are present but can identify the species.

“We are monitoring all kinds of wildlife,” notes Turner, who not only does her research on the Domain but also supports the work of others. “We are particularly interested in the bats because we are concerned about white-nose syndrome; also, the presence of different bat species provides an indication as to how we are doing with our forest management practices. All of this information allows us to implement, monitor, evaluate, and adapt as necessary.”

The week after the Bat Blitz, Turner and Johnson visit one of the Demonstration Forest plots down Breakfield Road. The Demonstration Forest is an area of active forest management that involves the creation of clearings in the forest, doing prescribed burns to change the mix of vegetation, and planting native species such as shortleaf pine, a fire-tolerant species that was once common on the Plateau when burning was common but is now crowded out by oaks. The whole process is designed not only to bring in revenue but to restore biodiversity to woods dominated by a few species.

From dusk to dawn, bats fly above the small clearings searching for insects, and the monitors placed by Johnson and Turner record their presence. Data will be collected and then analyzed and compared to the previous summer’s data. Then students, including Johnson, will have an opportunity to present this data at venues including professional meetings and Scholarship Sewanee, an annual celebration of student research.

Over the course of three days, the 91 people who descended on Sewanee to survey for bats generated 162 mist net nights and over 930 net hours for those three nights. They captured 385 bats during that time with species diversity including the federally endangered gray bat, big brown bat, red bat, hoary bat, eastern small-footed bat, evening bat, tri-colored bat, and the Rafinesque’s big-eared bat. Numbers were not as high as hoped, partially due to the effects of WNS, unseasonably cool weather, and a full moon.

“Not catching any little brown bats was a big deal,” says Turner. “People were pretty disheartened by that, mostly because we know what white-nose syndrome has done to the population. If you sit around the campfire and talk to biologists who have been doing this for a long time, they will tell you stories of catching little browns all the time before WNS started appearing in the early 2010s.” On the other hand, the team tags 48 gray bats, an animal that often appears in Turner’s digital logs. “Gray bats seem to be doing really well, and we have a lot of them here,” she says, explaining that cave-obligate bats rotate between a winter home and a summer home, even though both of those homes are caves.

In the forest clearing, Cole Johnson disassembles a bat-monitor microphone boom and packs it into the UTV in which we are riding. “I really enjoyed the Bat Blitz,” he says. “It was great getting to see so many people working together to study the animals.” This summer, Johnson worked as a research assistant with Turner and was involved not only with the Bat Blitz but also small mammal monitoring. He also worked on Sewanee’s Constructed Wetland, and conducted stream surveys and turtle trapping with Assistant Professor of Biology Kristen Cecala. The research supported by the Office of Environmental Stewardship and Sustainability was in turn supported by Johnson and his coworker Eli Walker, C’19.  “It has been a great summer,” Johnson says.

While Johnson’s summer work was in field biology, his main academic interest is in preparing for medical school, so his enjoyment of the research assistantship is making him reconsider his future. “Yes, we are making it hard on Cole,” says Turner. “And what is harder is that he has essentially been offered an opportunity to compete for an internship with TWRA in Tullahoma next summer. This says a lot about the caliber of Sewanee students. Both Eli and Cole greatly impressed everyone they met while working at the blitz, and I know that several people they talked to are ready to help give them a leg up, no matter what career path they choose,” says Turner.

Arnold Engineering Development Complex (AEDC) at Arnold Air Force Base has been a huge partner for Turner in her bat monitoring. “To handle federally listed bat species, you have to be permitted, and I have continued my relationship with my colleagues from my time working with the U.S. Fish and Wildlife Service while stationed at AEDC,” Turner says.

John Lamb at AEDC helps conduct winter surveys annually at Sewanee. “These surveys allow us to get a better handle on bat populations and winter habitat, and to relate this to our acoustic data,” Turner says.

Turner’s work is making an impact not only on students like Johnson, but on the public as well. The bat talk my friend and I missed was a rousing success, and featured actually catching and banding two bats on the Village Trail, which runs from the School of Theology campus to the Village. She has organized routes on the Domain for birders to use when they are doing regular bird counts, so that citizens can add to the knowledge base by making observations in consistent locations. An inexpensive version of the bat recording software is available as a smartphone app —Wildlife Acoustics Echo Meter Touch 2—with modestly priced hardware available to add to the recording capacity. The Demonstration Forest, which Turner is managing with Domain Manager Nate Wilson and Professor of Forestry Ken Smith, has netted grants for forest restoration and shortleaf pine plantings. The team has also worked together to secure a grant from the Arthur Vining Davis Foundations for headwaters-related research that has a public application.

“We’re here to encourage Domain-based research no matter who is doing it—professors from any department or the general public,” Turner says. “It all helps us understand our piece of the world better.”