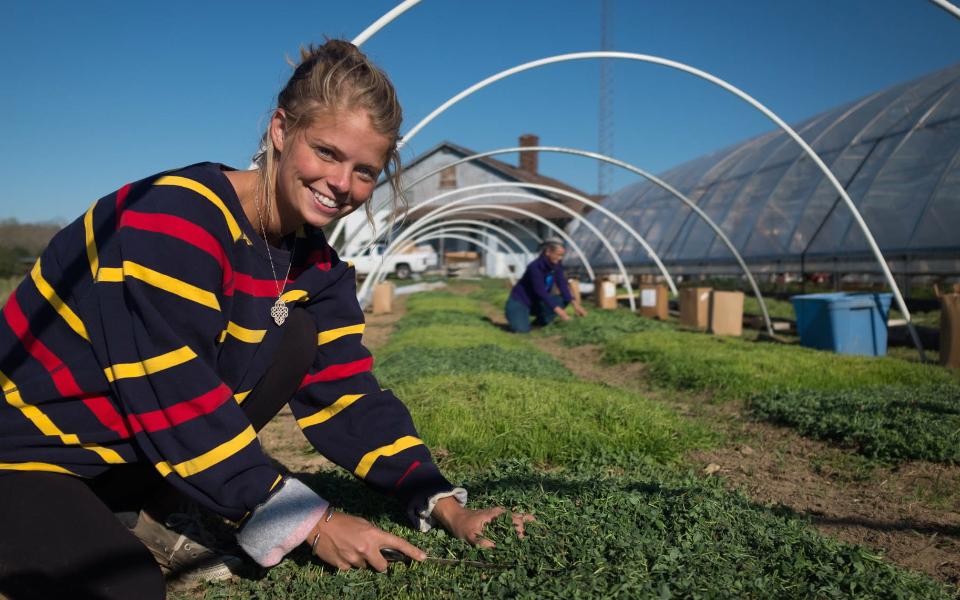 Brigid Lanigan harvests microgreens that will be dried and then submitted for lab testing to determine if biochar has affected the plants' nutrient content. Photo by Stephen Garrett, C'01

A bright spring day finds Brigid Lanigan, C’16, next to the old University Dairy building near Lake Cheston, where a new 95-foot-long high-tunnel greenhouse was erected earlier this year. She crouches down and uses a pair of scissors to carefully cut rows of tiny plants that have been growing in an adjacent smaller greenhouse, which was built for her capstone research project. These tiny plants are “microgreens”—in this case soft red winter wheat and Austrian winter pea. Microgreens are grown and harvested in less than three weeks and can be cultivated from a variety of plants. They are used primarily in salads, soups, and juices. In a few days, once the clippings have dried, they will be weighed and sent to a lab to be tested for nutrient content.

A senior environment and sustainability major, Lanigan has an interest in soils and how they transfer nutrients to plants. While exploring soil-related topics for her capstone research project, she learned about “biochar,” a form of charcoal that is used to improve soil. Her advisor, Assistant Professor Russell Fielding, connected her with Sewanee’s new farm manager, Carolyn Hoagland, who has a master’s degree in soil and crop science, and is pursuing a Ph.D. in microbial ecology. Hoagland and Lanigan devised a novel study to test the effects of applying biochar to soils used to grow microgreens. Many studies have demonstrated the benefits of using biochar to improve the growth and nutritional value of long-term crops grown to full size, but there is little to no published research on using biochar with short-term crops like microgreens.

Biochar can be made from organic waste or other renewable materials like tree branches. Lanigan and several student volunteers collected branches from around the Domain and constructed a “pyrolysis apparatus” out of metal scraps. Pyrolysis is the process of converting organic matter into charcoal in the absence of oxygen at high heat. The students’ apparatus consisted of a series of horizontal metal tubes on a frame that was encased in sheet metal. Branches were placed into the tubes and a fire was lit at the base of the apparatus. As the tubes heat up, gases and moisture begin to escape from the wood through holes drilled at the base of each tube. Once the process is complete and the apparatus is sufficiently cool, the students open the tubes and remove the biochar, a highly porous, carbon-rich charcoal. When applied to soils, biochar helps to retain moisture, regulate pH, and helps soil hold on to nutrients and fertilizer. It is thought that the millions of tiny pores within the biochar may provide a safe haven for beneficial microorganisms, which create nutrients that are absorbed by plants.

Once Lanigan and her friends produced enough biochar for the project, she distributed it onto a portion of the 32 individual plots within the study. Her randomized study design compares control plots (with no biochar added) to plots where biochar has been applied, to a third group that has had nutrient-rich worm manure applied, and to a final group applied with both biochar and worm manure.

“The farm is a problem-rich environment,” Hoagland says. “When a student goes to a lab, the procedure for that lab and the outcome of that lab are usually well known. But the farm isn’t like that. There are a lot of open-ended questions out here and a lot of opportunities for independent research so that people can exhibit some creativity.”

"I definitely could have done something a lot less intense for my capstone project," Lanigan says. "But I really wanted to do something at the farm because I am so interested in it."

If the study is successful and there is solid evidence that biochar is beneficial to growing microgreens, the University Farm may purchase a more efficient pyrolysis apparatus. That would allow the farm to produce more microgreens for McClurg Dining Hall and to produce biochar for other crops.

With the help of students and Americorps VISTA volunteers, Hoagland is expanding the farm and plans to construct several more greenhouses in the near future, in order to be able to produce food in the fall and winter. Soon the farm will also begin to plant apple, pear, and nut trees. A greatly expanded composting program will turn food waste from Sewanee’s food services into new soil.

At the core of all of this activity is the farm’s central role as a teaching tool, inspiring a lifelong interest in food production, land stewardship, and sustainability in students like Lanigan.

“Brigid has been relentless. She’s been fearless, and she’s learning about the scientific process in a way that is enduring and transferable,” Hoagland says.