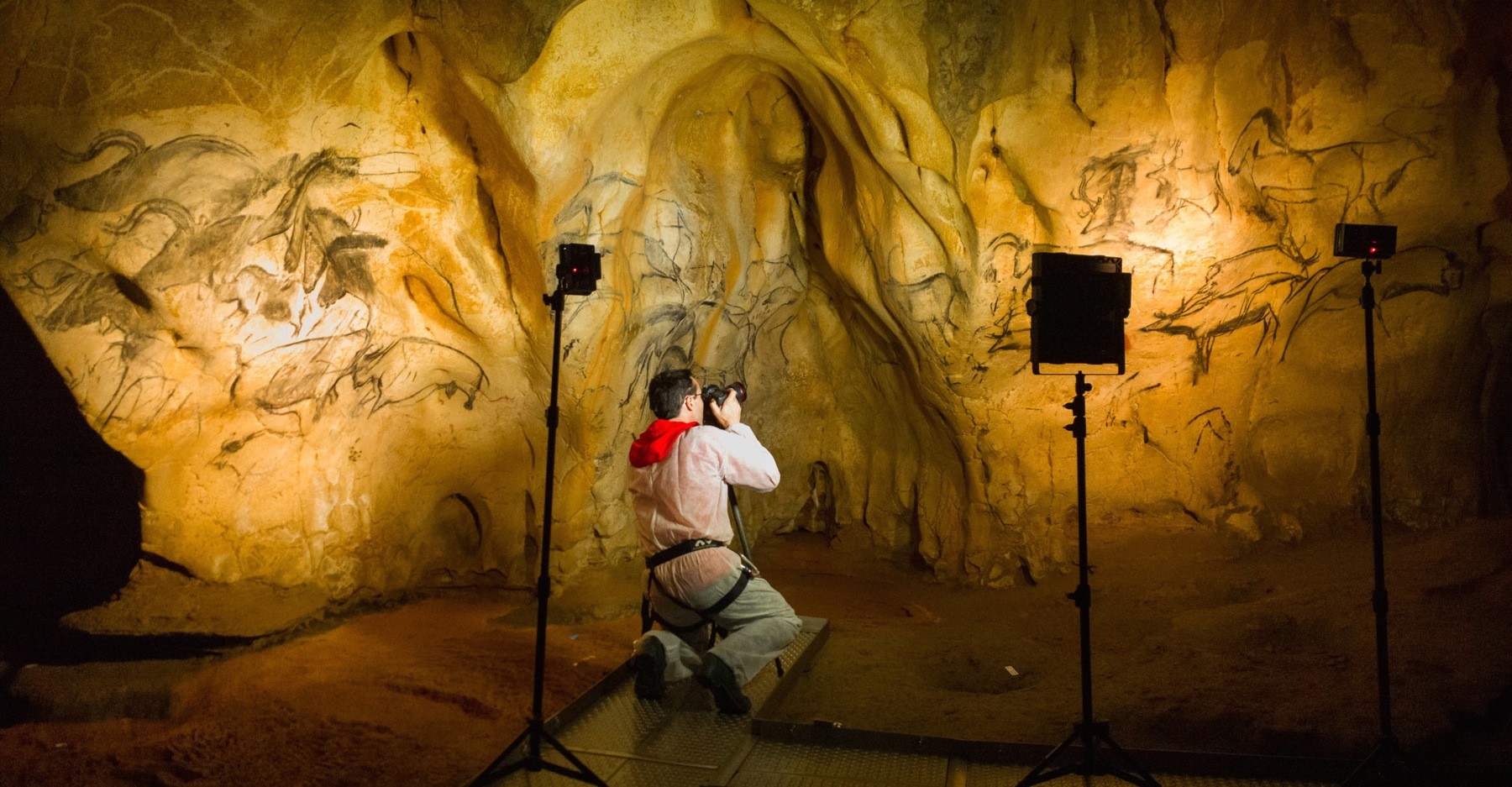 Messages from Across the Millennia

By cataloging and preserving the world’s oldest art, photographer Stephen Alvarez, C’87, is providing clues to understanding the human condition at its very origin.

S tephen Alvarez didn’t want to look at cave art that day. He’d had his fill of dark spaces. It was the spring of 2010, and he was spending every day underground photographing the catacombs of Paris for National Geographic. “All I wanted to do was sit on the beach and drink beer,” he says. But his wife, April, had something else in mind.

April noticed their journey to the beach from Paris would take them near the city of Montignac, home of Lascaux, one of the most significant examples of Paleolithic cave art in the world. “Your wife is smarter than you, so you go,” says Alvarez of their decision to make the detour.

Discovered in 1940, Lascaux, now fiercely protected by the French government and closed to visitors since 1963, features 20,000-year-old renderings of animals, human figures, and other abstract signs. A full-scale reproduction of the cave, Lascaux II, opened in 1983, and it was there that Alvarez had a thought. A question, really. A question that would lead to the creation of the Ancient Art Archive, the first centralized effort to document and catalog humanity’s oldest visual stories.

Alvarez is something of a rarity himself. Born and raised in Sewanee, he graduated from the University in 1987 with a religion degree and then set out set out to pursue a career in photography. In 1996, he would receive his first assignment from National Geographic, a trip to the highest peaks in the Andes Mountains. Since that assignment, the photographer, filmmaker, and explorer has traveled to every continent on the planet, documenting the world as only he can see it. In 2015, he provided the foreword for Rarely Seen: Photographs of the Extraordinary, a book produced by National Geographic featuring the places, phenomena, events and objects most humans will never see.

It was also in 2015 that the yellow-bordered magazine would print “The Origins of Art,” the story inspired by Alvarez’s visit to Lascaux II—and the question it left him with—nearly five years earlier. “I walked in [to Lascaux II] and the lights came on, and I thought a couple of things very quickly,” he recalls of that 2010 visit. “This art is as sophisticated as anything I’ve ever seen, and whoever painted it thinks exactly like I do. We’ve been people a lot longer than I thought. So what’s the first evidence of modern thought?” The pursuit of an answer would take him to the southern tip of Africa, back to France, even to caves in Tennessee.

At Chauvet-Pont-d’Arc, a cave in southern France, the country’s minister of culture would give Alvarez, the first non-scientific photographer allowed entry this decade, six hours to complete his shoot. Half a kilometer into the cave, in a space devoid of all natural light, 36,000-year-old paintings decorate the wall. Cave lions, horses, rhinos, reindeer—animals we might never envision together—fold into grooves and smaller chambers. One of the predominant scenes, the Lion Panel, measures nearly four meters in length.

The topography of the cave is as much a tool as the paint, a kind of ocher, is itself. Images repeat, giving the appearance of a pack of animals or maybe just one animal in motion. There is an animation-like quality to the work, like an ancient flipbook. It becomes easy to imagine the way light from a fire or torch could make the images dance across the wall. A story unfolds, one that the artist or artists would have risked their lives to tell.

Inside Chauvet, the bones of 12-foot-tall cave bears, a species similar to a grizzly bear and now extinct, still litter the space. Long claw marks run through many of the paintings. “People would go in to paint this stuff and would have no idea if there was a bear in there,” says Alvarez. “This [work] was important. This was important enough to risk dying.”

It’s impossible to know exactly what the artists were trying to convey, and Alvarez is careful not to conjecture. But this need to communicate, to develop and share an artistic sensibility, leaves him with a simple takeaway: “We’re all related. We’re all connected.” Now through photography and 3D imaging, he is able to collapse 36 millennia. “We can have that person speak to us across a gulf of time.”

By the end of the “Origins” story, Alvarez knew he was at the start of something big. For a year, he would work privately on what would eventually become the Ancient Art Archive, which launched publicly as a nonprofit last month. His work at Chauvet became the basis for his work in photogrammetry, a painstaking technique that combines hundreds, sometimes thousands, of images together. Once combined, Alvarez can create information-rich 3D models that map depth, height, and the distance between various points while also bringing to life surface textures. It’s Smithsonian meets Hollywood, and it’s as close to actually being there as you can get.

“We’re trying to let people experience a shared culture,” says Alvarez. Whether it’s Paleolithic cave art in France, Barrier Canyon Style petroglyphs in Utah, or mud glyphs in Tennessee, the Archive is working not only to preserve earlier cultures’ legacies but to continue to press on that question of modern thought. Could we—people from around the world and spanning the millennia of human history—be more like one another than different?

While sites like Lascaux and Chauvet are protected, most are not. Threats including climate change, religious intolerance, and tourism put these fragile places at risk. The sense of urgency to document these places is real, but this is not fast work. Some of these sites are nearly impossible to reach and incredibly challenging to shoot. One site in Mojave County, Arizona, requires a 15-mile hike, one way, across the trail-less north rim of the Grand Canyon. Then there’s Unnamed Cave #19, a 50-meter-long, 15-meter-wide cave in a remote corner of the southeast United States, with a very low ceiling and no light. Alvarez uses LED panel lights to illuminate the fine finger-traced drawings found along the ceiling as he moves his camera, hovering it above the cave floor, across the space. He’s already taken more than 1,500 images here. “When the model is complete, we will be able to view the entire mud glyph passage as one composition,” Alvarez says.

It’s this ability to see these works of art as more complete units, multidimensional, data-rich resources, that is one of the most compelling aspects of the project for Jan Simek, president emeritus and distinguished professor of science in the Department of Anthropology at the University of Tennessee at Knoxville. A longtime collaborator of Alvarez’s and a member of the Archive’s board, Simek has spent over four decades studying prehistoric art.

“We know in Tennessee, for example, that many of the individual images in these caves were actually placed there in an ordered fashion so that there are stories being told,” says Simek. How the images are placed, which way they’re facing, what images accompany one another, what the distance is between one image and another—all these spatial data points become part of the larger story. “That’s the context at which we begin to tease apart the sites so that we can begin to identify patterns and understand how they relate to mythologies, to social structure, to religious beliefs, how we figure out what they might mean.”

That’s the question that always seems to arise: What does it all mean? Wild animals drawn in dark caves, seven-foot-tall anthropomorphic figures painted onto canyon walls—whose eyes are we looking through? “The human propensity to engage with and change the world in which people live based on their perceptions of the spiritual world in which they dream is really incredible,” says Simek. “There are very few pathways to that, and this [project] is one of them. So we’re standing at the very beginning of a scientific process that has huge potential for understanding the human experience and the human condition at its very origins.”

If it sounds like an enormous undertaking, that’s because it is. The Archive is setting out to do something that’s never been done before—not to this scale—and it’s just getting started. Part preservation, part education, part art, all science, tracking the earliest evidence of modern thought is no small feat. Like most scientific endeavors, it is revealing more questions than answers. “They are speaking,” says Simek of these earliest artists. “We are not able to listen to them just yet. We are grappling with ways to try and hear their words.”

To learn more about or donate to the Ancient Art Archive, visit ancientartarchive.org. More images from the Archive can also be found on Instagram @salvarezphoto.