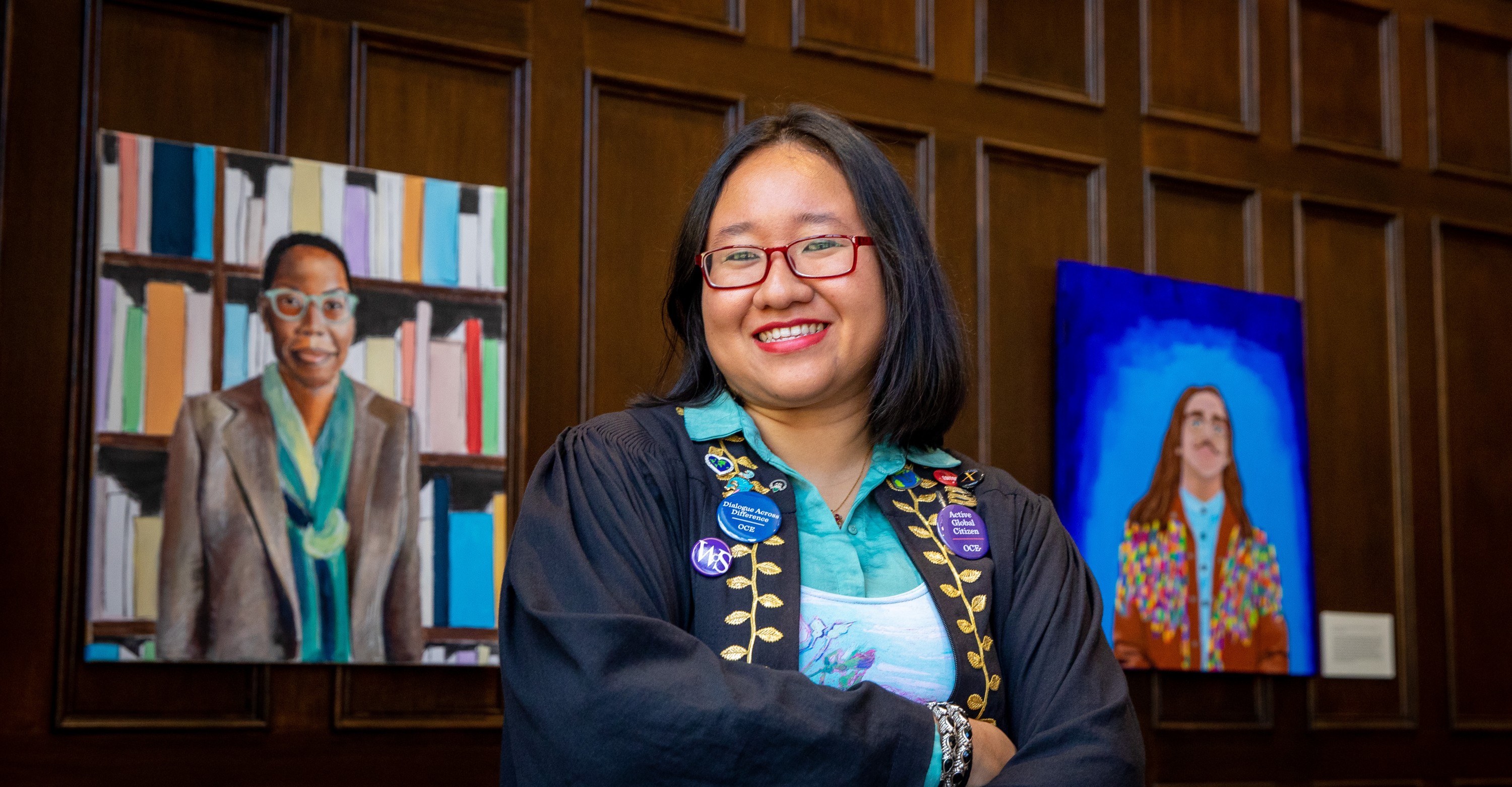 Mandy Moe Pwint Tu, C’21, wanted to know what it would look like if the University community were represented more broadly in Sewanee’s public spaces. Now, thanks to an art professor and her students, she has an answer.

“Tell a story about a time you truly felt represented on this campus. Tell a story about a time you didn’t.” These are conversation starters Mandy Moe Pwint Tu, C’21, plans to use in upcoming dialogue sessions, a part of a yearlong project, “Honor Through Language,” that aims to examine how the words individuals choose can promote greater community and understanding or prevent them altogether. “Honor Through Language” is a program of the Organization for Cross-Cultural Understanding (OCCU), of which Tu is president.

But ask Tu how she would answer her own thought-starters and the response is an exasperated, “Oh boy.”

It’s easier for the Myanmar native, whose first time in the United States coincided with her arrival at Sewanee as a freshman, to answer the second prompt than the first.

It’s so easy in fact that Tu’s been able to turn her experience as an international student into a multiyear, multiproject endeavor to bring more awareness to and conversation around representation at Sewanee.

An article Tu wrote for the Sewanee Purple earlier this year, entitled “The Problems with Our Portraiture,” inspired “Faces of Sewanee,” a new exhibition hanging in duPont Library. The exhibit, featuring paintings of students, faculty, staff, and alumni, offers many members of the University community an opportunity to see themselves, or someone like them, on the walls of a Sewanee building for the first time.

The portraits, all painted by Sewanee students, hang just below portraits of the University’s former chancellors and vice-chancellors, a set of individuals Tu couldn’t help but notice were all white men. In her article, she asked, “... what would it be like if the portraits displayed included those of women and persons of color instead of just white men? How would it contribute to the mentality of the students at this University?”

They’re questions Tu isn’t satisfied to leave unanswered. And now the exhibit, developed by Associate Professor of Art Jessica Wohl, will serve as a launchpad for her to continue discussions around representation on campus through her work as president of the OCCU.

Tu noticed the portraits as soon as she arrived at Sewanee. They were hard to miss. They hung in large gilded frames overlooking the first-floor Learning Commons of the library.

She also noticed that when persons of color were invited to the University to speak, they were set up in Convocation Hall. Like duPont Library, the walls of Convocation Hall are lined with traditional portraits of white men from Sewanee’s history.

“They’re really visible. You can’t not notice them,” says Tu. An English major with a double minor in psychology and women’s and gender studies, Tu’s coursework, along with what was then her new arts column in the Purple, meant her attention was starting to zero in on the portraits more and more. “I don’t think they’re representative of Sewanee today.”

As a woman, a person of color, and an international student, Tu didn’t see anything in those portraits she could identify with. And if she couldn’t, there had to be others.

So, she wrote an article about it in the school newspaper.

In it, Al Bardi, Tu’s psychology professor and chair of the Psychology Department, says that the portraits provide a signal to viewers, pointing to who does and does not belong. When someone experiences enough of these kinds of signals, Bardi says, their mental health and overall performance, academic or otherwise, can be affected.

After the article was published, Tu learned that several professors on campus incorporated it into class discussion. Fellow students let her know the portraits bothered them too, but they hadn’t known where to go to talk about it. And she also got her first online commenter who didn’t care for her position, which she was able to take in stride.

“The portraits are something we don’t really talk about [at Sewanee]. Until now,” says Tu. “I think there is a desire to have the conversation, but there hasn’t been a space or a time or an actual setting.”

But Jessica Wohl was about to help make that happen.

“As the only person who teaches painting in the visual arts on campus, particularly with regard to portrait painting, I saw this [article] as a direct call,” said Wohl at the “Faces of Sewanee” opening. “I wanted to give students the agency to make a change on campus that would have a lasting impact.”

She had an idea.

Wohl believes offering her students that opportunity could mean an important step forward not just for them individually but for the University as a whole.

“The simple representation of people on our campus, other than white men, which we already have representation of, will go a long way in creating a healthy and comfortable space for everybody on campus,” she said.

After getting the proper approvals, Wohl, who as a Jewish woman also feels a personal stake in seeing greater visual representation on campus, added the assignment to her Topics in Contemporary Painting class for the fall semester. From the start, her aim was to have the project completed before Homecoming to help celebrate the 50th anniversary of women being admitted to the University. She wanted to give as many alumni as possible a chance to see the students’ work.

Wohl’s 14 students set out to request permission from the people they wanted to paint. In addition to women, people of color, professors, students, alumni, members of the LGBTQ community, and other underrepresented groups, it was important to the students to ensure that all members of the Sewanee community were represented. That meant including people like longtime University Groundskeeper Danny Anderson, Assistant Manager of Sewanee Dining and all-around Sewanee institution Margaret Evans, and Willie Six, the dedicated African American trainer who served the University’s football team for nearly five decades before dying in 1950.

In total, 18 portraits—each in a style the artist chose—were created. Hanging just below the portraits of the chancellors and vice-chancellors, the pieces, now in dialogue with one another, are on display through May 10. And for the first time in Sewanee history, women, people of color, members of the LGBTQ community and more can be found on the library walls.

Tu, whose own portrait, completed by Gracen Kelly, C’20, now hangs on the wall of duPont, recalls how difficult it was for her when she first arrived at Sewanee.

“The one thing that really got me was how visible I felt,” she recalls. Walking around McClurg, she felt at once like she stood out and that she was totally invisible. She couldn’t point to anything, and hardly anyone, that showed her that Sewanee was where she belonged.

It’s been this tension—being too visible and utterly invisible—that’s driven so much of her work over the last few years and that’s driving the dialogue sessions she’ll host over the next two semesters.

“There’s the dominant narrative, and then there’s what we’re trying to do, which is to highlight some of the other narratives that have always been there but haven’t had the same kind of place in our mainstream conversation,” she says.

“Visual representation matters. If we have different people represented around Sewanee, on the walls, in the literature that we’re reading, the media we’re consuming, then we move away from stereotypes and single stories. We’ll have a multitude of perspectives.”

It could be a chance for students like Tu to move from feeling overly visible to actually feeling seen.