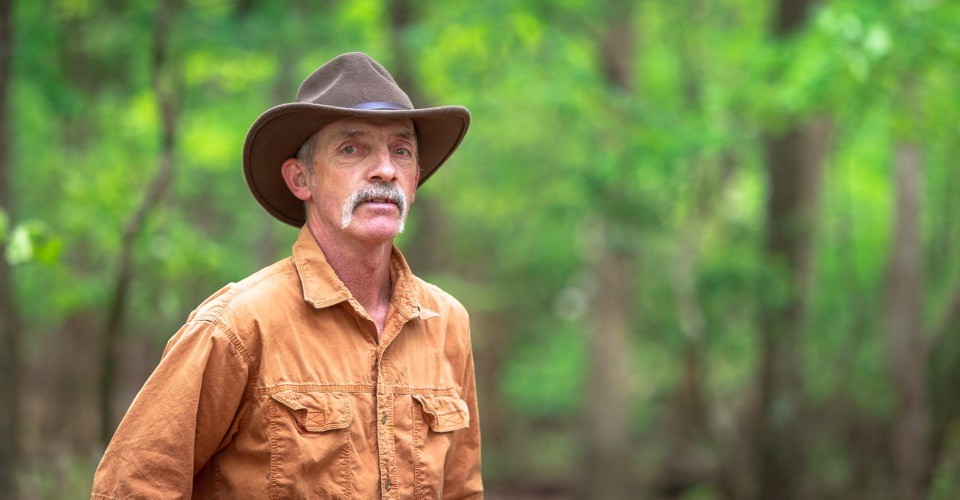 Sandy Gilliam, the University’s first and only full-time Domain ranger, patrols 13,000 acres and teaches all who meet him what it means to really know a place.

S andy Gilliam has been roaming the Domain since his childhood in Midway, when he ranged across the woods down to Lost Cove, fished in the lakes and hunted. Those years taught him to look and listen: “If a hawk comes through, the squirrels let you know.”

Now, he’s the University’s first full-­time Domain ranger. Among his duties are maintaining trails and looking for lost hikers. He also takes students on walks through the woods and shows them what it means to really look at a place.

The increasing use of the Domain for recreation and concerns about potential liability were important factors in the University’s decision to ask Gilliam, who had been acting as a part­-time ranger for more than two years, to give up his day job as a welder at a local factory and join the staff. For Gilliam, who had spent the previous 31 years on the shop floor, “It’s like starting a new life.”

That new life includes some fairly heavy labor at times. He recently finished rebuilding a part of the Cheston Trail, which had become impassable due to severe erosion. After bringing in about 50 tons of dirt, gravel, and mulch, the trail—­­a popular walking area that connects the Lake Cheston parking lot to Clara’s Point Road—­­is now a smooth thoroughfare.

Another day, he spotted the signs of an auto accident on Breakfield Road. A vehicle had clearly skidded off the road, coming to a stop only after ramming a tree. Gilliam documented the scene with photographs and collected evidence of the accident, which had not been reported to the Sewanee Police Department.

Gilliam has a background in law enforcement: He is the constable for the part of Franklin County in which most of the Domain is located, though he does not act as constable while patrolling and working on the Domain. (Constables are elected officials who have some of the powers of law enforcement officers.)

Nonetheless, he does occasionally face tense situations when he discovers illegal activity such as all­-terrain vehicle riders who violate the ban on motorized traffic on the trails and fire lanes. “I’m extra eyes for the police,” he says.

Gilliam is a self­-taught photographer whose work has been exhibited in Sewanee. Perhaps his most well­-known images are those of the Memorial Cross at the bluff end of Tennessee Avenue. Over the years, he’s learned where to shoot from, the best times of day, and the weather conditions that have allowed him to capture striking images of a scene that is notoriously difficult to photograph.

For those who might like to learn from him, he suggests shooting in the late afternoon on a hazy day or just after a storm. “Every time I’ve shot it, it’s a great picture,” he says. “I just look up and I know if it’s time to go.”

Art Professor Pradip Malde and Gilliam have been friends for about 15 years, and Gilliam has been collaborating with Malde’s documentary photography class since 2012.

The experience of working with Gilliam has been transformative for students. One of his teaching techniques is to take student photographers on a walk in the woods. At the end of the walk, he asks them what they shot: The answer is often “nothing,” Gilliam says. Then, they retrace their steps, and “I show them what they missed.” It’s a literally eye­opening experience, and one that has had a profound effect on many students, says Malde.

Gilliam also cooperates with University Archeologist Sarah Sherwood, who studies the archaeological record of the Domain, including rock art, caves, and the rock shelters used by indigenous people in prehistoric times.

He has accompanied Sherwood and her students as they research sites. “She’ll teach you a lot,” Gilliam says of Sherwood.

He’s taught her a bit, too, Sherwood says. “When I spend time walking the woods with Sandy, I learn something, every time. Sandy has been a huge help monitoring the cultural resources on the Domain. He knows the area well and cares deeply for this special place. The University is lucky to have his skills, knowledge, and heart watching over the Domain.”

During a recent morning ride around the Domain, Gilliam also pointed out some of his work as a stonemason­­—his father was a mason, and Gilliam learned the trade from him. He can give a critique of the stonework on many Sewanee buildings and homes. Wide mortar joints and using a chisel to make the stones fit rather than finding the right stone for the wall are two of his peeves.

Domain Manager Nate Wilson is elated to have Gilliam patrolling the University’s landholdings. “It’s great,” he says. “It’s been necessary for a while for us to pay attention to our backcountry infrastructure but until now we haven’t had a position that’s dedicated to backcountry security and maintenance.”

Gilliam is happy, too. He’s getting the chance to do something he loves, he says, and, he adds with a smile, “I'm getting paid for it.”