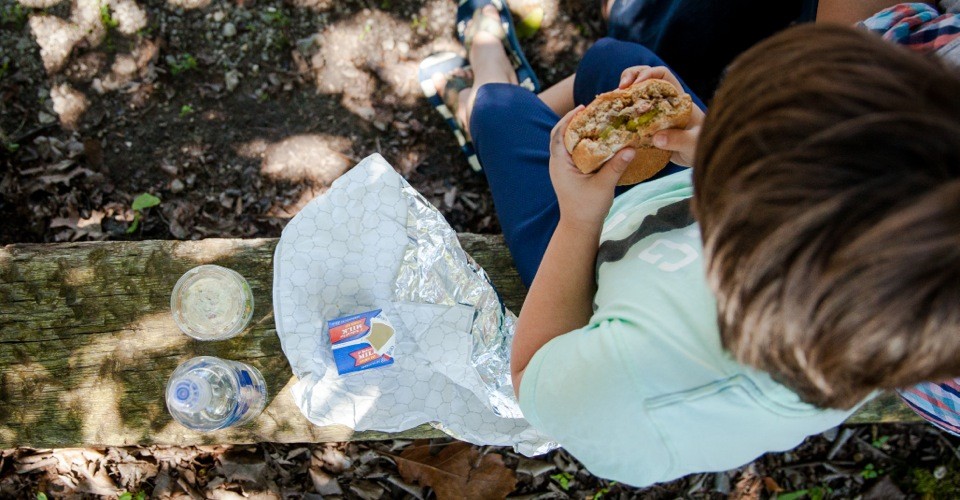 At a recent South Cumberland Summer Meal Program lunch, one boy enjoyed a barbecue sandwich, two sides, and a half-pint of milk. The program provides nutritious meals to children for eight weeks in the summer.

In its second year, a University-led summer meal program is a win-win solution, feeding kids and employing dining service workers.

H ere’s a great summer recipe to feed hundreds of people: Take the biggest commercial-grade kitchen on the Mountain, toss in a well-trained staff with a much-reduced population to feed during the summer months, add a large number of schoolchildren who will enjoy a free lunch and a fun program, and throw in an enthusiastic bunch of volunteers to help. Toss lightly and serve.

If you follow this recipe correctly, the result is the South Cumberland Summer Meal Program, now in its second year of providing nutritious meals to young people in Grundy, Franklin, and Marion counties during the summer months. When schools take their summer break, school lunch programs, which are a major source of nutrition for many children, close down. Children who have regularly had two meals a day experience a big change. Inadequate meal options have long-term implications for the physical and mental development of young people.

According to Feeding America, one in five children in the U.S. face hunger; on the South Cumberland Plateau, it’s about one in four, says Rick Wright, one of the driving forces behind the meals program. Wright is the director of Sewanee Dining, the University’s in-house food service.

“I don’t think people are aware of the state of food insecurity in the United States,” he says. “But it’s here—just outside the doors of the dining hall.”

On the first day of this year’s program, kids started to arrive at 11:15 a.m. at the Beersheba Springs Library in Grundy County. Until then, librarian Melissa Scruggs had been having a quiet day; one older woman picking out the next week’s selection of reading and a couple of young boys playing an educational computer game.

But then, the library was transformed. The beautifully restored log cabin in Beersheba’s historic district filled with parents and grandparents and an assortment of boys and girls from toddlers to preteens. Many kids came to pick up new books—there’s a contest to see who reads the most books during the summer—and others were drawn by the appearance of Margaret Matens, a local wildlife rehabilitator, who would bring her assortment of creepy-crawly reptiles and snakes.

As the library got more and more crowded, Scruggs got a call from Liz Sirney, a VISTA worker who is the program’s coordinator. Sirney manages the complicated logistics of delivering meals from the Sewanee kitchen to the 21 sites spread across Grundy, Marion, and Franklin counties. Sirney called to say there was slow traffic due to an accident and that lunch would be a little late. But Matens had already arrived, so she unloaded the animals, and the children went out to the porch for her program.

A few minutes later, summer VISTA volunteer Kelsey Arbuckle, C’19, pulled up to the parking lot and hauled big, black, insulated food containers into the library. This year, librarian Scruggs asked the program to supply sack lunches to the people who come to this location: The meal contains a sandwich, a vegetable, a piece of fruit, and a carton of milk. Hot meals are also available through the program, but Scruggs found they weren’t as popular as the simpler option.

Soon enough, the lunches were distributed out on the front porch, and the children got down to the work of curating their sandwiches, some of them scrupulously removing the crusts from the bread, others picking out the tomato slice or, in one case, the cheese. Trades were made, and soon the kids were down to the serious business of eating lunch. Nobody, however, gave away their bags of chips.

And then it was time for the fun part. Matens was uncrating a snake. “Who wants to hold a snake?” she asked. And the hands shot up.

For Sewanee Dining, the meals program is a way to avoid laying off staff during the summer and, it turns out, is a big morale booster. For years, food service work at the University had been seasonal employment, ebbing and flowing with the academic calendar. But those summer layoffs created a real hardship for employees. In recent years, the University has moved to improve its food service by ending its reliance on an outside food contractor and making the workers University employees. Even then, there were still seasonal layoffs.

When Rick Wright learned about a U.S. Department of Agriculture program to support summer meal programs for children, he saw it as a way to help two groups of people—his employees who might want the extra summer work, and kids in the area who would benefit from having free meals during the non-school months.

There’s been an additional benefit, too, that wasn’t part of the plan. “We didn’t anticipate how the meal program would affect the staff in the dining hall,” Wright says. “It’s been such a morale-builder for my staff. They know some of the kids we’re feeding. ... They like being involved in something bigger than themselves.” The morale boost was obvious last summer, he says; this year, employees began asking in the spring if Sewanee Dining was going to participate again.

For Sirney, the coordinator of the program, her new job is a good fit. A 2015 graduate of Virginia Tech, she studied human nutrition, foods and health, and now she’s learning about “the reality of what it’s like to be in a low-income area.” Because she’s living right where she works, she has learned firsthand what it’s like to live in a “food desert,” where it can be a major undertaking to find a grocery store that sells fresh foods and vegetables. It’s been eye-opening, she says.

Sirney says one of the best things about her job is getting to know the community partners with whom she works to organize and maintain the complicated logistics of delivering fresh, healthy meals to 21 sites. She describes the folks she’s working with as “some of the most passionate people I’ve met.”

“I’ve been exposed to working with the community, and there’s so much effort on every front.”

One goal of the program is to help local organizations develop skills, information, and resources so they can conduct their own programs without VISTA involvement. There’s already been at least one notable success in that regard.

Last year, the Grundy County school system participated in the VISTA-led summer meal program co-sponsored by the University and the South Cumberland Community Fund. This year, however, the school system is running its own program, using its own resources, its own cafeteria, and its own staff. Because of this, the 2016 program was able to focus on other venues.

Despite the breadth of the effort, Sirney knows there are children who aren’t being reached by the program. Families have to travel to one of the locations where the program is being operated, and for some, transportation is a hardship. Sirney says she knows that some of the neediest children don’t have a way to get to the meal venues.

One other thing that she’s learned is that some children can be fussy about what they are willing to eat. The program is providing “beautiful, healthful meals,” she says, but kids are picky, and it can be pretty tough to get them to try something new. So far, she says, the kids are more accepting of the options served this year, which were altered to take into account what was learned from last summer’s program.

And there are plenty of children taking advantage of the meals: During the first five days of the program, Sirney says that they served about 350 breakfasts, 600 lunches, and 370 dinners. The program lasts for eight weeks. Meals are part of educational activities offered at each location in conjunction with the meal; kids who are participating may be there to have a sack lunch, but it is just as likely there are there because they like reading, or maybe even snakes.

The meal program is administered by Sewanee Dining and the University’s Office of Civic Engagement. Twenty-two community organizations, including churches, schools, public libraries, and other organizations partner with the program to provide space, develop programming, and enlist volunteer support for serving the meals and recruiting children. Eighteen summer VISTA volunteers—including four Grundy County High School students and 12 who are either current Sewanee students or recent graduates—help operate the program. The focus of the program activities this year is on reading and literacy.

For more information about the program, including locations of the venues and meal times, there’s a Facebook Page. The program coordinator, VISTA volunteer Liz Sirney, can be reached at 703.597.3782.