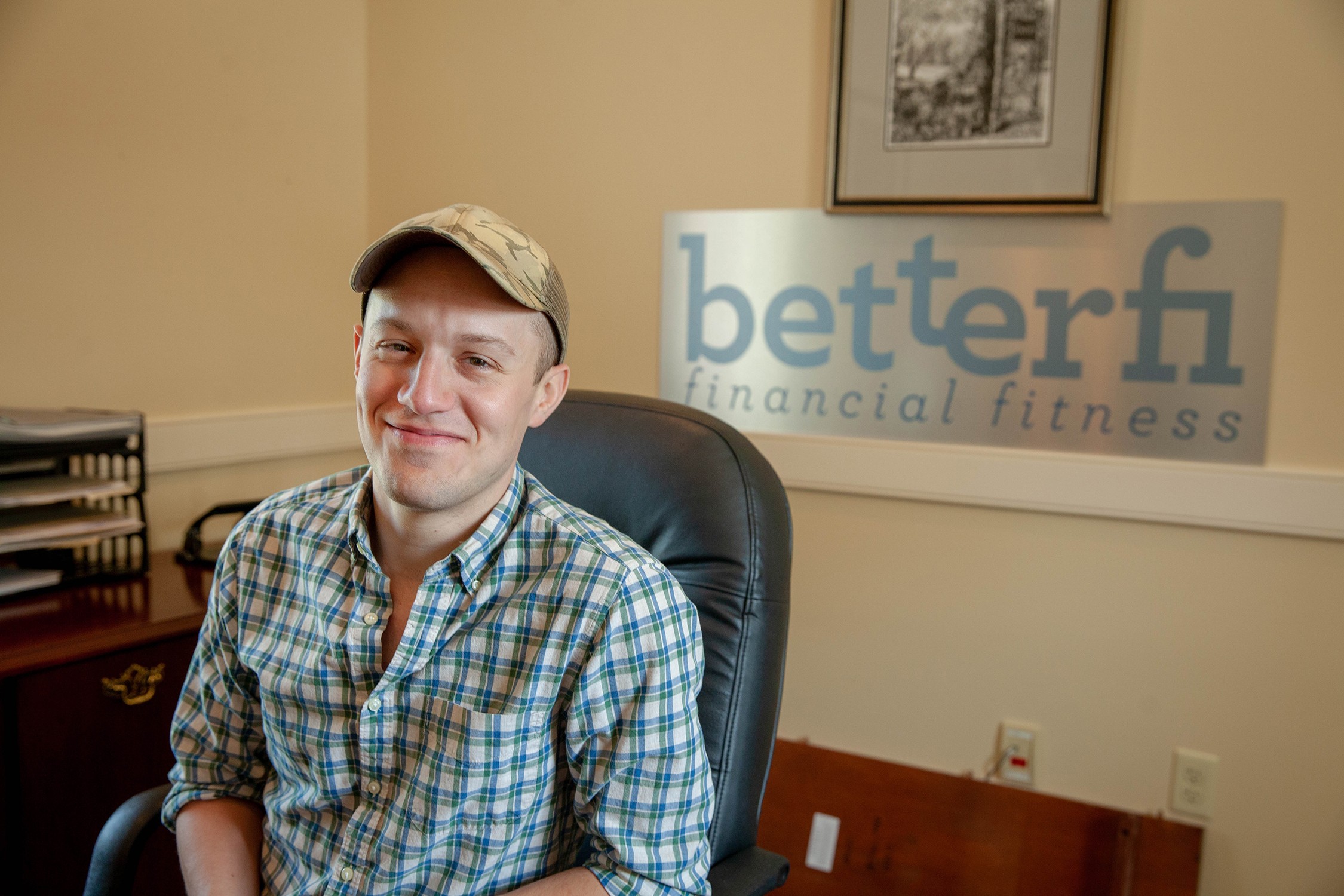 On May 7, 2018, the region’s newest financial institution, BetterFi, made its first loan, a $1,500 auto title refinancing that the client calls “a miracle.”

BetterFi describes itself as “a nonprofit justice enterprise” that has as its mission helping people in Grundy, Franklin, and Marion counties escape the cycle of high-interest payday and auto title debt and set them on the path to building financial management skills and decent credit scores.

The launching of BetterFi is a tangible result of the University’s Office of Civic Engagement Volunteers in Service to America (VISTA) program.

A little more than two years ago, incoming VISTA volunteer Spike Hosch, C’12, was assigned to the University’s Babson Center for Global Commerce, where then-Director Chip Manning, C’82, told him to figure out some way to create a more hopeful economic future for people struggling with poverty in the region. Manning added a caveat: Hosch should plan on sticking around to turn his research into reality.

Hosch returned to Sewanee after being recruited by his undergraduate advisor, Professor of Philosophy Jim Peterman, who now leads the Office of Civic Engagement. The two had kept in touch after graduation, and Peterman knew about Hosch’s résumé in microfinance development for the poor including work at Bangladesh’sGrameen Bank and a stint in Mongolia at XacBank managing a $20 million green energy portfolio, creating microfinance projects for woman-owned enterprises, and building clean latrines.

At XacBank, Hosch also helped implement a method for selling Mongolian carbon credits to U.S. companies and the Swedish government and using the credits to support the production of hundreds of thousands of high-efficiency coal stoves. The stoves have cut urban air pollution and helped purchasers save money by reducing the amount of coal they had to buy.

With his background, Hosch was well aware that one of the biggest challenges facing people in or close to poverty is the lack of access to short-term financing. The banking system is ill-equipped to step in—lending money to people with almost no assets is a very risky business. That’s one big reason for the proliferation of companies that specialize in making short-term, high-interest loans secured by car titles or post-dated checks that hit the bank the moment a worker’s wages are deposited. The loans often come with effective annual interest rates well above 200 percent, which is why these companies are often called “predatory lenders.”

While real data on just how much these lending options take off the top before applying monthly payments to principal pay-down, are guesstimates, one 2015 study put the figure at over $30 billion a year. Many people who take out one loan end up in a downward spiral that eventually ends in bankruptcy, or worse.

The model for BetterFi seeks to balance the risks of lending to the poverty-stricken with the potential reward to the community of better economic health for its residents. Now, Hosch is the company’s director and first employee. The new business just opened an office in Coalmont, housed in a disused branch of Tower Bank, a local community bank that is in negotiations with BetterFi for a longer-term arrangement.

BetterFi’s first client—we’re calling her “Millie” and deliberately obscuring some personal details to protect her privacy—is, like many other people who become clients of these operations, not wealthy. But until recently, she was a productive member of what’s called “the working poor.”

Millie, now 58 years old, spent her adult life as a professional cook (with a detour back in her younger days as a welder). In 2013, however, her life began to fall apart when she suffered three strokes in rapid succession. She qualified for Social Security disability because she could not work, getting a $1,000-a-month payment after decades of paying into the Social Security Trust Fund.

Millie lives in the Winchester area, and as soon as she was able, she resumed driving her well-used car to get around town for medical appointments, grocery shopping, and all the other activities many take for granted. But the car died.

Fixing the car wasn’t an option, so she decided to buy a somewhat newer car from a person she still describes as a “friend.” The friend told Millie she could take over the title loan—then about $800—at a local lender. She could handle the monthly payments by pledging part of her monthly disability check.

But she made a mistake—the “new” car had mechanical problems her friend hadn’t mentioned, so Millie turned to the lender for the repair money and was suddenly in debt for $1,500. Her monthly payment was $300.

Almost none of the money was going to paying off the principal. She eventually learned that the effective annual interest rate was about 240 percent. Before getting the new financing from BetterFi, Millie had already paid the title lender at least $3,300, and she still owed almost all of the principal.

In the best case, if she were still paying the title lender, she would have faced 18 months of additional payments to get the title to her $800 car. Most of the money would have gone to additional finance charges—$3,700.

“I was in a predicament,” she says with remarkable understatement.

Then, through luck and a longtime friendship with Dede Clements, the owner of Monteagle’s Edgeworth Inn, she heard about BetterFi. Clements—a senior banking executive in a previous life—has become the chair of the BetterFi board.

BetterFi isn’t giving anything away—Millie will be paying an interest rate of 24 percent (not 240 percent)—and her total finance charges will be $180. Her BetterFi loan will be paid off in six months, for a total out-of-pocket cost of $1,700. Additionally, her total monthly payments have dropped by more than $25.

The BetterFi loan will save Millie approximately $3,500.

Millie is still dazed at her change of fortune, and she says she is looking forward to the financial counseling that is part of BetterFi’s lending requirements.

“I’m still in shock about it,” she says. “Someone really cares. Now, I’m going to feel like I’m accomplishing something.”

Clements is just one of an impressive lineup of talent that comprises BetterFi’s board. Among the group are Sewanee alumni Nick Babson, C’68, and Jerry Adams, C’65 (both former University regents); Charline Butner, now a University staffer and former manager of the Sewanee office of Regions Bank; Sarah Lodge, director of business and finance at St. Andrew’s-Sewanee School; and David Shipps, C’88, the current director of the Babson Center, among others.

Babson, one of the co-chairs of the University’s ongoing $250 million capital campaign, says he’s confident in BetterFi’s business model, and he expects the business to have a positive cash flow quickly. Already, BetterFi has raised about $50,000 for startup costs and initial loan capital.

“I think BetterFi is important for the development of the region of which Sewanee is a part,” says Babson. He, like Clements, is hoping that Sewanee alums and other friends of the South Cumberland region will decide that they want to be a part of building BetterFi into a regional and national testbed for a replicable and sustainable alternative to the high-fee, high-interest payday and title loan operations that vacuum up money that could otherwise be part of local and regional economies.

Members of BetterFi’s board have invested in the project, as has a local charitable trust that wishes to remain anonymous. Several other regional funders are lined up to add cash to the company’s loan pool as soon as final approval for BetterFi’s IRS nonprofit status comes through.

Meanwhile, Clements is actively inviting friends of Sewanee and the South Cumberland region to help BetterFi build the cash it needs to build out its innovative business plan and turn the enterprise into a widely replicable model. “Please,” she says, “join us.”