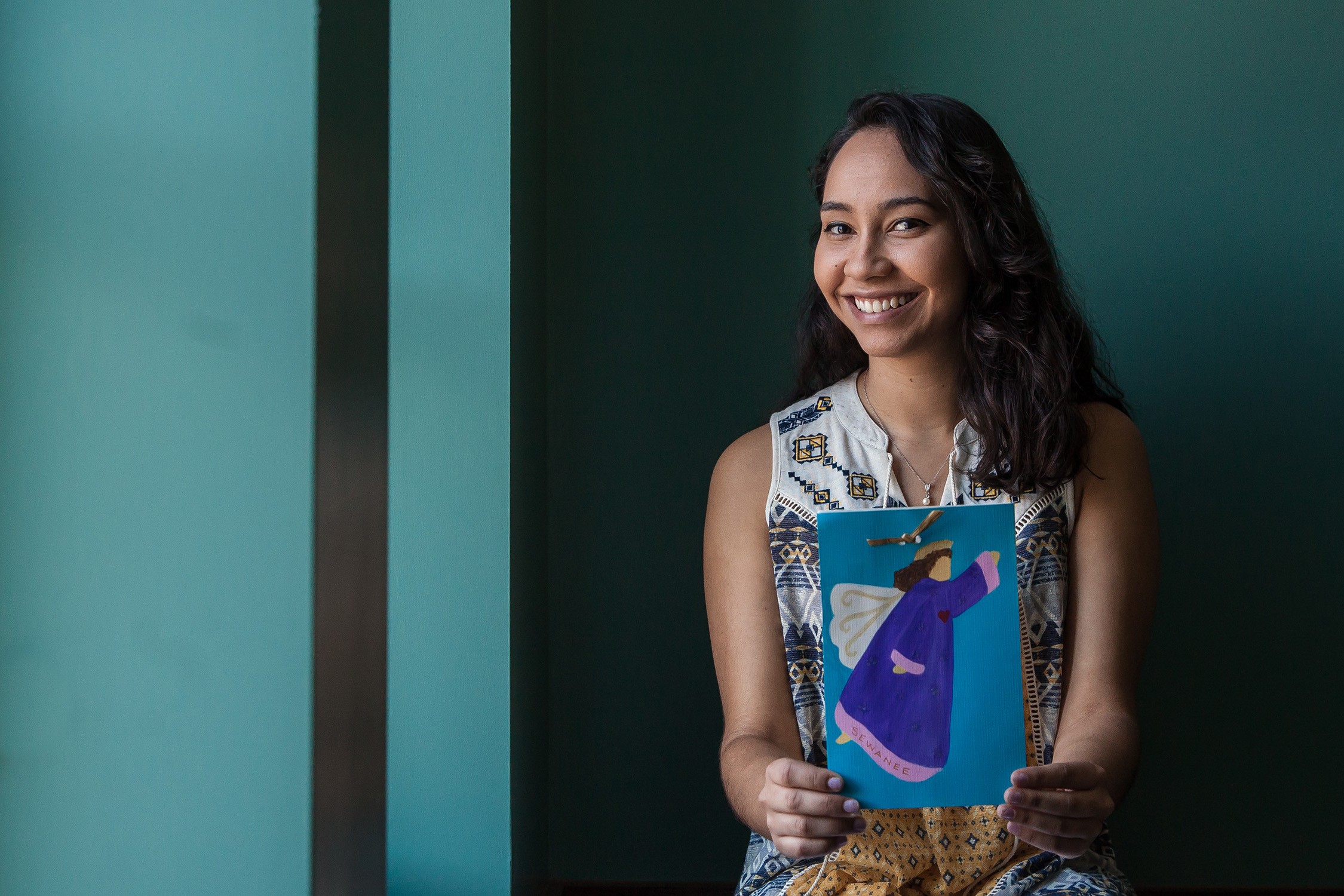 In the days before commencement, we asked 14 graduating seniors to share one treasured object they’re taking with them when they leave the Mountain. 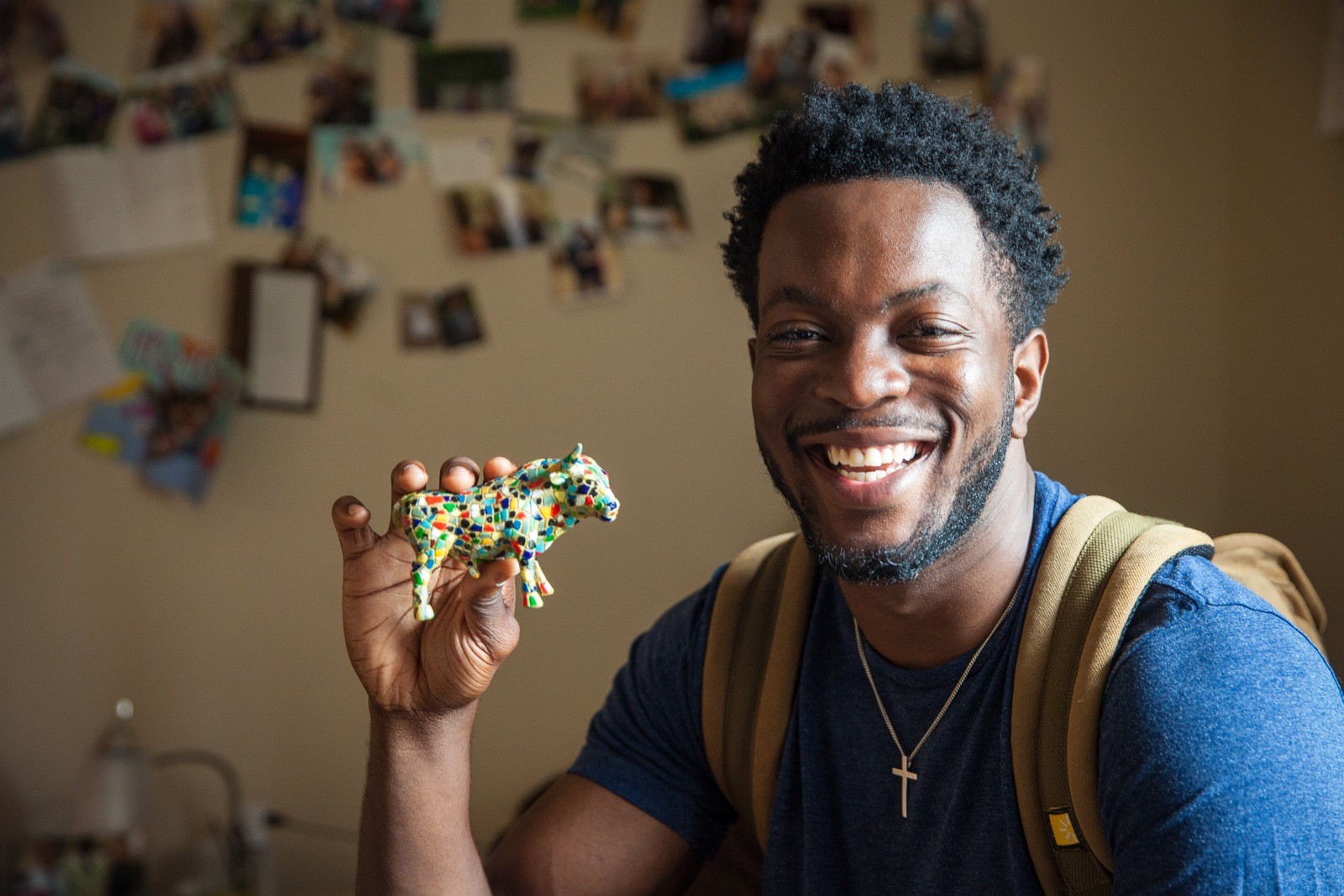 “I got this bull when I was studying abroad in Spain last year after we visited a farm in Andalusia to see how bulls are raised for bullfighting. My experience in Spain meant everything to me. It encapsulated everything we’re doing here at Sewanee—taking classes outside your comfort zone, immersing yourself in another culture, learning how to communicate in different ways, learning to think critically. The bull will remind me of the importance of all that when I’m in graduate school next year. What else does the bull mean to me? Be bold and be brave, man.” 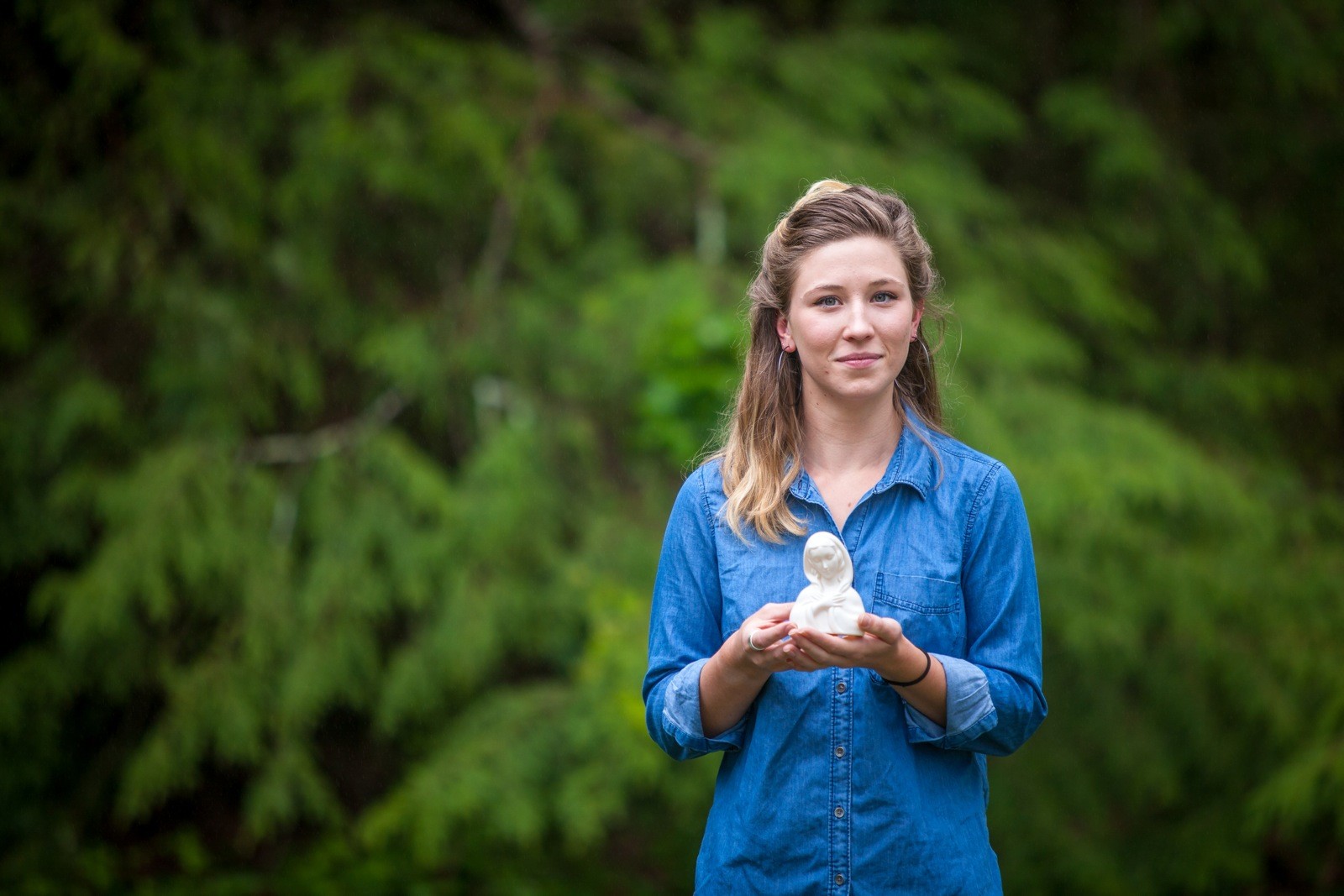 “I was working on a project about Sewanee history when I met James Gipson, C’66, whose family has been so important to the University and who knows tons about local history. It was amazing to meet someone who has invested so much time learning and sharing local history because of its personal significance to him. I’m interested in public history, where the issue of accessibility is huge, and James tries so hard to make Sewanee history accessible to people. James gave me this porcelain Mary figure and told me that it was made by Peggy Rhys, who used to teach ceramics at St. Andrew’s School in Sewanee. When he gave it to me, he said, ‘You’ll have a Sewanee object nobody else has. You can’t buy that at the bookstore.’” 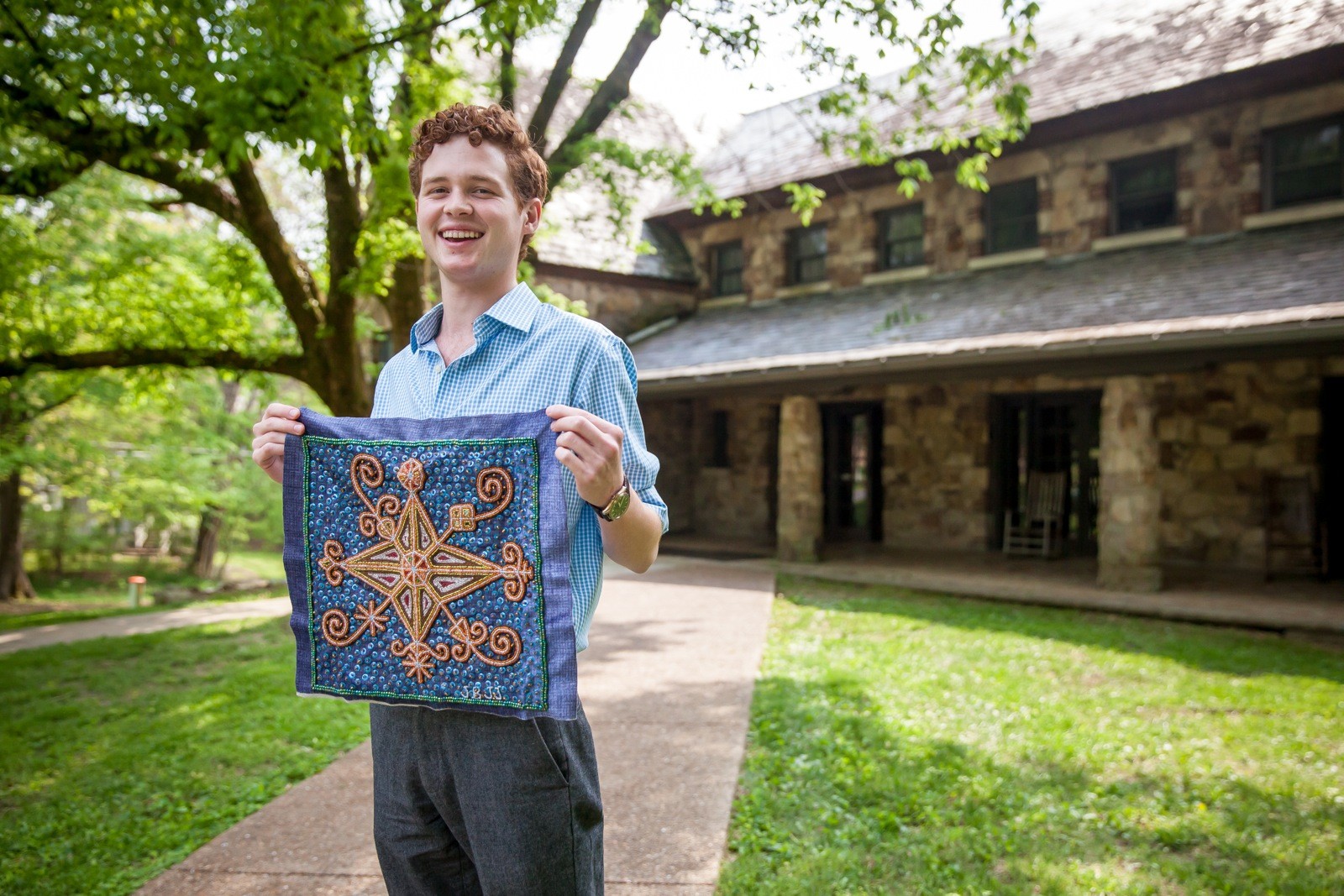 “I fell in love with Haiti the first time I went, spring break my freshman year. Since then, I’ve spent two summers there and made seven trips total, working on Sewanee’s Zanmi Kafe project. When I came to Sewanee, I never would’ve guessed that I’d become so deeply involved with another country, never knew I’d leave Sewanee speaking Haitian Creole. When I left for Haiti for the seventh time, I knew I wanted to get something to represent all the time I’ve spent and the work I’ve done there. So when I was walking through a little Haitian Voudou shop in Port-au-Prince and I came across this intricately beaded Voudou flag, I thought, 'This is it'—something beautiful, something I won’t outgrow.” 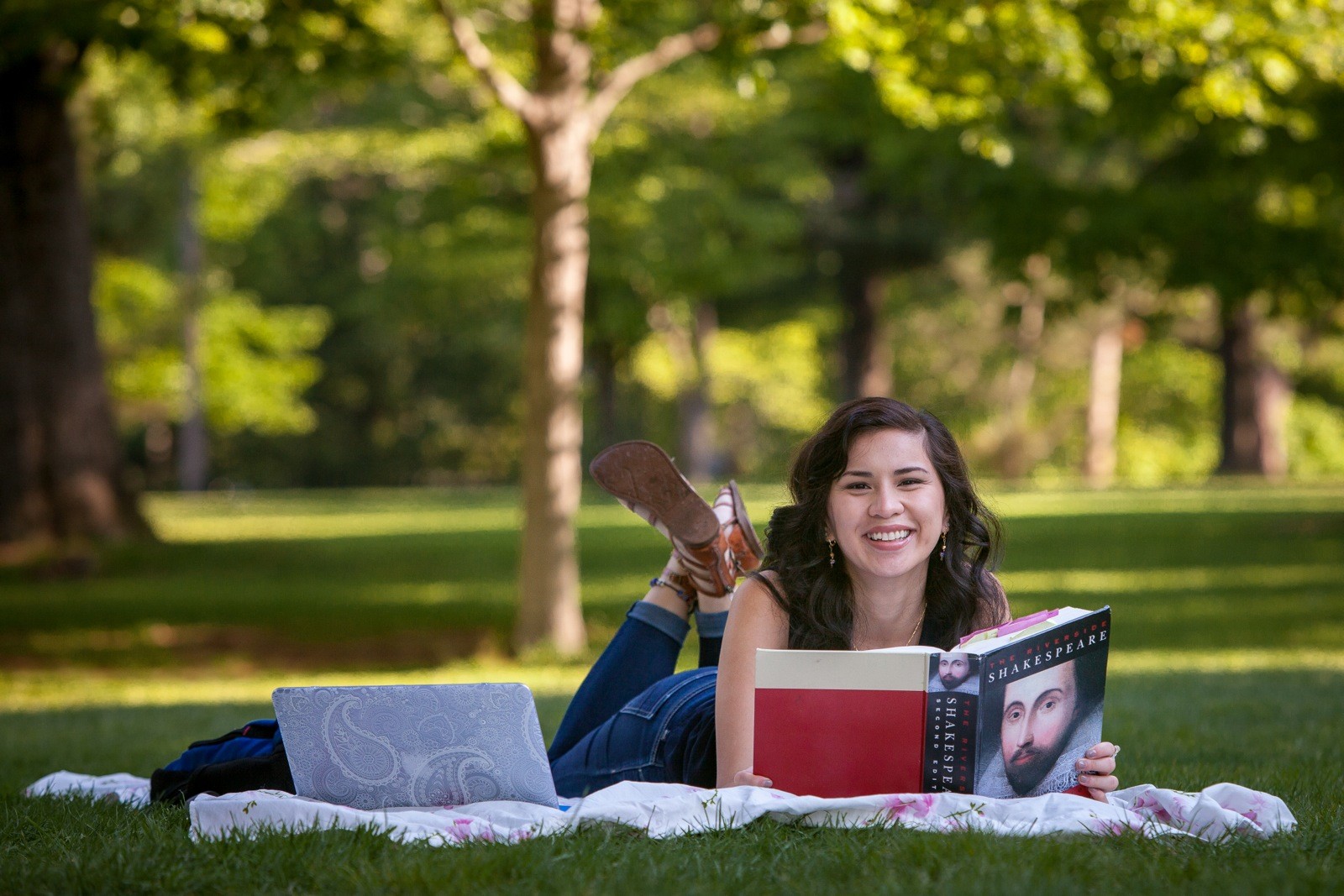 “I know it sounds cheesy or like something every English major would say, but I can’t imagine venturing into the world after college without my Riverside Shakespeare. Everything that exists in the range of human emotion is in these pages and I refer to it all the time. I’m really interested in love and relationships, and I always look at Beatrice and Benedick from ‘Much Ado About Nothing’ as an ideal couple. They have some history and they constantly challenge each other, but they’re able to overcome past hurts with these little jabs that are funny and not hurtful. I love that Beatrice is an independent, talkative, intelligent woman who shows that you can be all those things and still find true love.” 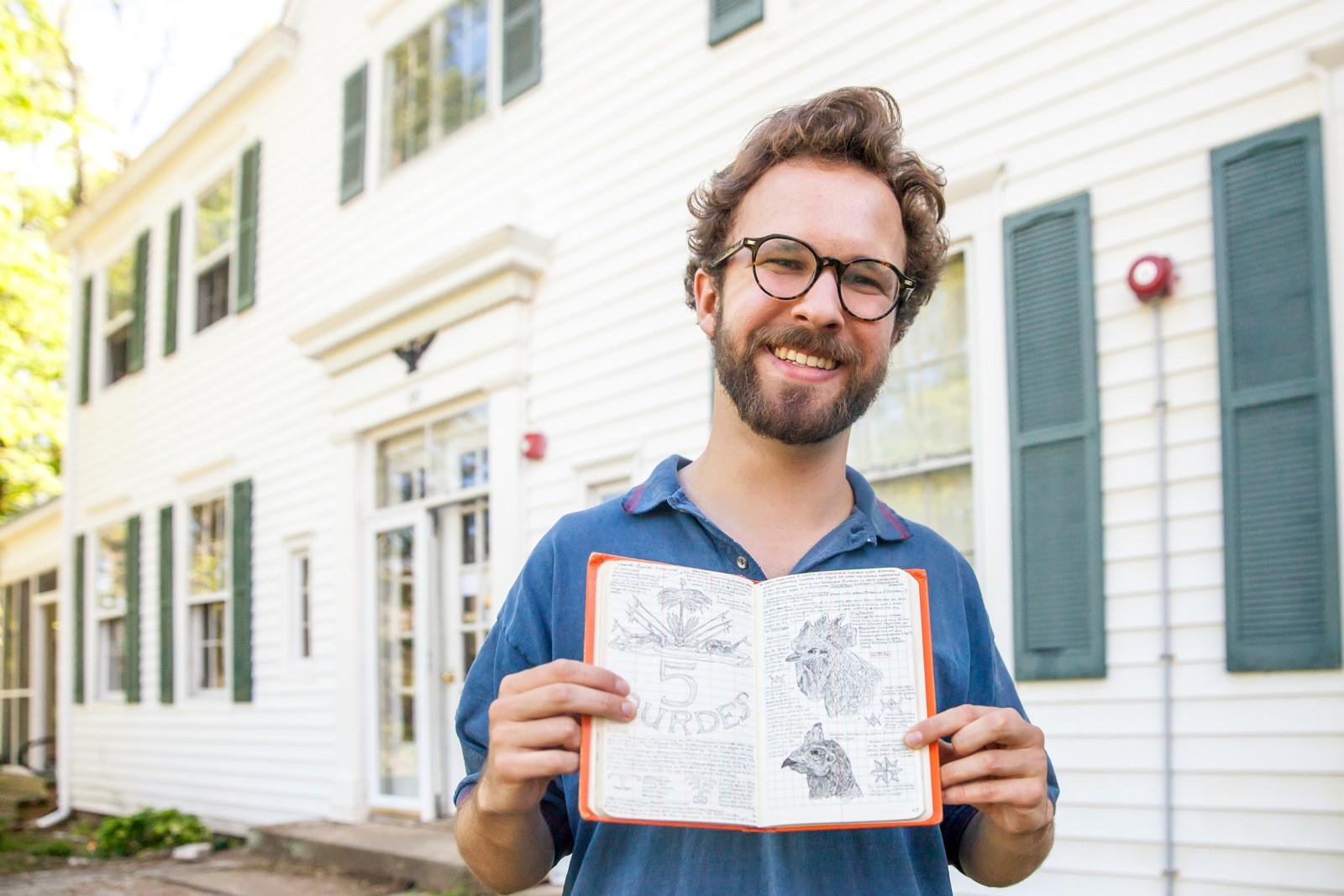 “I started keeping notes and drawings in fieldbooks for my geology and forestry classes, and then decided to use them to document my travels, too. It’s just a way for me to process where I am in the world, both geographically and personally. After I leave Sewanee, I’ll be able to pull one of these down and remember in a really tactile way what it was like to stand at Morgan’s Steep, to rock climb in Colorado, and to hike down to the Big Sink in Lost Cove with my sedimentology class. I think they’re the best souvenirs I could have.” 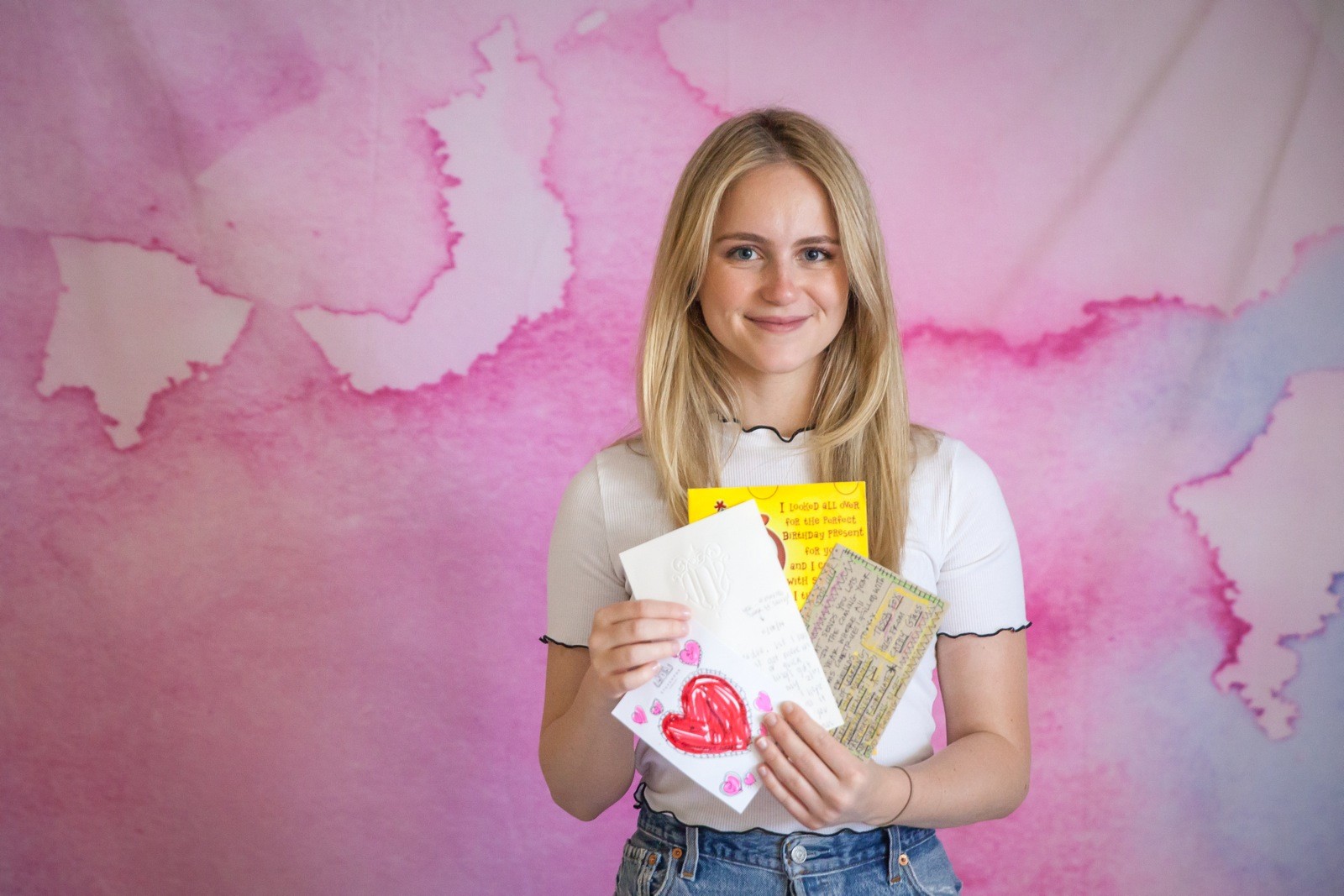 “I’ve got this giant Ziploc bag full of stuff—letters from friends, cards from my family, random Post-It notes, little works of art from my father, my nametag from freshman orientation. I’ve been collecting these things since I got to Sewanee, and looking back at them reminds me of all the best parts of my experience here. I really like re-reading the letters my younger brother and sister sent when I was a freshman. I didn’t know what college was going to be like at all, and their letters helped ground me. Now we’re coming full circle because my siblings—they’re twins—are coming to Sewanee next year, and I’ll be the one writing letters to them as freshmen.” 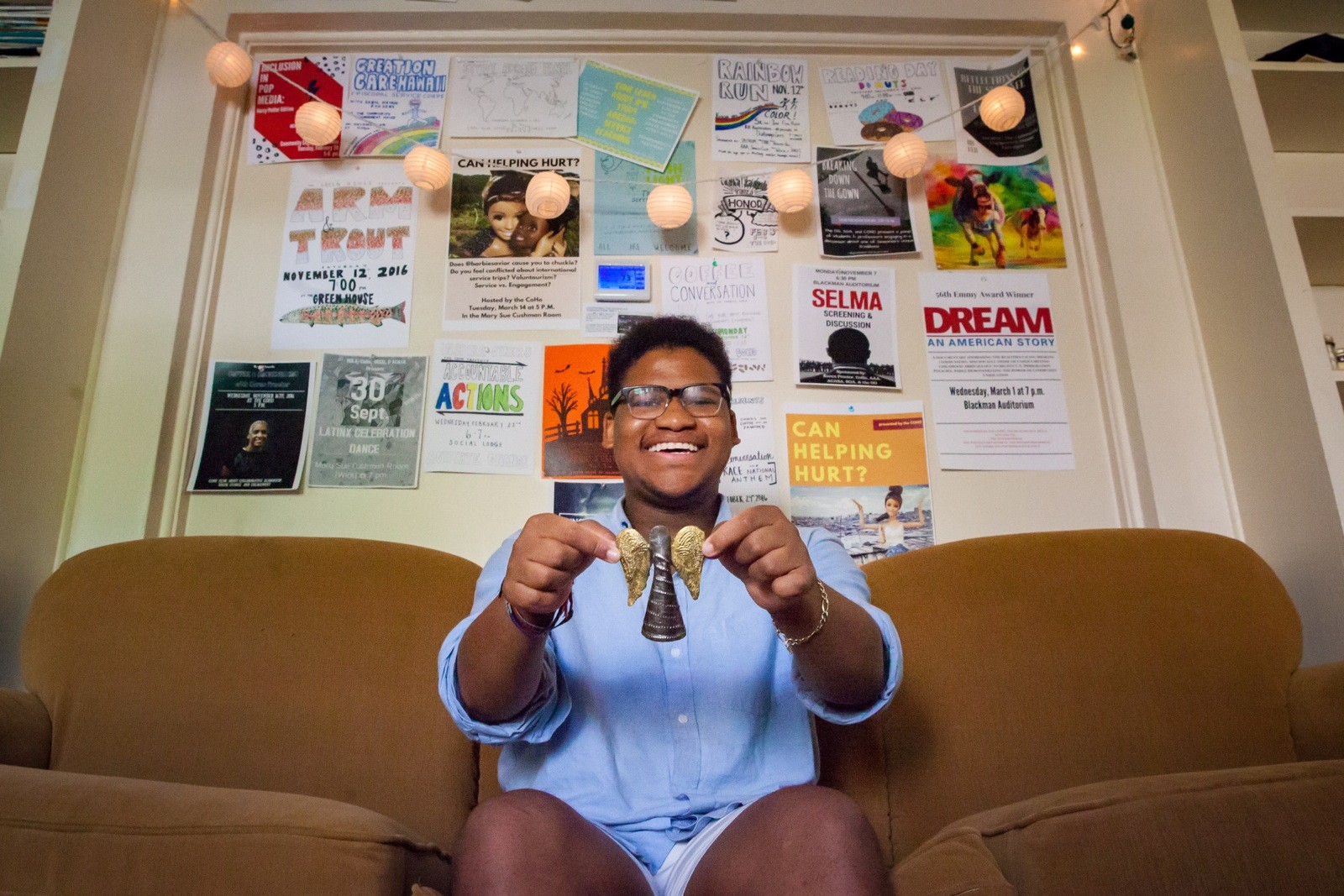 “My friend and Posse sister Ena Aguilar brought this little angel back from Haiti for me. We’re both international and global studies majors and we’ve both been pretty involved with civic engagement opportunities at Sewanee. When she gave it to me, she said, ‘I know there are angels in Sewanee, but I want you to know there are angels everywhere, locally and globally.’ The angel will always remind me of tapping the roof when I leave the Domain, but also of the commitment we’ve learned at Sewanee to engage and be global citizens, wherever we happen to be.” 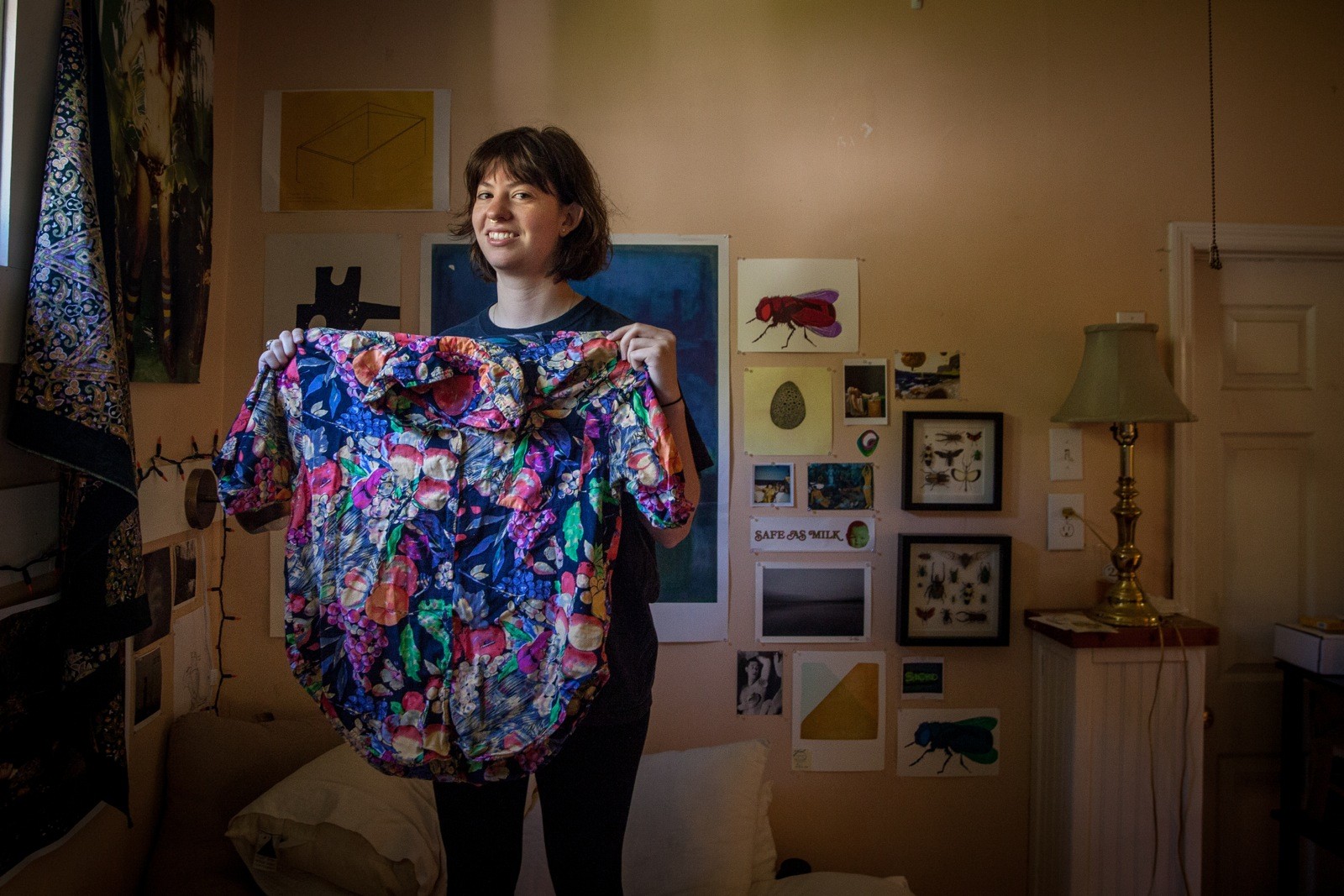 “When you’re a freshman going through the SOP’s PRE program, the unwritten dress code for Casino Night—on the last night of PRE—is thrift-store tacky. So, when I was doing it, my PRE family drove down to South Pittsburg to shop at a thrift store there, and that’s where I found this crazy fruit shirt that I’ve held onto ever since. My friends and I have passed the shirt around for four years, and you’ll often find one of us wearing it for a party weekend, shake day, or another appropriate occasion. My friend Paul recently wore it to a formal. Sometimes I wonder: Who bought this shirt when it was new? And what were they thinking?” 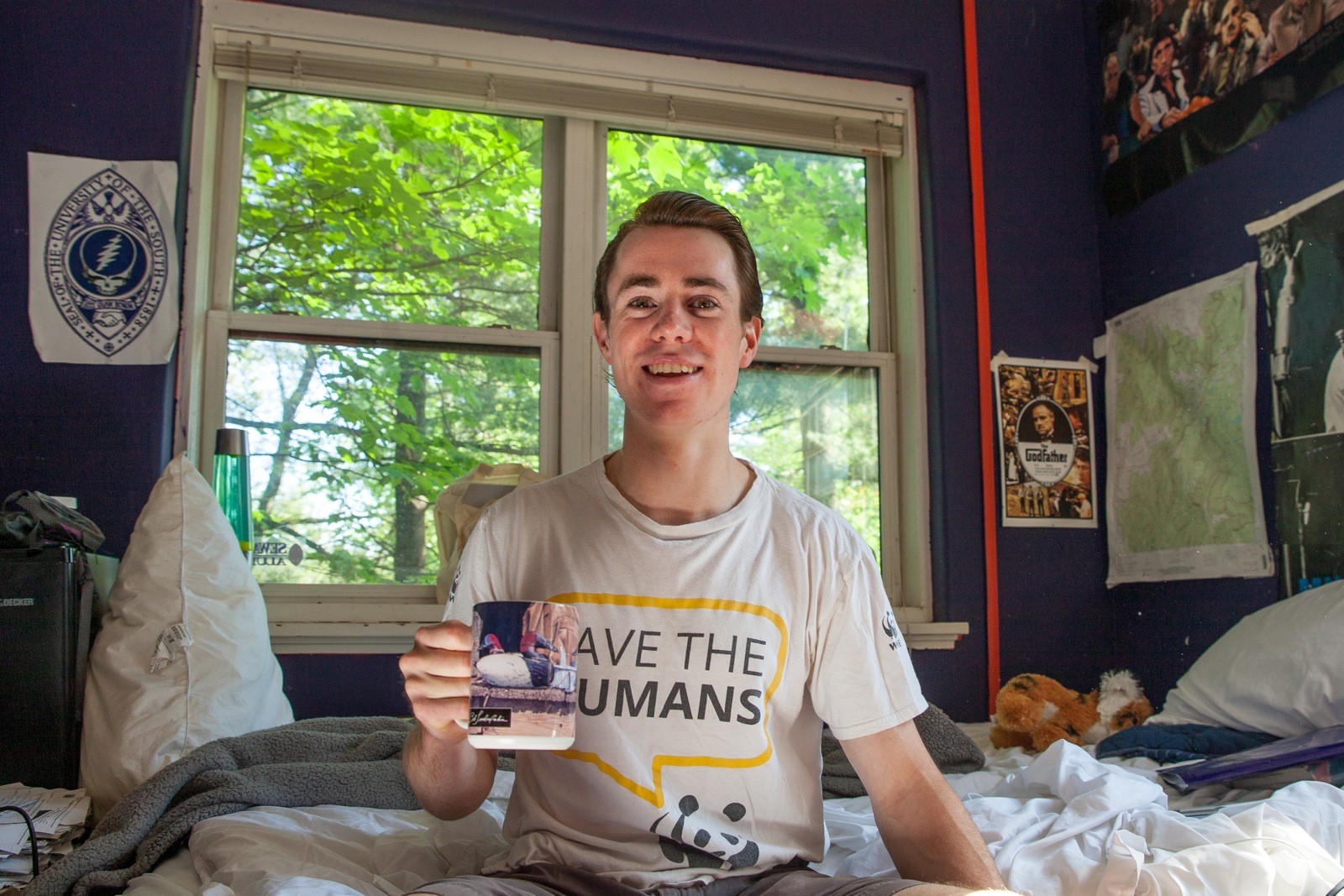 “I bought this mug at the Hospitality Shop earlier this year and it’s been on all my adventures since then—several camping trips and an SOP spring break climbing trip to Colorado. I make a cup of hot tea and take it to class every day, too. Recently, some friends and I were thinking about something: What can we do so that we can just have good conversation with friends, seniors who are about to leave, and get down to some meaningful things. So, we thought, let’s just drink tea together at night. We’ve had our tea parties once a week for the past couple of months. When I leave Sewanee, I’ll take the mug out, brew a cup of tea, and think about how amazing this place is and the opportunities I had just to sit down with some friends in our final days here and focus on nothing but good conversation and tea.”

“I’ve always known I had angels. Growing up undocumented without any safety nets, my family relied heavily on the connections we had through church and friends. My first Sewanee angel was a priest from my diocese in Miami who is a Sewanee alumnus. Before I got permanent-resident status, I didn’t know if I could even apply to college, but he called Sewanee’s admissions office and told them my story, and they told him to encourage me to apply. Since I’ve been here, I’ve found so many more angels—faculty, staff, students, and community members who have helped me in a million different ways. My mom started painting Sewanee angels on cards for me to use to thank everybody who’s helped me. I have 40 of these, each one handpainted and unique. Now I’ve got a lot of thank-you’s to write.” 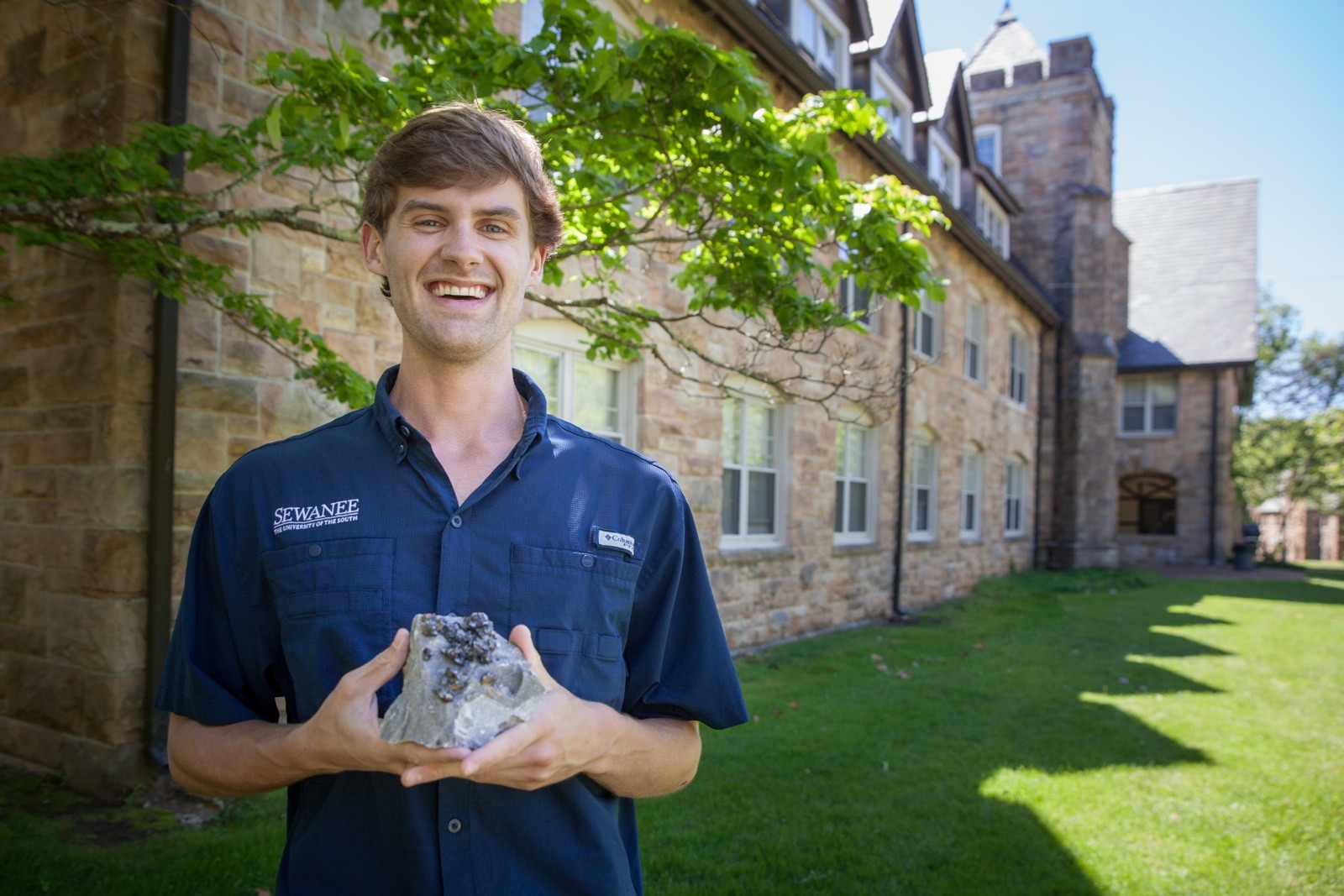 “Halfway through this semester, the senior geology majors learned that Dr. Shaver, one of our favorite professors, would be retiring at the end of the semester. A couple of weeks ago, he sent us an email saying he was cleaning out his house, found some rock samples, and wanted to give them to the graduating majors. I picked out this chunk of drusy quartz with beautiful sphalerite crystals. His gesture meant the world to me and, although it’s just a rock, it will always remind me of my time as a geology student at Sewanee and the great professors who helped push me and guide me to where I am—two weeks from graduating and two months from entering graduate school to continue my geologic education.” 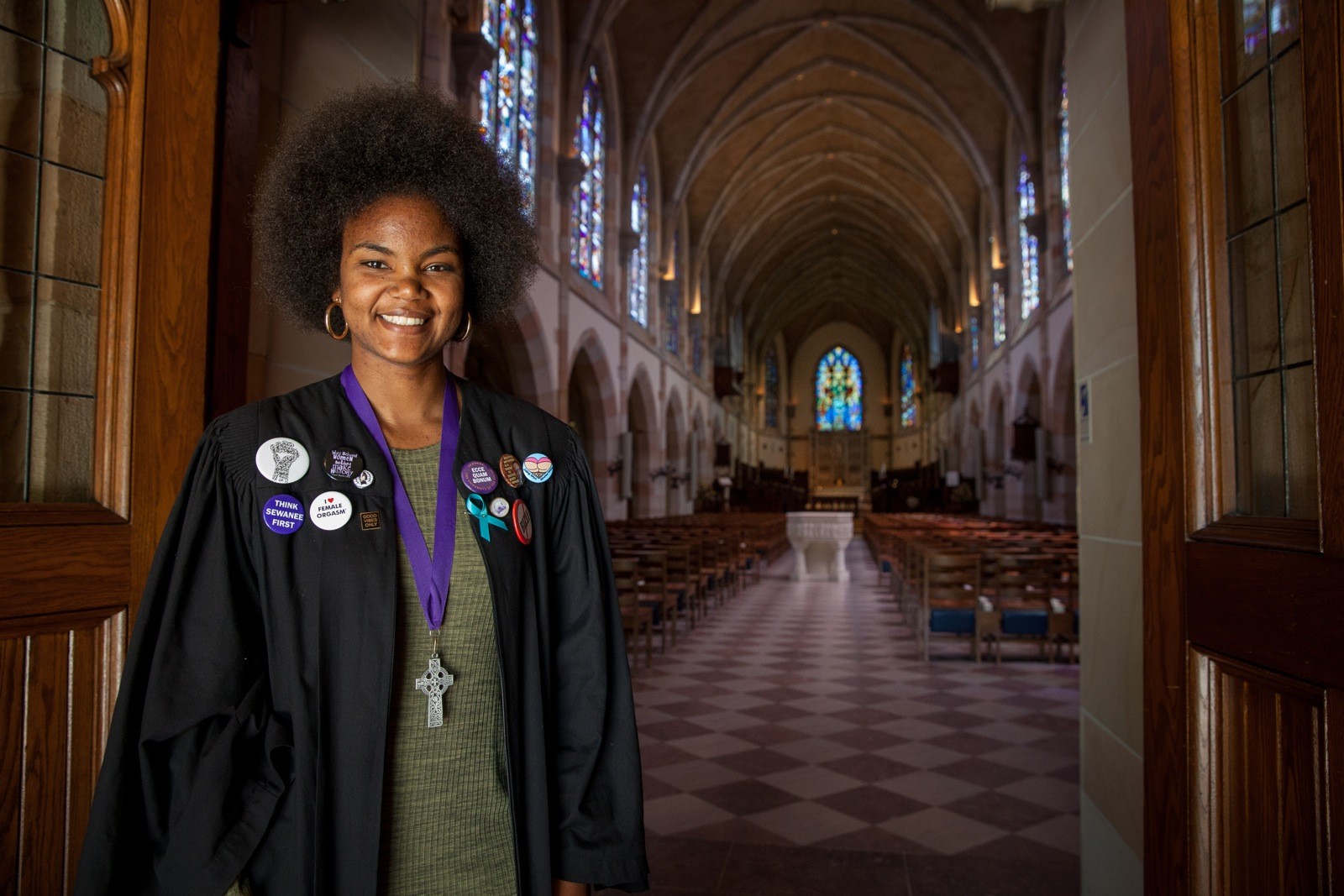 “My parents are both Episcopal priests so the church has always been a big part of my life, but serving as a sacristan in All Saints’ Chapel for four years has broadened my understanding of Christianity and even what it means to be a human being. Sacristans are allowed to wear the cross only after they finish a semester of training, so it’s really meaningful. It shows that you’re a member of a community of service. When I leave Sewanee, the cross will remind me of all the moments that have changed my life in this chapel and, I hope, will continue being a motivation to serve, both in the church and outside of it.” 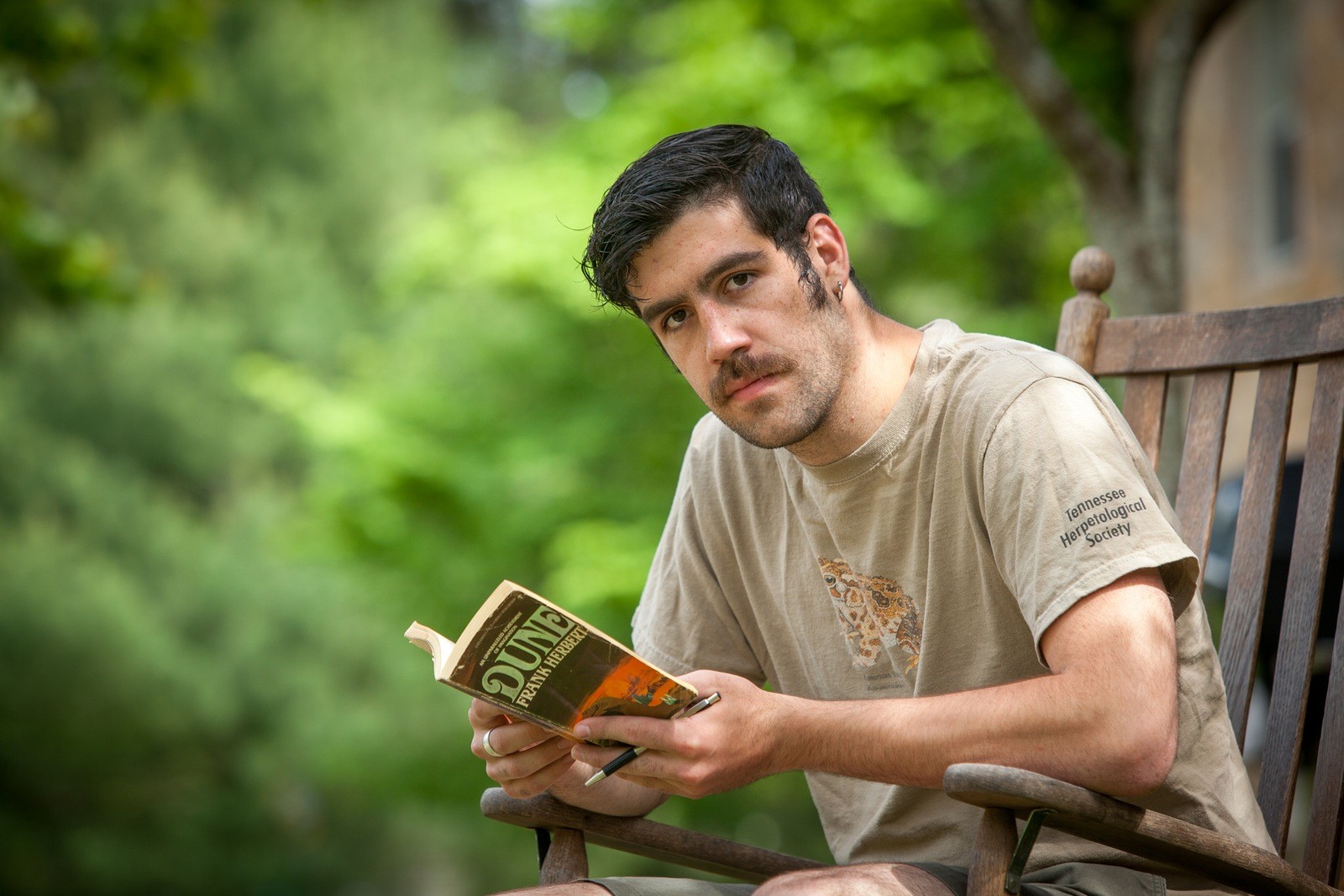 “Between sophomore and junior year, I worked as a research assistant in Sewanee. That was a pretty big summer for me: I was at a crossroads, relationship-wise, I was starting some important new friendships, and I discovered Frank Herbert’s Dune. As an ecologist, the book really resonated with me because one of its big themes is the scarcity and importance of resources. Water is sort of a deity in the book and something to be very much respected, so when I took a class in freshwater conservation, Dune was just playing on repeat in the back of my mind. Plus, the book includes one of my all-time favorite lines: ‘Deep in the human unconscious is a pervasive need for a logical universe that makes sense. But the real universe is always one step beyond logic.’ It’s just a more flowery way of saying ‘shit happens,’ but it’s sort of reassuring to me.” 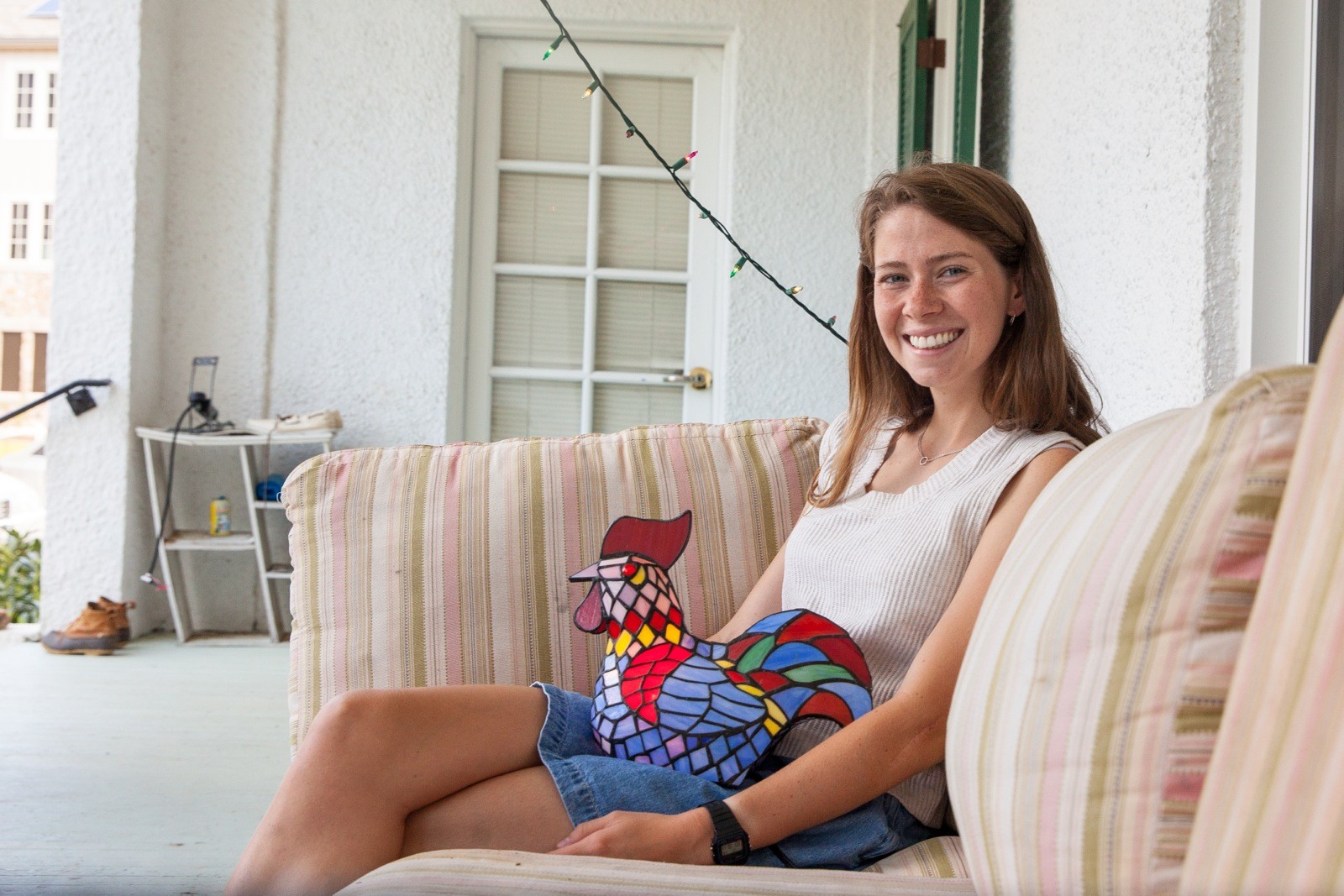 I paid $10 for this chicken lamp at a community yard sale in Sewanee my sophomore year and he’s been by my side ever since. He sits right next to my bed, and he’s the first thing I turn on at night and the last thing I turn off before bed. Some of the most important relationships I’ve found here are not with my peers and professors but with other community members I’ve gotten to know through my work in community engagement. Those relationships are so cherished right now, and they’re going to be the hardest goodbyes. The chicken was part of this community before I was, so he’ll always represent that for me. Sewanee has taught me how to build a community for myself and how to do that anywhere I go. I’ll take that lesson with me for the rest of my life.